The Many Lives of Demogorgon, From Scribal Error to 'Stranger Things' - Atlas Obscura
Want to see fewer ads? Become a Member. 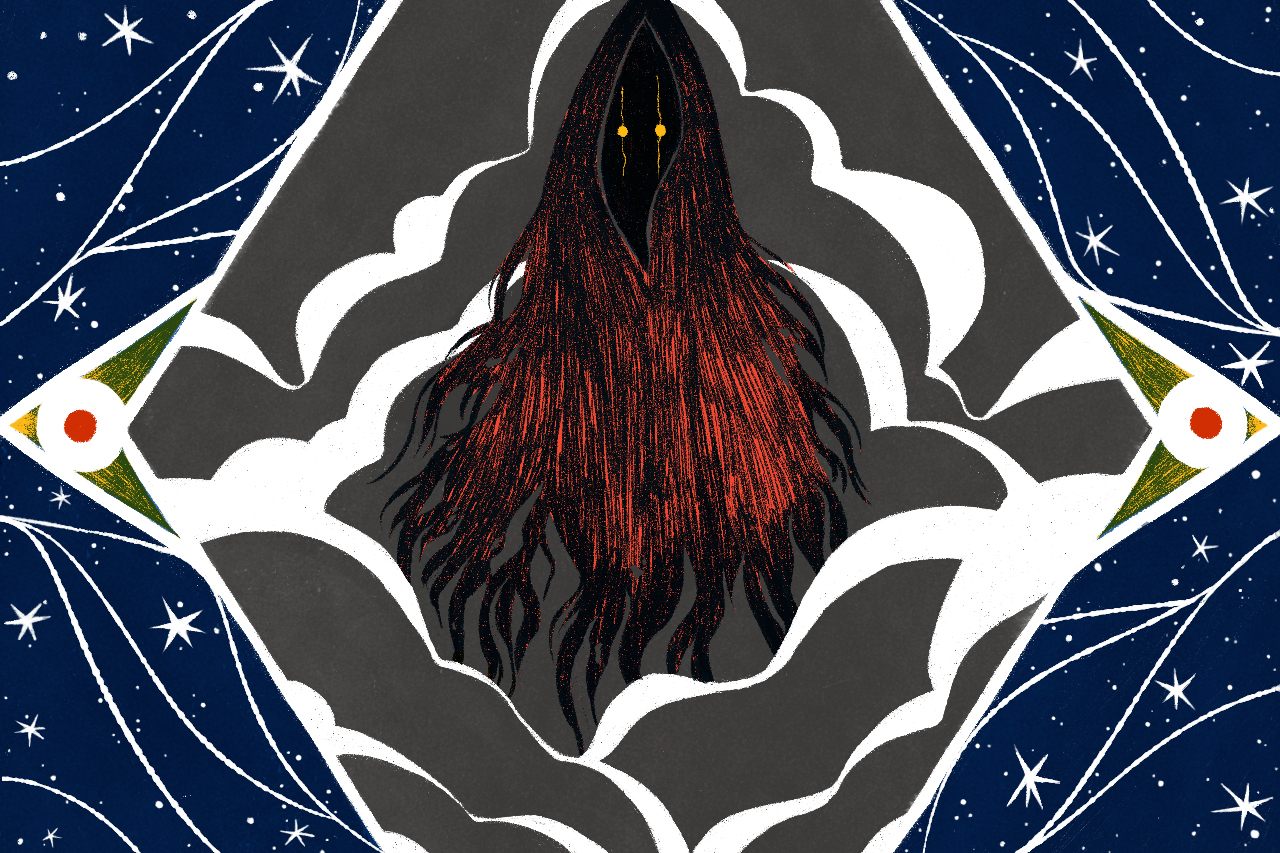 Demogorgon was never a deity in Greek or Roman mythology. In fact, “Demogorgon” wasn’t even a real word. The character's popularity dates back to the 1300s, when he began appearing in Latin literature. CARMEN DEÑÓ

Spirits Week
See More
This week, we’re looking at the ways that ghostly and ghastly tales evolve—shifting shape, but never quite dying out. Previously: the Flying Dutchman’s imperial path to the big screen.

In the second act of Prometheus Unbound, the 1820 lyrical drama by Percy Shelley, two sisters embark on a quest to the underworld. They want to pay a visit to Demogorgon, “the supreme Tyrant” who rules over phantoms, men, and beasts, and persuade him to help out an unlucky fellow named Prometheus. When the sisters finally find Demogorgon, in a shadowy cave, all they can see is a “mighty darkness” that throws off “rays of gloom.” Surprisingly, he turns out to be a rather chatty and cooperative creature, and agrees to help his visitors. At the end of the play, he even gives a speech in praise of love (so much for supreme tyranny).

Shelley didn’t invent the fearful figure of Demogorgon. He was riffing on a character who had already stalked through 500 years of literature—from Giovanni Boccaccio to John Milton to Edmund Spenser—and would eventually rear his ugly head in Dungeons & Dragons, the role-playing game, and the recent Netflix show Stranger Things. Many writers considered Demogorgon to be the father of Greek and Roman gods; the word “Demogorgon” resembles two ancient Greek words—dêmos (meaning the people) and Gorgon (referring to Medusa and her two monstrous sisters, whose gaze could turn the viewer into stone).

Yet Demogorgon was never a deity who loomed over Greek or Roman mythology. In fact, “Demogorgon” wasn’t even a real word. His popularity actually dates back to the 1300s, when he began appearing in Latin literature in and around Florence. In the words of the late historian and mythographer Jean Seznac, “Demogorgon is a grammatical error become a god.”

Demogorgon seems to have begun his life as an unnamed god in ancient Latin poems. “In Lucan’s Latin epic poem the Pharsalia, the witch Erichto forces some infernal deities to do her bidding by threatening to invoke the terrible god whom even they fear,” writes James K. Coleman, an assistant professor of Italian at the University of Pittsburgh, in an email. “Then in Statius’s Thebaid, the prophet Tiresias refers to the terrible ‘Lord of the Triple World,’ whose name he refuses to speak.”

Because these poets don’t actually name the god they’re talking about, later writers were able to impose their own interpretation. According to C.S. Lewis, a medieval scribe read the Greek word demiurge, which was Plato’s name for the creator of the universe, and wrote the nonexistent word Demogorgon. “This is perhaps the only time a scribal blunder underwent an apotheosis,” Lewis wrote in his book about medieval and Renaissance literature. According to Coleman, this all happened sometime in the Middle Ages.

Demogorgon properly joined the pantheon in the 14th century, after the Italian writer Boccaccio declared him the father of the Greek gods. Boccaccio was not especially good at ancient Greek, Coleman says—he lived near Florence and wrote mostly in Italian vernacular, like his hero Dante—but he loved to show off by referencing Greek texts. He presumably came across the erroneous name Demogorgon and took it as gospel. Boccaccio’s version of the deity, in his hefty Genealogy of the Pagan Gods, is a “shadowy figure, enveloped in clouds and gloom that mask any more specific features,” Coleman writes. “His words, too, are hard to discern.”

Once Boccaccio promoted the apocryphal Demogorgon to the position of top deity, he seems to have gone the Italian Renaissance equivalent of viral. The scholar Marsilio Ficino and several local poets—Ugolino Verino, Matteo Maria Boiardo, and Ludovico Ariosto—all wrote about him. In 1565, a Demogorgon figure even marched through the streets of Florence during a Medici marriage procession. (That’s not to say that everyone was down with Demogorgon, however: The poet Giglio Giraldi noticed the scribal error way back in the 1500s.)

Boccaccio and the writers who read him are probably to blame for English-language appearances of Demogorgon, Coleman says. After cropping up in such works as The Faerie Queen and Prometheus Unbound, he wriggled his way into popular culture. Eldrich Wizardry, a 1976 guidebook for Dungeons & Dragons, describes Demogorgon as a two-headed demon lord who slithers around on tentacles.

In Stranger Things, the newish Netflix show about the misadventures of some Indiana kids, a tadpole-like Demogorgon shows up in a suburban garbage can. After devouring a house cat, he grows into a humanoid monster with tooth-covered “petals” for a head. (Unlike Shelley’s Demogorgon, this one is not much of a talker. He prefers to hiss and spit before he eats you.)

Coleman believes that Demogorgon owes his enduring popularity to the vague and ominous descriptions in the earliest texts about him. “The fact that the ancient texts supply no detailed physical description of this dreaded underworld god allowed later authors and artists to let their imaginations run free in visualizing the deity they called Demogorgon,” he writes.

Ironically, Coleman adds, Demogorgon’s nonexistence is exactly what makes him useful to scholars today. When historical texts discuss classical gods like Apollo and Hades, it’s difficult to figure out their source material: They could have been inspired by any number of Greek or Latin writings. But when Demogorgon appears, it’s possible to trace him all the way to the source.

Ghost Nets Haunt the World's Oceans, Hunting Beyond the Grave

Monsters Are Everywhere in the Bible—And Some Are Even Human

Scholars are learning what bestial and depraved characters can reveal about ancient authors and cultural attitudes.
culture

The digital descendants of 'yōkai' can be spotted in many Japanese games.
beer

The Nain Rouge has been stirring up trouble—and maybe generating some goodwill—for more than 300 years.
Video