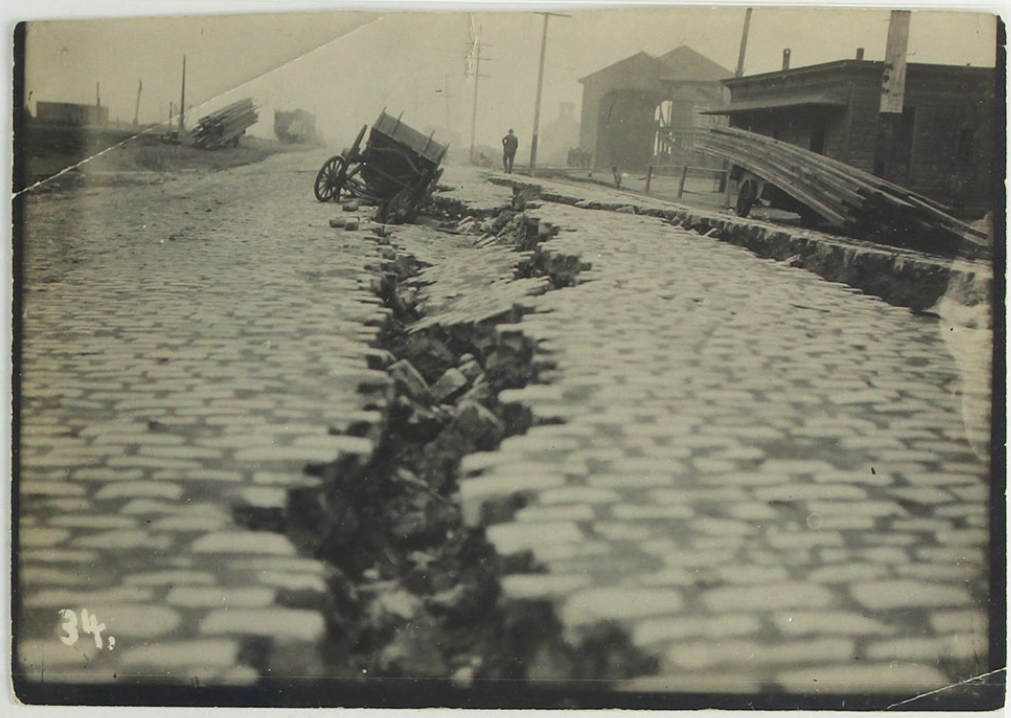 The quake lasted only about a minute, but the devastation reshaped the city. Courtesy of Swann Auction Galleries
In This Story
Place

The ground shook for one long, terrible minute. In the early morning of April 18, 1906, San Francisco, California, convulsed with an earthquake that would destroy much of the city. While geologists’ estimates of the quake’s magnitude vary a bit, it was immediately and obviously clear that the temblor was strong and shocking. “One side of the country moved north, while the other side stood where it was, and there came a tear through the entire San Mateo county north and south,” remarked Hermann Schussler, chief engineer of the Spring Valley Water Works, in a later court testimony.

The see-saw motion splintered roadways and kindled fires that burned for days. “If San Francisco had been at or near the ‘fault’ line,” Schussler added, “there would not have been anything left of it.” As it was, the effects were vast and devastating. By the time the fires were out, hundreds or thousands of people were dead, nearly half of the city’s population was homeless, and tens of thousands of buildings had been scorched or toppled to the ground—particularly those built atop the soft soils around the Bay. Photographers roamed the changed streets with their cameras in hand, documenting the smoldering rubble and the sprawling tent city in Golden Gate Park, where the military had set up emergency accommodations for the residents who found themselves unmoored.

Several dozen of those first-hand images are up for sale this week at Swann Auction Galleries, where appraisers expect the lot of 40 silver prints to fetch somewhere between $2,000 and $3,000. Some of the images show clouds of smoke billowing into the sky, others show slumping homes or scorched hulls of buildings, and at least one—captioned “relic seekers after the fire”—documents people salvaging or plundering the remains of the blazes.

In the decades after photographers chronicled the harrowing conditions on Civil War battlefields, “commercial and amateur photographers recognized the value of images, especially those that documented a once-in-a-lifetime event,” says Daile Kaplan, the gallery’s director of photographs and photobooks. “These particular photographs were knowingly shot as documents or records,” Kaplan says.

But it’s not entirely clear who captured them. One print is credited to Willard E. Worden, a Bay Area transplant by way of Philadelphia, where he had been working as a newspaper illustrator. (Once Worden made the leap behind the camera, he mostly trained his lens on seascapes and landscapes, Kaplan says.) The other photos are unattributed, but in light of their different formats and paper stocks, Kaplan suspects that they were shot by multiple photographers.

As the city dusted itself off and began the process of rebuilding, investigators got to work understanding exactly how the destruction had happened in the first place. The quake “spawned a flurry of scientific investigation,” according to the U.S. Geological Survey, and researchers’ comprehensive reports “demonstrated the importance of accurate, widespread and repeated observations of earthquakes, their effects, and the faults on which they occur.” After examining the displaced ground, the Johns Hopkins geophysicist Henry Fielding Reid suggested that the earthquake must have corresponded to something like the energy released from snipping a taut rubber band. Today, the “elastic rebound” theory is fundamental to an understanding of seismology, according to the USGS. It underpins the idea that faults cause earthquakes, not the other way around.

This information didn’t vanquish the threat of enormous, teeth-baring earthquakes on America’s West Coast—but the photos are a reminder that, as brigades doused fires and troops built shelters, scientists stepped in to help in their own way, too.

These 72 images are a rare glimpse of an ancient city lost to time and conflict.
amusement parks

“I see the collection as a tool for uncovering what is already there."
Video • PinDrop