Meet the Woman Who Climbed Every One of Pittsburgh's 739 Public Staircases - Atlas Obscura
Want to see fewer ads? Become a Member. 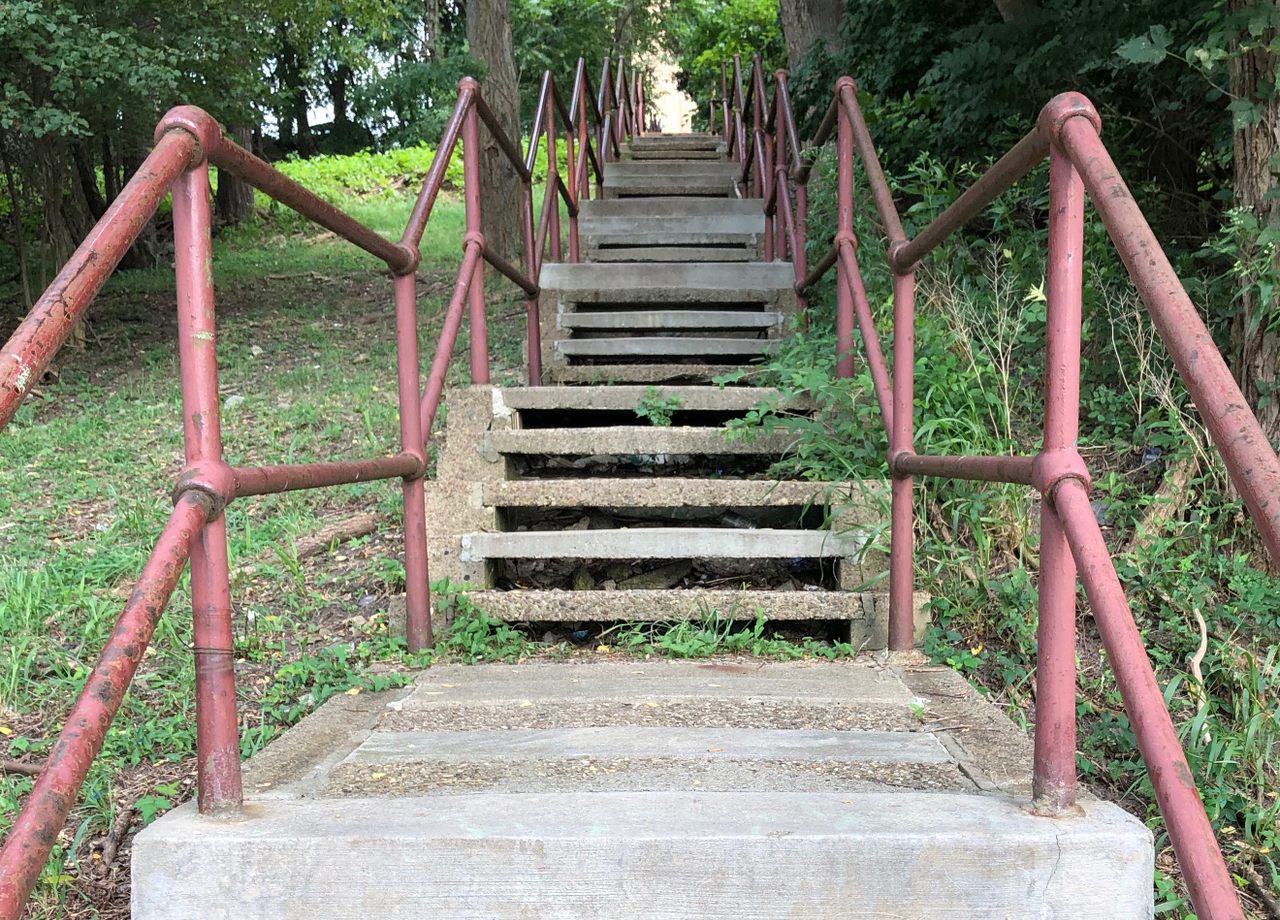 Pittsburgh has more public staircases than any other American city, a throwback to the Rust Belt town's industrial heyday. All images by Laura Zurowski
In This Story
Destination Guide

Staircases zigzag across Pittsburgh’s hilly terrain, some relics of another era, others recently refurbished in concrete. The Rust Belt city is home to more public staircases—739 to be exact— than anywhere else in the United States, and Laura Zurowski has walked every single one of them. It’s part of a project she playfully calls Mis.Steps.

When Zurowski moved to Pittsburgh from Providence, Rhode Island, her local staircase captivated her. She used it regularly to travel from her home in Upper Hill to meet friends for coffee or drinks in nearby Polish Hill—just two of the many Pittsburgh neighborhoods named for their steep setting. The staircase became not just a means of transportation but a place she cared about. She even started bringing clippers on her walk to trim the weeds encroaching on the steps. One day, Zurowski spotted Bob Regan’s Pittsburgh Steps: The Story of the City’s Public Stairways in a local bookstore and had an epiphany. The staircase wasn’t just a quirk of her neighborhood, she realized. There were hundreds more, and she wanted to climb every single one.

Atlas Obscura spoke with Zurowski about what drew her to the stairs, their unexpected delights, and the next step in her journey.

Why does Pittsburgh have so many stairs?

The elevation change here is significant. We’re one of the hilliest cities in the United States in terms of elevation changes. Beginning in the 1800s, many of these stairs were not created by the city government, like they are today, but more often by industries. Those stairs were made of wood—which means we don’t have any survivors today—and they were generally connecting people from residential areas to factories along the river. If you were a business owner, you needed to have a more guaranteed way to get people to come to work. You couldn’t always rely on dirt footpaths.

Through the early 1900s, there were more and more stairs being built. In the 1920s and 1930s, we started to see more stairways being built out of stone. Most of the stairs that we see in Pittsburgh today, with the exception of the handful that have been rehabilitated or rebuilt in the last five or six years, were constructed in the post-World War II era.

What drew you to exploring all the stairs?

That was five years ago. I took the book and the Polaroid Spectra and my film and journals and drove all over the city. Once I got there, I’d walk up and down the stairs and walk around the neighborhoods, seeing what’s there. It was through that ‘boots on the ground’ exploration that I’ve come to see just about everything in Pittsburgh. I’ve never been in a neighborhood I didn’t like. I feel very connected to the city now. Interacting with neighborhoods as they were originally designed 100-plus years ago has been deeply satisfying.

What’s the most extraordinary thing you’ve experienced on your journey?

There is a staircase I love called Rising Main, one of the longest flights, located in Fineview. It’s a flight that has been structurally compromised in many places due to the erosion of the hillside. It’s like scoliosis if you’re at the top looking down. It seems very unlikely that it will ever be repaired to the way it was before.

It was created because it brought people from Fineview into the Ohio Street Valley neighborhood and now it goes down to a highway. There’s something very special about visiting it because it is something that you know is going to go away. When I look at Rising Main, I say, ‘enjoy it now for what it is.’ If there was a landslide, it would be gone. It wouldn’t take much. But when you climb it, you can just imagine, ‘if I were a person living here 100 years ago, what would this have looked like?’

How have locals reacted to your project, especially given that some steps are very close to homes?

Sometimes people are nebby [Pittsburghese for “nosy”] because people are looking out for their neighborhoods. Once I tell people what I’m doing, they share stories and are super friendly. In five years, I’ve never had a bad experience with anyone that I’ve ever met.

I do see people on the steps, especially when gyms were closed early in the pandemic. I saw more and more people using them for exercise: running up and down them, walking their dogs, walking with their kids.

You recently walked your 739th set of stairs—in all, that’s more than 25,000 individual steps. Now that you’ve climbed every staircase, what’s next?

I’ve officially completed visiting all of the 739 stairs in Bob’s book, but the city counts more than 900 public stairs because it incorporated parks and playgrounds into its tally. I’ve got plenty more stairs to visit and document.

From Maine to Alaska, narrow gauge is all the rage, including one of the most historic, Pennsylvania’s East Broad Top.
subterranean

The fourth episode of TED’s Far Flung podcast looks at the power of collective creativity.
railroads