A Border Town Is Now Isolated From Both the U.S. and Canada - Atlas Obscura
Want to see fewer ads? Become a Member. 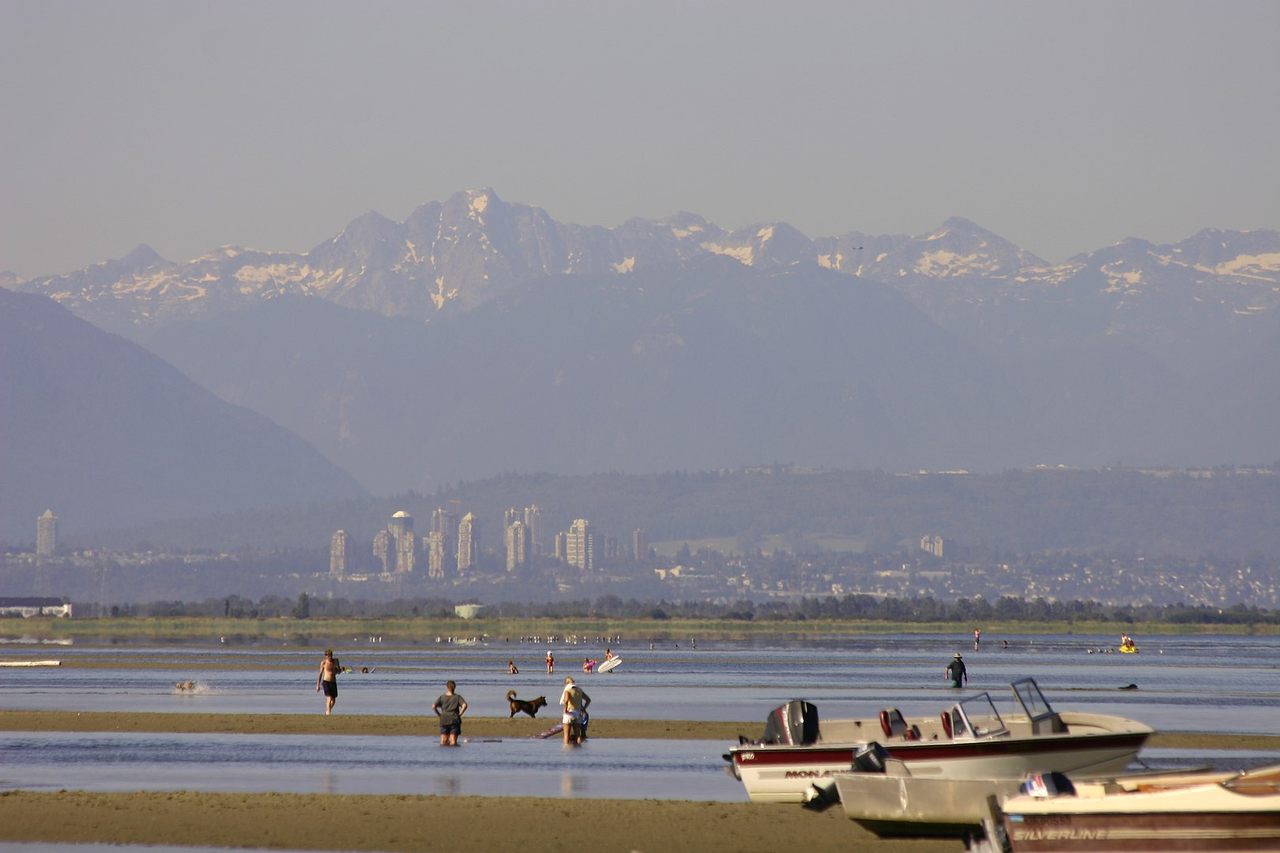 From Maple Beach in Point Roberts, Washington, locals have a clear view of Canada to the north. Gnatdroid / CC BY-SA 4.0
In This Story
Place

An American city stranded at the tip of a Canadian peninsula where strict adherence to the "49th parallel rule" became problematic.

This piece was originally published by High Country News and appears here as part of our Climate Desk collaboration.

On a clear Saturday morning in July, I called the Saltwater Café in Point Roberts, Washington. The café is usually crowded with dozens of customers seated inside and out on the patio, taking in the view of the Gulf Islands across the Salish Sea and enjoying the salty breeze from the beach across the street. “On a normal weekend, you can’t get a seat,” said owner Tamra Hansen. But on the morning she talked to me, just one table was occupied; business has been down 75 percent since the COVID-19 pandemic hit.

Across the U.S., businesses and communities are struggling. But Point Roberts is in a unique position—not just figuratively, but geographically. Located on the tip of the Tsawwassen Peninsula, the town falls entirely below the 49th parallel, the line that separates Canada and the U.S. To reach the closest town in the mainland U.S., Point Roberts residents must cross into Canada through a border checkpoint at the northern end of town, drive about 25 miles, then cross back into the U.S. through yet another checkpoint near Blaine, Washington.

Usually, those crossings are a mere formality; before the pandemic, it wasn’t uncommon for U.S. and Canadian citizens to cross the border several times a day for sports practices, shopping trips, and visits. But since officials restricted cross-border travel in March, Point Roberts’ roughly 1,000 full-time residents find themselves unexpectedly isolated, estranged from their usual lifestyle. Now, the invisible line dividing the two countries stands in the way of what was once an easy drive, and after four months of the pandemic, people on the Point miss the things they used to take for granted. “It’s very odd to be seven minutes away,” said Jessie Hettinga, a Point Roberts resident. “That was your life, but now, that’s not a possibility.”

It’s a common misconception that Point Roberts was a mistake; people often assume that when the U.S. and Great Britain signed the 1846 Oregon Treaty, which established the 49th parallel as the border between the two nations’ territories, land surveyors didn’t realize they were carving off Point Roberts from Canada. But the choice was intentional, meant to serve as a strategic advantage for the U.S., said Mark Swenson, treasurer of the Point Roberts Historical Society and author of Point Roberts Backstory, a history of the town.

As a result, Point Roberts has always had a fluid relationship with its Canadian neighbors. “We’re a community with one foot in both countries,” Swenson said. “We rely on each other.” During Prohibition, for instance, Point Roberts was a key rum-running port. “There was a speakeasy and brothel right on the border, on the Canadian side of the line, and the window opened into Point Roberts,” Swenson said. The tables turned in the ’60s, when Canadians began visiting Point Roberts to purchase alcohol because of a British Columbia law prohibiting its sale on Sundays, until the law was changed in 1986 for the World Expo in Vancouver. “You could have 10,000 Canadians in Point Roberts on any given Sunday through the ’60s, ’70s and early ’80s,” said Swenson.

Now, however, most visits are prohibited. Residents of Point Roberts can cross the border only to work, pick up prescriptions, or go to a doctor’s appointment in the mainland U.S., and they’re not allowed to stop in Canada at all during the trip. The only other way to reach the mainland is by private boat, or the twice-weekly $135 flight to Bellingham, Washington.

Border restrictions have never been as prolonged as the current ones—which will continue through August, if not longer—since the boundary was established, Swenson said. Even the closure following the 9/11 terrorist attacks lasted less than a day. The isolation “starts to wear on people,” said Christopher Carleton, the town’s fire chief. “That’s the point we’re at now: It’s leading to higher depression, and a lack of physical contact is causing a small crisis within my community.”

In July, Carleton wrote to President Donald Trump, Canadian Prime Minister Justin Trudeau, and other government officials, urging them to “recognize the unique circumstances” of Point Roberts and find a way to allow more open transit. Previously, two petitions on Change.org seeking to expand the list of activities that justify border crossings garnered thousands of signatures. One of the petitions, created by Canadian resident Kevin McIntosh, requested that Canadians with homes, boats or livestock in Point Roberts be allowed to cross into the U.S. to take care of their property; he wrote that he was concerned that his “Canadian-licensed pleasurecraft” moored in Point Roberts might sink without proper maintenance. After five weeks, McIntosh gave up waiting for an answer. On an update to his petition page, he described how what used to be a few minutes’ drive had turned into a full day’s journey: He flew from Vancouver to Seattle, rented a car to drive about 100 miles north to Bellingham, took the afternoon flight to Point Roberts and then spent a few days repairing his boat before sailing home.

The lack of tourists this season has affected the many local businesses that depend on Canadians’ money. Dean Priestman, manager of Point Roberts International Marketplace, the only full-service grocery store in town, said that he normally has so many customers in the summer that it’s hard to keep the alcohol selection stocked. This year, however, overall sales are down. While demand for some products remains—Priestman said he’s gotten some niche requests from Canadians for items they can only get in the U.S., like Grape Nuts, specific flavors of Tim’s Cascade Potato Chips, or Tillamook butter and cheese—the cost of international shipping has deterred such orders. “It’s usually a hustle-and-bustle place, but it’s not right now,” Priestman said. “It’s quiet.”

That quiet has extended to residents’ daily routines. Hettinga, who has three teenagers, said that between the kids’ sports practices and errands, it wasn’t uncommon for her to cross the border as frequently as nine times a day. Now, her daughter, an accomplished gymnast, and her hockey-playing son are trying to train via Zoom, in their backyard. “My daughters’ teammates are all together in Canada—they’re in the gym, and their life hasn’t changed,” she said. The last time Hettinga drove through Canada for approved business on the mainland, a pang of sadness hit her when she passed her favorite Greek restaurant. She and her husband used to go there every Friday; they know the servers by name, and the servers know their usual orders. Now, however, it would be illegal for her to even pick up a take-out order. “For us in Point Roberts, with the lack of services and ability to cross, we’re very restricted,” she said. “I feel like we’re on house arrest.”

The pandemic and consequent border closure have also added tension to the usually friendly relations between Canadians and Americans. “We have a huge issue in our country with the virus spreading, and there’s a lot of fear associated with Americans because of that,” Hettinga said. There have been stories in the local paper, the All Point Bulletin, of Canadians harassing drivers with American plates, and now that Canada has created hotlines for reporting suspected rule-breaking Americans, U.S. drivers don’t feel welcome. Hettinga’s son will be attending school in Canada in the fall, and she’s worried that he’ll be bullied for being American.

In some ways, though, the town’s isolation has been a boon for its residents. With few people leaving the area or coming in, the town is insulated from the rising case counts in other parts of Washington. The fire department offers COVID-19 testing, and so far, with 500 tests completed, no one has tested positive. Many say they’re grateful for the natural beauty of their town; though the lack of tourism is bad for business, it means residents often have the whole beach to themselves. And Swenson, the Point Roberts historian, said he appreciates the ingenuity of his neighbors, who still find ways to see one another across the international divide. In Point Roberts, Roosevelt Way runs parallel to the border, and a few Canadian cul-de-sacs in neighboring Tsawwassen run up to it from the other side, with just a curb separating the two countries. “You’ll see someone bring a lawn chair and sit on the Canadian side with an American sitting on the other side—six feet apart—catching up,” Swenson said. “That’s an only-in-Point-Roberts kind of scene.”

Travel down the Road to Productivity, go on a bear hunt, and hope you get to see Super Island.
maps

Show us how you navigate your world today.
globes

“It’s kind of a joke, but in some sense, I almost feel like I could start a war.”
Video • Wonder From Home

3:25
Want to see fewer ads? Become a Member.
From Around the Web
THE GASTRO OBSCURA BOOK
Taste the World!
An eye-opening journey through the history, culture, and places of the culinary world. Order Now