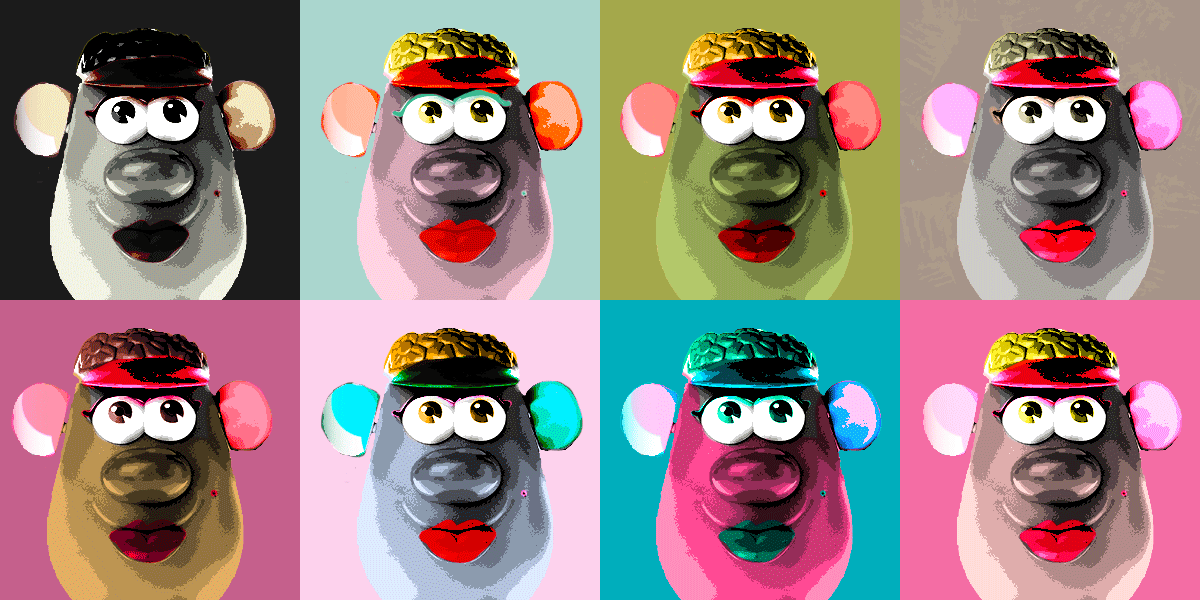 The tomb of history's greatest potato promoter is surrounded by tubers.
Food

A key step in the Andean technique of freeze-drying potatoes is stomping on them.

According to KnowYourMeme, the repository of information about internet trends and slang, the phrase “recorded with a potato,” in various forms, dates back to 2009. Or maybe 2010. Or earlier. It’s hard to tell. But the phrase had a moment among gamers, YouTube commenters, and forum users: If someone posted something lousy or of poor quality, like a dark and blurry photo, users might reply, “did you take this with a potato?” The response got so ubiquitous that someone even made a potato into a camera. (The photos it took are pretty great.)

That use spun outward. People, especially very online people who do not speak English as a first language, sometimes apologize for their “potato English.”

This is just the latest in a very long line of potato-isms. Across the world and throughout history, the potato has been used linguistically nearly as much as it has been used culinarily, with similarly varied results. Hot potato, small potatoes, couch potato, meat and potatoes. And that’s just in modern American English! Why is the potato seemingly the most idiom-friendly foodstuff?

The potato is native to the Andes Mountains, where by the time Europeans arrived, it had become the staple crop for an empire as large and probably grander than any in Europe. “It was like bread in France, or rice in southern China,” says Charles C. Mann, the author of 1491: New Revelations of the Americas Before Columbus. In the Andes there are thousands of varieties of potatoes, and many preparation methods that are still essentially unknown elsewhere, even though the potato is now a global crop. (One of those is chuños, which are frozen potatoes that have the moisture driven out of them. They end up freeze-dried, which gives them a shelf-life of decades.)

Such staple foods become so ubiquitous that they have a high likelihood of finding their way into the lexicon in the form of phrases and sayings. The reason is pretty obvious; these foods are the sustaining lifeforce for much of a population, and anything that important is bound to have a linguistic impact. A standard greeting in Thailand, for example, is “Gin khao reuyang?” which literally translates as “Have you eaten rice yet?” In Western Europe and North America, “bread” is synonymous with “money,” a sort of grim capitalistic equating of life and cash.

The records of the pre-Columbian and immediately post-contact Andes are not particularly good, but we do have some records that suggest that the potato had such a place in the Quechuan languages of the mountain population. According to a 17th-century Jesuit priest who spent time in these communities, the time a potato takes to cook was used as a shorthand division of time, so one might say that it took someone three pots of potatoes to build a roof. That continues to this day. According to the book Food, Power, and Resistance in the Andes: Exploring Quechua Verbal and Visual Narratives, by Alison Krögel, referring to potatoes can be used to cut a local down to size. If someone from the mountain region begins to put on the airs of a coastal resident of big-city Lima, a friend might say that they are “tan Cusqueño como la papa wayru,” meaning that they’re actually no more cosmopolitan than a local mountain potato.

European explorers/conquerors were completely baffled by the potato when they encountered it. Most of their world’s staple crops were cereal grains—wheat and barley, for example, and rice had been around Europe for a few hundred years. But an underground staple? Europe had carrots, beets, and turnips, sure, but nothing like the potato. Of the world’s major root staple crops, most—including the potato, sweet potato, and cassava—are native to the Americas. (The others are taro from South and Southeast Asia and the yam from, probably, Africa.)

We might as well address the actual word “potato.” It is … wrong, an anglicization of the Spanish patata, itself is a corruption of batata, which means “sweet potato” in the Taíno dialect the Spanish explorers encountered in the Caribbean. The Spanish, having never seen anything quite like either the sweet potato or the potato, simply used the same word for both, even though the plants are barely related. The Quechua word for potato is papa, which has mostly remained the go-to word for “potato” in Latin America.

Anyway! The thing about the potato is that it’s a really, truly amazing crop, and that’s part of the reason it has a toehold in idiomatic language around the world. It’s capable of growing almost anywhere, and it thrives in lousy, sandy, and/or acidic soil. It grows particularly well on rocky hillsides and mountainsides, where cereal crops don’t do so well. It requires basically no equipment to store or prepare, unlike the vast grain silos, mills, and community ovens used until recently to make bread from wheat in Europe. It keeps for weeks on end, longer if kept in a cool, dry place like a cellar. It’s easy to grow, and extremely efficient: Mann says that small farmers in Northern Europe got four times as many calories per acre of potatoes compared with cereal grains.

The timing could not have been better for the introduction of the potato to Northern Europe. The planet underwent what’s usually called the Little Ice Age from about the 16th to the 19th centuries. The climate was cooler than it was before, during the medieval period, or after, in the modern era. Europe was also heavily rural and very poor, and the rural poor, especially in places such as Ireland, did not have access to the best land. What they were left with was cold weather, hilly and unforgiving farmland, and hunger. The potato was the solution.

Still, it took some time—a hundred years or so in Central Europe, a little longer to the West—for the potato to catch on, partly because it was so unfamiliar, and partly because there was a myth that it was toxic. (To be fair, the leaves actually are.) But hunger and war are powerful forces, and by the 1700s many European governments were actively promoting the potato to their peasantry, as fuel for potential low-cost armies.

In the Andes, potatoes were a significant part of the diet of the poor as well—the elite got to eat maize, which is harder to grow in the region—but potatoes were not a stigmatized food. In Great Britain, though, the potato was closely associated with the northern poor. “It’s associated with cheap, with poor. We’re not talking caviar, here,” says Andrew Smith, author of Potato: A Global History. And that stigma showed up in the language.

“Small potatoes” are something worthless. A “couch potato”—a phrase apparently coined by a guy in Pasadena in the 1970s—is lazy, stationary, lumpy. Same with the newer version, “mouse potato,” referring to a person seemingly permanently attached to a computer mouse. (That one could probably use another update.) “Meat and potatoes” can be positive or negative depending on the situation; it might mean stolid and efficient, or it could mean boring, uninspiring, pedestrian—the latter qualities historically associated with the poor. In Spain, “potato” can be used to describe something low-quality; check out the comment on this post describing a car as “una patata de coche,” a “potato of a car.”

But there are also plenty of terms, in English and other languages, that are either neutral or positive toward the tuber. A mostly extinct phrase, once popular in Australia and New Zealand, is “not quite the clean potato,” meaning something or someone not without fault. “Hot potato” is pretty literal and neutral. In Cajun and Quebec French, you might hear “Lâche pas la patate”—literally, “Don’t let go of the potato,” but really meaning, “Don’t give up.” In France, there’s “avoir la patate,” which you might say if you’re having a good day. The literal translation: you “have the potato.”

When Russians talk about going to a dacha, a summer getaway home, they’ll say they’re going “na kartoshku,” or “to the potatoes,” since many summer experiences heavily involve gardening. Concepts are sometimes compared to potatoes, too. In 2005, then–Defense Minister Sergei Ivanov said, “Democracy is not a potato that you can transplant from one garden to another.” A Russian adage holds that “Love is not a potato; you cannot just throw it out the window.”

There’s just something evocative about the potato. It grows underground, and is covered in dirt. It can be lumpy and ugly, at least when compared with something like a shiny perfect apple, a tasseled and golden ear of corn, or a vibrant, full-to-bursting tomato. It asks little of its tender. But it can sustain many, easily and efficiently. It’s the food of the people. And it’s in the language we potato-eaters speak, too.

How do you feed eight billion people during a nuclear winter?
potatoeslanguagefood

Locally Famous Foods Are Now Getting Plaques Like Historical Sites

Syracuse got one for salt potatoes—could your hometown be next?
food

Just 10 men are permitted to hunt and pickle 2,000 young seabirds on a desolate island each year.
food

Ketchup and mayo are just the beginning.
Video • AO Docs

For a buck, students can snag freshly picked apples grown in the university orchards.
Want to see fewer ads? Become a Member.
From Around the Web
THE GASTRO OBSCURA BOOK
Taste the World!
An eye-opening journey through the history, culture, and places of the culinary world. Order Now