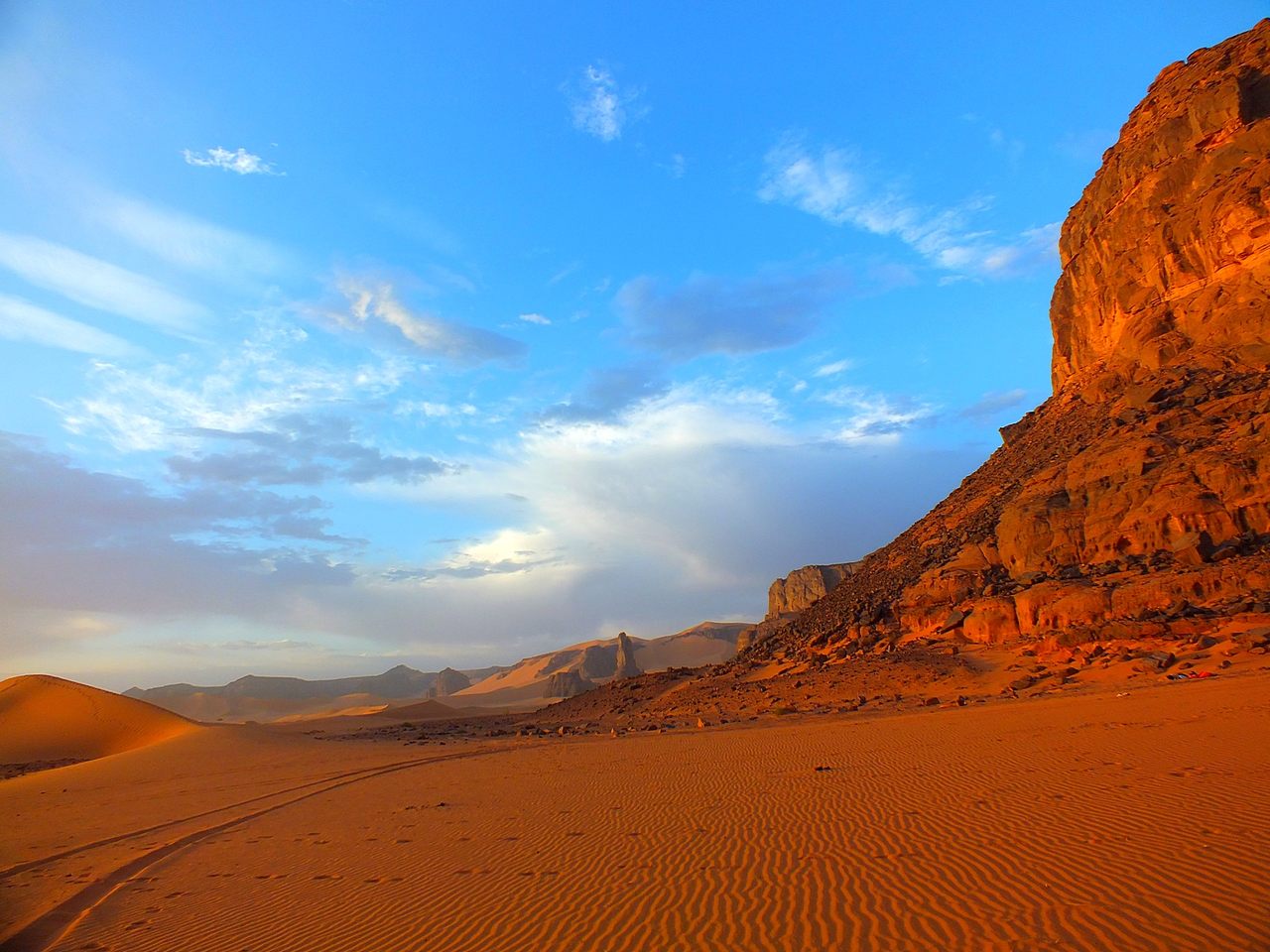 Humans have made art for millennia in and around the unusual rock formations of Algeria's Tassili n'Ajjer—including, possibly, depictions of hallucinogenic mushrooms. Akli salah, CC BY-SA 3.0/Wikimedia
In This Story
Place

A Land Rover speeds across an almost lunar landscape, sending plumes of dust skyward in its wake. Knocking around in the back seat, Giorgio Samorini snaps photos of eerily eroded sandstone formations. The year is 1988 and the place is Tassili n’Ajjer, in the Algerian Sahara. It is a remote region with a well-deserved reputation for mystery, particularly regarding some of the extensive prehistoric art found in natural rock shelters scattered around its cliffs of orange-red rock. “When I first saw the paintings, I felt like my life had entered a new phase. I’ve never been the same,” recalls Samorini, an Italian ethnobotanist and independent researcher who studies psychoactive plants and fungi.

Archaeologists have documented about 15,000 drawings and engravings in the Tassili n’Ajjer region, which is designated by UNESCO as a World Heritage Site and is one of the most important collections of cave art in the world. Over millennia, prehistoric artists painted or carved a menagerie of animals, wild and domesticated, as well as plants and people involved in hunting and other daily activities. But there are also depictions of something much stranger: the “Round Heads,” humanoid figures with oversized heads who appear to be flying. Dated from 9,500 to 7,000 BC, the images of levitating people, as well as masked “shaman” figures with large mushrooms sprouting from their bodies, may be the earliest depictions of the ritual use of psilocybin-producing, psychotropic mushrooms, according to Samorini.

The art on the cave walls of Tassili n’Ajjer, he notes, was created during a period when the Sahara was a temperate savannah. “We know that various species of Psilocybe grew in this area at this time,” says Samorini. “To imagine that the people who created these artworks were not aware of them isn’t realistic. They lived nomadically, with probable encyclopedic knowledge of the flora and fauna of the area in order to survive.”

In 1956, intrigued by earlier, anecdotal stories about the paintings, French ethnographer Henri Lhote launched an expedition to Tassili. When he saw the paintings—one image about 20 feet (6 meters) in height—he named them jabbaren, Tuareg for “the giants.” Lhote thought that the paintings might have been depictions of extraterrestrials, but he never connected the art to psychedelic mushrooms.

Other Tassili prehistoric art scholars have a more grounded view. University of Bristol archaeologist Jitka Soukopova specializes in the Round Heads cave painting era but is not involved in Samorini’s research, or with the study of psychedelics in general. She declined to discuss Lhote’s alien theory, and notes that images of what Samorini has interpreted as psychotropic mushrooms could be almost anything. “There’s no way to prove him wrong or right,” Soukopova says.

“These people were more like us than they were different. Their paintings are artistic interpretations of their natural environment,” she says of the Tassili artists. “We know these humans had access to psychotropic drugs, so they likely experimented with them just like we do. I am convinced that prehistoric people used natural hallucinogens, but there is very little evidence to prove it.”

The mushrooms depicted in the Tassili caves may be Psilocybe mairei Singer, a species common to the region, according to a 2012 paper in Acta Botánica Mexicana by the late psychotropic mushroom expert Gastón Guzmán, which compared prehistoric mushroom depictions in Mexico, Spain, and Algeria. Because the images at Tassili are weathered—and there are an enormous number of mushrooms that look alike—even Samorini says identifying the exact species is not possible, particularly because physical evidence of psychotropic mushrooms, such as residues or even trace DNA, has never been found in the caves.

Depictions of mushrooms in rock art is not unique to Tassili n’Ajjer. Imagery has been found in caves from Tanzania to Siberia, where figures sport large mushrooms as caps, says ethnomycologist Brian Akers. Akers has written extensively about psychotropic mushrooms throughout human history, including as coauthor of a 2011 paper, published in Economic Botany, on Spain’s Selva Pascuala cave, where artists painted mushrooms as well as bulls and other animals. He sees his field’s ongoing debate about what prehistoric mushroom art represents in a philosophical light.

“A determined armchair theorist can simply refute any connection between rock art and psychedelic mushrooms,” Akers says. “You can lead a horse to fungal pictographs, but you can’t make it see them. In that same way, how can we be sure the bull is really a bull? Maybe in some essential sense, it’s really an enigmatic figure onto which we unwittingly project a culturally arbitrary notion of ‘bull,’ like seeing shapes in clouds. Maybe everything is just a social construct.”

Akers adds: “The Samorini mushrooms look like fungi to me. We know that the majority of other plants and animals in hunter-gatherer cave art were hunted and/or consumed by the culture in question, so we can assume the mushrooms were, too. Sure, these depictions in Algeria are more abstract, less realistically depicted than the ones in Spain, in my opinion, but why not allow the possibility they’re fungi?”

Akers notes that, since many other aspects of cave art are interpreted as historical records—from types of flora and fauna to hunting techniques—fungi also likely had some meaning to prehistoric people around the world who included them in their art. “These are likely cultures in which the role of the psychedelic effects of mushrooms are deeply integrated, right at the center of the culture.”

Samorini agrees, adding, “Mushrooms are a low calorie food and many species are highly poisonous—even deadly—so it’s unlikely that painters would have glorified them on cave walls unless they had another, more ritualistic purpose.”

Samorini’s psychedelic mushroom theory hasn’t gained much traction among researchers, but he is undeterred. In the decades since his Land Rover first sped across the Algerian desert, he has expanded his mission, compiling evidence of a range of mind-altering drugs ancient humans may have used.

“We have evidence of humans experimenting with all sorts of intoxicants for thousands of years,” Samorini says. “Our prehistory was probably a much more experimental time.”

Scores of ancient paintings and other works will soon succumb to the sea—but a passionate team is determined to preserve this 'bubble of memory.'
caves

Prehistoric people may have created 'proto-cinema,' with galloping bison and tail-swishing horses.
science

Children and even infants joined adults in making their marks, say archaeologists.
Video • Object of Intrigue