Photos of the Peruvian Festival That Creates a New 118-Foot Bridge Every Year - Atlas Obscura
Want to see fewer ads? Become a Member. 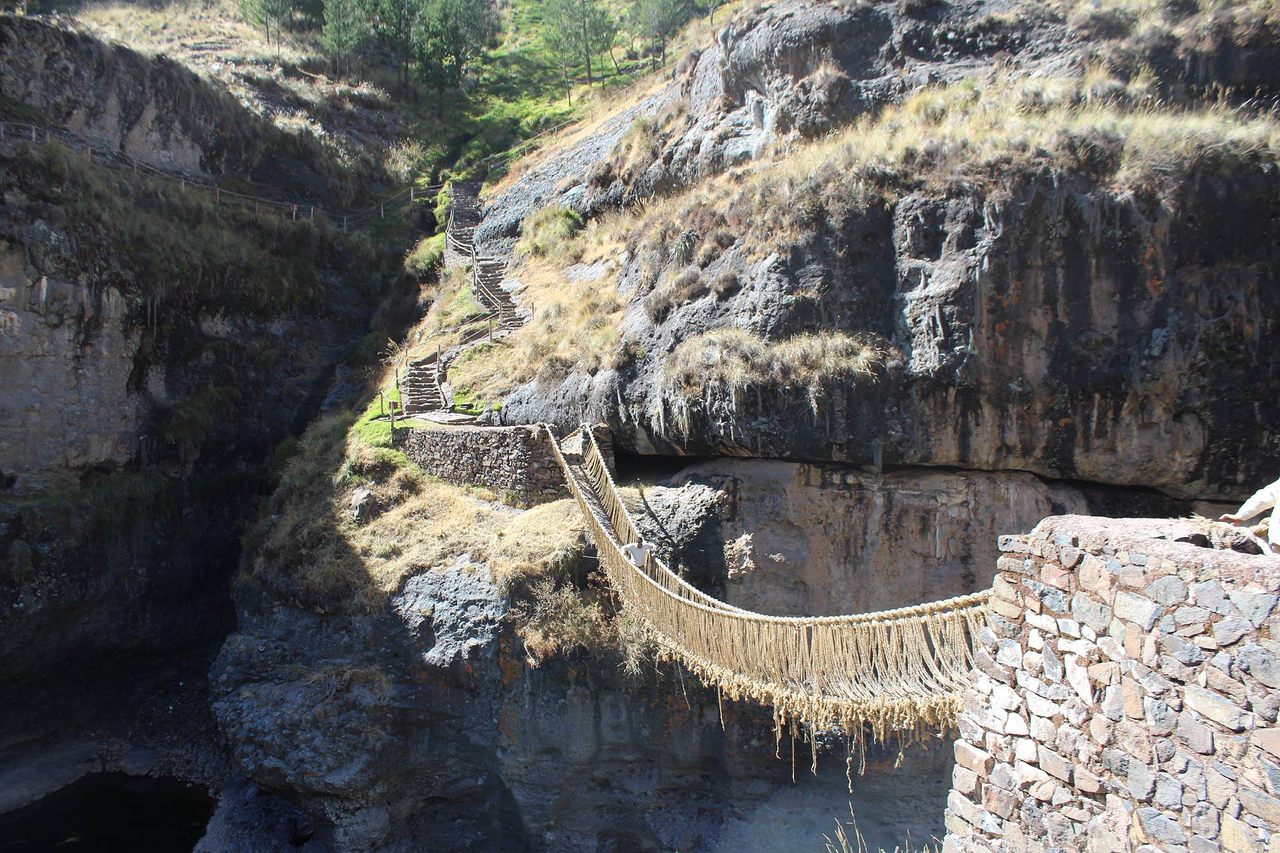 The last crossing of the 2016 Q'eswachaka before the new bridge was constructed. All Photos: Scott Ferrara
In This Story
Destination Guide

Although the Inca Empire has long since vanished, Peru’s Cusco Region is saturated with archaeological and historical sites that offer a glimpse into pre-Columbian civilizations. In one particular remote mountain village, Inca tradition is alive at a three-day event that has been performed annually for 600 years: the rope-braiding festival of the Q’eswachaka, the last handwoven Incan rope bridge.

During the festival, members of four local Quechua communities contribute strands of rope woven from grass. These strands are then woven together to create a 118-foot bridge that is slung across the Apurimac River. It replaces the bridge woven the previous year, which sags more and more over its 12-month reign.

The 2017 festivities took place in June beside the river, nearly a four-hour drive south of the city of Cusco. The trip is over rough and mountainous terrain and past cookie-cutter villages influenced by early Spanish conquest.

Approaching the bridge, there are a few thatched roof homes along the road. Older men and women sit on the ground in their yards, braiding together bundles of tall grass. The grass used for rope production is called ichu. The Quechua people collect ichu and bend it to make it more pliable. They then hammer the grass with a stone while occasionally pouring water over it. This method creates a flexible product that can be easily braided into a sturdy rope.

The area of the Q’eswachaka was very quiet on the first day of the festival. There were only a handful of local villagers relaxing by the bridge. However, around noon, hundreds of villagers descended from their mountain homes carrying large bundles of prepared rope. All the men were dressed in white jackets and pants with white hats. The women were all dressed in a traditional, vibrantly colored melkkhay skirt. Many of the women carried their babies in a backpack-style blanket carrier called an awayu.

Within the first few hours, farm trucks drove down to the bridge with many large red garbage pails filled with homemade corn beer called Cheecha. The villagers also brought a large oven to bake cuy for the participants of the festival (cuy being the Quechua name for roasted guinea pig). This is a traditional meal of Peru which predates the Inca. Cuy is prepared for this festival in abundance using a local herb for seasoning called huacatay. Huacatay (Tagetes minuta) is a marigold that grows wild around the bridge and has a pungent lime smell.

Soon the roads around the bridge were densely crowded with hundreds of villagers laughing and huddled in groups around the area while preparing more braided rope. A section of the road had been cleared and some men had laid out long strands of rope. They had taken positions along the length of the rope and began braiding together the many strands of prepared rope to make a thicker product. This process continued throughout the first day and yielded enough rope to reconstruct the bridge.

The following days included, carrying the rope across the old bridge, tying the new product securely to the anchor points, and, finally, cutting down the old bridge.

Ancient Romans Were Using Lead Pipes Earlier Than We Thought

In Peru, it has gone from a humble and ceremonial food to a delicacy among urbanites.
science

A remarkable ancient technology and tradition that united communities in the Andes is fading into history.
Want to see fewer ads? Become a Member.
From Around the Web
THE GASTRO OBSCURA BOOK
Taste the World!
An eye-opening journey through the history, culture, and places of the culinary world. Order Now