How the Tower of London's Ravenmaster Sets the Scene for Avian Romance - Atlas Obscura
Want to see fewer ads? Become a Member. 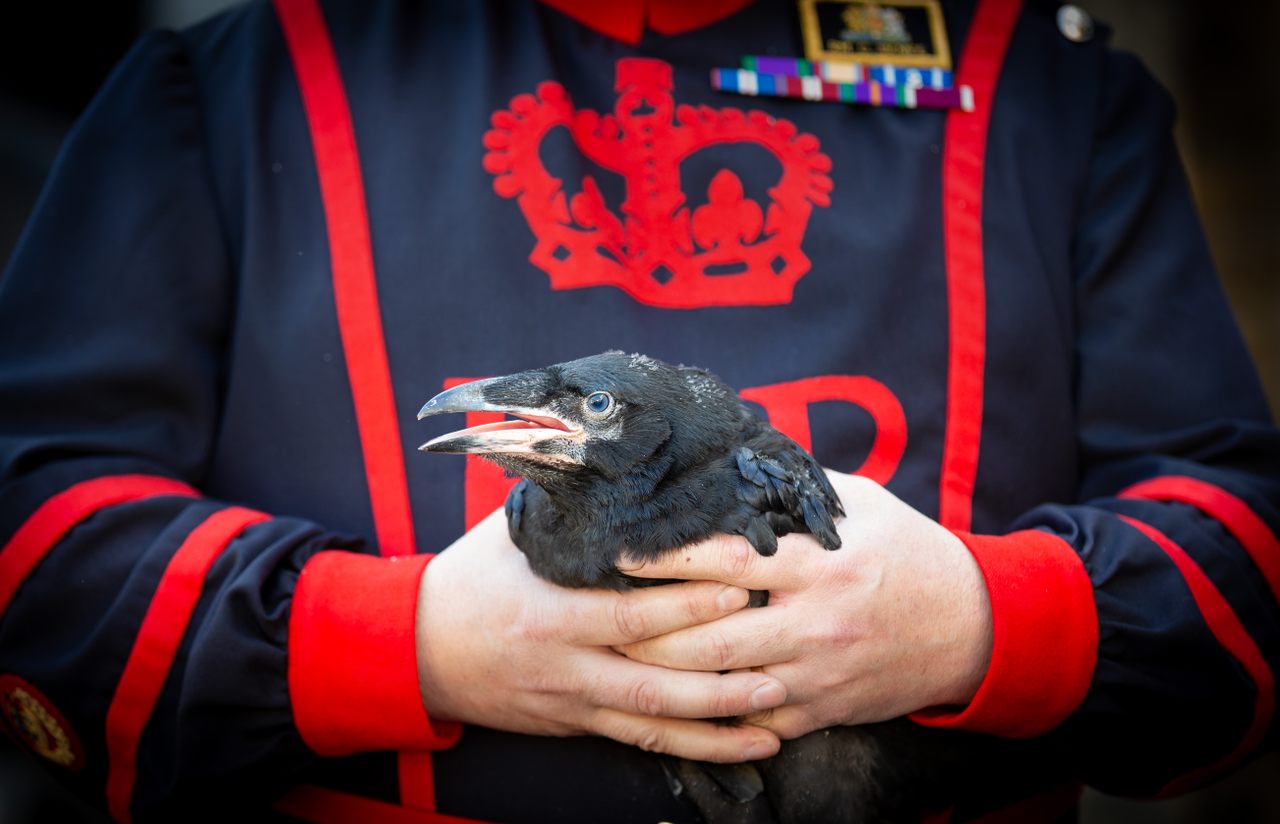 For ravens, isolation is an aphrodisiac. Out in the wild, the birds get busy in the highest, loneliest places they can find, mating and nesting in secluded trees, atop telephone poles, or beneath the rocky overhang of a cliff. “They like to do their business in private,” says Chris Skaife, the ravenmaster at the Tower of London, who tends to the fortress’s resident flock.

When solitary digs are sexy, it’s easy to imagine how the clanging, crowded, pulsing heart of London would kill the mood. So when Skaife recently set out to breed birds at the Tower for the first time in several decades, he had his work cut out for him. Previous attempts under another ravenmaster hadn’t always gone to plan. “Because there was so much noise and so many people, the ravens were discarding the nest and destroying the eggs,” Skaife says. The last bird born at the tower hatched in 1989, and was named Ronald Raven. At the time, the Associated Press reported that Ronald was the first bird to squawk its way into the world inside the fortress since the mid-17th century reign of Charles II.

The ravens are iconic occupants of the Tower, and central figures in the myths that soar through its stone walls. As legend has it, if the birds fly the coop or their ranks dwindle down to nothing, “the Tower itself will crumble into dust and great harm will befall the kingdom,” Skaife explains in his book, The Ravenmaster: My Life With the Ravens at the Tower of London. Since U.K. laws now stipulate that educational displays can only feature captive-bred birds, Skaife explains, the Tower no longer takes in wild-born corvids. But “we were finding less and less people to supply us with legal, captive-bred birds,” Skaife says. It wasn’t an emergency—ravens can live for decades in captivity, and the Tower’s oldest raven is said to have died at the age of 44. But Skaife was thinking about the future: Three or four decades down the line, where would the Tower get its inky, feathered citizens?

Skaife knew that breeding ravens would react poorly to hustle and hubbub, so the challenge was to make the loud, busy Tower of London feel as remote and empty as possible. Then in late 2018, he had a stroke of luck: A friend offered to lend him a pair of prolific breeders, Huginn and Muninn, who mated each year in February, March, or April, like clockwork. These birds had spent their whole lives in Sussex, in Southern England, mating and nesting and enjoying the fresh country air. London doesn’t have much of that to offer, and at first, Skaife worried about how the birds would fare. “They’re neophobic—they don’t like change,” he says. “They like everything done in the same way. If you change something, it throws them off slightly, like, ‘What are you doing that for?’”

Breeding and rearing animals in captivity is often a delicate dance, with choreography that is intricate and sometimes goofy. Scientists trying to persuade confirmed bachelor Lonesome George—a Pinta Island tortoise, or Chelonoidis abingdonii—to mate resorted to gambits including smearing their own bodies with female-tortoise hormones, the Guardian reported. (It was all for naught, and when George died in 2012 at the age of 100 or so, his subspecies vanished with him.) Some researchers famously donned gangly costumes and puppets to prepare captive-bred whooping cranes to eventually leave their environs, and others went to great lengths to rekindle the spark between longtime loves and current enemies Bibi and Poldi, a pair of Galápagos tortoises that are mysteriously on the outs after nearly a century of peaceful cohabitation. Mating and living in captivity simply isn’t the same as doing so in the wild, and when humans try our hand at matchmaking, there are factors we can’t control. The best tactic is sometimes a combination of eagerness and aloofness, Skaife says. “I put the tools in place for them to be in a comfortable environment,” he adds, “and then I let nature take its course.”

Skaife set out to make Huginn and Muninn’s transition from Sussex to London as seamless as possible by essentially making the Tower feel a little more like the countryside. Before the birds left their familiar habitat, Skaife photographed every inch of their enclosure, inside and out, with the aim of faithfully recreating it in London and replacing everything exactly where the birds would expect it to be.

Then, back at the Tower, Skaife started scouting for a quiet cranny where the birds could hunker down. He settled on an area in the moat, beyond visitors’ view. That’s where he placed their enclosure—40 feet long, 15 feet high, and 20 feet wide, covered in wire and, in an effort to insulate the birds from visitors’ noise, topped with a little “roof” made from hard plastic. He reinstalled their breeding boxes exactly where they’d been before, introduced the birds to their new home, and then stepped back to allow them to acclimate to the unfamiliar sounds and smells.

That can take time, so Skaife figured it was safest to keep expectations low. “I said, ‘Look, the chances of them breeding in early 2019 are really slim this time around,’” he says. Even so, soon after Christmas, he started trying to entice them toward amorousness. He began feathering the enclosure with the things they’d need to build a nest—a few twigs here, a little alpaca fur there. For several months, the ravens couldn’t have been less interested; they left everything exactly where Skaife had put it. “So, I was going, ‘Ok, it’s probably not going to happen this year,’” he recalls.

And then, one day, the birds lashed out at him. “They started attacking me when I went into the enclosure,” Skaife says, to the point where he stopped trying to enter it, and just nudged food in from the outside. While the prospect of being pummeled by sharp-beaked birds is a little daunting, Skaife was glad to see that the birds were getting aggressive: He interpreted the behavior as a signal that the pair was getting ready to go into nesting mode, and acting like protective parents.

Which is exactly what they did. They began constructing a nest in the box that “they hadn’t gone anywhere near in about five months,” Skaife says. They kept at it for a few days, drawing on the things he had placed in the enclosure, as well as some grass tufting from the bottom. “They used all the alpaca wool, all the twigs I brought in,” Skaife says. “Every single thing, they used.”

The scene was set for romance, and, from a distance, Skaife watched them in the act. (“It’s a bit weird,” he says, “but I did it.”) Within a few days, a clutch of eggs appeared in the nest. The female raven incubated them for 21 days. Then, toward the end of April, four of the five eggs hatched, and the young chicks began flinging their scrawny necks back, stretching their beaks wide, and cawing like mad.

Skaife’s work wasn’t done. He knew he wanted to keep one of the baby ravens for the Tower’s flock, and because he no longer clips birds’ flight feathers to keep them grounded, it was key to make sure that he imprinted on the fledglings. To build that relationship, Skaife treated them like family: He brought them home with him.

He took a special shine to Georgie, the runt. (“I like the underdog,” Skaife explains.) Skaife determined that three of the four young ravens would live with a raven breeder in Suffolk, who could eventually supply the Tower with their captive-bred offspring, and Georgie would be installed as a permanent resident. (For now, Georgie’s sex is still indeterminate, because, even with a keen eye, even after spending “an unhealthy amount of time around ravens,” it’s hard to distinguish between the species’ male and female members, Skaife says. There are sometimes clues in a bird’s size, fluff of the chest feathers, bill, or middle toe, he adds, but the surest sign is a DNA test, and the Tower won’t know for sure until Georgie’s next visit to the vet.)

Since Georgie would go on to be one of the Tower’s tenants, Skaife decided that the little bird should stick around even longer to continue cementing their bond. That meant that, for several weeks, Skaife was on call for frequent caregiving duties.

Like young humans, young ravens have a busy schedule. “Baby ravens do one of three things—eat, sleep, and poo,” Skaife says. “They poo a lot.” Skaife fed Georgie every few hours, alternating between mice, rats, quail, and biscuits soaked in blood from a local meat market. When Georgie wasn’t snacking or pooping, the bird hopped around Skaife’s bed or played in the dishwasher, which proved to be an exciting avian jungle gym. Georgie scaled Skaife’s shoulders, too—and sometimes pooped there. Ravens “like to climb,” Skaife says. “They like to look out over the world.”

Though the love nest itself is still off-limits to visitors, Yeoman Warders will guide guests past the main raven enclosure on tours throughout July 2019. Meanwhile, Skaife continues to document Georgie’s life—including the bird’s first flight, which he chronicled on Twitter, with a striking black-and-white photo and a smiley-face emoji. For Skaife, it’s the interspecies equivalent of whipping out a cell phone in the office to show off photos of a baby’s first steps. “I’m absolutely as proud as punch,” Skaife said in video birth announcement produced by Historic Royal Palaces. “Happy dad.”

Found: An Ancient Roman Shipwreck Off the Coast of Cyprus

Dog sacrifice, lawless war-bands, and coming of age on the Russian steppes.
architecture

Researchers use art and ancient bones to make the case for modern lions once freely roaming Southeastern Europe.
Video • PinDrop