What It Actually Means to 'Read the Riot Act' to Someone - Atlas Obscura
Want to see fewer ads? Become a Member. 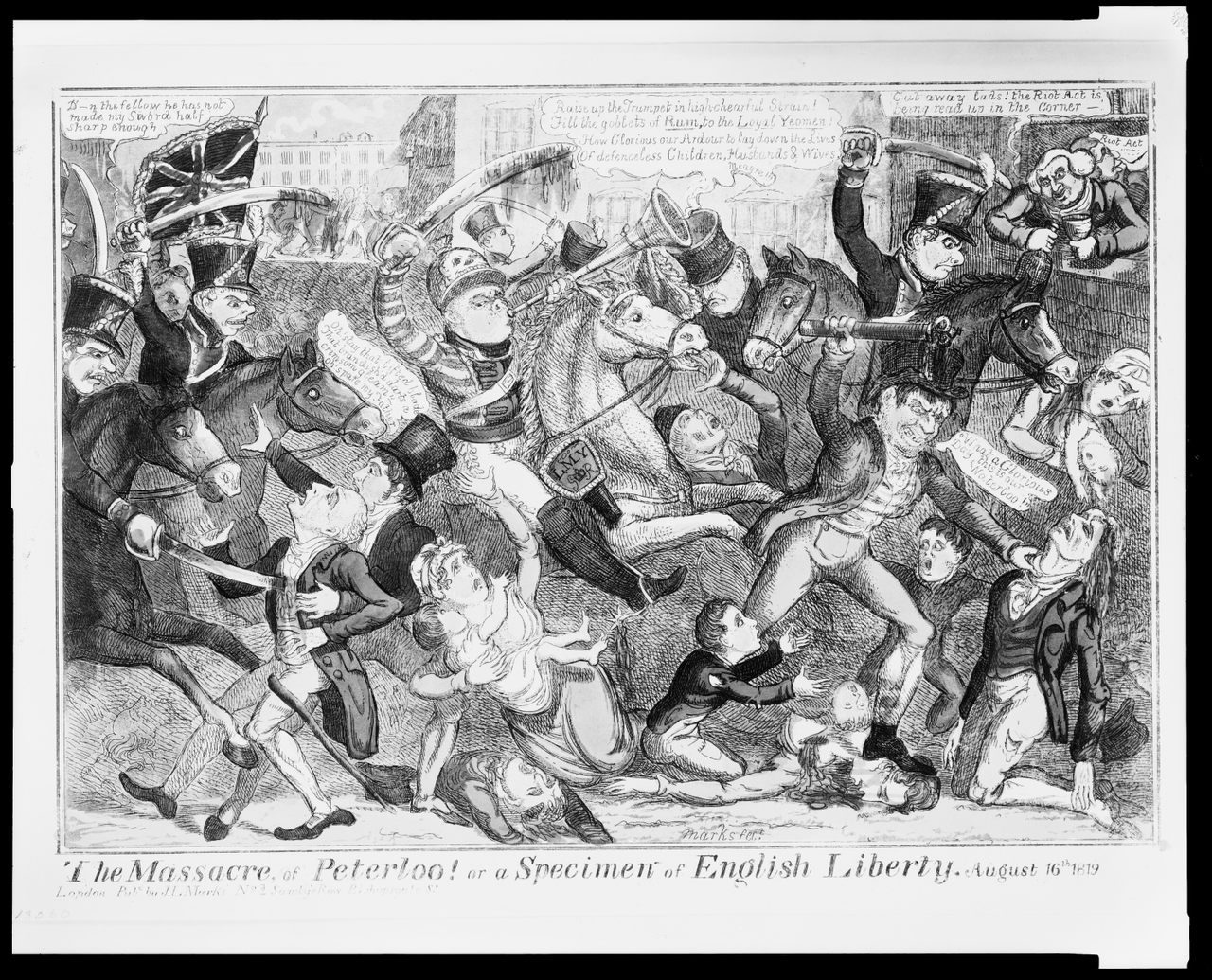 This print depicts the Peterloo Massacre, which took place in Manchester, England, in 1819. As the cavalry rides into the crowd, killing 15, someone reads the Riot Act (top right). British Cartoon Prints Collection, Public domain, via Wikimedia Commons

When someone talks about being “read the riot act,” it usually means they’ve been caught engaging in antisocial behavior and chastised accordingly. But it’s not just a quirky idiom—the origin of the phrase comes from a real Riot Act designed to quell discord. And it had to be read, out loud, in order to take effect.

Back in 1714, the original Riot Act was passed by the British parliament. It took effect on August 1, 1715. It was aimed at “preventing tumults and riotous assemblies,” and made provisions for “more speedy and effectual punishing” of those who engaged in civil unrest.

If a group of a dozen or more people gathered and showed signs of being unruly, the Riot Act enabled an officer of the law to approach the crowd and tell them to disperse. To do so, said officer had to literally read the Riot Act, in a manner similar to the United States’ practice of reading someone their Miranda rights before interrogating them.

The proclamation part of the Riot Act, which had to be recited aloud to the letter, went thusly: “Our Sovereign Lord the King chargeth and commandeth all persons, being assembled, immediately to disperse themselves, and peaceably to depart to their habitations, or to their lawful business, upon the pains contained in the act made in the first year of King George, for preventing tumults and riotous assemblies. God Save the King!”

Once the officer—who could be a mayor, bailiff, sheriff, or justice of the peace—read this wordy sentence, ideally in a booming and authoritative voice, the group received a grace period of one hour. After 60 minutes elapsed, any members of the crowd who remained had officially committed a felony. The punishment? Death.

Ideally, rabble rousers would listen to the reading of the Riot Act, reflect upon their wrongdoing, and each saunter away in silent contemplation, thus avoiding further confrontation and eventual death by execution. In practice, however, assembled crowds were less inclined toward such peaceable resolutions.

If the situation was spiraling out of control, the officer upholding the law was under no obligation to hang back for the full hour while things escalated further. In those cases, said officer could recruit any able-bodied bystanders to help subdue the rambunctious rabble.

During a Special Commission for the trial of rioters who participated in London’s massive anti-Catholic Gordon Riots of 1780, Lord Loughborough clarified the post-reading-of-the-Riot-Act procedures: “If the mob, collectively, or a part of it, or any individual, within or before the expiration of that hour, attempts or begins to perpetrate an outrage amounting to felony, to pull down houses, or by any other act to violate the law, it is the duty of all present, of whatever description they may be, to endeavor to stop the mischief, and to apprehend the offender.”

The Gordon Riots, which ran rampant over London for the better part of a week and resulted in hundreds of deaths, were among many skirmishes that occurred in that stormy era of class conflicts and religious clashes.

“[T]he Riot Act was in constant use throughout the turbulent eighteenth and early nineteenth centuries,” writes Frances Webber in “Six Centuries of Revolt and Repression,” published in the journal Race & Class. London in particular, “suffered mini-riots on almost every public occasion; elections, fairs, executions were accompanied by window-smashing and looting by the poor, who were able to disappear speedily into the maze-like back alleys which were ‘no-go’ areas for gentlemen and troops alike.”

During larger protests, the reading of the Riot Act could further antagonize an already violent crowd. In 1768, a protest in south London against the imprisonment of radical John Wilkes turned into a deadly melee, as Jerry White writes in A Great and Monstrous Thing: “The Surrey magistrates read the Riot Act but the violence intensified and the soldiers were ordered to fire. Two volleys of musketball were shot into and over the crowd. Seven died that day, including a woman orange seller and a man driving a hayrack, unluckily hit by a ball fired over the people’s heads.”

The incident became known as the Massacre of St. George’s Fields

According to the BBC, the last attempted reading of the Riot Act took place at the Battle of George Square in Glasgow, Scotland, on January 31, 1919. On that occasion, protestors fighting for shorter working hours clashed with police. During the conflict, a sheriff began to read the Act, but the sheet of paper was, in the words of the BBC, “snatched out of his hand” by protestors.

The Riot Act was finally repealed in England and Wales in the Criminal Law Act of 1967, which rendered a slew of old legislation obsolete. Though British police officers are no longer required to stand in the middle of an unruly crowd reading from a sheet of paper, the concept of reading someone the riot act survives.

More than 300 years after it first came into effect, to be threatened with “the riot act” is to be told to stop causing trouble, or there’ll be trouble.

Clues to who the 19th century Frenchman was can be read on his unusually preserved remains.
murder

In ancient Rome, murder was a private business, unless the emperor took an interest in the case.
crime

You might be able to tell where you are by what happens if you set one ablaze.
Video • AO Docs