On Restaurant Day in Helsinki, Anyone Can Open an Eatery, Anywhere - Gastro Obscura
Want to see fewer ads? Become a Member. 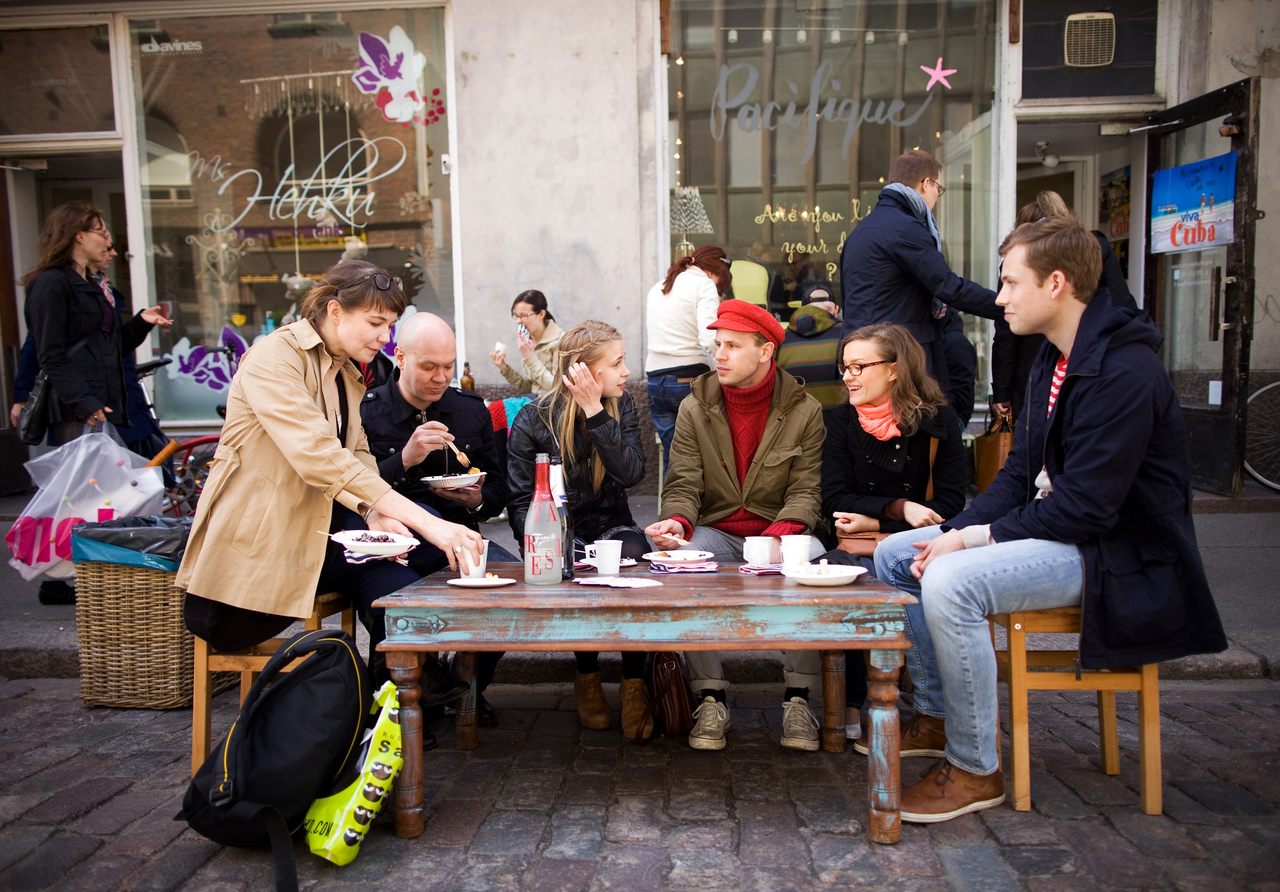 In 2012, this Cuban restaurant popped up in downtown Helsinki. Roy Bäckström/Restaurant Day
In This Story
Food

A young girl, blonde head bowed and carrying a small straw basket, was walking quietly up and down a street in central Helsinki on a recent Saturday morning. On a hunch, I pointed to her basket and asked if she was in business. She said yes, and showed me the oat cookies she had baked the night before.

It was Restaurant Day in Helsinki, where on the third Saturday of February, May, August, and November, anyone can open a restaurant, anywhere. In the case of 13-year-old Ruut Sundman’s basket, proceeds from her cookies would go to medicine for one of her rescue dogs. Last Restaurant Day, she ran a restaurant in her mother’s jewelry shop with her friends. “We baked muffins and cookies, and we gave the money to UNICEF,” she said.

Not far away, in a quaint city square, Omar and Tammy were setting up a ceviche stand. Both from Spain, he worked at a hotel, and she was in hairdressing school. Tammy and Omar are typical Restaurant Day participants: amateur cooks who want to share a favorite food and connect with others in their city. “You meet new people, it’s open minded,” Tammy said.

Yet Restaurant Day began as a civic protest. In 2011, Helsinki resident Timo Santala wanted to start a mobile bicycle bar, selling drinks and tapas. Frustrated by red tape in a city where everything is highly regulated, he imagined a day where a restaurant could open with no licenses and no limitations. He and his friends came up with Restaurant Day, a food carnival where anyone can open a restaurant, anywhere they want, for a single day.

In May 2011, they launched their first event. Participants opened restaurants in lingerie shops, on unused railroad tracks, in people’s kitchens and attics, and in bus stops. There was a restaurant for babies. Cooks got creative, serving everything from crayfish soup on their boats to entrees made with grasshoppers. A Michelin-starred chef grilled hamburgers and gave them out for free.

In just six months, Restaurant Day had become a social movement, with events spreading across the country, and then the globe. Today, it’s even considered the world’s farthest-flung food carnival, with Restaurant Days taking place everywhere from Iceland to islands in the South Pacific. In Russia, the idea especially took off, resulting in some creative culinary endeavors, such as an intrepid chef cooking chicken in the steam of an old Soviet car motor. In Nicaragua, one restaurant owner took payment in the form of a poem or a song.

In a study from Finland’s Aalto University, researchers set out to find why Restaurant Day proved so globally compelling. “The participants found setting up a restaurant of their own a personally meaningful and ambitious project,” said researcher Henri Weijo in a university press release. “The movement’s leaders were not essential—instead, every participant was.” Indeed, from the beginning Santala took a hands-off approach. Rather than imposing a particular vision, he left it as a creative free-for-all with nothing more than a common date and food as the theme.

Helsinki could have turned it into a cash grab, fining hundreds for operating a restaurant without a license. “In the beginning, the authorities and the owners of regular restaurants vocally opposed Restaurant Day,” said Weijo. “However, it attracted such a wide range of participants that opposition was almost impossible.”

In fact, the city actually came on board. Grasping the appeal of Restaurant Day, Helsinki’s tourism website now features it as an attraction. Which is a pretty extraordinary achievement for an event that deliberately side-steps the law. (It helps that there have been no known instances of food poisoning stemming from Restaurant Day, according to Elisabeth Rundlöf, a marketing manager for the City of Helsinki.)

Other cities have made Restaurant Day participation difficult to varying degrees, but due to the number of participants, most turn a blind eye. Restaurants are shared on social media or by word of mouth. “You should go to Kallio,” Omar the ceviche seller told me, referring to a gentrifying neighborhood in Helsinki. “There will be hipsters doing hipster food for other hipsters.”

Sometimes, temporary Restaurant Day endeavors become permanent, such as Werner, a fancy Helsinki eatery on a swish street. Werner is known for roasting whole fish on an open-fire wood grill, but it had a humble start as a Restaurant Day sausage and donair kebab pop-up.

But Restaurant Day has done more than help some businesses get off the ground. In Helsinki, a city where it’s said that the only time people talk to one another is in the sauna, Restaurant Day has impacted the social fabric. You can actually approach strangers.

I struck up a conversation with a woman, Iiu Laitinen, selling ice cream from a cart outside an apartment complex. There were several lawn chairs set up, occupied by people enjoying her treats. I asked her if she had salmiakki ice cream, and she laughed. “Most people who speak English don’t ask for salmiakki,” she said. That’s true. The salty licorice flavor is an obsession in Nordic countries and an acquired taste everywhere else. I asked Laitinen why she chose this location. “Because I live in this building. And I need the power,” she said, pointing to a cord running through her front door. Her ice cream was made from condensed milk, yogurt, and flavors such as blueberry amaretto. She had come up with the idea while cleaning her new ice cream maker with alcohol.

In 2016, Santala stepped aside from running Restaurant Day, but remains a chairman of the board. Ironically, the activist was hired by Helsinki as a food culture strategist, focusing on market halls and cafeterias in schools, city-run offices, and senior housing. But someone was needed to run the Facebook page and update the map of pop-up restaurants. In 2018, Canadian Robert Courteau and two friends stepped in. At the moment, they’re creating a Facebook network of “Restaurant Day Ambassadors” to promote the event in their own cities.

Reactions to Restaurant Day can vary, even within the same city. Several years ago, city councillors in Montreal agreed to support the event. One councillor even opened his own restaurant. However, “cops don’t always get the memo,” Courteau says. On one recent Restaurant Day in Montreal, the police tried to shut down several pop-ups. Prague, on the other hand, “does a great job,” Courteau says. “They won’t make it easy, but you will not be shut down. All they do is ignore you. And that’s all you need.”

Soon, Courteau is hoping to get a coffee table book together, with photographs of Restaurant Days around the world. And the event is still spreading. “I was contacted by a Finnish guy who moved to Australia,” Courteau says. “He said, ‘There’s no Restaurant Day in Sydney. I want to get it started.’”