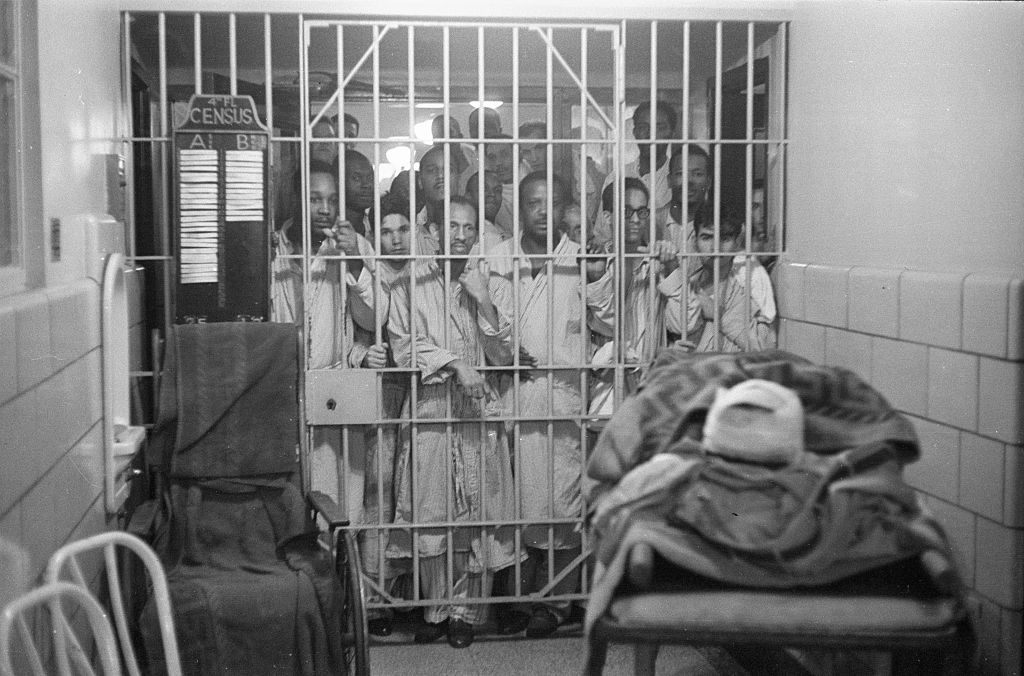 Prisoners at Rikers Island watch through bars as an injured airline passenger waits for transport to a New York hospital. LIFE Picture Collection/Getty Images
In This Story
Destination Guide

Peggy Benson wanted to get off the plane. The flight from New York’s Laguardia airport to Miami had already been delayed by hours. Scheduled to take off at 2:45, it was now 6pm. The city was blanketed in a snowstorm and passengers waited while crew de-iced the plane’s wings. Now she sat on board as snow fell outside and she was upset.

“She wanted to get off,” her husband Mason would tell The New York Times the next day, “The stewardess talked her out of it.” They were told that if they left, their bags would continue on to Florida without them. They stayed despite Peggy’s qualms, and the plane taxied down the runway and then took off, climbing into the wintry night.

It was February 1, 1957 and Northeast Airlines Flight 823 would remain airborne for about one minute before plunging from the sky and crashing onto Rikers Island, New York’s 400 acre prison complex.

“All of a sudden,” Peggy said, “Everything was afire. My husband pushed me toward a window.” She hit the ground and started running.

Prisoner Angel Gorbea was playing cards when the plane went down.

“Then,” Gorbea told the Times, “the explosions came. “Then the whole sky, even through the snow, was lighted. We stood at the windows. We saw the people tumbling out of that ship—they were all lighted, too, by the flames. We saw them and their shadows. We saw them stumble.”

Delphine Proelss Lowe was an 11-year-old inhabitant of Rikers at the time of the crash; her father was the island’s Episcopal chaplain.

”My mother and a houseman were preparing dinner when we heard a loud roar, saw a very bright flash and heard my mother scream,” she recalled 50 years after the disaster.

The plane’s left wing had been sheared off, the engine torn away and flames poured forth from the wreckage. It was a scene of chaos. People were on fire and struggled to escape, rolling in the snow as the storm continued around them.

“I was caught on my seat,” said Jacob Taub, a doctor from the Bronx. “Flames licking the back of my neck.”

Twenty people died in the crash, while 81 survivors either fought for their lives or tried to help others, many of whom were terribly burned. Isolated on an island, help would have to arrive by water. With just a small staff on hand, prison officials ordered prisoners be released to help the victims. Around 50 inmates rushed to help pull passengers from the wreckage.

Dazed survivors were taken wherever there was room; Lowe recalled a pianist with burned hands being brought into the chapel. Some were brought into the prison, where inmates peered through the bars at prone passengers laid out on stretchers.

Deputy Fire Chief Richard A. Denahan was on the Triborough Bridge when he heard about the crash on the radio and drove straight to a ferry landing, arriving at Rikers Island within a half hour to help crews on the ground.

The plane would burn for nearly two hours, leaving behind a smoking hull. Eventually, an investigation would decide that pilot error had caused the crash.

It was a frightening time for air travel. Just one month earlier, on January 31, 1957 a passenger plane in California manned by a crew of four had taken off for a test flight and collided in mid-air with a fighter jet. The wreckage rained down on Pacoima Junior High School, killing two students instantly. A third student later died of their injuries. After the crash on Rikers Island, the press would obsess over stories of near-misses.

There was the 62-year-old baker, Ben Opatowsky, who insisted on sitting next to an emergency door, even though his wife, Yetta, wanted to sit further back on the plane. Upon impact, he pushed open the door and “grabbed his wife by the hair and pulled her onto the wing, from where they leaped onto the ground.” There was Joan Sanger and her three-year-old daughter Mindy, who both had the bad luck to be taking their inaugural flight, and the flight attendant on the brink of retirement. LIFE magazine recorded the story of Robert Selmonsky, who dropped his pregnant wife and two year old son off for their flight, despite his misgivings about the snowstorm. As he drove away from the airport, he saw the explosion in the sky. (Both survived.) As the Times interviewed the badly burned pianist, Charles Naylor, his wife declared that she had had a premonition of doom. “My intuitions were so right, weren’t they, dear?,” she said. “That’s what is so frightening.”

Eventually every survivor was plucked from the island and ferried back to shore. A couple of months later, some of the prisoners who had helped save their lives would also board a ship to the mainland.

“We want to show society and the inmates that we are just as quick to reward and show appreciation for noble works as we are to punish for evil deeds,” Anna M. Kross, Commissioner of Corrections, told the Times. On March 8, 1957 11 men were freed as a reward for their rescue efforts. She refused to reveal their names, insisting that “publicity would have a detrimental effect upon them.” A few weeks later, the Times reported that the governor had commuted 11 more sentences, and that 46 sentences had so far been reduced.

Mark Kronen was only six weeks old when the plane crashed. An inmate discovered him buried in snow, and brought the infant inside.

“He saved my life, no question about it,” Kronen told The New York Post. “I probably would’ve died if he hadn’t of found me.” Kronen doesn’t know the name of the man who saved him.

The disaster captured the popular imagination for a period, even producing a TV dramatization that the Times declared “occasionally effective,” and then faded from memory. A mere day after the tragedy, even the lucky baker, Ben Opatowsky was making plans to resume his travels.

“We’re still going to Florida,” he said, “But it will be by train.”

A bunch of toxic mercury is suddenly missing from the bottom.
crash sitejailsairplanes

This Plane Crash Is Both Spectacular and, Thankfully, Injury-Free

She and her navigator disappeared nearly 80 years ago.
objects of intrigue