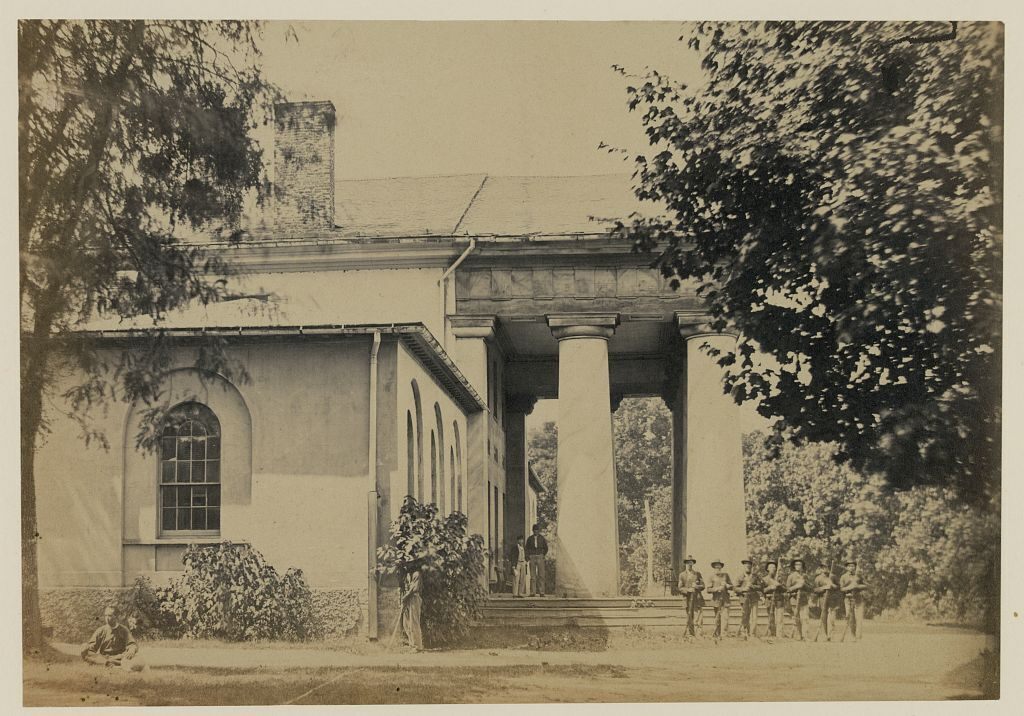 Union soldiers gathered outside Arlington House in 1864. Library of Congress
In This Story
Place

Soldiers were buried next to Lee's house in the center of Arlington Cemetery to dissuade the general from reclaiming his property after the war.
Destination Guide

On a hot afternoon in September 2018, 16 American soldiers buried two members of the Union Army in Arlington National Cemetery.

Those two Union soldiers, who are unidentified, lost their lives in the Battle of Second Manassas, in 1862. Their skeletons were unearthed in 2014, during archaeological work in a pit that mostly held amputated limbs of the injured who survived the skirmish. Following taps and a rifle salute, the Washington Post reported, the remains were lowered into the earth in simple wooden coffins, made from a felled battlefield tree, nested within modern caskets.

These are the most recent Union additions to the vast military cemetery in Virginia, just across the Potomac River from the nation’s capital. The earliest date to the Civil War itself, when Arlington wasn’t a cemetery at all, but rather a homestead squatted on by Union soldiers set on undermining its owner—Robert E. Lee.

From his wife’s late father—George Washington Parke Custis, the adopted son of the first president—Lee had inherited Arlington House, a hillside manse overlooking 1,100 beautiful, frustrating acres. Beyond the windows, the old oaks and elms offered generous shade, but the fields were soggy and useless. When Lee came into possession of it, the house had gone to seed. Beginning in 1857, recounts the historian Robert M. Poole in On Hallowed Ground: The Story of Arlington National Cemetery, Lee (and the dozens of enslaved people that Custis willed to his family) worked to revive the property by fertilizing the fields, repairing the roof and gristmill, and installing a toilet and a wood-burning furnace.

Lee left Arlington in April 1861, after resigning from the Union Army and accepting the rank of major general of the Confederacy. Almost immediately, Union soldiers set out to take over the plantation—a move both strategic and symbolic. It did not take a tactical genius, Poole writes, to appreciate the value in setting up a stronghold on a hill 200 feet above the rest of the landscape. “Any artillerist occupying that position could easily harass troopships plying the Potomac River, blow up the capital’s bridge crossings, and lob shells at the most tempting target of all—the White House, its roof peeking from the green fringes of trees just across the river.”

Local papers reported that Union troops were preparing to claim the estate almost as soon as Lee left. “Today it is expected that 10,000 of our soldiers will cross the Potomac and encamp on Arlington Heights,” the Adams Sentinel wrote on May 21, “their tents whitening the very ground on which is located the residence of Gen. Lee, the commander of the Virginia forces.”

Lee’s wife, Mary, fled after instructing servants to put away the carpets and curtains, and to find a new home for the cat, Tom Tita. The troops arrived by the thousands, and before they were called to the battlefield, Poole writes, they “acted as if they were on holiday.” They promenaded between the portico’s Doric columns, stuccoed and artfully painted to resemble marble. They got up to a little mischief: marking a few walls with triumphant graffiti, pilfering china made in Mount Vernon, and rooting through the possessions the Lee family left behind.

The family had some inkling of what was happening to their estate, thanks to a letter from Mary Lee’s cousin, Letitia Corbin Jones, who stole in for a look around. Poole excerpts her impressions: “The thefts & depredations there have been going on from the beginning,” Jones wrote. “I suppose there was not a paper or a letter, that had not been pried into.” Compared to other properties that had been ransacked, though, Arlington was largely spared, with the furniture, garden, and fences left intact.

Then war began. The death toll was enormous, and there was little infrastructure to deal with the relentless tide of bodies ravaged by bullets, bayonets, or disease. Soldiers who died on battlefields were often buried hastily, close to where they fell—sometimes beneath a makeshift marker, sometimes with nothing at all. In Washington, D.C., contractors did brisk business hauling, preparing, and burying bodies for $4.49 each. Fourteen newly established military graveyards, from Kansas to New York, began accepting caskets in 1862, but even these weren’t enough. By the following year, the capital’s primary military graveyard, known as Soldiers’ Home, reached capacity. Yet men kept falling.

Arlington started to seem like the right place to put a graveyard. Thanks to a statute that taxed real estate in Confederate territory, and sent property to auction when the landowners didn’t show up to settle their debts, the government acquired the estate in 1864, for $26,800.

The first man in the ground was Private William Christman. The 21-year-old enlisted with the 67th Pennsylvania Infantry, but died far from the battlefield after succumbing to peritonitis. He was interred beneath a pine marker, painted white, on May 13, 1864, a month before the land was formally designated a military cemetery. Christman was buried in a faraway corner of the estate, which would come to be known as the Lower Cemetery, and that’s exactly how the Union officers wanted it. “Not wishing to have the view marred by new graves,” Poole writes, “they directed the first burials well away from the house.”

That proscription didn’t last long. Officers were soon buried within view of the home, beginning with Captain Albert H. Packard, from the 31st Maine Infantry. He was laid to rest “about a hundred paces from the mansion,” Poole writes, at the edge of the garden where Mary Lee had once tended to jasmine, honeysuckle, and roses.

The burials that continued in the Lower Cemetery reveal the ways that racism and classism carried on after death. That area, which a War Department report described as falling on the border of “a little swale and marsh,” wasn’t well suited for graves, but, as of 1865, the report noted, was “still being used for the internment of colored soldiers.”

The designation of the site as a military cemetery came through in June 1864, when the Secretary of War, Edwin Stanton, approved a plan to set aside 200 acres, which wouldn’t interfere with the area settled by recently freed slaves.

Today, Lee’s former estate is the final resting place for more than 420,000 people. Though space is limited, funeral services continue six days a week, with in the neighborhood of several dozen a day. The two Civil War soldiers recently interred have joined many others, named and forgotten alike. “We have thousands of Civil War unknowns here already,” cemetery superintendent Katharine Kelley told the Washington Post in September. “These two, you could argue, are coming home to join those that are already here.”

At Woodlands Cemetery in Philadelphia, green-thumbed volunteers participate in a unique program.
death

Clyde Tombaugh discovered Pluto, and then hitched a ride toward it.
Video

Transgressors had to pay a heavy fine.
Read more
Thanks for sharing!