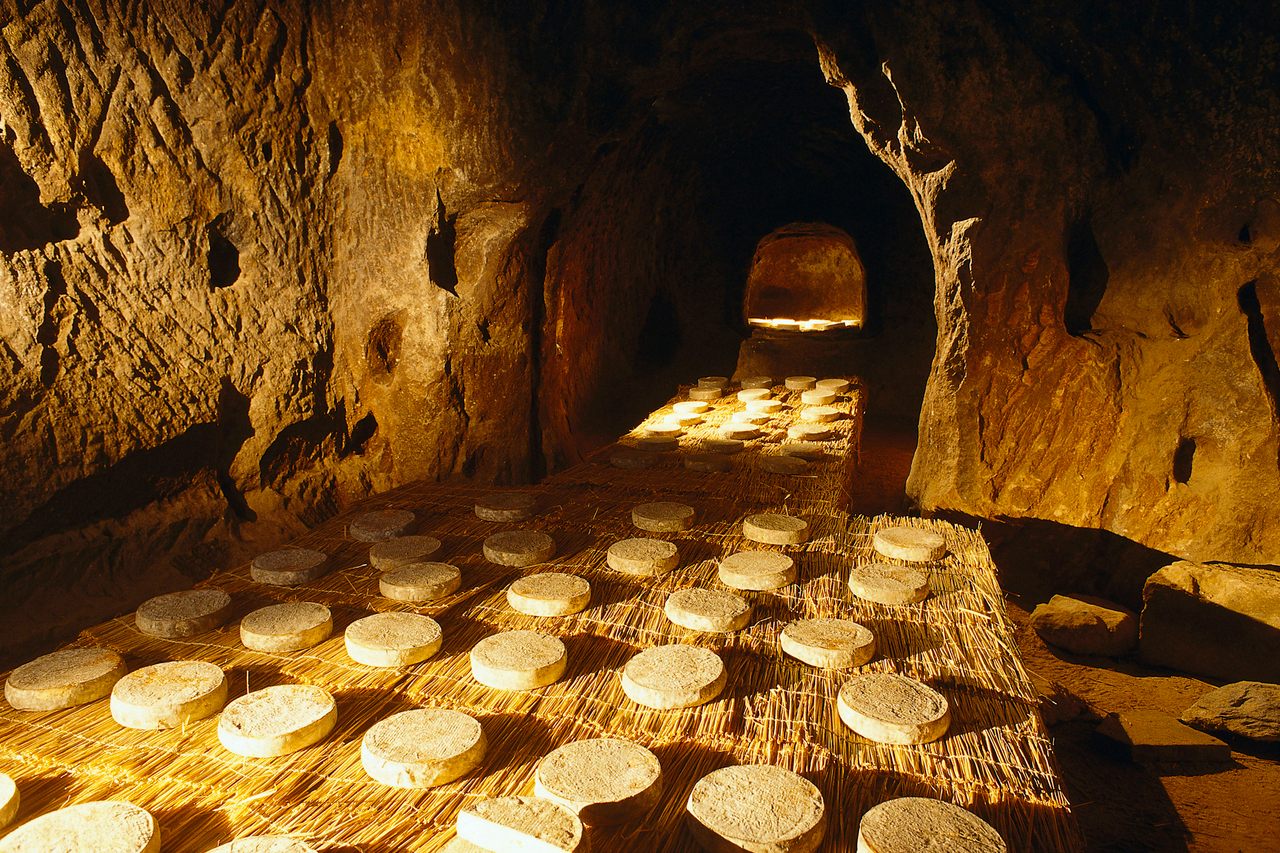 Saint-Nectaire cheese, ripening in one of its famed caves. Franz Marc Frei / LOOK-foto
In This Story
Destination Guide

Deep in the heart of the French countryside, surrounded by the Dore and Cantal mountains, lies a region of lush pasture dotted with grazing red Salers and Montbéliarde cattle. But 7,000 years ago, this area, known as the Auvergne, wasn’t quite so colorful. In fact, the mountains were actually active volcanoes, covering the countryside with lava.

Today, the resulting rich soil has made the Auvergne famous for its wine, its meat, and its Appellation d’Origine Protégée cheeses. Of 46 cheeses in France to have the coveted AOP label protecting their name, place of origin, and method of fabrication, the Auvergne is home to five: blue fourme d’Ambert and bleu d’Auvergne; firm Cantal and Salers; and washed-rind Saint-Nectaire, with its gray exterior and semi-soft, nutty interior. But while cattle grazing on this volcanic soil provide the milk for all five, Saint-Nectaire is a little bit different.

Named for a small village in the Puy-de-Dôme department, Saint-Nectaire cheese is actually made in 69 towns in the region. It’s one of the most heavily produced AOP cheeses in Europe—14,115 tons every year—even though it’s also made in the smallest area protected by the label. But that nearly 700 square miles of land is surrounded by 80 dormant volcanoes.

Caroline Borrell, a cheesemaker in Beaune-le-Froid, ages her cheese in hand-dug cellars dating to the 15th century. These cellars, located on the eponymous Rue des Caves, are part of the draw for cheesemakers in Beaune, which boasts six artisanal producers for just 584 inhabitants in the township area.

Stooping to enter the doorway into the dark cave cut right into the hillside feels a bit like climbing into a hobbit hole. Shelves of round, gray cheeses are arranged in chronological order in the darkness: the oldest to the right, with younger and younger cheeses following the natural curves of the dark, volcanic walls. These cellars naturally have the perfect pressure, humidity, and temperature to age this local delicacy. “I don’t need to do anything,” says Borrell.

Of course, she exaggerates, a bit. In colder weather, the cheese will age more slowly. When the humidity is lower, she might need to wash the cheese a bit more frequently in a brine solution to maintain the perfect downy crust. “But we adapt the cheese to the cellar,” she says. “Not the cellar to the cheese.”

This is not the case for other Saint-Nectaire producers, who rely on concrete cellars. Many use humidifiers, aeration, and temperature control to ensure that their cheese reaches the perfect doneness for selling. “They, instead, adapt the cellar to the cheese,” says Borrell.

While the work might be slightly more manageable in an artificial cellar, it’s hard to get exactly the right flavor profile in such conditions. So why would anyone bother?

The answer lies in modern food safety regulations. “When you look at the walls of a natural aging cellar, you can’t clean them,” says Marie-Paule Chazal, director of the Saint-Nectaire Joint-Trade Association. “And thank goodness—that’s part of their charm!”

But European food safety authorities aren’t nearly as charmed, leading to concerns that the traditional aging process could eventually be outlawed. “Soon, all of this heritage may well disappear,” says Chazal.

There is, however, a loophole allowing this ancestral tradition to continue, at least for a little while longer. “We inherited our cellar,” explains Borrell, who notes that it has been continuously used for several generations. “But once a cellar stops being used … we’re not allowed to use it anymore. You can’t take an abandoned cellar and put it back into use.”

About 10 miles away, in the town of Montaigu le Blanc, Sébastien Guillaume is also aging his Saint-Nectaire in natural, volcanic cellars. Unlike Borrell, Guillaume doesn’t milk his own cattle. Instead, he purchases young wheels of cheese from local farmers and ages them in cellars dug into this volcanic hillside in the 19th century, to store the plentiful wine produced in the Puy-de-Dôme. When local grapevines were wiped out by the phylloxera epidemic that swept France in the 19th century, Saint-Nectaire producers began using the empty cellars to age their cheese.

The third generation of his family to age cheese here, in cellars nearly 20 feet underground and joined up via tunnels by his grandfather, Guillaume is convinced of the superiority of a natural cellar for aging Saint-Nectaire.

“We’ve got great natural hygrometry, here,” he says. “I’ve got colleagues who need to water their cellars every day, to up the humidity. We don’t need to do that; it’s really in the air.”

Per Guillaume, despite concerns from European health authorities, there’s nothing innately wrong with a natural cellar at all. “We analyze the cheeses when they come in, when they go out,” he says. “When there’s a problem, that comes from your methods, not the environment. If your methods are right, there’s no problem.”

For Chazal, technology has kept up to such an extent that, today, artificial cellars can almost mimic the benefits of natural. “They’re built with semi-buried bricks, so you get some of the characteristics of an underground cellar,” she says. “You can make very, very good Saint-Nectaire in an artificial cellar.”

But she does note that to lose the rough-hewn volcanic cellars entirely would be to lose a piece of what makes the cheese special. Guillame agrees. “They tolerate the cellars, because the government understands that it’s part of the history of Saint-Nectaire,” he says.

But it’s more than purely history for Guillaume, who considers natural cellars essential to the integrity of his product. “When the cellar is empty, we don’t go in on Friday morning with a hose and wash and disinfect everything,” he says. “And that’s what happens in artificial cellars. And then you have to add everything back artificially. We’re lucky enough to not have to do that.”

“We’ve been aging Saint-Nectaire in our cellars since 1924,” he continues, “so in the air, there’s flora that’s indispensable.”

The results, he says, are striking. Even if he and a colleague source a raw cheese from the same local producer, the flavor of the final product will be different by virtue of the different flora in the cellar.

Borrell agrees, noting that in Beaune-le-Froid, her family has two different cellars.

“They’re less than 10 meters apart from each other,” she says, “but each cellar ages a little bit differently and lends a different flavor to the cheese.” This is part of what makes Saint-Nectaire so special. The AOP recognizes a “wheel of flavors” ranging from earthy to nutty, buttery to mushroomy, all of which may appear to greater or lesser degrees in any given cheese.

Even aboveground, volcanic soil is perhaps the most essential ingredient for the perfect Saint-Nectaire. The prairies allotted for Saint-Nectaire “have never been cultivated,” explains Chazal.

Instead, the volcanic soil is allowed to grow a richly diverse palette of grasses and flowers: Breckland thyme, gentian, yellow bedstraw, purple betony, and yarrow all grow wild, feeding the cattle and flavoring the milk even before it’s made into cheese and tucked into caves.

“There’s a diversity of flowers and species that you won’t find anywhere else,” says Chazal, who notes that in working with the National Botanical Conservatory of the Massif Central, the AOP was lauded for the richness of its terroir. “The first thing they said to us,” she says, “from the very beginning, was: ‘you’ve got no idea what you have beneath your feet.’”

A Peek Inside the Extremely Metal Life of Lava Crickets

Thousands died in 1986 when the crater lake unleashed a cloud of toxic gas. Could it happen again?
Video