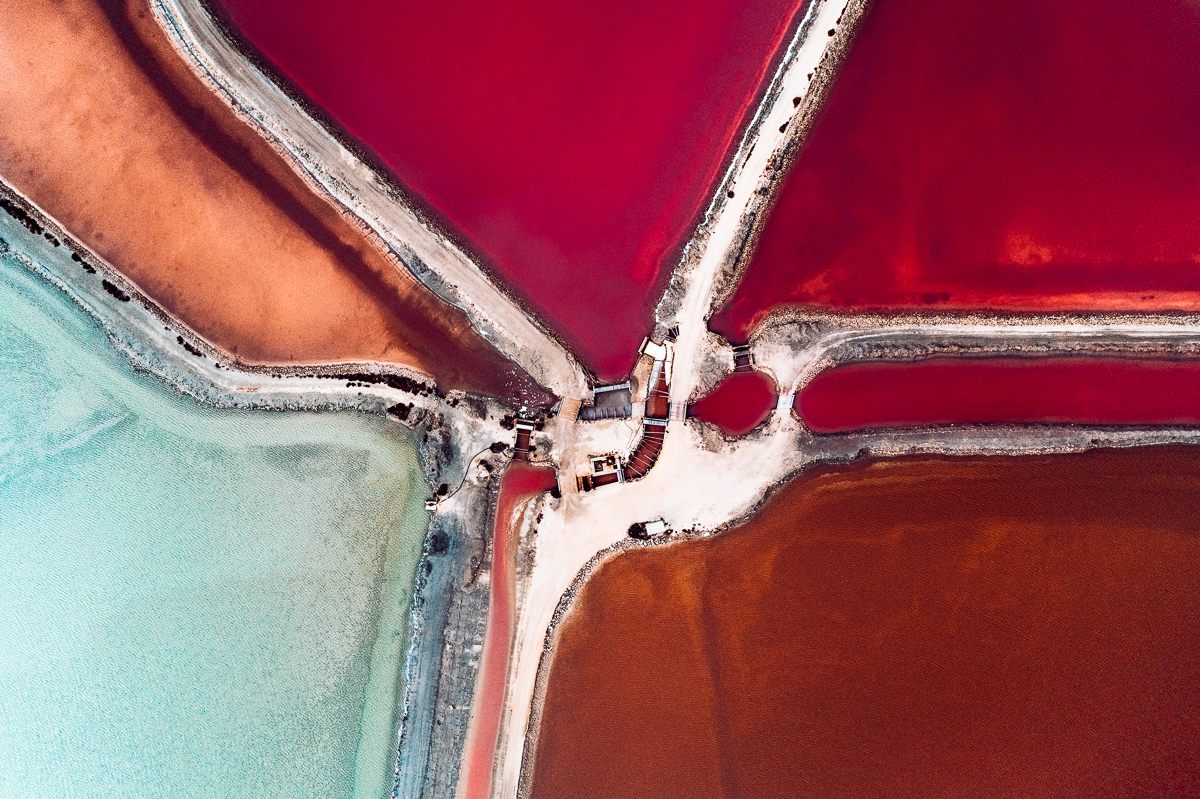 As an aerial photographer, Tom Hegen is used to seeing the world from a different perspective. But even he was astonished at how salt ponds look from above. “When I started on doing research for this project, I had a certain look of the result in mind,” Hegen says, via email. “I was then really amazed by the vibrant hues, textures and abstract shapes I observed. The size and landscape of those salt gardens is just overwhelming.”

Hegen captured his unique take on a centuries-old process using a DJI Phantom 4 Pro drone camera. “The Salt Series explores artificial landscapes where nature is channelled, regulated, and controlled,” explains Hegen. “Salt is a raw material that is now part of our everyday lives, but we rarely ask where it actually comes from and how it is being produced.”

Hegen’s series was shot around the Mediterranean, which is the ideal climate for salt production. Artificial pools, separated by sand or stone walls, are flooded with seawater. Slowly, the water evaporates, leaving behind brine, which is water with a very high salt concentration. “Each salt pond has a unique salt density,” explains Hegen. “Microorganisms change their hues as the salinity of the ponds increase.”

These microorganisms, which fall under a class of organisms known as halophiles (“salt lovers”), dictate the colors and include different types of algae. Algae-loving brine shrimp also contribute to the process. “As the water becomes too salty, the shrimps disappear, causing the algae to proliferate and the color of the ponds to intensify. The colors can vary from lighter shades of green to vibrant red.” At the end, “workers harvest the salt by delicately lifting it up from the floor,” says Hegen, noting that it is often done by hand.

From the ground, it’s difficult to assess the extent of a salt pond’s colors and shapes. They often stretch across a wide expanse of area—one salt pond facility on France’s west coast is nearly 5,000 acres. But as Hegen rightly guessed, from the air they are startlingly dynamic. He has a knack for reinterpreting landscapes: his aerial portfolio includes forests that, from above, look like polka dots and farms that appear like a patchwork of lines and squares.

In all of his aerial projects, Hegen highlights more than just unique angles or unseen patterns. He also uses aerial photography to investigate landscapes that have been changed by human activity. Several of Hegen’s projects relate to mining. One of the most startling is his Toxic Water Series, which shows pools of bright orange water against earth blackened by coal mining.

“I focus on landscapes that have been heavily transformed by human intervention and document the marks that we have left on the earth’s surface in order to meet our daily needs,” he says. “Aerial photography is a compelling way to document those interventions because it basically makes the dimensions of human force on earth visible.”

As part of his ongoing investigation into how humans have altered the natural world, some of Hegen’s work will soon be part of a book called Habitat. “I am fascinated by the abstraction that comes with the change of perspective; seeing something familiar from a new vantage point that you are not used to.” Atlas Obscura has a selection from Hegen’s Salt Series; you can find more of his work on Instagram.

Russia's Patriotic Alternative to Coca-Cola Is Made Out of Bread

For centuries, Russians have celebrated their Slavic roots with kvass.
saltvisualphotography

A satellite captures the stunning effects of heavy rain and high winds on a landscape that—coincidentally—is used to calibrate satellites.
salt

Iron-rich springs generate intense color in a stark landscape that, from above, might be mistaken for a crime scene.
islands

A photographer's drone's-eye image of the famous phumdis of northeastern India shows a unique environment undergoing change.
Want to see fewer ads? Become a Member.
From Around the Web
THE GASTRO OBSCURA BOOK
Taste the World!
An eye-opening journey through the history, culture, and places of the culinary world. Order Now