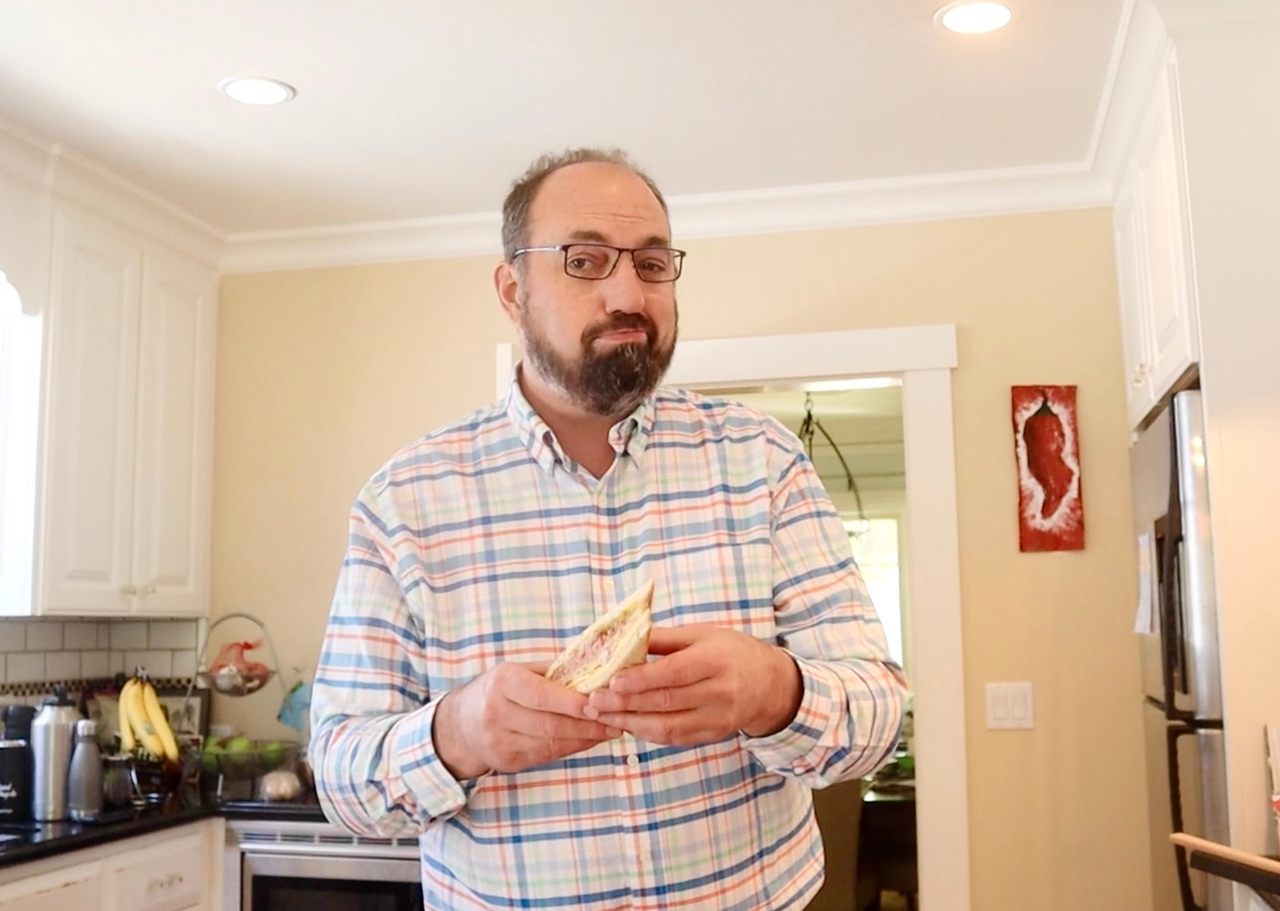 Elvis Presley once flew across the country to eat this decadent Denver sandwich.
Destination Guide

Like many good things in this world, “Sandwiches of History” started with buttered bread. In 2021, Barry Enderwick, a marketing executive, came upon a recipe book from the turn of the 20th century. Some of the recipes were straightforward; others were downright bizarre by modern sensibilities. Intrigued, Enderwick decided to find out what they were like for himself—and to tell people on social media about it.

Although Enderwick was no stranger to sharing his thoughts on the internet (he also runs a channel for reviewing chips from around the world, a cooking channel, and a channel where he discusses savory ice cream), he never expected this project to resonate in quite the way that it did. To date, he’s racked up more than 3.1 million views on TikTok by reviewing sandwiches ranging from the vile—such as a mashed anchovy sandwich he calls a “salt lick”—to the superb—like a French pan bagnat that requires two days, but winds up “crazy good.”

Much of the appeal of “Sandwiches of History” comes from its simplicity. As with the best of TikTok, its production values are next to nothing. Each episode delivers precisely what it promises: Enderwick, in his home kitchen, making a sandwich. For him, it really is all about eating his way through history, one loaf at a time.

A few of his creations are complicated, multi-day affairs, but the majority of his recipes have ingredient lists you could count on one hand. The sandwiches that stick with Enderwick are often those that are greater than the sum of their parts, like two slabs of Boston brown bread layered with onion and slicked with mayonnaise. “It was actually kind of good,” he says. “You soak the onion in water, which takes the bite out of it, then you have the sweet molasses notes from the brown bread. The mayonnaise just adds richness.”

Gastro Obscura spoke with Enderwick about one of Elvis’s favorite sandwiches, a Chinese recipe from 200 B.C.E., and how to make fake bananas in case of wartime rationing.

How did you come up with this idea?

I’ve been reviewing potato chips for longer. My friend Adam put me up to doing that. Then one day he sends me over this PDF for The Up-to-Date Sandwich Book of 1909. He goes, “These are kind of wild.” I’m like, “Yeah, I kind of want to make some of these.” The first one I ever did was the oyster sandwich.

How would you describe the oyster sandwich?

Slimy. It wasn’t fried oysters. It called for raw oysters chopped up, mixed with olive oil, a little bit of a Worcestershire sauce, and then put in between buttered bread with a leaf of lettuce. I like raw oysters on the half shell, but this was nasty.

Well, that is just genuinely horrifying. Where did you find this particular gem?

That was in The Up-to-Date Sandwich Book. At that point, I was only doing recipes from one book. Now I’ve got 10 or 12 old recipe books going on. One of the oldest sandwich recipes I made was just beef between buttered bread. It was from 1777. So it was about 15 years after the Earl of Sandwich supposedly created “the sandwich.”

But you’ve also got sandwiches that go way back before the Earl of Sandwich. What about the ancient Chinese sandwich you made from 200 B.C.E.?

The Earl of Sandwich got his name on it around 1762, but clearly people have been putting stuff between bread for longer than that. Rou jia mou, the Chinese one, was just phenomenally delicious.

That’s the one with the cumin-spiced beef. That looked great.

And I found out about it through the Gastro Obscura book!

What’s the most complicated sandwich you’ve wound up making?

I just did one not too long ago called the Milwaukee Sandwich. It has fried oysters. No idea why that’s associated with Milwaukee. This is from a different 1909 book called Salads, Sandwiches, and Chafing Dish Dainties.

It starts off by making your tartar sauce with chopped sweet pickles, chopped olives, chopped onions, and chopped celery. Then you have to squeeze that to get the liquid out. Then you have to shuck and fry the oysters. Then you dip three slices of rye bread in an egg batter and fry those like French toast. You top the bottom slice with the oysters, grate a little horseradish on that, then you put on another slice of bread, add sliced chicken breast, then on top of that you put bacon and another slice of bread, then you cut lemon into a square and put that on top.

I like how they had to add that extra little bit of fussiness. Why use a circular lemon when you could meticulously cut it into a square?

One of the things that the recipe had me do was make that tartar sauce and put it into a hollowed-out tomato to be kind of schmancy. It was pretty bonkers.

You’ve made the Fool’s Gold, an Elvis Presley favorite. What was that like?

It’s the one that Elvis flew to Denver for in his private plane and apparently ordered 20 of them. It’s a loaf of French bread that’s cut in half and gutted a little. Take some of the bread out, then fill it with a jar of peanut butter, a jar of blueberry preserves, and a pound of bacon. It’s actually really good, but it’s even better with a little chili powder on it.

That’s interesting, because the stereotypical Elvis sandwich is peanut butter, bacon, and banana. Speaking of banana, I saw that you did a recipe from 1941 for a fake banana sandwich. What was that like?

That was a recipe sent from someone in Manchester, England. I guess in the UK, they were big on banana sandwiches in the 1940s. During World War II, they couldn’t get fresh bananas, but banana extract was readily available and would last forever. So they figured out that if you boil parsnips, mash them, and then add banana extract and a little bit of sugar, you get pretty close to a mashed banana. I was shocked at how close it was to an actual banana. Especially if it’s wartime and you’re rationing, that’s a pretty good win right there.

It was everywhere at the turn of the 20th century. It was also inedible.
food

From boozy fruit preserves to tomato soup cake, we're looking back at a year of culinary curiosity.
cults

From Fruitlands to NXIVM, food has served as the core of Utopia and a tool of control.
Video • AO Docs