How a 'Bubble Expert' Decoded the Physics of Making Mezcal - Gastro Obscura
Want to see fewer ads? Become a Member. 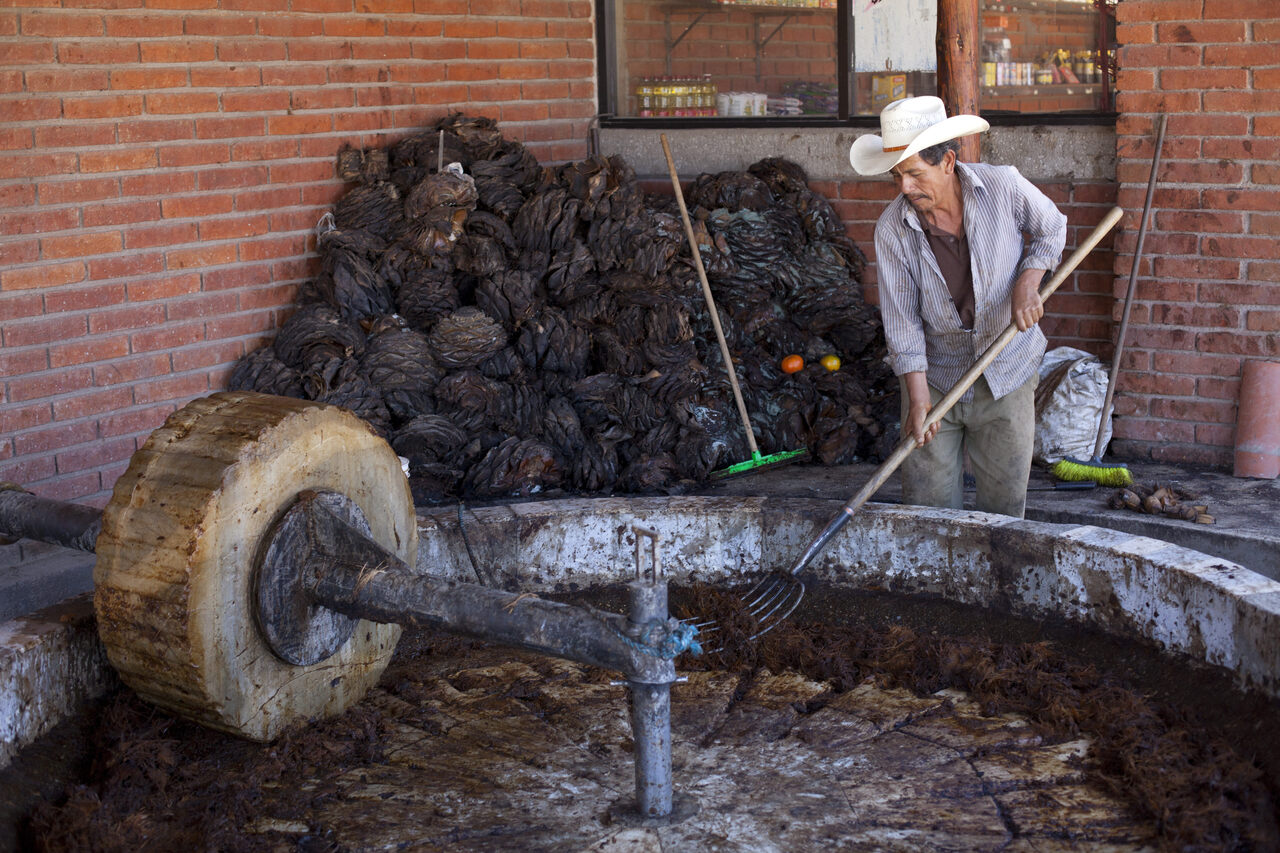 Agave is processed in Oaxaca to make mezcal. Phil Clarke Hill/In Pictures via Getty Images
In This Story
Destination Guide

In 2015, fluid physicist Roberto Zenit had a short conversation that turned into a five-year research project. Zenit, who calls himself a “bubble expert, despite how funny it sounds,” was intrigued when a student told him that bubbles play a crucial part in the production of mezcal, a distilled liquor made from agave plants by rural communities in Mexico. The student, whose family had distilled mezcal for generations, told him that producers tested if the liquor had the right amount of alcohol by squirting it into a small container and observing the lifetime of bubbles that form on the surface. If the bubbles, or “pearls,” last about 30 seconds, the mezcal is ready. If they don’t, the mezcal needs more distillation to reach the ideal alcohol content.

Five years later, Zenit and a team of researchers from three different universities proved that the traditional technique not only has sound scientific basis, but that the physics behind it is quite complex. Their findings were published in Scientific Reports.

“I think this research is so cool,” says ethnobiologist América Minerva Delgado Lemus, who just published a book about mezcal production and was not involved in the study. “It’s a much-needed dialogue between scientific and traditional knowledge.”

For more than 400 years, rural communities in 24 Mexican states have used more than 50 species of agaves to distill mezcal, a clear spirit similar to tequila. But mezcal production remains mostly artisanal: The agave plants are manually cut, their hearts braised in underground pits and then macerated with the help of a horse, and finally distilled one or two times in wooden barrels called tinas. In all cases, artisans check the alcohol content of the liquor using the bubble-producing method. Delgado Lemus says that the desired pearl pattern varies in each region, or even in each family or town. In Jalisco, producers look for tiny bubbles that gather on the edges of the container (a perfect “bead necklace”), while in Morelia, producers look for big, long-lasting bubbles that gather together in the shape of a honeycomb. Pearls are an identity marker of a mezcal’s origin.

To investigate the relationship between mezcal pearls and alcohol content, the team first watered down some mezcal samples and added ethyl alcohol to others. In both the extra-alcoholic samples and the watered-down ones, the bubbles burst immediately. In the unaltered samples, they lasted between 10 to 30 seconds. They repeated the experiments using a simple mix of pure water and alcohol in different proportions. Just like in mezcal, as the blend approached a half-and-half water-to-alcohol ratio, the duration of the bubbles peaked.

They had confirmed what mezcal makers had long understood: that alcohol content determined the duration of the mezcal pearls. But the real question—why it worked—remained unanswered.

The first clue was hidden in a small detail of those first experiments: Even the longest-lasting bubbles in the simple water-and-alcohol mix never lasted as long as the mezcal bubbles. As a bubble expert, Zenit had a hunch that mezcal, which retains many natural oils from the wood and plants involved in its production, was probably more viscous than water and alcohol. And viscosity is a key marker of bubble duration—a bubble in honey, for example, doesn’t burst as quickly as a bubble in plain water.

So Zenit used high-speed video cameras to confirm the hunch and put an end to the mystery. Instead, he found a new one. Rather than dripping from the bubble to the mezcal’s surface, the liquid seemed to be going up the bubbles’ membranes in defiance of gravity. That’s when he knew that “the explanation behind the practice is not trivial at all.”

They were observing a phenomenon called “the Marangoni flow.” Mezcal is filled with surfactants, chemical components that reduce surface tension. (They are why soap cleans clothes—they “loosen” the tension between fabric threads and soapy water, releasing dirt more easily.) Surfactants like to hang out on the surface of liquids, evenly distributed. When a bubble hits the surface of a liquid, it alters the distribution of the surfactants: More of them remain in the margins of the bubble while few hop on its dome. Surfactants will then “climb” over the bubble membrane to regain the perfect tension equilibrium. As this happens, the liquid creating the bubble is dripping down to the liquid surface, until the bubble bursts.

“I was really surprised to see the complexity of the system,” Zenit, now a professor at Brown University, says. He has already presented his findings to some mezcal producers in Mexico, who, he says, were “absolutely delighted and excited” to understand their culture from a different perspective.

Better understanding the tradition, says Delgado Lemus, could help the producers defend their heritage, which paradoxically has started to suffer as mezcal becomes an international darling. Some buyers have asked local producers to ignore the pearl-making process and instead produce mezcals with a lower alcohol content to make them more palatable to urban and international consumers. Delgado Lemus believes that “this research could give [producers] the confidence to better defend what they’ve known for generations.”

Care for a Taste of the World's First Tofu-Based Alcoholic Beverage?

Finally, you can get loaded on soybeans.
medieval

The Quest to Recreate a Lost and ‘Terrifying’ Medieval Mead

Bochet vanished for centuries, but meadmakers are bringing it back—at least in spirit.
science

After 14 months on the ISS, the vintage Petrus could be yours.
wine

The Battle to Bottle Palm Wine

It’s delicious, cherished, and difficult to commercialize. These entrepreneurs are bringing it to the United States.
Video

By night, this auto repair shop turns into a taquería serving up some of the city's finest al pastor tacos.
Tlalixtac de Cabrera, Mexico

Get three sheets to the wind at this desert winery with a nautical theme.
Oaxaca, Mexico

In a quiet residential neighborhood, one restaurant fights to preserve heirloom corn, one tortilla at a time.
Puerto Escondido, Mexico

In this beloved beach town, a secret seafood haven lies tucked behind a car wash.
Want to see fewer ads? Become a Member.
From Around the Web
Atlas Obscura Trips
Oaxaca: Tastes of Past & Present
View This Trip
Thanks for sharing!