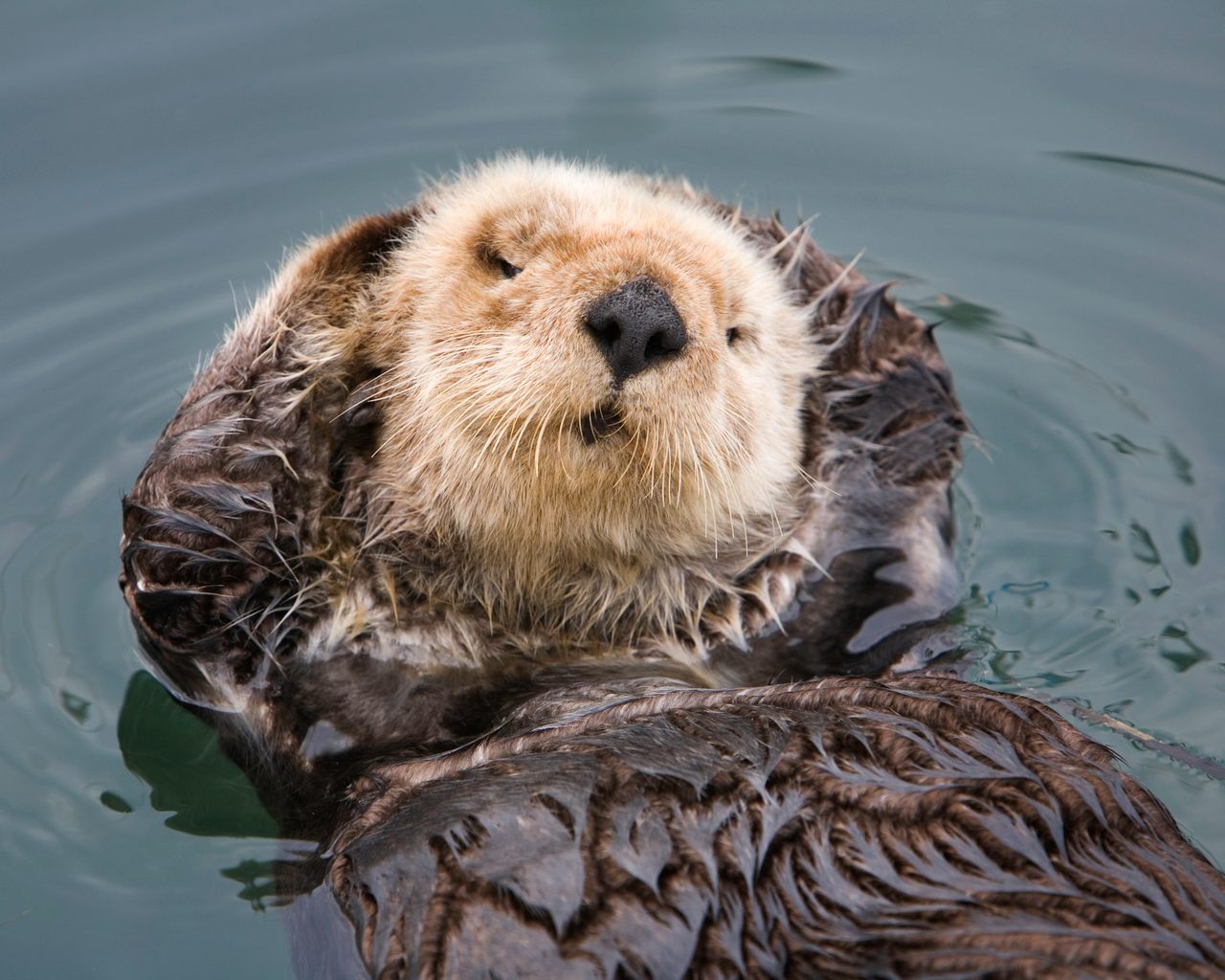 Sea otters, once hunted by humans for their fur and now adored for their cuteness, may be key to saving entire ecosystems. Doug Meek/Getty Images
In This Story
Destination Guide

Off the coast of California lies an underwater forest of giant kelp, a kind of seaweed that grows to 100 feet tall at the rate of a foot a day. Just as a terrestrial forest sucks carbon dioxide out of the air, all that rapidly growing seaweed soaks up carbon from the water, playing an incredibly important role in climate mitigation. “With kelp goes a huge amount of carbon,” says Chris Wilmers, an ecologist at the University of California, Santa Cruz. “As a general rule, kelp forests are much more productive than most terrestrial forests, in that they’re churning through carbon much more quickly.”

But since the 18th century, California’s kelp forest has been steadily mowed down by purple urchins, thanks to the massacre of their natural predator—the sea otter—hunted for its one-of-a-kind fur. (Unlike other marine mammals, sea otters don’t rely on copious amounts of blubber for insulation, but instead on densely packed hairs. At their thickest, they have a million of them per square inch.) Over the last few centuries, otter numbers in California crashed from 20,000 to 50.

Without otters patrolling the kelp, the native urchin population balloons. The spiky invertebrates actually switch up their foraging strategy, from hiding in rock crevices and waiting for detritus to come to them to boldly venturing out and chowing down. “Once the otters are not present, those urchins can overrun the area, and it turns into what’s called an ‘urchin barren,’” says Jess Fujii, the sea otter program manager at the Monterey Bay Aquarium. “And you really won’t see anything else except rocks and hard substrate covered in urchins.” Parts of the West Coast have seen a 10,000 percent increase in urchins in recent years, and California has lost 95 percent of its kelp forests.

So since 2002, the aquarium has been on a mission to bring back the otters with the cutest adoption program in the world. Sea otter moms in captivity take in orphaned pups—often left parentless thanks to great white sharks, which bite but don’t actually eat otters, since sharks prefer blubber to fur. The new moms teach the pups how to do sea otter things—like clean themselves, float on their backs, and use rocks to crack open sea urchins on their bellies. “We’re not hand-feeding them and imprinting them on humans—they’re learning how to be an otter from an otter,” says Fujii. “Some of these animals come in when they’re only a day old. They don’t have any notion of what home used to be.”

When the adoptees are ready, Fujii’s team sets them loose in the coastal habitats of California. Each is tagged and monitored closely for the first two weeks to make sure they’re getting along fine. (Along with observational surveys in Monterey Bay, tagging helps scientists conduct censuses of the otter population.) If not, they’re brought back in and returned to otter school. But the team found that the 37 adopted otters released between 2002 and 2016 have survived just as well as if they’d grown up fully in the wild. The reintroduced otters go on to reproduce and make more otters. Thanks in part to this first-of-its-kind program, the sea otter population along the California coast has swelled to 3,000.

A sea otter is a ravenous ecosystem engineer of the highest order. To stay warm and healthy, they eat a quarter of their body weight a day, repeatedly diving to the seafloor to gather urchins, crabs, and bivalves like clams. “By having to eat as much as they do in order to survive in their environment, they have really drastic impacts on those habitats, and they’re overwhelmingly positive,” says Fujii. (Another program further up the California coast has tried bringing back a different kind of “urchin slayer”—human divers.)

Keeping the urchin population in check preserves the kelp, which is vital for the ecosystem in two main ways. First, the forest is a habitat for fish, which are the food source for birds and other marine mammals, like sea lions. Second, the seaweed is part of what scientists call a “blue carbon” ecosystem, meaning a coastal or marine area that sequesters carbon. (Other areas include wetlands and mangroves.)

But it’s tricky to quantify exactly how much carbon a healthy kelp forest gobbles up. A redwood tree, for instance, grows to be massive over hundreds of years, locking away lots of carbon over long timescales. (Unless it catches on fire, in which case the carbon goes back into the atmosphere.) Things are more in flux underwater. All manner of critters, including sea urchins, are nibbling on kelp—and pooping out the carbon. Plus, the churning sea breaks off bits of the forest, which fall to the seafloor and decompose, releasing stored carbon. So a kelp forest constantly decays and grows back, sequestering and releasing carbon all the while.

It’s hard to be sure how long the carbon stays trapped. “The fate of all this kelp is not well understood,” says Wilmers. “Imagine that all that stuff that’s sloughing off is simply sinking to the deep ocean and isn’t going to come back up again for like 1,000 years. That’s a much more significant carbon sequestration benefit than just sloughing off and immediately decomposing and going right back into the atmosphere.”

With that uncertainty in mind, Wilmers has done some estimates of the potential carbon benefits of healthy otter populations farther north on the Pacific coast, between the Canadian border and the tip of the Aleutian Islands. If a kelp forest grows well, and half the carbon it absorbs is sequestered in the deep sea, it’d be the equivalent of canceling the emissions from 5 million automobiles. Even if just 1 percent of the carbon stays sequestered in the depths, that would be equal to the emissions from 100,000 cars.

In Monterey Bay, the otters don’t only protect the kelp. They also venture up the Elkhorn Slough, a large tidal marsh, where they encourage the growth of eelgrass, another coastal plant that sequesters carbon—although the otters affect the plant in a more indirect way. The otters eat crabs, which in turn eat invertebrates like sea slugs, which eat the algae that grows on the eelgrass. Reducing the number of crabs preying on the slugs actually helps the eelgrass because when the slugs remove the algae, it keeps the plants clean, which allows them to absorb more sunlight. Thanks to the return of the otters, the amount of eelgrass in Elkhorn Slough has jumped 600 percent in the last three decades.

A mangrove or a tidal marsh like Elkhorn Slough traps loads of carbon. “They’re removing carbon dioxide at rates that are up to 10 times as fast as we see in terrestrial systems on a per area basis,” says Emily Pidgeon, vice president of ocean science and innovation at the nonprofit Conservation International. “They bury it in the soil below them, and it basically gets locked away for millennia. And so you end up with these very deep, rich stores of carbon in these ecosystems much denser—and hence, with larger amounts of carbon—than you see in forests.”

Restoring marshland plays other crucial roles in the ecosystem, says Aimee David, vice president of ocean conservation policy strategy at the Monterey Bay Aquarium. “We need these habitats for the services that they provide for us: buffering from storms, food production, filtered water quality,” she says. “That is a great role that otters have played in the Elkhorn Slough estuary, which is one that is notorious for being at the epicenter of a lot of different industrial uses, including agriculture.”

Healthy ecosystems also support sustainable fisheries, providing livelihoods for community members. And the sea otters in Monterey have the added benefit of being very cute, which brings in tourists and their money. These kinds of knock-on benefits are why conservationists are increasingly campaigning for blue carbon-related nature-based solutions: restoring ecosystems to fight climate change. Everyone wins—the locals, the climate, the ecosystem. Well, maybe not the sea urchins and crabs. But they won’t be missed.