This 1905 Motorcar is the Only Automobile Manufactured in Alaska - Atlas Obscura
Want to see fewer ads? Become a Member. 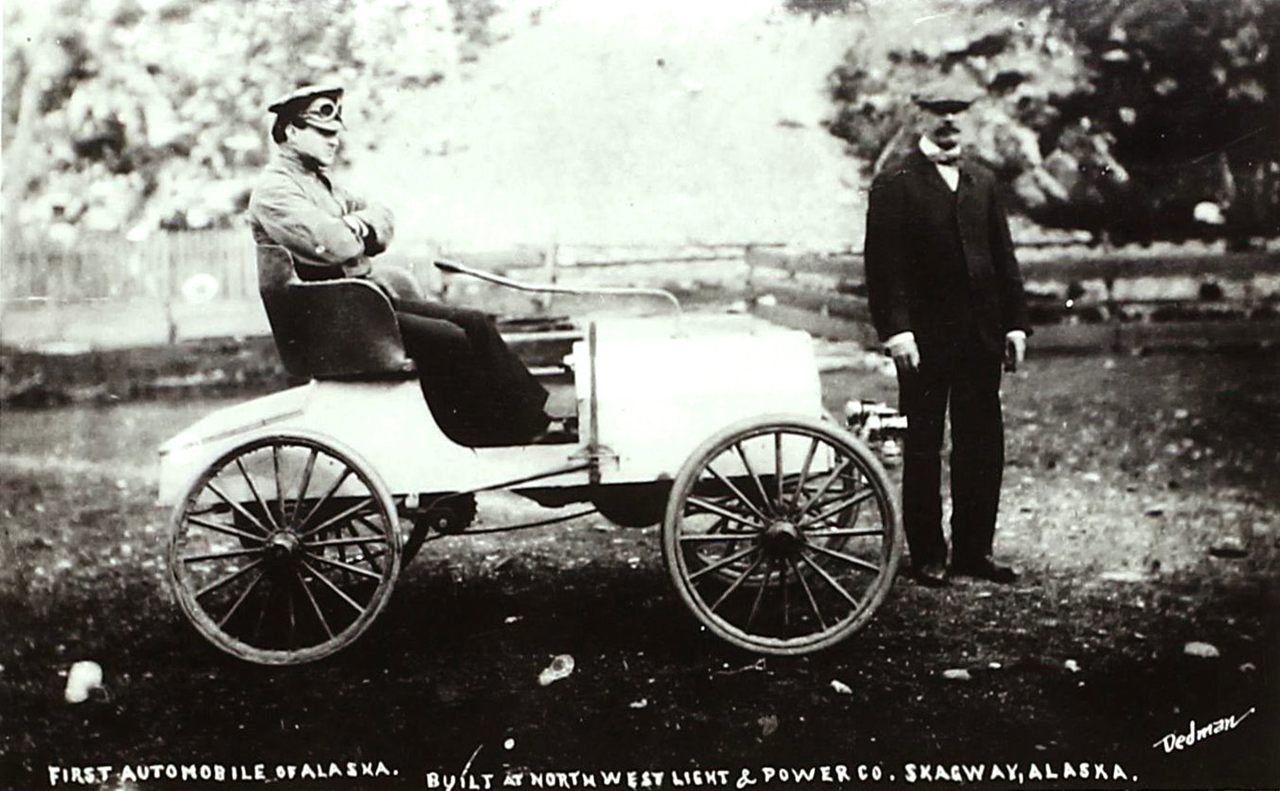 Built in 1905 from random porter cart parts, barstools, and a marine engine, The Sheldon was the first and only automobile manufactured in Alaska. Alaska State Library, Historical Collections
In This Story
Place

Bobby Sheldon’s vehicle is like the Mona Lisa. Just like the famous painting, the car sits in a room with grand masterpieces that are larger in scale, but arguably far less historically significant. The 116-year-old runabout is the first and only car manufactured in Alaska.

Known simply as The Sheldon, the automobile is currently on display at the Fountainhead Antique Auto Museum in Fairbanks, thanks to a long-term loan from the University of Alaska’s Museum of the North. It’s one of more than a hundred ultra-rare vehicles in the auto museum’s collection. Compared with other motorcars on display, such as a 1899 Hertel Runabout and a 1921 Heine-Velox Victoria—both of which have been meticulously maintained and are parked gleaming under showroom lights—The Sheldon doesn’t look like much.

Fountainhead museum curator Willy Vinton describes The Sheldon, built in 1905, as “a really green car,” adding, “It was basically built from whatever he could scrounge up, so everything was repurposed.”

The axles, metal wheels, springs, and chassis started their lives as parts of porter carts that carried goods back and forth on the docks in Skagway, a Gold Rush-era port town 700 miles southeast of Fairbanks. The seats had previously been bar stools. The hood was crafted from scraps of tin, the lever used to steer was a gas pipe, and two carbide mining lamps were installed as headlights. The engine? It was a single-cylinder marine engine that Sheldon had taken from a sunken boat in the harbor.

Part of the reason Sheldon’s car was so McGyver’ed was because the 21-year-old had never actually seen an automobile outside of newspaper clippings and magazine articles. He hoped if he could make his own, it would win him the fancy of a local woman.

As Vinton explains, the woman Sheldon admired was being escorted around town by the son of a wealthy doctor who happened to have an expensive horse and buggy. A vehicle, Sheldon thought, would be the perfect trump card.

“When he donated the car in 1931, one of the local reporters asked him ‘Mr. Sheldon, did you marry this girl?’ He said, ‘No, but three other fellows have since then,’” Vinton says, adding that the woman’s mother had told her to stay “‘away from Bobby. He’s a genius, but they’re only one step away from insanity’.”

Though the motorcar didn’t get him the girl, it did jumpstart his career. In 1913, Sheldon became the first person to drive a gasoline-powered automobile on the Valdez Trail, the main artery from the port city of Valdez to Fairbanks, more than 360 miles away. It was a considerable achievement: At the time, the route was little more than a narrow and bumpy trail for sled dogs and wagons carrying prospectors. The trip required crossing the Tanana River with two poling boats: the car’s front wheels in one boat, the back wheels in another. But Sheldon proved long-haul travel could be done with motorized vehicles, and soon after he started a freighting business that transported gear and people to Alaska’s interior.

Later in life, Sheldon became a road commissioner for the state. In that role he lobbied to improve the Valdez Trail, which is now known as the Richardson Highway. He was also the first person to bus visitors into what would become Denali National Park, ran a post office, and served in the state legislature.

Though Sheldon passed away in 1983 just shy of his 100th birthday, his legacy of ingenuity lives on. Says Vinton: “He did so much to shape how automobiles came to and were used in Alaska.”

For a century, a “fraternity of lunatics”—inspired by a driving pioneer and a 1980s movie—has raced across the United States. Is the newest record unbreakable?
objects of intrigue

The strange bronze artifact perplexed scholars for more than a century, including how it traveled so far from home.
objects of intrigue

Dwight D. Eisenhower and Marlene Dietrich both belonged to this unusual club.
Video • Wonder From Home