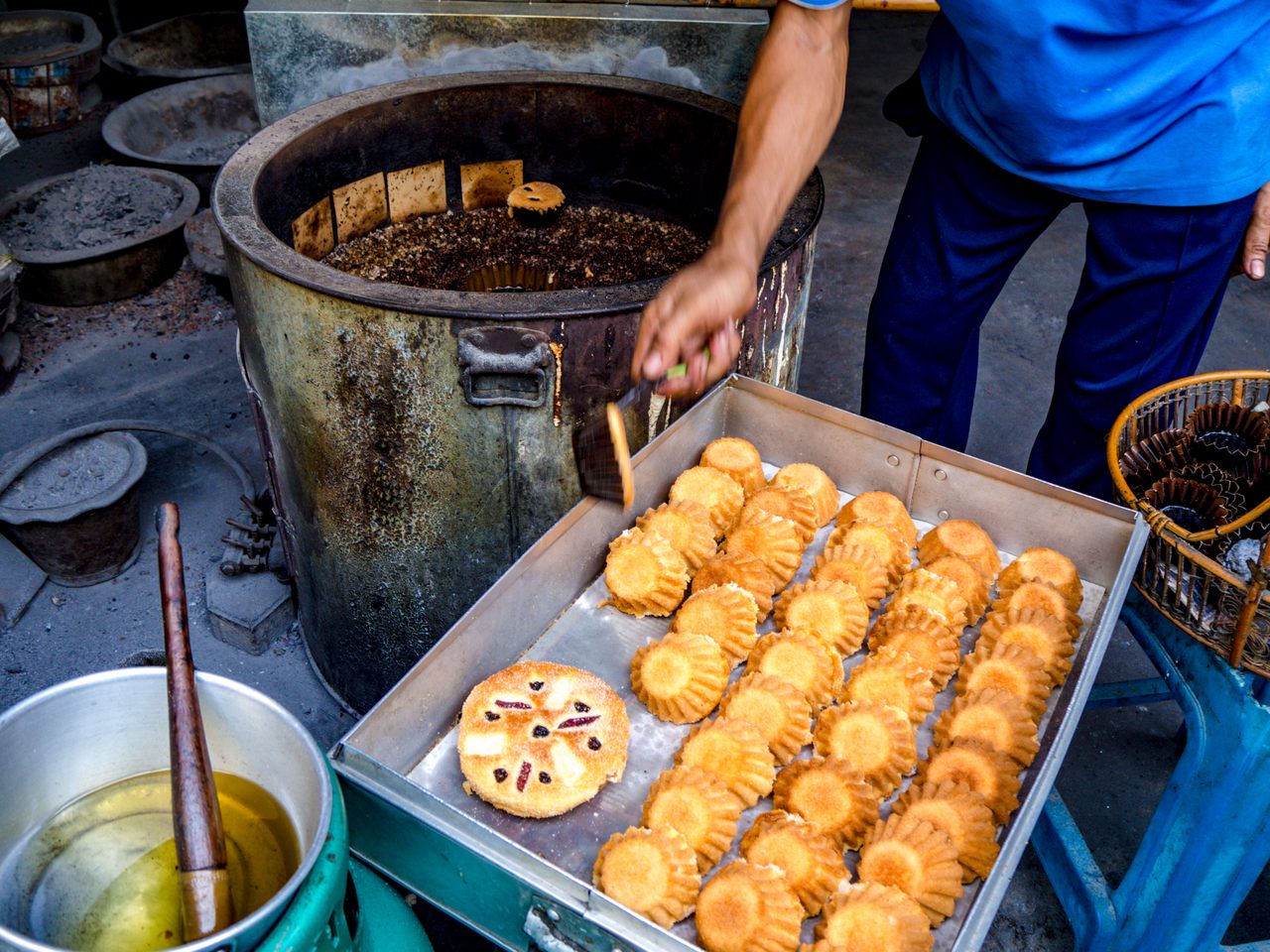 A baker at Kanoom Farung Lan Mea Pao picks freshly baked cakes out of the charcoal brazier and moves them to a metal box to cool. All Photos Nam Cheah for Gastro Obscura, unless otherwise noted.
In This Story
Destination Guide

On the western shore of the Chao Phraya river, south of the Wat Arun temple, lies Bangkok’s small Siamese-Portuguese enclave, Kudeejeen. Within its maze of narrow alleyways that weave past aging teakwood houses lies a 250-year-history of cultural commingling. In that time, the neighborhood has been home to Siamese-Portuguese, Thai, and Chinese residents of different religions. This diversity can be seen in the local architecture, with the Catholic Santa Cruz Church, the Buddhist Wat Kalayanamit, and the Kudi Khao Mosque a few minutes’ walk from one another. The combination of cultures is also deliciously evident in the enclave’s sweet specialty: khanom farang Kudeejeen, or the Kudeejeen “foreigner cake.”

Behind a bright teal door down an alleyway is Kanoom Farung Lan Mea Pao. The dark interior of the family-run bakery features big mixers in the corner, several blazing charcoal braziers in the middle of the room, and the sweet aroma of freshly baked khanom farang Kudeejeen. Along with Kanoom Farung Pa Lek and Thanusingha Bakery House, it is one of the only three bakeries that makes the cupcake. The small, golden discs resemble sweet muffins, their flat tops adorned with pieces of dried fruit—usually raisin, persimmon, and winter melon—and caramelized sugar. Crispy and crunchy on the outside and fluffy on the inside, the cupcakes are not made with raising agents. In fact, for such a rare treat, the cake itself has a shockingly plain ingredients list: eggs, wheat flour, white sugar, and the dried fruit.

Although it sounds simple, spinning these basic ingredients into khanom farang Kudeejeen is an art that dates back at least 252 years, to the time when Kudeejeen was established. Navinee Pongthai, a Kudeejeen native and the owner of the Baan Kudichin Museum, which chronicles the history of the enclave and the Siamese-Portuguese people, believes the cake’s origins might go back even further, to when the first Portuguese traders settled in the capital of Ayutthaya in the 16th century.

According to Pongthai, the cake is the result of Portuguese settlers and their descendents struggling to recreate European-style sweets. “At first, they tried to make cakes with rice flour, since wheat flour was hard to come by. But the cakes were too hard,” she says. While many classics of Portuguese confectionery revolve around sugar and egg yolks, the lack of available flour and milk forced Kudeejeen bakers to adapt. “Traditional Thai desserts are made from sugar, coconut milk, and duck egg yolks, which are very different than what they were used to. So the Siamese-Portuguese tried to make a replica of European cake without milk and butter.” The result is a cake that is less moist and more flat, as it doesn’t rise up like regular cupcakes, but is still fluffy and tasty.

Khanom farang Kudeejeen is not the first fusion dessert nor the most famous among Thais. Many of the most popular Thai sweets can be traced to Maria Guyomar de Pinha, an Ayutthaya-born woman of Japanese-Portuguese-Bengali descent who was married to a high-ranking Greek official in the 17th-century Ayutthaya court. One of her most iconic creations is foi thong, a nest of egg yolk–based golden threads boiled in sugar syrup. Anyone familiar with Portuguese confectionery will notice the treat’s striking similarities to Portugal’s fios de ovos. Another classic attributed to Guyomar de Pinha is sangkhaya, a coconut jam that may have been inspired by Portuguese custard. However, her recipes did not include cakes, making khanom farang Kudeejeen a dessert unique to the enclave.

Though the cake’s roots lie in the 16th-century intermingling of Portuguese and local traditions in Ayutthaya, it is forever associated with its home in Kudeejeen. After Burmese invaders sacked and destroyed Ayutthaya in 1767, many Siamese-Portuguese, along with other residents of the former capital, migrated to the kingdom’s new seat of power in the town of Thonburi. Here, the king gifted the Siamese-Portuguese community with the land that would become their enclave in 1769. The plot was a reward for aiding in the fight to successfully drive out the Burmese invaders.

Also spelled “Kudi Chin,” Kudeejeen’s name is a nod to a nearby Chinese temple and the local Chinese community. Diners can see the influence of these Chinese neighbors in khanom farang Kudeejeen’s toppings. Considered symbolic of health and fortune, the dried fruit was originally added to the cakes just for Lunar New Year celebrations. But the decorative, auspicious additions proved so popular that bakeries have since incorporated them into the cupcake year-round.

Thonburi’s time as a major hub was short-lived: The capital moved across the Chao Phraya river to what would become Bangkok in 1782. But the Siamese-Portuguese community of Kudeejeen stayed put. Still very close to the capital, Thonburi is now a district within greater Bangkok. Despite the staggering size of Thailand’s largest city—it has an estimated 10.7 million residents as of this year—just the three, hole-in-the-wall bakeries continue to make khanom farang Kudeejeen from their small, diverse enclave. For the Kudeejeen locals, they are a special occasion treat and a New Year staple or gift. For visitors, they are a great souvenir and a must-buy when visiting the area.

While not all of us have our own charcoal brazier, it’s still possible to make a version of khanom farang Kudeejeen at home with the recipe below.

Yield: 10–12, depending on the size of your cupcake liners and muffin pan

For the cupcakes:
6 eggs (the small eggs used in this recipe were around 45 grams each)
1/3 cups of flour
1/2 cups of fine white sugar
A splash of vanilla extract (optional)

For the toppings:
2 tablespoons of assorted raisins and dried fruit
1 tablespoon of white sugar

1. Preheat your oven to 360° F and place the cupcake liners in the muffin pan.

2. Measure out all the ingredients and set them aside. As there is no raising agent, the fluffiness of the cupcakes relies entirely on the aerated eggs, so it’s important to move quickly. In a mixing bowl, add the eggs, sugar, and—if desired—a splash of vanilla extract, then beat the ingredients using an electric mixer until the mixture is foamy and very pale. This should take at least a minute; the mixture should double in size and be a little stiff.

3. Gradually sieve and stir in the flour (do not pour it in all at once). If you end up with lumps, whisk the mixture again with the electric mixer. Make sure to do it swiftly so that it doesn’t deflate. Don’t worry about it being too runny. If the cupcakes are thick with too much flour, they will become too dense.

4. Fill up each cupcake liner to 3/4 full and place the tray in the oven.

5. Let the cupcakes bake for two minutes before adding the dried fruit on top. Add as many as you like then sprinkle the cakes with some sugar before putting them back in the oven.

6. Let the cupcakes bake for 12–15 more minutes before pulling them out (check about halfway through and rotate the tray if they’re baking too much on one side). Do the toothpick test to check if they are ready. They might deflate and wrinkle a little afterward, but that is normal.

Why Does Iceland's Fagradalsfjall Volcano Look Like a School Science Project?

A restaurant in Amman preserves the cooking traditions of a diaspora.
food

Born in an era of rations, these scrappy recipes relied on cheap pantry staples.
saints

Making the Miraculous Cake of the Patron Saint of Bakers

A three-table eatery sits inside the home-kitchen of a seafood virtuoso in Bangkok's Chinatown.
Bangkok, Thailand

A condom-covered Thai restaurant that is more concerned with birth control than food.
London, England