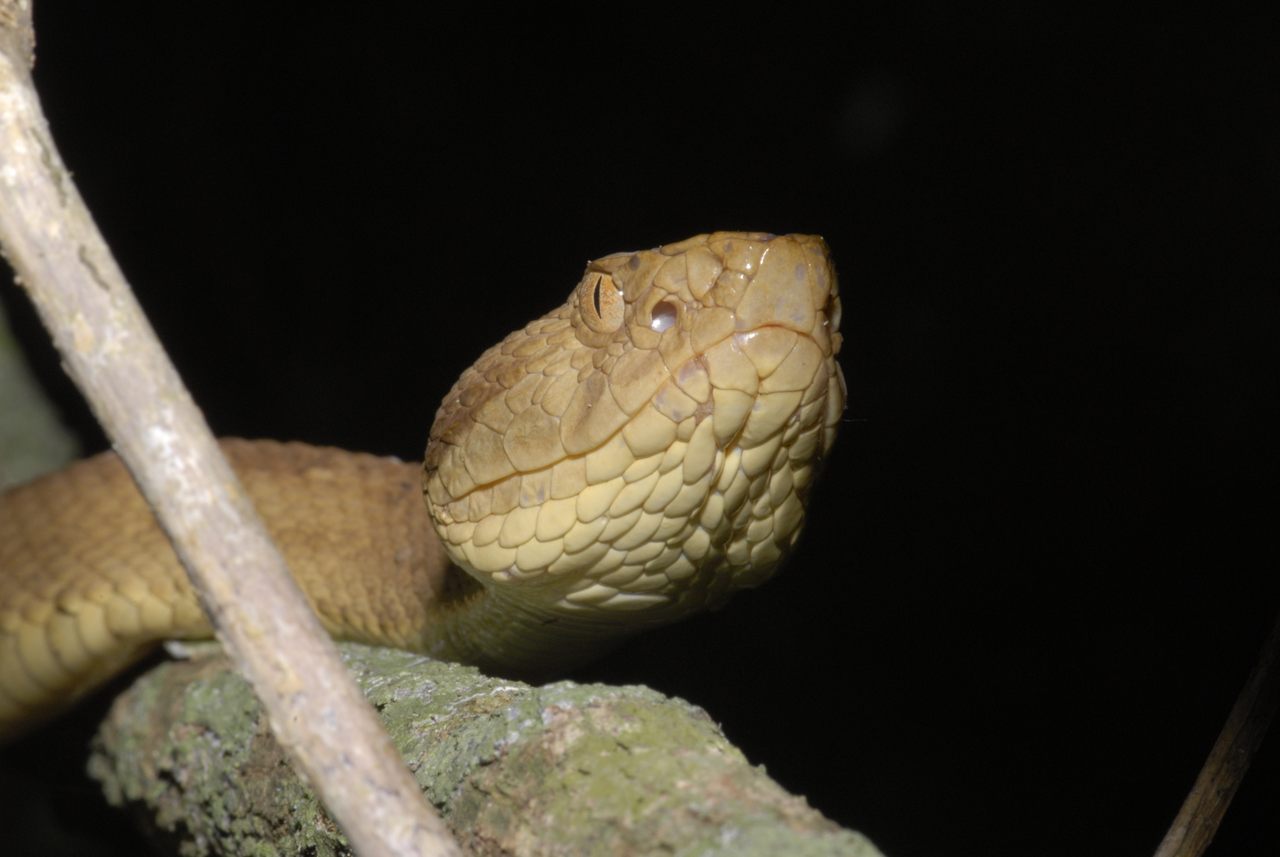 A snake farm famous for its venemous varieties.
Destination Guide

The four-foot-long body of a golden lancehead viper coils into a ball. Its scales are less golden and more a pale yellow-brown, like Dijon mustard. Its unblinking eyes, watchful through the terrarium glass, give it an intimidating look appropriate for one of the world’s most feared snakes—even though the viper isn’t particularly aggressive to humans unless provoked. “Compared with other species, the golden lancehead is calm to work with,” says Selma Almeida, a biologist at Brazil’s Instituto Butantan, where the snake is currently a resident. “They are nowhere near as aggressive as some of the other snakes we keep here.”

The golden lancehead (Bothrops insularis) gained notoriety because, in the wild, it is found only on Ilha da Queimada Grande, known to the world as Snake Island. Located about 20 miles off the Brazilian coast, south of the city of São Paulo, the roughly 100-acre island is home to approximately 3,000 of the vipers, creating one of the highest population densities of snakes anywhere in the world. Despite this localized superabundance, the golden lancehead is critically endangered and will likely be lost without human intervention. So, after more than 30 years of being one of the few scientists permitted to carry out fieldwork on the infamous island, Almeida is now trying to recreate the animals’ habitat at Butantan, in the middle of São Paulo.

The golden lancehead is an evolutionary descendant of the jararaca viper (Bothrops jararaca), found in parts of Brazil, Argentina, and Paraguay, where it hunts small rodents and marsupials. The jararaca is also highly venomous, but the golden lancehead has unusually fast-acting venom, which scientists have determined is a result of its natural prey: birds. While two bat species are present, Snake Island has no rodents or other small terrestrial mammals, so the viper evolved particularly potent venom to kill prospective meals before they had a chance to fly away. Now, however, numbers of the vipers’ prey—migratory birds that make an ill-advised stopover on Snake Island—are dwindling thanks to rampant deforestation of Brazil’s Atlantic rainforest.

The island itself has not escaped the impact of human activity. Today, Ilha da Quiemada Grande is uninhabited and access is limited to the Brazilian military and researchers. But Snake Island was once home to a small number of people who staffed a lighthouse—they also introduced destructive invasive species and practiced slash-and-burn agriculture. The human residents left when the lighthouse was automated nearly a century ago, but they had already forever altered the unique and fragile ecosystem where the golden lancehead had evolved, creating new challenges for the snake.

Yet the greatest threat to the viper’s survival comes from its many admirers. The golden lancehead is coveted around the world by private collectors who are willing to break international laws and pay a small fortune to get their hands on a specimen. The price of a single golden lancehead sold on the black market can exceed $30,000, and traffickers are known to make illicit visits to the island to capture snakes. Every snake trafficked off the island raises the risk of inbreeding in the wild population, which can result in infertility and a compromised ability to adapt to environmental change. “We’ve estimated that the removal of just 40 vipers from Ilha da Queimada per year would be enough to cause a loss of genetic diversity in the species that would more or less guarantee extinction,” says Butantan researcher Otávio Marques.

The Butantan team decided that, to maintain the viability of the golden lancehead, they had to establish a captive breeding program on the Brazilian mainland. After years of bureaucratic wrangling—authorities were understandably concerned about bringing the infamous species to the middle of a large city—expeditions to the island about a decade ago brought a total of 20 vipers to their new home at Butantan.

“Programs like this are absolutely essential. Especially for species such as the golden lancehead which occupy such tiny ranges and are so few in number,” says Bryan Fry, a toxicologist at the University of Queensland who has made multiple visits to Snake Island to study the rare snake. “The golden lancehead numbers on the island are dropping, without a doubt, so it is vital to have insurance populations like this.”

Almeida, whose expertise is in reptile reproductive biology, took over care of the new arrivals. “When the vipers were first brought here, Otávio jokingly told me, ‘look after them as if they are your children’,” she says. Under her charge, the golden lanceheads have thrived, and bred several times; the population now stands at 50 individuals. “I’ll always remember when we gave the first pregnant female an ultrasound and I saw the little vipers developing inside her, it was one of the most rewarding moments of my career,” says Almeida.

But breeding a small number of golden lanceheads at the institute is only part of the solution. Ensuring the genetic diversity of the species as a whole means managing the captive and wild snakes as a single population, with gene flow between the two groups. Using male vipers from the captive colony, the team is currently researching the optimal methods of sperm collection, transport, and storage in hopes of one day using sperm from wild snakes to impregnate captive females. “We know that technologies like artificial insemination and cryopreservation are going to be essential tools for conserving the lancehead so we are working on building a frozen sperm bank for the species,” says Almeida.

Feeding the vipers is considerably less complicated than supervising their sex lives. Although wild golden lanceheads subsist almost exclusively on a diet of birds, those at Butantan are not fussy eaters, and readily devour the rats and mice offered to them. This may, however, pose a problem in the future if the vipers become too adapted to captivity, and lose genes that govern behavior essential to survival in the wild—a phenomenon known as “genetic domestication.” In a small captive population of an endangered species, this can occur in just one generation, and seriously undermine plans to release the offspring into the wild. So the Butantan scientists have hatched an ambitious project to keep their snakes from becoming slouches.“If we’re going to eventually release golden lanceheads back into their natural habitat, we’re going to have to replicate the conditions of the island here,” says Almeida.

A new outdoor enclosure, currently under construction at Butantan, will bring a microcosmic slice of the viper’s natural habitat to the institute. The 4,300-square-foot space will feature an array of plants native to Snake Island, including bristling bromeliads, dense tangles of maria-faceira shrubs, and statuesque queen palm trees, giving the vipers the chance to practice their natural arboreal behavior. The island’s seasonal changes in temperature and humidity will be simulated to encourage breeding. The snakes will also hunt live prey. “To be functional predators, able to survive in the wild, the vipers need to be able to hunt birds as they would naturally,” says Marques. The team is currently in discussions over the most ethical approach to live prey and other details, such as the bird species best suited to be viper victuals.

In spite of the challenges ahead, Almeida remains hopeful about the future of the viper, an optimism arising from awareness that conservation is a marathon, not a sprint, and a deep appreciation for the tenacity of this remarkable reptile. “The golden lancehead is a resilient species, it survived against the odds and evolved in a very harsh environment,” Almeida says, adding, “All it needs right now is a little help from us.”

Discovering the trait may help scientists protect the tuatara, which has been around since the dinosaurs.
snakes

An endangered species is thriving at a once-blighted lot, but climate change and other challenges threaten its future.
islands

Scientists, residents, and visitors have banded together for a massive biodiversity survey of British Columbia's Galiano Island.
Video • AO Docs