A hidden "place of interment for gentlemen."
Place

A hidden "place of interment for gentlemen." 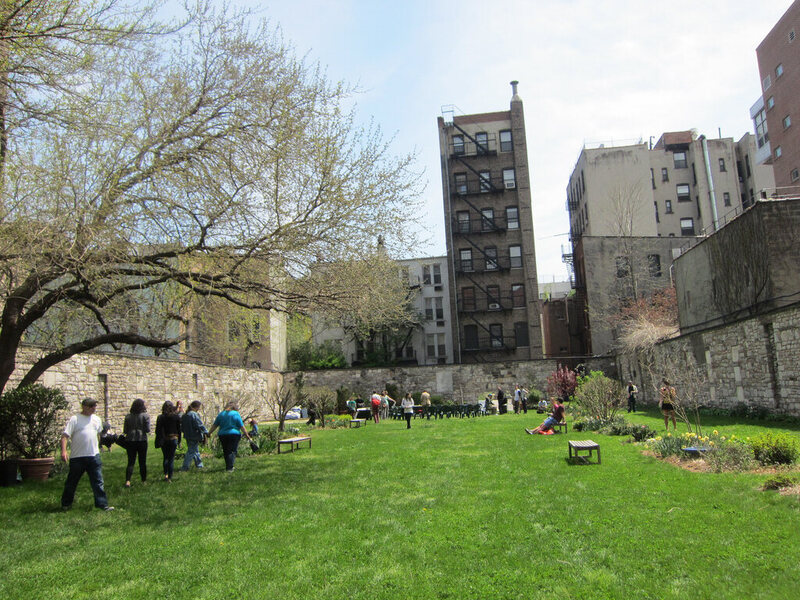 New York Marble Cemetery (photographs by the author unless indicated)

Few cities are as alive as New York, where people and buildings are in a constant flux of growth and change, so it’s surprising that even in the most developed parts of Manhattan, some secret places remain reserved for the dead. Last weekend, Obscura Society NYC  visited a few of these burial grounds. We started at the New York Marble Cemetery at 4 1/2 Second Avenue in the East Village, which is usually locked behind a gate leading to a long alley and a glimpse of green grass. Gate to the New York Marble Cemetery on Second Avenue Caroline Dubois, the president of the New York Marble Cemetery, gave us an engaging overview of the small 19th century cemetery’s history. The oldest public non-sectarian cemetery in New York City, it was set up as a reaction to fears of epidemics that had instigated laws outlawing earth graves. Instead, all of those people buried in the cemetery were interred in one of the 156 vaults built from Tuckahoe marble, the same white stone used to build the US Capitol and Brooklyn’s Borough Hall. Walking into the space, it appears more like a garden than a cemetery. At the time, gravestone markers were considered by some to be tacky, so instead vault owners had their names simply etched on marble plaques that are still affixed to the walls. One of the larger plaques once read: “New York Marble Cemetery — A Place of Interment for Gentlemen,” but sadly it has long ago worn down under the city’s rough conditions. Yet even without that grand proclamation, there’s still a stately air around the place, and a reminder of the 19th century gentlemanly neighborhood that transformed into the East Village we know today. Caroline Dubois discussing New York Marble Cemetery (with Allison Meier of Atlas Obscura, aka the author of this post, to the right) (photograph by Mitch Waxman) View to the west of the New York Marble Cemetery

The large part of the 2,080 burials in the New York Marble Cemetery occurred between 1830 and 1870, although descendants of vault owners, including Dubois herself, can still have it as their final resting place. It might seem like an astounding number for such a small place, but being that these were “natural” burials, decomposition happened quickly so that many family members could be entombed in the same vault. On their website, the cemetery maintains a fascinating list of the causes of death of its eternal residents, showing what the trials of mortality in the 19th century, from still births to “convulsions” to whooping cough to “feebleness of birth” to scarlet fever to “mortification.” View to the west of the New York Marble Cemetery

Burials tapered off in the 1830s with the opening of rural cemeteries like Green-Wood Cemetery in Brooklyn where families could build grand mausoleums. While the cemetery has had some wear over the years with crumbling walls and the tearing down of its Death House, which once stood at the southwest corner and held bodies before burial, it is stil a lovely place to spend a beautiful spring afternoon with a quiet and openness that is rare in Manhattan. The cemetery has open days during the warmer months (the full schedule of open days is available here), and you can even rent it for a private party if you so desire. Like the Marble Cemetery, the New York City Marble Cemetery was quite fashionable in the mid-19th century, and President James Monroe was even buried there, although he was removed to Richmond, Virginia, in 1858, about 20 years after his death in 1831. From the New York City Marble Cemetery, we walked up to St. Mark’s Church-in-the-Bowery. Few of the people who walk by the well-trafficked church likely know it has a cemetery resting beneath it and to either side. The plaque marker for Peter Stuyvesant is on the left

In fact, one of the most famous New Yorkers of all time, the final Dutch Director-General of the New Netherland colony Peter Stuyvesant, whose farm (or “bouwerij”) used to be where much of the East Village now stands, is interred in a vault beneath the church. There are also flat markers in the churchyard and a memorial fountain facing First Avenue. Burials still take place there, although now only cremated interments are allowed. Our last stop was the Second Cemetery of the Congregation Shearith Israel on 11th Street and Sixth Avenue. It was much larger than the small triangle it is now when it was opened in 1805, but with the grid system implemented on Manhattan, 11th Street cut through much of it in 1830 and it was reduced to its present small size. The cemetery, where tombstones still lean against the wall beneath the shade of two evergreen trees, was established by Shearith Israel, once NYC’s only Jewish congregation with members of Spanish and Portuguese descent. Now it is one of the quiet reminders of a New York that once was, and still exists if you know where to look.

Thanks to all who joined for the walk to some of NYC’s overlooked cemeteries, to Mitch Waxman for the fantastic photographs, and especially to Caroline Dubois at the New York Marble Cemetery! We hope to do more exploring of the city’s buried history soon.

Notes from the Field: Museé Fragonard