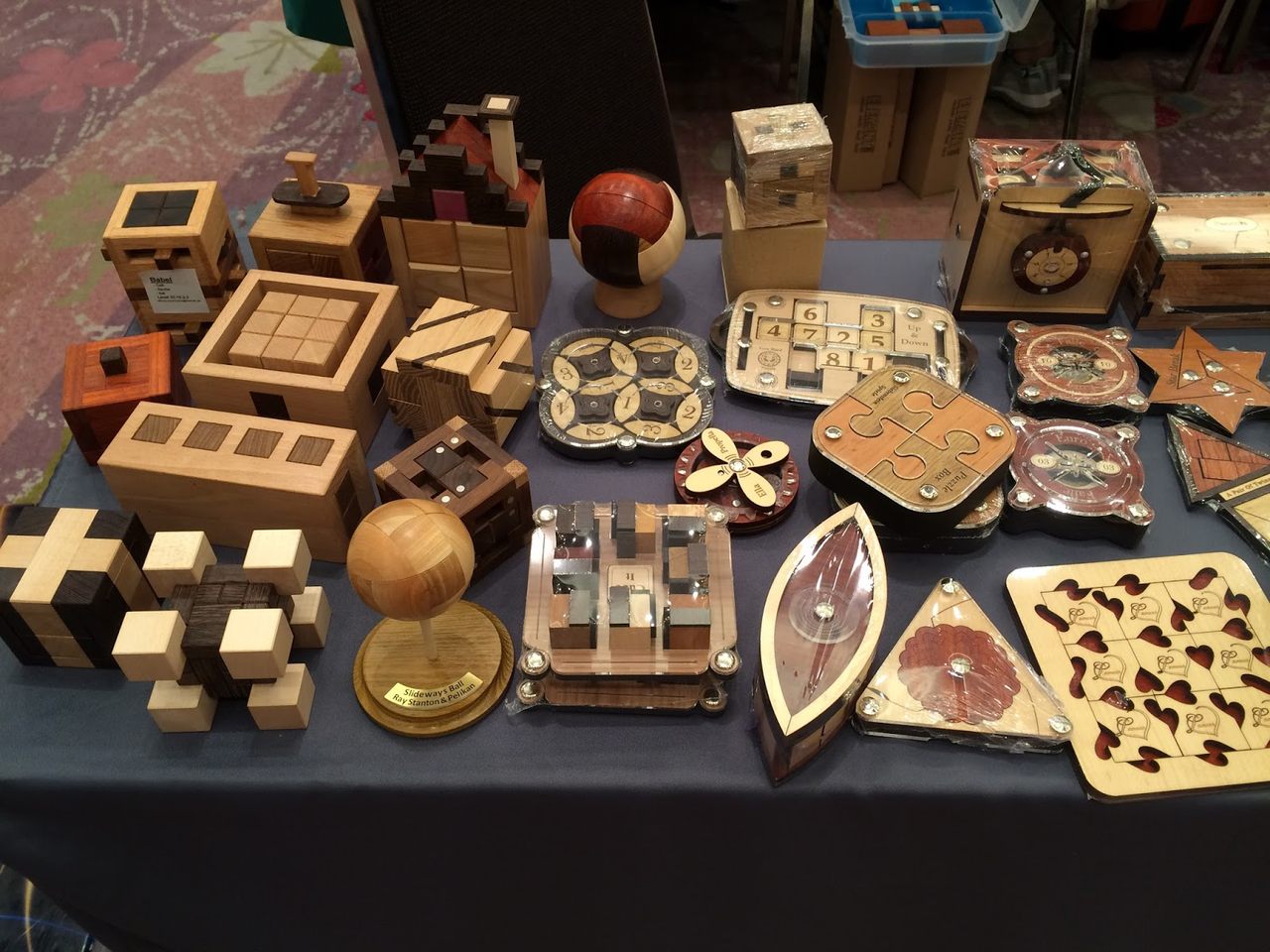 Every year, at a location disclosed only to invitees, there is a secret puzzle party.

Fans, craftspeople, and collectors gather to share the latest innovations and creations in the realm of mechanical enigmas. From tricky puzzle boxes to untouchable puzzles contained in glass bottles to misleadingly simple stacking games, the International Puzzle Party (IPP) is the place to find unique works by some of the world’s leading puzzle creators. If you can get an invite.

In the last century, a devoted collector culture has grown up around games like puzzle boxes, Rubik’s Cubes, and other mechanical enigmas. However it wasn’t until the advent of the IPP that this disparate fan group had a good way to get together and share their ideas. “Puzzle-solving, even though it feels and sounds like a singular experience, it really isn’t,” says Nick Baxter, captain of the U.S. Puzzle Team, and current director and organizer of the IPP. “It’s a virtual shared experience and people who like puzzles really enjoy sharing their experiences.”

The International Puzzle Party was first established back in 1978 by noted puzzle collector and scholar, Jerry Slocum, who hosted the first gathering in his living room for a hand-picked selection of collectors. After that first gathering of like-minded puzzle collectors, Slocum continued to host the event every year, and the attendance continued to grow as word-of-mouth spread throughout the puzzling community, enticing people from all over the world to come and trade their puzzles. “It already had an international flavor,” says Baxter. “It was in Los Angeles, and folks were coming from Japan, were coming from Europe.”

The IPP began being hosted by different people across the planet. The ninth IPP was the first to be held outside of the U.S., taking place in Tokyo, and each year since, the party has rotated between different locations in Europe, the U.S., and Japan.

Since its inception, the IPP has become somewhat of a rallying point among the puzzling community, helping to bolster and encourage collectors across the globe. “I was surprised that there are hundreds of people who are interested in the mechanical puzzle,” says JinHoo Ahn, a collector and designer whose three-piece symmetry puzzle, “Bitten Biscuits,” received honorable mention at this year’s IPP. “In my country, it’s hard to find a person who likes to collect puzzles. So it was a great experience to meet these people in IPP.”

“The IPP is very important to me,” says Gál Péter, a Hungarian collector whose puzzle, “Matchbox Playground,” was one of the top puzzles in the design competition at this year’s IPP. “It’s a thrill to meet so many people who all share the same interest, and yet have such different personalities.” While the event has become a beacon of puzzling camaraderie and togetherness, getting in takes a lot more than a handshake.

Baxter first began attending the IPP in 1993, and has been an integral part of the gathering each year since, taking over leadership of the event just four years later, when Slocum retired. In the years since he began overseeing the IPP, Baxter has maintained Slocum’s original vision of the gathering as a place by-and-for puzzle collectors, and has maintained a strict policy of only inviting members of the collector community, as well as the occasional special guest (including our own co-founder, Joshua Foer!). They tend to shy away from press, and don’t provide any public information about the IPP until after the fact. Even then, dispatches from the event are scarce, other than the results of the yearly design competition.

Baxter says that there are a few reasons for the IPP’s relative secrecy. “Part of it is a little bit, for lack of a better word, paranoia. From Jerry. From the early years,” he says. “Because there were some Chinese knock-off producers that tried to crash the party a couple of times, to basically get ideas.” Most of the attendees are puzzle makers and collectors only in their spare time, and ideally, are not attending the IPP as a commercial event, to have their designs bought or even stolen. Baxter stressed to us that the IPP is not a trade show. In fact, even people who make puzzles, but aren’t necessarily interested in the collecting aspect, are seen as suspect. “Anyone who is purely a designer that ends up being invited to the Puzzle Party has paid their dues in some sense,” says Baxter. “They are recognized as an integral part of the community.”

Another mitigating factor is capacity. IPPs taking place in the U.S. and Europe nowadays can see around 200 puzzlers in attendance. Those that take place in Japan see fewer attendees, just due to travel concerns, but they’ll still have well over a hundred collectors.

Gaining entry to one of the IPPs is sort of a puzzle unto itself, the solution to which is a lifestyle devoted to puzzle collecting. Those who do earn an invite get to experience a weekend of pure puzzlement.

As Baxter told us, the event usually takes place over the course of a few days, usually on a weekend. In addition to banquets, lectures, and tours of the local host city, there are two main components to the conference: the exchange and the party.

“The first interesting event is called the exchange, where everybody who signed up brings a copy of a puzzle they either designed or produced,” says Baxter. Participants bring puzzles and designs they have created, and everyone swaps with everyone else. So if you come with 72 copies of your original puzzle (“In Japan [2016] we had, I think, about 72 people.”), you will walk away with 72 different, new puzzles for your collection, and bewilderment. “It’s typical for what someone might bring to the exchange, [to be] something they designed, but they need someone else to produce it because they don’t have the skills. Or they’ve designed and produced it themselves, or it’s a collaboration of some sort. Or they’re none of the above,” says Baxter. Really the only rule is that you can’t bring a commercially available puzzle, lest someone already has it in their collection

The second main event is what’s known as the party, which usually takes place the day after the exchange. This is where the collectors get to set up tables and show off a fuller breadth of their collection and creations. “The party is basically somewhere between a swap meet and a trade show, where participants will have a table, and they’ll have puzzles for sale that they’ve made, or resell from someone else, or puzzles from their collection that they’re just trying to unload,” says Baxter. In the early days of the IPP, people mainly swapped puzzles amongst one another, but Baxter says, as the community grew, and people became more aware of the relative value of the items in their collections, it became a mainly cash operation.

After the party, to close out the IPP, the winners of the Nob Yoshigahara Design Competition (named after a famous Japanese puzzler) are announced. The winners are decided by a jury of puzzle collectors, including Baxter, who judge the entered puzzles by a number of criteria including design and ingenuity. Other awards are voted on by the attendees. All kinds of puzzles have won honors at the IPP, as trends in the puzzling community ebb and flow. “For the first couple years, it seemed as if high-functioning Japanese wood puzzles were the automatic trophy winners,” says Baxter. “One of the designers called it, ‘Big Wood.’ A euphemism for fancy wooden puzzles that got everybody excited.” He says that in recent years, “twisty puzzles” (think a Rubik’s Cube), have been popular thanks to advances in 3D printing among other things.

But when it comes to what wins awards at the IPP design competition, anything goes. Baxter told us of one winning “packing puzzle” that was just a single block that had to be placed in a box, but could only fit in one orientation thanks to magnets embedded in the piece. While it was a simple puzzle, its inventiveness could not be ignored. “That kind of ‘aha!’ whether it be in the solution or in the design, those seem to be awarded a bit more readily these days,” he says.

The winner of the 2016 Grand Jury Prize was a puzzle called “Marbles Cage,” by collector/designer Volker Latussek. This seemingly simple puzzle consisted of nothing more than a box with holes in it, and a collection of marbles that the puzzler needed to take out and put back in. But even for Latussek, who has been collecting puzzles for near 25 years, and attending IPPs since 1997, the event is all about the community. “It was always great to see the other guys in person, to discuss and joke with them,” he says.

After the IPP ends, entrants to the design contest are posted online, but talk of the event goes right back to the puzzling forums and password-protected IPP website, usually garnering almost no media attention. The 2016 IPP took place in early August in Kyoto, Japan. If the date and location for the 2017 IPP have been decided, only the puzzlers know.

The Mysterious Decapitation of Two Bison at a Spanish Reserve

How text-based games are changing way we tell stories.
nazis

The Nazi Board Games of World War II

These relics of wartime propaganda and anti-Semitism were designed for playtime.
games

When will the party end for online poker's refugees?
hidden

Finding Beyoncé is fun, but so are the minds of Pieter Bruegel the Elder and Hieronymous Bosch.
Video • Wonder From Home

13:46
Want to see fewer ads? Become a Member.
From Around the Web
THE GASTRO OBSCURA BOOK
Taste the World!
An eye-opening journey through the history, culture, and places of the culinary world. Order Now