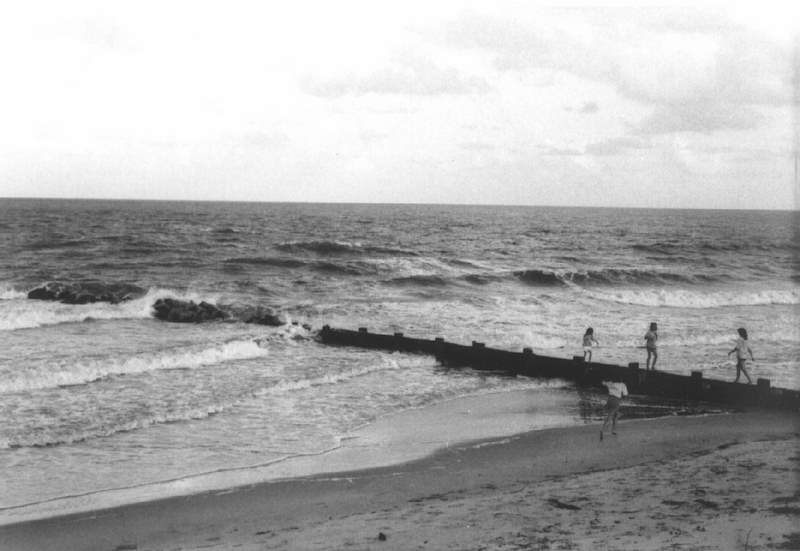 Pawleys Island, in gray. Hunter Desportes/CC BY 2.0
In This Story
Destination Guide

Hurricane Florence is dangerously raging over the Carolinas, with winds over 80 miles per hour, massive flooding, and millions expected to lose power. Official warnings and evacuation orders came throughout the week.

Over the last week, some South Carolinians were talking about a different, folkloric warning sign, a ghost known as the Gray Man, believed to appear in the small town of Pawleys Island as a harbinger of hurricanes. While there is disagreement surrounding details (common to many ghost stories)—like who the Gray Man is supposed to have been and when he first appeared—the tale’s basic contours are generally accepted. In sum, a man was returning to his beloved on Pawleys Island after a long time away, but died in quicksand before arriving. Since then, he has been said to appear shortly before hurricanes, as a signal that it’s time to leave the island. He is also believed to preserve the homes of those he meets.

In her book South Carolina Ghosts, folklorist Nancy Roberts imagines the Gray Man on a “mission” to notify a passerby of the impending storm: “It was a magnet drawing him toward the houses and out of them he would choose just one. To him, it was as if that house belonged to his sweetheart of long ago although in a dim sort of way, he really knew it did not.”

A look at Twitter shows that coastal South Carolinians are still very much aware of him. Lee Brockington, a historian at the Hobcaw Barony (a research and education site maintained by the Belle W. Baruch Foundation) in Georgetown, South Carolina, and coauthor of the book Pawleys Island, believes the story is well known because the barrier island attracts vacationers from other parts of South Carolina, who then share the story upon returning home. But she’s careful to note that the Gray Man story—with its discrepancies and differing versions—may say more about the nature of storytelling than about natural disasters.

Some tellings, for instance, trace the Gray Man’s first appearance to 1822, but Brockington first heard the story as emerging from a later context, with the figure as a Confederate soldier returning home from the war in 1865—alongside his former slave. Brockington wonders whether that later version became more popular during the 1960s due to the civil rights movement and the Civil War centennial. She finds it a useful way to illustrate, through oral storytelling, that slaves had also been taken to war and had their own loved ones waiting at home. Brockington also suspects that the myth became better known after Hurricane Hazel in 1954, which devastated Pawleys Island. The resort town was appearing in the news, and wanted to lure back curious tourists and their dollars.

“I believe in the power of the story,” she says. It serves as a kind of awareness-raising weather advisory, and also does the important work of linking today’s Pawleys Island vacationers with old racial and environmental histories. Hopefully Pawleys Island’s recovery from this storm will be swift.

Join us for a daily celebration of the world’s most wondrous, unexpected, even strange stories.
history

The Long Legacy of Ireland's 'Night of the Big Wind'

Before the Great Famine, the country experienced a storm that left a lasting mark.
ethnographic

Tropical Storms Were Once Named After Wives, Girlfriends, and Disliked Politicians

Want a storm named after you? Well, it's complicated.
haunted

A history of othering, experimentation, and mystery.
Video • PinDrop