For 40 Years, Crashing Trains Was One of America’s Favorite Pastimes - Atlas Obscura
Want to see fewer ads? Become a Member. 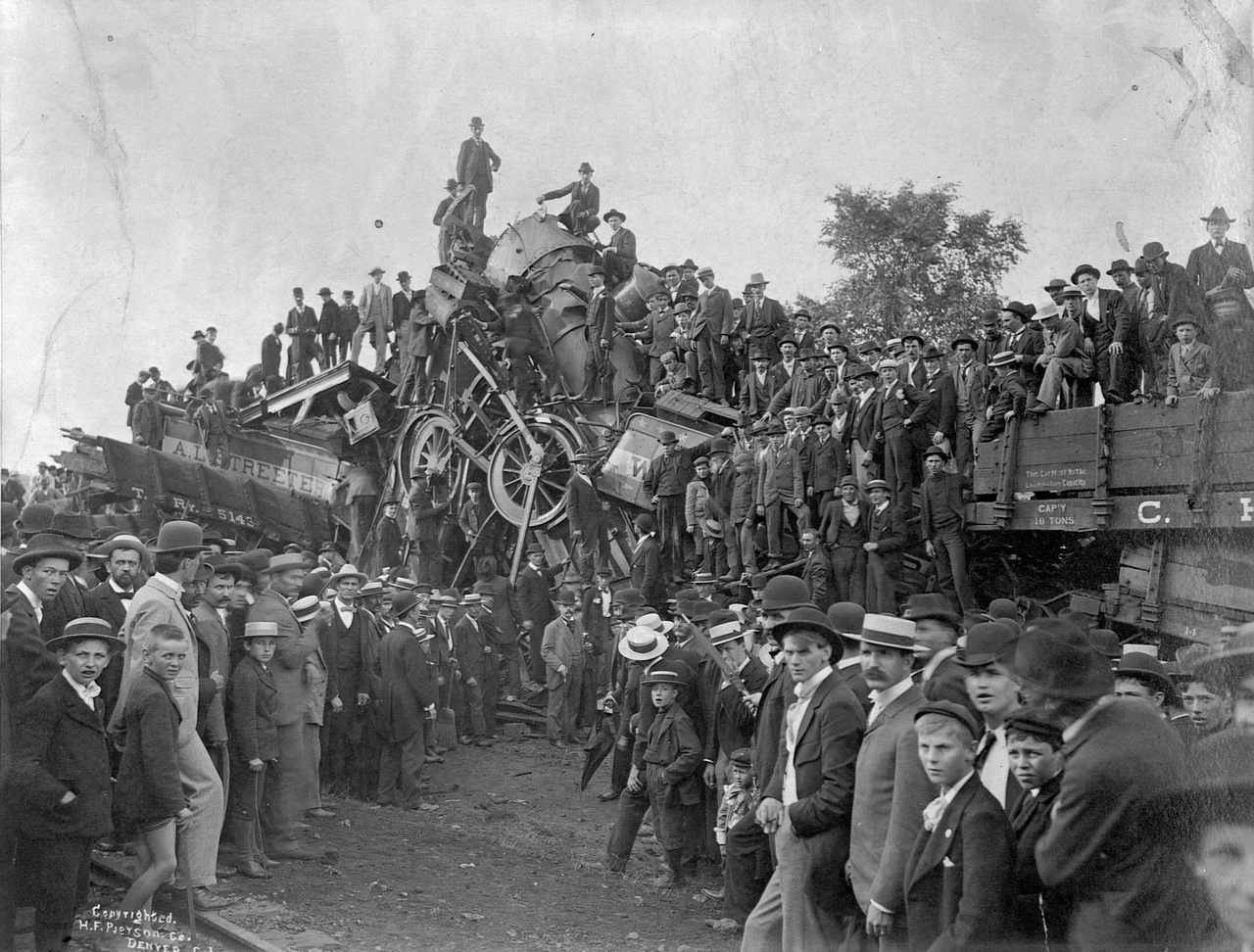 A crowd swarms over the wreckage to claim souvenirs in Buckeye Park in Ohio after a staged train wreck in 1896. H.F. Pierson/Library of Congress/Corbis/VCG via Getty Images
In This Story
Destination Guide

On September 15, 1896, two locomotives crashed head on 14 miles north of Waco, Texas. The locomotives’ boilers exploded on impact, sending debris flying through the air for hundreds of yards, killing at least two spectators and maiming countless others. One man even lost an eye to a flying bolt.

But no one ran from the calamity. In fact, after the crash, thousands of bystanders ran toward the destroyed locomotives hoping to claim a piece of the wreckage. That’s because the 40,000 or so people scattered along the tracks that September day knew the locomotives were going to crash and had paid to be there.

From 1896 until the 1930s, staged train wrecks were a popular—albeit destructive—event at fairs and festivals across the U.S., long before anyone ever thought of wrecking old automobiles at a demolition derby or monster truck rally.

One of the first staged train wrecks was done in 1895 by a railroad equipment salesman named A.L. Streeter in Ohio. The wreck used the same formula that nearly all other staged train wrecks would follow for the next 40 years. Organizers would lay a stretch of track, usually anywhere from 1,800 feet to a mile-long, and then get two old steam locomotives and put them at either end of the track facing each other. They would then hire two brave locomotive engineers to wait for a signal from the organizer. When they got the go-ahead, the engineers would pull the throttles back as far as they could to get the locomotives up to speed. They would then jump from the locomotive before the two trains crashed in front of a crowd who had paid a few dollars to see the spectacle.

According to the historian James J. Reisdorff’s book The Man Who Wrecked 146 Locomotives, Streeter’s wreck was so successful that there were at least six staged train collisions the following year, including the most infamous one north of Waco, Texas, known as the “Crash at Crush.”

The wreck near Waco was the brainchild of William George Crush, a passenger agent for the Missouri-Kansas-Texas Railroad, better known as the “Katy Railroad.” The Katy had been struggling to regain its financial footing following the Panic of 1893 and the appropriately named Crush was tasked with finding a way to attract new passengers to the railroad. Crush offered a deal where people could pay two dollars to ride the Katy to the wreck from anywhere in Texas.

Crush secured two old steam locomotives, Nos. 999 and 1001, and painted them red and green. Railroad employees then built a stretch of track between three hillsides that formed a natural amphitheater, perfect for viewing the wreck. Crush expected a crowd of 20,000 people to come to the event, so he built a temporary town and called it “Crush.” To support the thousands of spectators he drilled water wells, set up a borrowed circus tent to house a restaurant, and built a wooden jail in case people got out of hand. He even hired 200 constables to keep the peace.

On September 15, people began to arrive at Crush aboard trains that would steam into town every few minutes. By 4 p.m., more than 40,000 people had arrived, far more than Crush’s original estimate, making Crush the second-largest city in Texas, at least for a few hours.

At approximately 5:10 p.m., Crush climbed on his horse and rode to a spot between the two locomotives. At the wave of Crush’s hat, the two trains began to barrel toward each other. The locomotives reached 50 miles per hour before they collided, crunching into a mass of bent steel and shattered wood before exploding. One witness described the terror: “There was a swift instance of silence, and then, as if controlled by a single impulse, both boilers exploded simultaneously and the air was filled with flying missiles of iron and steel varying in size from a postage stamp to half a driving wheel.” A Civil War veteran who was there said it was more terrifying than the Battle of Gettysburg.

Prior to the event, Crush had asked a number of Katy engineers about the dangers of crashing two locomotives. All of them but one said it was safe. The engineer who said the locomotives would explode was quickly dismissed as a negative naysayer.

Crush was fired immediately after the crash, but after realizing that most people in attendance had a great time, the railroad rehired Crush the next day and he worked for the Katy until he retired.

While Crush was perhaps the most well-known train wrecker, one man turned it into a career. Joe Connolly staged more than 70 wrecks and destroyed at least 146 locomotives between 1896 and 1932. He even earned the nickname “Head-On Joe.”

Connolly grew up in Iowa along the tracks and as a boy often wondered what would happen if two trains ran into each other. “I believed that somewhere in the makeup of every normal person there lurks the suppressed desire to smash things up,” Connolly wrote in an article in 1933. “So I was convinced that thousands of others would be just as curious as I was to see what actually would take place when two speeding locomotives came together.”

Besides wanting to satisfy his boyhood wonder, Connolly worked in theater and knew a good show when he saw it. For his first collision, Reisdorff writes, he teamed up with a veteran locomotive engineer, J.H. Bancroft, in order to safely carry out the event. Connolly went to the state fair board in Des Moines and offered to put on a crash for $5,000. That initial price was a bit too steep for the board but he came back with a more acceptable offer: $3,000 plus a cut of the ticket sales. The board agreed and on September 9, 1896—a week before the infamous Crash at Crush—Connolly held his first staged wreck. About 5,000 people paid 50 cents each to sit in the grandstand to watch the show and thousands more stood along the fence outside. The wreck was a success and both Connolly and the fair made a profit.

Connolly began to criss-cross the country putting on wrecks from Boston to Los Angeles, Tampa to Salt Lake City. According to Reisdorff, he also found ways to add to the spectacle, including strapping dynamite to the front of the locomotives and filling freight cars behind the engines with gasoline and hot coals so the vehicles would be engulfed in flames after they derailed. Connolly and other train wreckers also liked to paint names and phrases on the sides of the trains for different political candidates or causes so that spectators could cheer for their respective locomotive. One wreck in 1932 featured “Hoover” versus “Roosevelt.” Connolly got so proficient at putting on train wrecks that he allegedly even tried copyrighting it, although Reisdorff was unable to find proof that he ever actually filed the paperwork to do so.

By the 1930s, staged train wrecks were starting to lose their popularity because wrecking old but otherwise useful locomotives was seen as wasteful at the height of the Great Depression. Connolly put on his final wreck at the Iowa State Fair in 1932. According to Reisdorff’s book, after the destructive display, Connolly said, “Well that’s that,” and walked away.

The last staged train wreck for public viewing was in 1935, but that was not the last time people crashed two locomotives on purpose. In 1951, two steam locomotives were wrecked in Colorado in front of the cameras for the movie Denver and Rio Grande, a western-themed film about the construction of the railroad of the same name.

Even today, train wrecks still offer grim appeal for the public. One only needs to look at the 2010 disaster movie Unstoppable to see an example of a modern audience waiting with bated breath for a train wreck. But the trend of destroying trains in front of a live audience is one that died out long ago, along with Connolly and Crush, the masters of the bizarre craft.

After restoring the monster locomotive, Ed Dickens is hitting the rails.
hoboes

Rail riders past and present leave messages for each other, but not the ones you’ve probably heard about.
railroads

Over the last 50 years, Amtrak has seen many designs come and go.
List