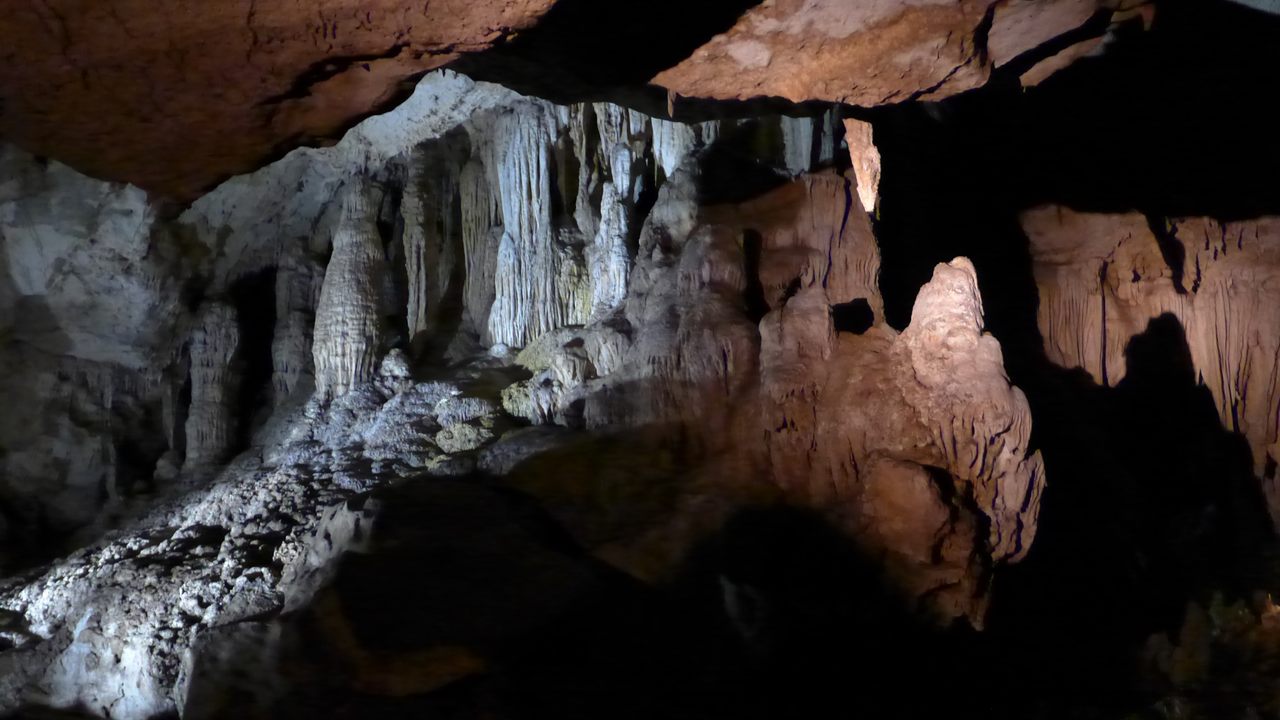 Mawmluh Cave in India preserves a millennium-old record of monsoon and drought. Gayatri Kathayat
In This Story
Destination Guide

In a remote cave in northeast India, rainwater has slowly dripped from the ceiling in the same spots for over 1,000 years. With each drop, minerals in the water accumulate on the floor below, slowly growing into calcium carbonate towers known as stalagmites. These stalagmites are more than geological wonders—like tree rings, their layers record the region’s rainfall history. They also carry a warning about the potential for catastrophic multiyear droughts in the future.

By analyzing the geochemistry of these stalagmites in a new study published this month in the Proceedings of the National Academy of Sciences, we were able to create the most precise chronology yet of the summer Indian monsoon over the past millennium. It documents how the Indian subcontinent frequently experienced long, severe droughts unlike any observed in the last 150 years of reliable monsoon rainfall measurements.

The drought periods we detected are in striking synchrony with historical accounts of droughts, famines, mass mortality events, and geopolitical changes in the region.

They show how the decline of the Mughal Empire and India’s textile industries in the 1780s and 1790s coincided with the most severe 30-year period of drought over the millennium. The depth and duration of the drought would have caused widespread crop failures and the level of famine discussed in written documents at the time.

Another long drought encompasses the 1630-1632 Deccan famine, one of the most devastating droughts in India’s history. Millions of people died as crops failed. Around the same time, the elaborate Mughal capital of Fatehpur Sikri was abandoned and the Guge Kingdom collapsed in western Tibet.

Our findings have important implications today for water planning in a warming world, particularly for India, which, with its vast monsoon-reliant agriculture industry, is on pace to soon be the most populous country on the planet.

Scientists began systematically measuring India’s monsoon rainfall with instruments around the 1870s. Since then, India has experienced about 27 regionally widespread droughts. Among them, only one—1985 to 1987—was a three-year consecutive drought or worse.

The apparent stability of the Indian monsoon in that data might lead one to surmise that neither protracted droughts lasting multiple years nor frequent droughts are intrinsic aspects of its variability. This seemingly reassuring view currently informs the region’s present-day water resource infrastructure.

However, the stalagmite evidence of prolonged, severe droughts over the past 1,000 years paints a different picture. It indicates that the short instrumental period does not capture the full range of Indian monsoon variability. It also raises questions about the region’s current water resources, sustainability, and mitigation policies that discount the possibility of protracted droughts in the future.

To reconstruct past variations in rainfall, we analyzed stalagmites from Mawmluh Cave, near the town of Cherrapunji in the state of Meghalaya—one of the wettest locations in the world.

Stalagmites are cone-like structures that grow slowly from the ground up, typically at a rate of about one millimeter every 10 years. Trapped within their growth layers are minute amounts of uranium and other elements that were acquired as rainwater infiltrated the rocks and soil above the cave. Over time, uranium trapped in stalagmites decays into thorium at a predictable pace, so we can figure out the age of each stalagmite growth layer by measuring the ratio of uranium to thorium.

The oxygen in rainwater molecules comes in two primary types of isotopes: heavy and light. As stalagmites grow, they lock into their structure the oxygen isotope ratios of the percolating rainwater that seeps into the cave. Subtle variations in this ratio can arise from a range of climatic conditions at the time the rainwater originally fell.

Our previous research in this area showed that variations in oxygen isotope ratios in rainwater, and consequently, in stalagmites, track changes in the relative abundance of different moisture sources that contribute to summer monsoon rainfall.

During years when monsoon circulation is weak, rainfall here is primarily derived from the moisture that evaporated from the nearby Arabian Sea. During strong monsoon years, however, atmospheric circulation brings copious amounts of moisture to this area all the way from the southern Indian Ocean.

The two moisture sources have quite different oxygen isotope signatures, and this ratio is faithfully preserved in the stalagmites. We can use this clue to learn about the overall strength of the monsoon intensity at the time the stalagmite formed. We pieced together the monsoon rainfall history by extracting minute amounts of calcium carbonate from its growth rings and then measuring the oxygen isotope ratios. To anchor our climate record to precise calendar years, we measured the uranium and thorium ratio.

The paleoclimate records can usually tell what, where and when something happened. But often, they alone cannot answer why or how something happened. Our new study shows that protracted droughts frequently occurred during the past millennia, but we do not have a good understanding of why the monsoon failed in those years. Similar studies using Himalayan ice cores, tree rings, and other caves have also detected protracted droughts but face the same challenge.

In the next phase of our study, we are teaming up with climate modelers to conduct coordinated proxy-modeling studies that we hope will offer more insight into the climate dynamics that triggered and sustained such extended periods of drought during the past millennium.

Gayatri Kathayat is an associate professor of global environmental change at Xi’an Jiaotong University. Her coauthor Ashish Sinha is a professor of earth and climate sciences at California State University Dominguez Hills

The Scotty Creek facility was part of an unprecedented First Nations effort to study and save the Arctic. Then the fire came.
caves

Scores of ancient paintings and other works will soon succumb to the sea—but a passionate team is determined to preserve this 'bubble of memory.'
subterranean

Thought for decades to be extinct, the tiny animal has stayed hidden in a former subterranean speakeasy.
sinkhole

Receding waters are leaving behind an environmental disaster, and a new kind of tourism.
Video • PinDrop

3:07
Want to see fewer ads? Become a Member.
From Around the Web
Atlas Obscura Trips
India: Desert Festivals of Rajasthan
View This Trip
Thanks for sharing!