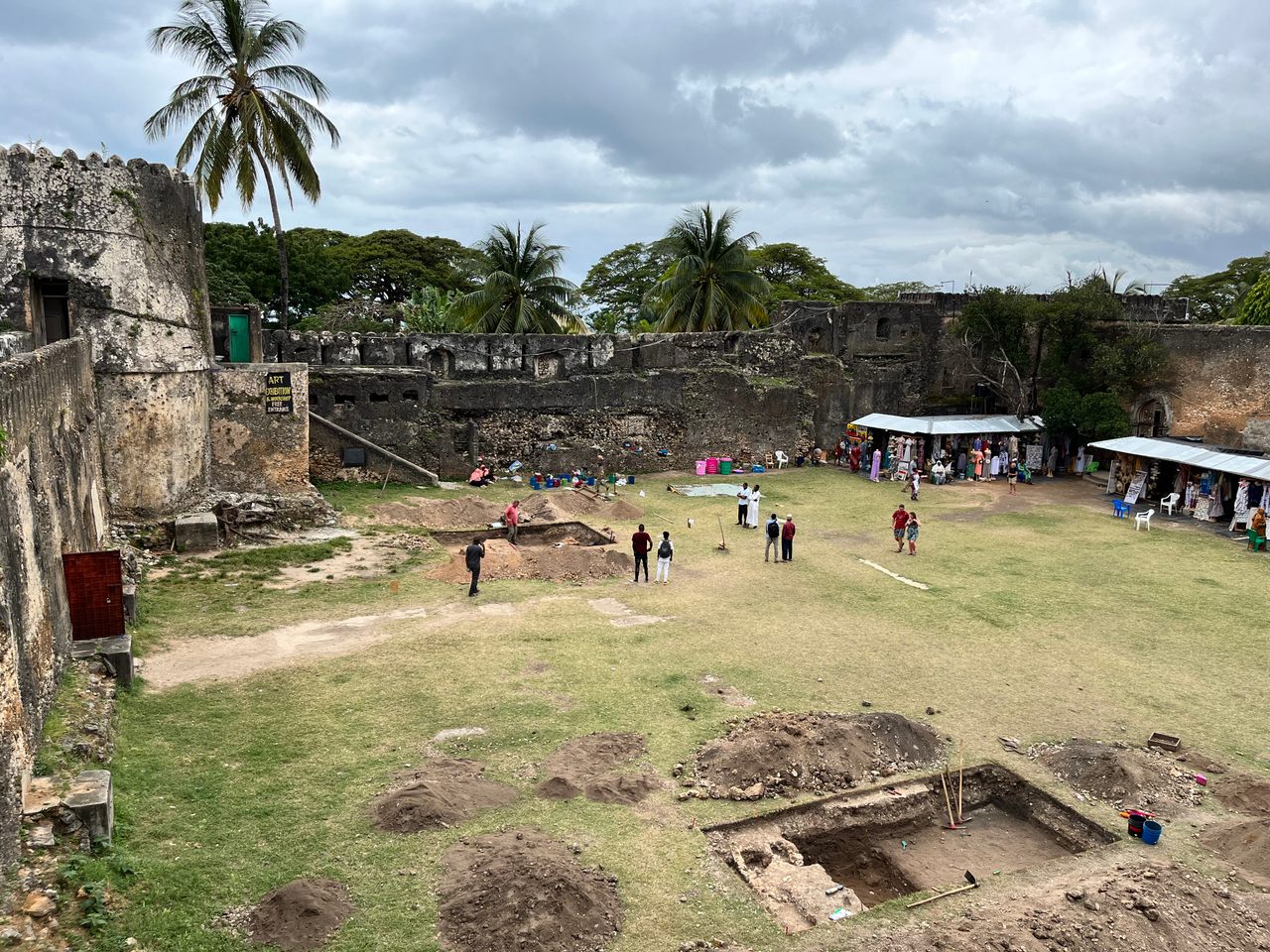 Archaeological trenches inside the Old Fort of Stone Town in Zanzibar City reveal a new, longer history of the settlement. Courtesy of Tim Power
In This Story
Destination Guide

Historians have long thought that Stone Town, the oldest part of Zanzibar City on the island of Zanzibar, was nothing but a fishing village before the Portuguese arrived at the end of the 14th century. The accepted story was that the Portuguese founded and grew the city for two centuries before the Sultan of Oman took over near the end of the 17th century. The Omani have been credited with turning Stone Town into a flourishing Indian Ocean trading center, and Stone Town gets its name from the ornate homes built with local stones by Arab traders and enslaved East Africans.

But a recent archeological project has begun to tell us an entirely different story, one that places local Swahili people back into the narrative. A United Arab Emirates-led excavation has unearthed new evidence that could prove that Stone Town was established as a trading port by the Swahili centuries before the arrival of the Portuguese.

This surprising new history emerged recently from a project that started in 2017. Mark Horton of the Royal Agricultural University in the United Kingdom and Tim Power of the United Arab Emirates University began excavation work at the Old Fort, also known as the Arab Fort, initially hoping to learn more about the site’s Omani origins. The Old Fort was built in 1699 and has long been known as the oldest building in Stone Town. During the dig, the archeologists discovered the remains of an old Portuguese church and a Christian burial ground dating back to the 16th century.

But as they turned their attention toward the church, the COVID-19 pandemic hit and the project was shut down. It wasn’t until the summer of 2022 that the researchers were able to return to Stone Town. Once they began digging again, Horton and Power realized that they had found far more than a 16th century religious site. “We were really excited to discover that there was a whole Swahili town underneath the surface that goes back before the Portuguese,” Power explains.

In collaboration with three international universities, the government of Zanzibar, and a team of 20 that include students from the State University of Zanzibar and archeologists from Abu Dhabi’s Department of Culture and Tourism, the project turned its focus to understanding the full scope of this previously unknown Swahili establishment.

Horton, who began working in Zanzibar in the 1980s and whose interests lie in understanding Zanzibar as a key player in the Indian Ocean trade, says that archeological sites on Zanzibar founded in the 8th century, like Unguja Ukuu—a historic Swahili settlement that is one of the earliest trading posts on the eastern coast—have provided early evidence of the development of Zanzibar. However, Horton says, “places like Unguja Ukuu came to an end in the 10th or early 11th centuries.”

The question is, what happened in the time period before the arrival of the Portuguese and Omani Arabs? The Old Fort excavation found remnants of the thick stone walls of homes, cooking pits, and broken Persian and Chinese pottery dating back to the 11th century. These, Horton explains, could begin to provide meaningful answers.

Power says that not only do these artifacts emphasize the presence and establishment of the local Swahili people but it also demonstrates that the origins of Stone Town and the Swahili community there may also lay in early trading between the locals and merchants from Persia, the region that is now known as Iran, in the 10th century. “There are stories about these merchants from Shiraz, a major city in southern Iran, in the 10th and 11th centuries, who came down to East Africa and established little trading centers and married into the local communities,” he says. “These are stories that echoed through the ages, and are very important to the modern Swahili community.” In other words, these stories and legends mostly known amongst the locals are turning out to be critical to understanding the history of Stone Town.

These new discoveries allow archeologists to bring forth a narrative of Zanzibari history that many don’t know about. Horton and Power say that because a majority of the reference work was written by the British during the colonial period, the history is most often told through the lens of imperialism and colonialism. “For instance, they’ll write the history of Britain as part of the history of the Roman Empire and they’ll look to Zanzibar as part of the Omani Empire,” Power explains. In other words, the British viewed the Omani period as a predecessor for—and perhaps, a justification for—the ongoing project of colonialism.

“It’s quite nice with archeology to be able to say, ‘Hang on a minute. There’s this indigenous population that has been living here building stone buildings for a good 800 years before the Omanis turned up,’” Power says.

Hint: There is a laser involved.
history

Saving the Ancient Glass Artifacts Shattered in the Beirut Explosion

These centuries-old vessels now have new stories to tell.
museums

The remnants of Borgund were buried in the dirt for centuries and then sat in museum storage for decades.
mystery