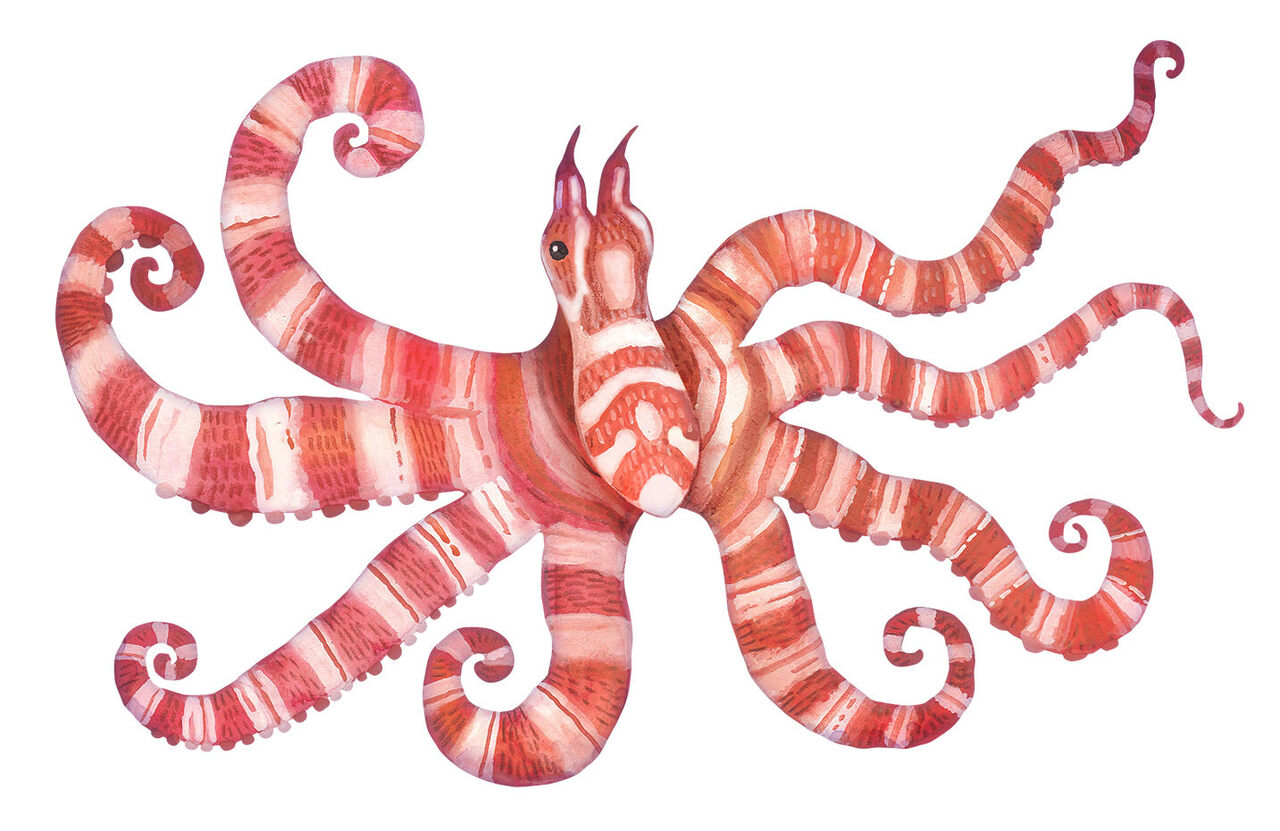 In the shallow tropical waters of Indonesia and the Philippines lives a species of octopus with reddish skin, beautifully marked with brilliant white stripes and spots. Each individual has a unique pattern, like a snowflake. A darling of divers and underwater photographers, the cephalopod with the dramatic looks has an equally dramatic scientific name: Wunderpus photogenicus.

This and other critters with amusing-sounding monikers, both scientific and common, are the subject of a new, fancifully illustrated children’s book Encyclopedia of Strangely Named Animals, Volume One. Authors Fredrik Colting and Melissa Medina say they were fascinated by “how each animal has a specialized feature or habit that carries through in their names.”

But putting these official labels on the natural world isn’t always quite as much fun. “People give all sorts of whimsical names to animals, but remember that there is the common name—American robin— and the scientific name—Turdus migratorius,” says Brian Brown, curator of entomology at the Natural History Museum of Los Angeles County. All scientific names must be in Latin and follow a general set of rules for a new species. Scientists get to name the species they identify, but each name needs to be unique, so sometimes the novelty wears off.

“Choosing names is fun in small doses, but when you have 100 new species of Apocephalus [a genus of ant-hunting flies] to describe, it starts becoming a chore,” says Brown. “Eventually, you just try to think of something to attach to that species concept.”

That means, for example, giving a species name that references a defining feature, a place, maybe a person—or sometimes a pun or something more whimsical. “Within the taxonomic process, there is some latitude for humor,” Brown adds, “like Terry Erwin’s beetles of the genus Agra … he called one Agra vation, for example.” Entomologist Erwin has an entry in Strangely Named Animals as well: an elegant canopy beetle he dubbed Agra cadabra.

The book also finds the joy and humor of less official but more widely used common names: the tasselled wobbegong (a near-threatened species of shark in northern Australia with masterful camouflage skills), or the pink fairy armadillo (the small, Argentinian species with big claws and a fair complexion), or the sparklemuffin (a colorful and hairy spider with a leg-shaking mating dance, also from Australia). Brown says scientists don’t usually bother to propose common names, except for extremely popular animals. “I have never given a fly a common name, for instance,” he says, “even though I have described more than 500 of them.”

Choosing animals with amusing common or scientific names for their children’s book, the writers also, not accidentally, put together a menagerie reflecting the weird and wonderful in nature. From the gaping maw of the Californian sarcastic fringehead to the delicate colors of the moustached puffbird from Colombia and Venezuela, the creatures in this whimsical zoo are charmingly rendered by artist Vlad Stankovic.

Atlas Obscura has a selection of images from the Encyclopedia of Strangely Named Animals, Volume One.

We asked Ivvet Modinou about the underwater creature that shares her name: P. modinouae.
art

Raku Inoue is now finding inspiration for his precise, ephemeral works in his backyard.
paintings

Is your imagination as wondrous as reality?
art

"Nature is there for you, especially when you need it."
Video