To Study Pesky Aphids, Scientists Suck Them From the Sky - Atlas Obscura
Want to see fewer ads? Become a Member. 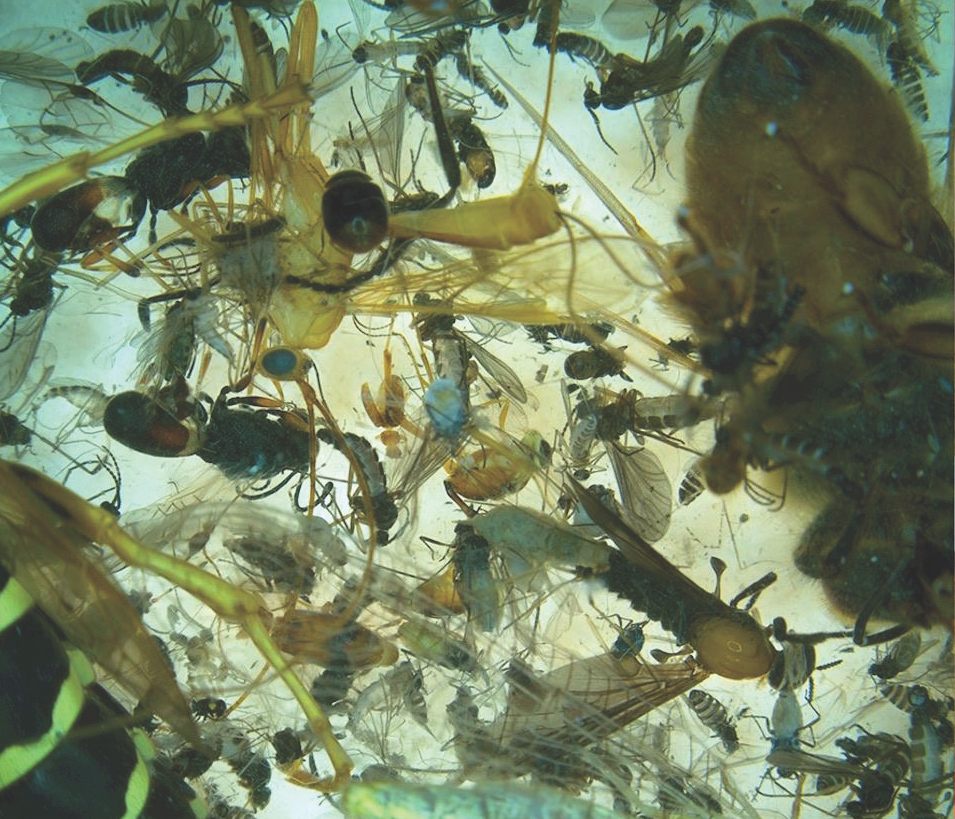 Tall, white towers rise like smokestacks in Crookston, Minnesota; Manhattan, Kansas; and Monroe, Michigan. Around 19 feet high and secured to the ground with cables and wooden posts, they’re essentially giant vacuums, sucking up some of the creatures passing through the nearby sky. Come May, around 35 of these strange structures will be active, jutting up near woods, cornfields, and squat, leafy rows of soybeans, mainly around university-backed agricultural research stations.

The vacuums capture all sorts of small critters—they’re capped with screens, to prevent birds and bats from toppling in, but wind up snaring mosquitoes and other insects, as well as the occasional spider. But the reason for their existence is a pesky pest known as the soybean aphid, Aphis glycines. Together, the gulping towers make up the soybean aphid Suction Trap Network.

As long as they fly under the radar, soybean aphids have a pretty good life. In their winged form, they soar above a buffet of farmland. “They basically suck the juices out of the soybean plant,” says Glen Hartman, a research plant pathologist at the Urbana, Illinois, office of the U.S. Department of Agriculture’s Agricultural Research Service. Hungry and as small as a pinhead, the aphids cause plants to dry out, mature faster, or die young, and they’re also known to transmit viruses to plants. Soybean aphids can cluster by the thousands on a single plant—think of a bagel heaped with yellowish-green sesame seeds. That’s frustrating for farmers, who can see declines in their yields.

Soybean aphids probably arrived in the U.S. from East Asia around the turn of the 21st century, possibly as stowaways on ornamental plants or edamame pods. At first, scientists and farmers in America “didn’t really have a lot of information about how serious they were,” Hartman says. “They really kind of blew up in our face.”

First observed on a farm near Whitewater, Wisconsin, in July 2000, soybean aphids quickly spread throughout the Midwest and into Ontario, Canada. In August 2001, so many of them descended on a Toronto Blue Jays baseball game that the umpire demanded that the stadium roof be closed against the onslaught. Across the soy-speckled region, the insects flourished. They also encountered ample buckthorn (Rhamnus cathartica), bushes where they can hunker down for the winter. Within four years, they had been observed in 22 states and three Canadian provinces.

When the species first arrived, it spread so quickly that predator populations took time to catch up, Hartman says—“they hadn’t realized there was that much food.” But in June 2019, entomologists at the University of Manitoba reported that aphid populations are constrained by hover flies and a few other species that move between neighboring soybeans and alfalfa plants. To thwart them, farmers have applied insecticides (which can also inadvertently kill other, beneficial insects), and researchers have bred resistant populations of soybeans.

Given the damage these aphids can do, scientists were keen to track their locations and migrations over time. In a paper forthcoming in the journal American Entomologist, a team of 15 collaborators, including Hartman, describes the network of vacuums that inhale the insects and save them for scientists to study.

The soybean aphid Suction Trap Network, founded in 2001, took a cue from a similar project in the U.K., which has been tracking aphid migrations since 1964. (There are currently 16 operational traps in the U.K. network, according to the American Entomologist paper). There was a predecessor in the U.S., too: From 1983 to 2003, a network of traps tracked the Russian wheat aphid across California, Idaho, Oregon, Washington, and Wyoming.

The soybean aphid traps suck the sky daily from 7:00 a.m. to 8:00 p.m., from the third week in May to the third week in October. (They’re set on a timer, so no one has to run out and turn them on or off.) They’re powered by fans and breathe in 60 cubic meters of air per minute, which is enough to fill more than 15,000 one-gallon jugs. “If you think of sucking on a straw and bringing up liquid, it’s kind of the same thing if you suck on the air,” Hartman says.

An aphid unfortunate enough to cross a trap’s path is sucked down into it and through a funnel. At the bottom, it lands in a solution that’s part water, part antifreeze. This liquid preserves the insects without creating a shipping hazard, and each week, collaborators collect and replace it, sending the aphid-studded batch to the USDA Soybean Diseases and Pests Laboratory at the University of Illinois. Back in the lab, researchers sort and store the aphids in ethanol at -4 degrees Fahrenheit, so they’re available for future study.

Each batch is a snapshot of the life passing by. “We call it a DNA soup,” says Hartman. “People do these soil biome studies where they study the soil DNA. This is just a sample that’s in the air.”

By studying the life languishing in the liquid, the researchers found that aphid populations tend to peak in late July and mid-August, when they’re flitting between soybean plants, and then again in the last two weeks of September, when they’re decamping for the buckthorn. Of the states the researchers studied, Illinois, Indiana, and Wisconsin were especially infested; Kansas, Kentucky, Missouri, and South Dakota much less so. Between 2005 and 2018, the researchers counted 176 species of aphids—more than 904,000 individual insects in all.

The ideal location for a vacuum trap is a spot that’s fairly out in the open, but still close enough to a building that the fan has a power source. “We also can’t have them in the middle of a field, because it would be an obstruction to the farmer,” Hartman says. Enclosed in the bottom of the tube, the whirring motor isn’t loud enough to bother people, says Doris Lagos-Kutz, a research associate in the soybean/maize germplasm, pathology, and genetics research program at the USDA Agricultural Research Service lab in Urbana, and lead author of the American Entomologist paper—but stand close by, and you might hear the whooshing.

Other than the weekly liquid exchange, the traps are pretty low-maintenance. The motors give out every few years, and sometimes the bird-deterring spikes blow over, but the towers are generally sturdy, unless they’re toppled by a storm or shaken by a distracted farmer. (Someone once snagged a tractor on the wires, Lagos-Kutz says.)

The network expanded in 2005, and has been sucking away for years. It only has two more years of planned funding, Hartman says. They operate with grant money, and when that runs out, “we’re not sure where the funding will come from,” he says. The collaborators hope they can keep vacuuming up aphids for years to come. “It’s really important to have these long-term studies,” Hartman says. “If we just took a window of a year or two, that wouldn’t tell us much about how populations change.”

The aphid samples come in handy when researchers want to test new targeted insecticides, says Lagos-Kutz. Future work could also reveal, for instance, how aphids affect emerging Midwestern crops, such as hemp, Hartman says, and open a window into how insect viruses ripple through populations. There’s also the big question about how aphids will fare in a changing climate. A few years isn’t long enough to track those thorny issues. “We need to measure in decades,” Hartman says.

A revolution in food-growing, home-building, and seed-saving is afoot outside Chiang Mai.
science

Farmers and foragers set up at sunset to sell hundreds of species valued in traditional medicine and ritual.
farms

You don't save agricultural traditions without swapping some seeds.
film locations