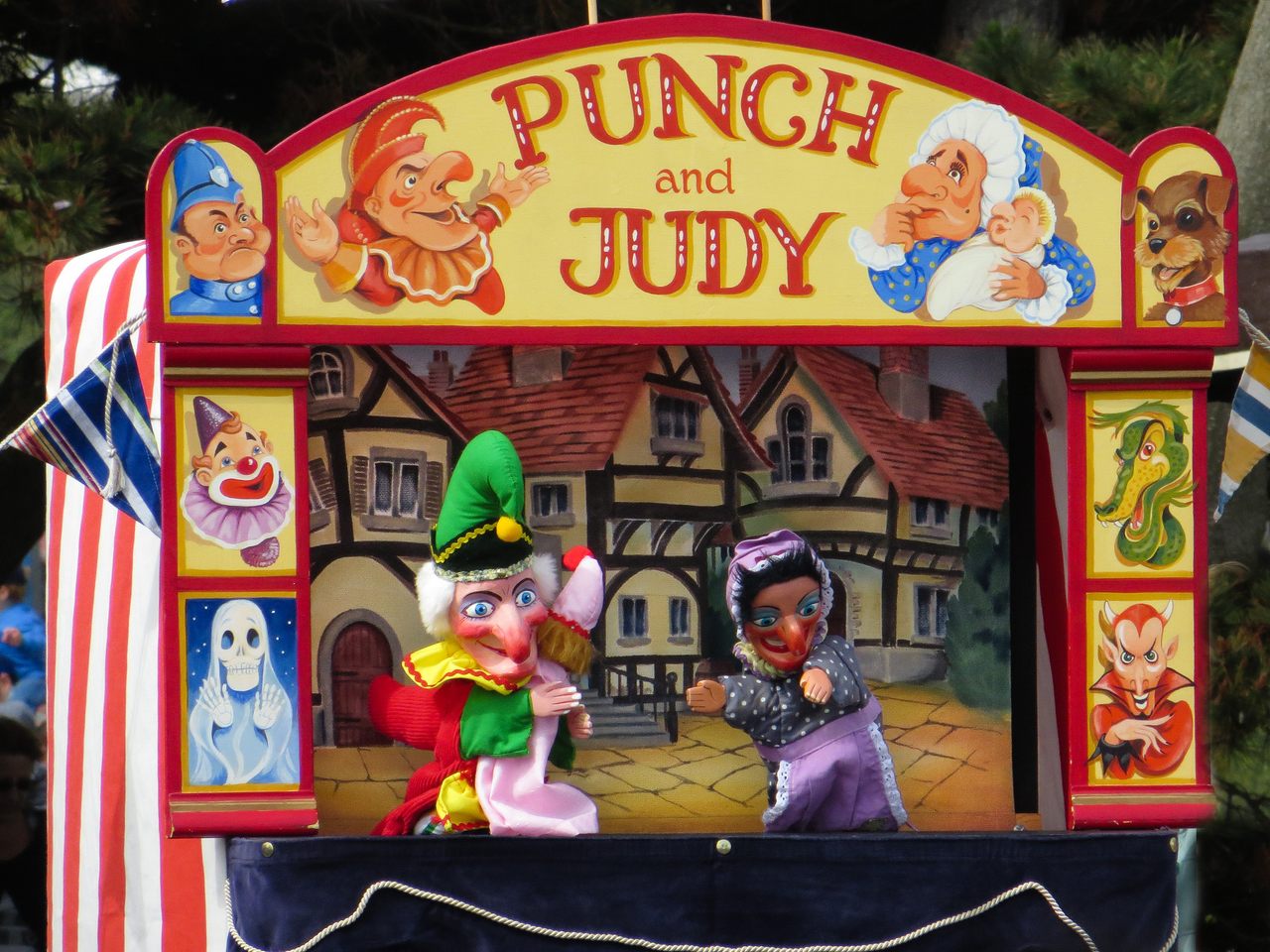 Can you hear the hunting horn cry of the Lord of Misrule? Charles D P Miller/CC BY 2.0

Long before there were Muppets or Triumph the Insult Comic Dog, there was Punch and Judy. The traditional puppet show has been around since at least the 17th century, and even today, specialist puppeteers known as “professors” keep it alive. In their efforts, they are aided by a simple, hidden tool of the trade, called a swazzle.

Also called a swatchel in the English tradition, a swazzle is sort of like a miniature kazoo that is held in your mouth. The name is thought to derive from the German word “schwätzen,” which means “to chatter.” Typically, a swazzle is constructed of a reed held between two strips of metal, though sometimes other materials are used. The swazzle is placed between the tongue and the roof of the mouth, and when a professor blows, or “talks” through it, the reed vibrates to create Mr. Punch’s high-pitched, buzzing voice.

One aspect of the Punch and Judy show that has helped it survive for centuries and spread all across the globe is that it is generally wordless, with the story and comedy deriving mostly from the violent pantomime of the puppets. Still, Mr. Punch often makes unintelligible but emotive squawks and chirps, and this is where the swazzle comes in. In a history of the swazzle by the performer Professor Glyn Edwards, he writes that “Meaningful dramatic dialogue between [Mr. Punch] and the other puppets can never take place. He is an elemental spirit of anarchic mischief – and his swazzled voice alone tells us as much.”

Originally evolving out of Italy’s commedia dell’arte tradition, today Punch and Judy can be found in various forms all over the world, from Brazil to Russia. No matter where or when it is performed, the comic show centers on the two titular puppet characters, Mr. Punch and his long-suffering wife, Judy. Additional characters have been introduced and made a part of the proceedings over the years, including their baby, a biting crocodile, and the devil, just to name a few. But Mr. Punch is central to any performance.

“Mr. Punch is an immortal archetype: a Lord of Misrule. He embodies a spirit of anarchic mischief that resonates down the ages,” says Edwards, a second-generation puppeteer who’s written multiple books on the Punch and Judy tradition.

The show’s storyline has changed with the times, updating and adding new routines depending on the location and era. But generally speaking, the plot involves Mr. Punch getting into any number of mischievous situations. Some common storylines include Mr. Punch bungling his parenting responsibilities, or running afoul of some inept police officer. Most stories end with Mr. Punch’s adversary getting beaten with a stick, to the delight of the audience.

How and when the swazzle used for Mr. Punch’s voice was first created is unknown, although Edwards thinks that it could predate Punch and Judy shows altogether. “The device, like ventriloquism, dates back into antiquity,” he says.

Learning to use the swazzle takes practice, and lots of it. There’s a common joke among Punch and Judy masters that you can’t consider yourself a full professor until you’ve swallowed at least two swazzles. “Once you can master the basics there are a few hints and tips on how to improve, but ‘learning to swazzle’ is like ‘learning to juggle,’” says Edwards. “You have some equipment to use and it’s up to you to get it to work. You’ll get advice and help from those who can already do it, but they can’t do it for you.”

Edwards estimates that today there are probably around 300 people worldwide who consider themselves Punch and Judy professors, keeping Mr. Punch’s antics alive. And thanks to their swazzles, the “hunting horn cry of the Lord of Misrule” will continue to cry out well into the future.

“The swazzle is so central to Punch and Judy,” Edwards writes, “that even its limitations are important because they prevent the show from straying too far from its roots.”

A Visit to One of America's Longest-Running Puppetry Theaters

The Bob Baker Marionette Theater has been serving up laughs and ice cream since 1963.
31 days of halloween

Every Halloween, an Oakland Man Stages Spooky Marionette Shows in His Driveway

Larry Schmidt has been offering the free performances at his California home for over a decade.
Video