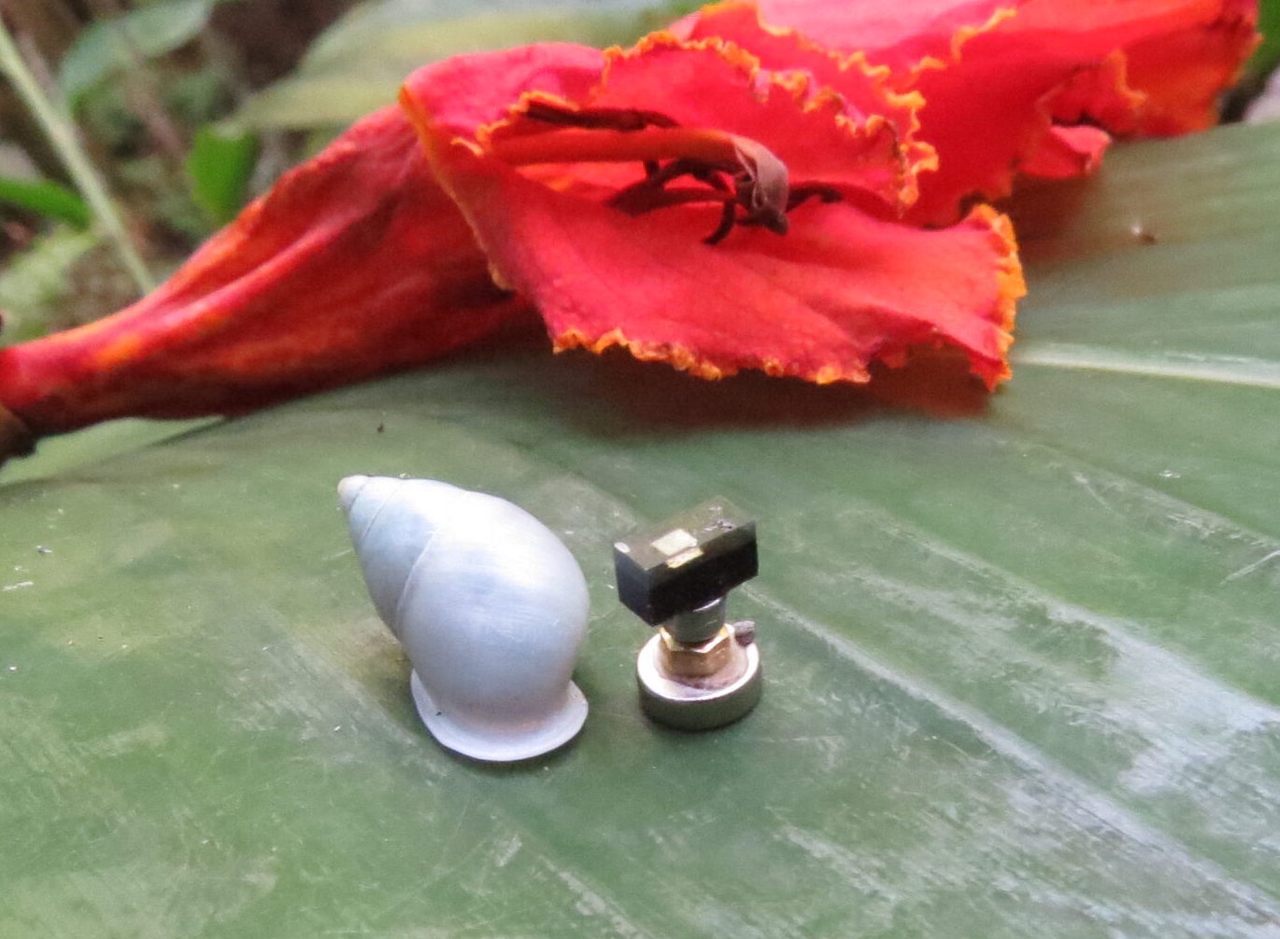 The gleaming white Tahitian tree snail Partula hyalina rests on a leaf beside one of the world's smallest computers. Courtesy Inhee Lee
In This Story
Destination Guide

Cindy Bick is on a mission. The University of Michigan evolutionary biologist scans her surroundings as she treks through the forested valleys on the north side of Tahiti. Most visitors come to this South Pacific island to enjoy its beaches and clear water, but Bick is here for another reason. She spots her quarry: a bean-sized dot of white on a sunlit leaf. It’s Partula hyalina, a small snail with a big story about risk and resilience in island species. With the aid of miniature computers about the size of a grain of rice, researchers are beginning to understand how this one species survived where so many of its relatives perished.

Over the past few centuries, and particularly since the 1980s, hundreds of species of Pacific Island land snails have gone extinct; they account for a staggering 40 percent of all documented animal extinctions. Like other flora and fauna that evolved on islands, isolated from the outside world for tens of millions of years, these species have had few defenses against the multitude of invasive species introduced—intentionally and otherwise—by humans. Often, attempts to control invasive species by introducing another invasive species only created a bigger mess.

“What I can say about this family in terms of their conservation status is, it is extremely grim,” says Brenden Holland, a conservation biologist at Hawaiʻi Pacific University who studies land snails, a group that includes tree snails like P. hyalina. “These lineages are just poorly adapted to cope with invasive predators, and that tends to be the main threat. And so, we’ve seen really extraordinary levels of extinction in the last four decades or so.”

But as its cousins blinked out of existence one by one, P. hyalina, currently listed as vulnerable, is hanging on. It hasn’t been easy. On Tahiti, a formidable predator hunts them: the invasive rosy wolf snail, Euglandina rosea, also known as the cannibal snail. These snails can grow up to four inches long and are capable of impressive bursts of speed, moving up to ten times faster than the species they hunt.* The rosy wolf snail is armed with an especially fearsome radula (a tongue-like appendage lined with teeth) that it can extend, Alien-style, beyond its mouth. The teeth themselves are elongated to more effectively scrape away flesh. “It can devour [another snail] whole, or it will take some time just rasping away at the soft body tissue of the snail,” says Bick. “It’s a pretty brutal way to go.”

The rosy wolf snail, native to the southern United States, was introduced in Tahiti, Hawaiʻi, and many other Pacific islands to control another invasive species, the giant African snail. The African giant can grow up to eight inches long, and had been brought to the region intentionally—it arrived in Tahiti in 1967—as a potential food source. “It grows fast and people thought, at one time, that it would be a really useful protein source,” says Holland. “It turns out it is chock-full of pathogens and parasites. And so, people started eating them and started getting sick and then people stopped eating them and [the snails] got out and started eating their way through everything.”

The rosy wolf snail was introduced in the 1970s with the hope that it would eat the African snails. Unfortunately, the predator likes to eat a lot of other snail species as well. In Hawaiʻi, for example, Holland’s research has shown that wolf snails actually prefer to hunt native snails rather than the African species.

Bick and her colleagues wanted to find out just how P. hyalina managed to survive this voracious predator. They reasoned that P. hyalina’s bright white shell might help it survive higher amounts of sun exposure than the darker-colored rosy wolf snail. Habitats with more sunlight than the floor of the dense forest, such as transition zones where trees gave way to open areas, might serve as what the team called “solar refuges.” While P. hyalina would be able to tolerate hours of bright sunlight, rosy wolf snails would risk overheating, and thus avoid the areas.

To test this hypothesis, the scientists decided to measure how much light the different snail species received over the course of a day. Early each morning for several days, Bick and her colleagues headed out, looking for snails.

When they found a rosy wolf snail, the researchers would glue a tiny computer to its shell. This was the first field application of the Michigan Micro Mote (M3), announced as the world’s smallest computer in 2014. (University of Michigan engineers have since developed an even tinier computer.)

Researchers then had the challenging task of keeping tabs on the snails for the rest of the day as the computers measured how much sun exposure the animals received. “If you look away from them for five seconds and look back, you could lose them because they have the advantage,” Bick says of the brownish, relatively speedy wolf snails. “They blend in very well with the leaves and forest floor.”

P. hyalina snails don’t move around as much during the day, but tracking them presented a different challenge. Researchers weren’t allowed to glue anything directly to the snails because they are a protected species, so they attached the computers to the leaf the snail was resting on.

Ultimately, the researchers’ hypothesis was confirmed through this novel field test. According to their paper, published in June in Communications Biology, P. hyalina received substantially more sun exposure than the wolf snails, suggesting solar refuges may have saved P. hyalina from extinction at the hands—or rather, mouths—of its fearsome predator.

“This generation of biologists and ecologists are looking for new answers. And that’s why this paper was so interesting to me,” says Holland, who was not involved in the study.

Bick believes the paper demonstrates why humans need to protect forest edge habitats and the solar refuges that give P. hyalina a fighting chance, unlike many other island species.

“This, I would say, is a pretty inspiring story,” says Bick. “Most of the time we talk about things that are extinct or about to go extinct. But we never talk about the success stories.”

She sees P. hyalina’s story of resilience as a small piece of solving a larger puzzle: “Given climate change, globalization, ever increasing deforestation,” says Bick, “What does it take to survive in this ever-changing environment, this ever-changing world?”

* Correction: An earlier version of this story reported that rosy wolf snails are capable of speeds of up to 19 mph over short distances; that figure was based on a source’s conversion error. The actual speed of a rosy wolf snail is less than 0.02 mph.

A wildlife ecologist specializing in large carnivores unfolds a mystery for listeners.
islands

Scientists, residents, and visitors have banded together for a massive biodiversity survey of British Columbia's Galiano Island.
Video • AO Docs