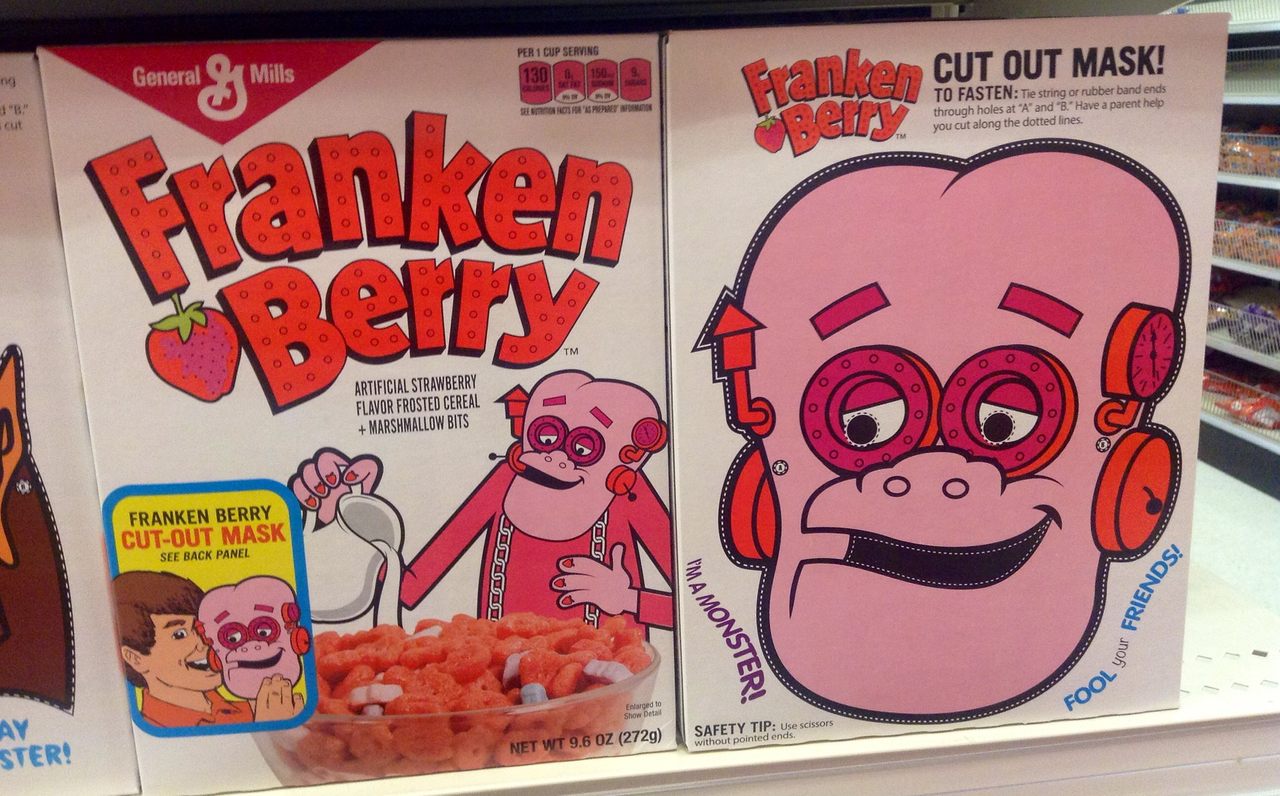 Franken Berry and the other Monster Cereals remain cult favorites. Mike Mozart/CC BY 2.0
In This Story
Destination Guide

Stephen King’s Cujo is best known for its titular villain, a rabid, killer St. Bernard. But tucked into a side plot is an even scarier adversary—Red Razberry Zingers, an innocent-seeming cereal that spurs a nationwide panic. The breakfast contains a dye that, although harmless, causes children’s intestines to become, in the words of one character, “as red as a stop sign.” It sets off a chain of incidents, starting with this:

“About three weeks after Red Razberry Zingers went national… the first mother had taken her little one to the hospital, nearly hysterical and sure the child was bleeding internally. The little girl, victim of nothing more serious than a low-grade virus, had thrown up what the mother had first believed to be a huge amount of blood.”

This may sound like one of King’s macabre inventions. But it was almost certainly based on a real occurrence. This is the tale of Franken Berry Stool: an officially recognized ailment that, although it seems goofy now, sent more than one kid to the ER with technicolor pink poop.

In March of 1971, hoping to piggyback off the success of Lucky Charms, General Mills introduced a new line of “Monster Cereals”—marshmallow-studded grain puffs with slightly spooky mascots. The first to arrive were Count Chocula, a cocoa-flavored vampire, and Franken Berry, a strawberry-tinted monster. In the advertisement announcing their arrival, the pair talk up their their nascent rivalry. “Don’t be scared,” Count Chocula says, popping out of a coffin-like cardboard box. “I’m the super-sweet monster with the super-sweet new cereal!”

Suddenly, a massive finger intrudes from stage left, followed by a big, pastel-pink brute—Franken Berry. “Piffle!” he yells, in a British accent worthy of Boris Karloff. “Here’s the super-sweet new cereal.” It was a tough call. Count Chocula’s cereal had chocolate “sweeties.” Franken Berry’s had strawberry ones. Both were, indeed, super-sweet. How was a red-blooded American kid supposed to choose?

The answer, for some kids, was easy: only one of them made going to the bathroom fun. Franken Berry got its strawberry hue from Red Dye Nos. 2 and 3, synthetic colorants that pass through the body undigested. Red No. 2 was banned in the U.S. in 1976, after it was tenuously linked to cancer in rats, but for decades, you could find it in everything from ice cream to hot dog casings.

Red No. 3 is still around, and is most commonly used in cake decorating gels, and the paint dentists use to show patients where plaque is on their teeth. A little dose of synthetic red can’t counteract the many other colorful things going on in your bowels—but swallow enough of it, and it pinkens everything it touches.

Untold kids experienced this side effect for months before it made the leap to medical infamy. In February of 1972, a 12-year-old boy from Maryland started pooping pink. This particular kid had a history of eating what he shouldn’t—according to his case report, he had gobbled down, and then thrown up, coffee grounds on two separate occasions—so after the pastel poops had persisted for two days straight, his mother took him to the hospital. Fearing some kind of internal bleeding, the hospital admitted him.

Doctors ran all kinds of tests before they finally hit on the potential culprit. “Further questioning of the mother revealed that the child had eaten a bowl of Franken Berry cereal 2 days and 1 day prior to admission,” attending physician John V. Payne wrote in a case study later published in Pediatrics.

After letting the boy’s digestive system clear itself, they set out to test this new hypothesis, giving him four entire bowls of Franken Berry. Sure enough, he pooped pink again. “The stool had no abnormal odor, but looked like strawberry ice cream,” wrote Dr. Payne. They sent the kid home—where the mother found his sister also pooping pink.

Despite Dr. Payne’s best efforts to spread the word, enough cereal-chomping kids showed up in ERs that the condition got a name: “Franken Berry Stool.” By then, Red Dye No. 2 was already on the way out, and General Mills soon quietly switched their go-to dye to the gentler Red No. 40.

For the moment, if you want your monster-themed cereal to provide a technicolor experience on both ends, try a bowlful of Boo Berry—a Franken Berry cousin that, due to its inclusion of Blue No. 1, reportedly still haunts eaters with stool that ranges from blue to vibrant green.

It's not just bread; it's a way of life.
food

The blocky confection took on a very different definition in England.
objects of intrigue

You can draw a line from the tiny toys to Apple Inc.
food

Around January 25, winter-bound villages in Iceland celebrate the return of the sunlight.
Video • Wonder From Home