The 200-Year Old Book That Sent the East Coast Into a Sex Panic - Atlas Obscura
Want to see fewer ads? Become a Member. 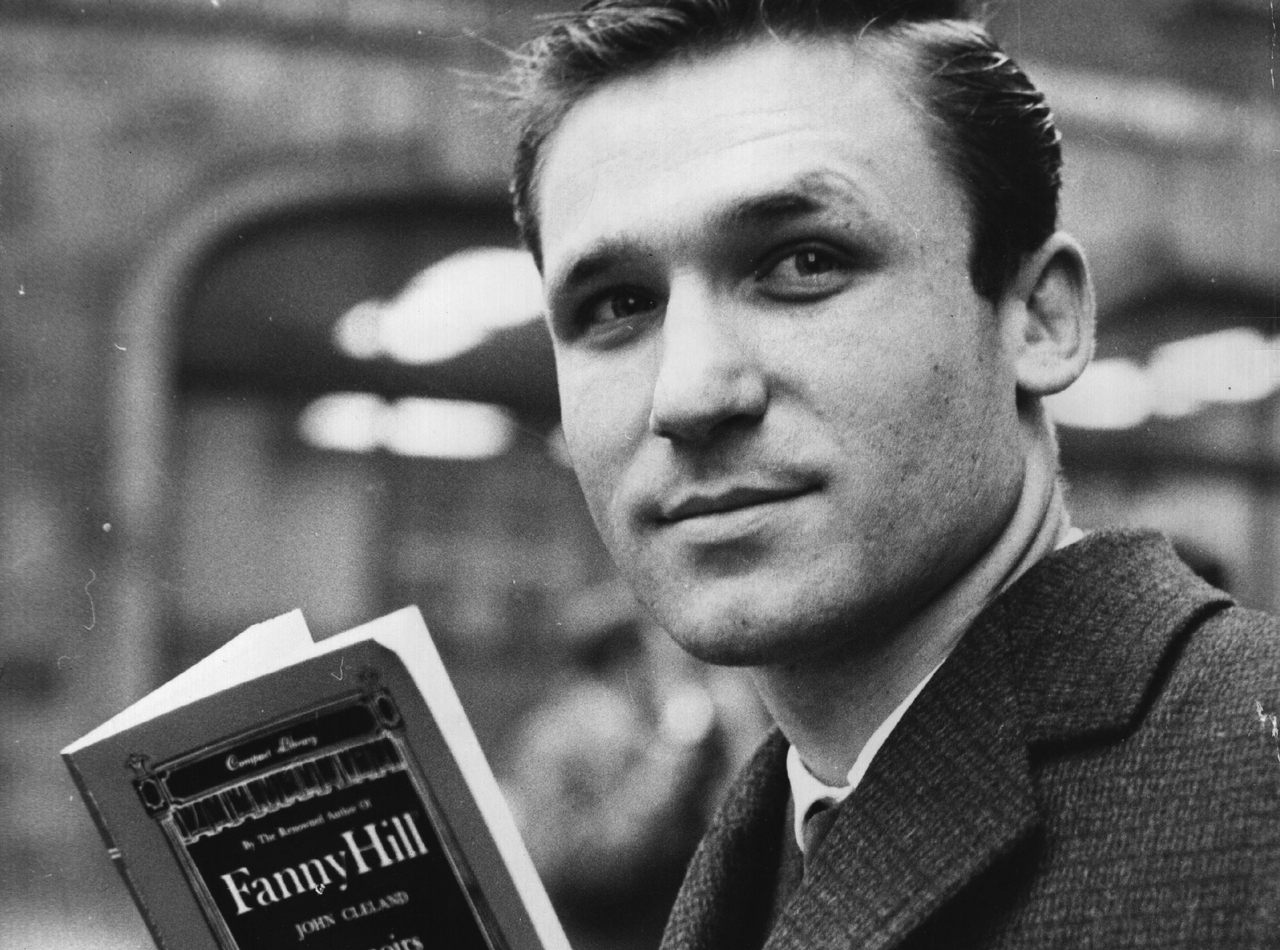 A London book distributor reads the sequel to Fanny Hill during the book's 1964 obscenity trial in the UK. Hulton Archive/Getty Images

In June of 1964, at a Hackensack, New Jersey courthouse, pediatrician Dr. William Reilly was called upon to give testimony regarding the dangers of reading about “abnormal” sexuality. In the course of questioning, Dr. Reilly was asked to expand upon his distinction between “abnormal sex” (an umbrella term under which he placed voyeurism, fetishism, homosexuality, and flagellation) and “normal sex.” It came down to, unsurprisingly, a question of pleasure; sex is “God-given act” but non-procreative sex ends with “anarchy.”

“Hedonism,” he opined, “is pure pleasure for pleasure’s sake. It offers nothing to a society.”

An illustration from a 1906 edition of Memoirs of a Woman of Pleasure. Public Domain

Written while Cleland was in debtor’s prison and published in two installments in 1748 and 1749, the epistolary novel is told from the point of view of Fanny Hill, a girl who, after being orphaned at 15, runs away to London and makes a living at a brothel. A lot of sex ensues. (From New York counsel’s motion to halt sales during trial: “In its 298 pages, the book describes in detail instances of lesbianism, female masturbation, the deflowering of a virgin, the seduction of a male virgin, the flagellation of male by female and female by male, and other aberrant acts, as well as more than twenty acts of sexual intercourse between male and female.”) Within a year of publication, Cleland and his publishers were arrested, and the book banned.

Still, Fanny found a way to her audiences. The novel proliferated through underground distribution, widely enough so that one unofficial copy, complete with original, lewd illustrations, drew the attention and scorn of the Massachusetts court in 1821, in the nation’s first ruling to ban an obscene book. It wasn’t until after Roth v. United States in 1957—the landmark case which redefined the nation’s definition of obscenity to require an obscene work be “utterly without redeeming social importance”— that a mainstream publisher, Putnam, dared to release it.

The blowback was immediate, and within a year, defense attorney Charles Rembar was representing Putnam in New York, New Jersey, and Massachusetts. Consistent among the panic was a real and tangible fear about the effects of such explicit literature on youth, and a reliance on religious testimony. In New York City, a mother directed her teenage daughter to buy the book to prove the ease with which a minor could access it; she brought her complaint to the D.A. who then brought a case to Albany asking for the prohibition of sales to minors. (He didn’t win.) After discovering her 15-year-old son had purchased the book, a Massachusetts mom brought her concern to the Massachusetts Obscene Literature Control Commission (a governor-appointed decency committee comprising clergymen, an educator, and a law enforcement official) who then advised the attorney general to move to ban the book.

The title page of the 1749 edition. Public Domain

Outside of the legal world, interfaith community groups were banding together to fight what they saw as a plague of immorality; a New York Catholic priest and rabbi joined in on a hunger strike protested pornography in general and Fanny Hill in particular.

Once the book was brought to trial, all manner of personal considerations and hypotheticals were suddenly fair game. What was Cleland’s motivation in writing—informing the reader about 18th century London, or simply titillating them? If the latter, can the book still be saved by coincidental social worth? On the flip side, why are readers reading? To be informed, or to be titillated? And should those in the latter camp ruin it for those in the former? Regarding the actual sex described: was it hyperbolic, or realistic? “Normal” or not? So vague was the concept of pornography that more than once prosecutors had to abandon questions directly related to it.

When the Massachusetts judge asked English professor Ira Konigsberg if the book was pornographic, Konigsberg responded, unsatisfactorily, “I know what I mean by pornographic. I don’t know what you mean.” (A precursor to the Supreme Court quote.) This scattered anxiety was unified on a holdover concept from a late-19th century British statute on obscenity: that the key trait of the obscene has the tendency to “deprave and corrupt those whose minds are open to such immoral influences.”

It is difficult, of course, to prove the effect of all of this immorality. In New Jersey, Dr. Reilly repeatedly referred to the unsubstantiated claim that reading pornography had “definitive” links to increased vandalism, juvenile delinquency, and promiscuity. For the average person, he said, a “constant perusal of this kind of material would definitely stimulate them to acts of sexual activity”—the obvious implication being that this wouldn’t be the good kind of sexual activity.

Still, the question wasn’t whether or not the book was erotic or pornographic—certainly it was. (Even Massachusett’s Assistant Attorney General John Sullivan admitted, “It did arouse prurient interest and impure thoughts in me. Fortunately I am well adjusted enough so it did not affect my daily life.”) The question was, does it have social value? Fanny Hill was an especially vexing book in this case. Lady Chatterley’s Lover and Tropic of Cancer had both been brought to trial (and both defended by Charles Rembar) and deemed protected by the First Amendment. But Fanny Hill was written by a poor prisoner who could by no stretch of the imagination be called a great writer. Fanny herself didn’t help matters. In his ruling against Fanny Hill, Massachusetts Justice Tom Clark described the woman as “nothing but a harlot.” In his review of the book, John Hutchens condemned Putnam for their scheme to “cloak Fanny in an unfamiliar respectability.” Here was a young woman who shed patriarchal expectations and used her body to earn, in her own words, “if not happiness, then at least affluence, or independence.” It was nearly impossible to separate disgust with the book from disgust with her.

A first edition of Lady Chatterley’s Lover, a book that was also subject to a censorship trial. Public Domain

In New York, though the book was briefly banned for the duration of the trial, the judge ultimately decided Fanny Hill had enough literary merit to not be obscene, but the book did not fare so well elsewhere. In December of 1964, New Jersey justice Morris Pashman ruled Fanny Hill obscene enough to “forfeit protection of the First Amendment.” In Massachusetts, both the lower and state Supreme Court ruled the book obscene. Putnam powered on.

In 1965, two years after Fanny Hill’s publication and over 200 years after it was written, Memoirs v. Massachusetts made it to the Supreme Court, which ruled 6 to 3 that the book was not obscene. Those who dissented were horrified—now, would any pornographic material be safe as long as it had the remotest social value? The answer, of course, was yes, which is why the sort of censorship preceding the case is now mostly unheard of. Today, Fanny Hill is published as a classic, studied in college, and celebrated as the still-revolutionary story of a woman who sought pleasure for pleasure’s sake, and got it.

What Happens When Crowds Try To Flee For Their Lives

Married Love by Marie Stopes was revolutionary in its frank depiction of sexuality.
art

How potboilers and pin-ups showed gay and bisexual women they were not alone.
ancient