Ranking the Pain of Stinging Insects, From ‘Caustic’ to ‘Blinding' - Atlas Obscura
Want to see fewer ads? Become a Member. 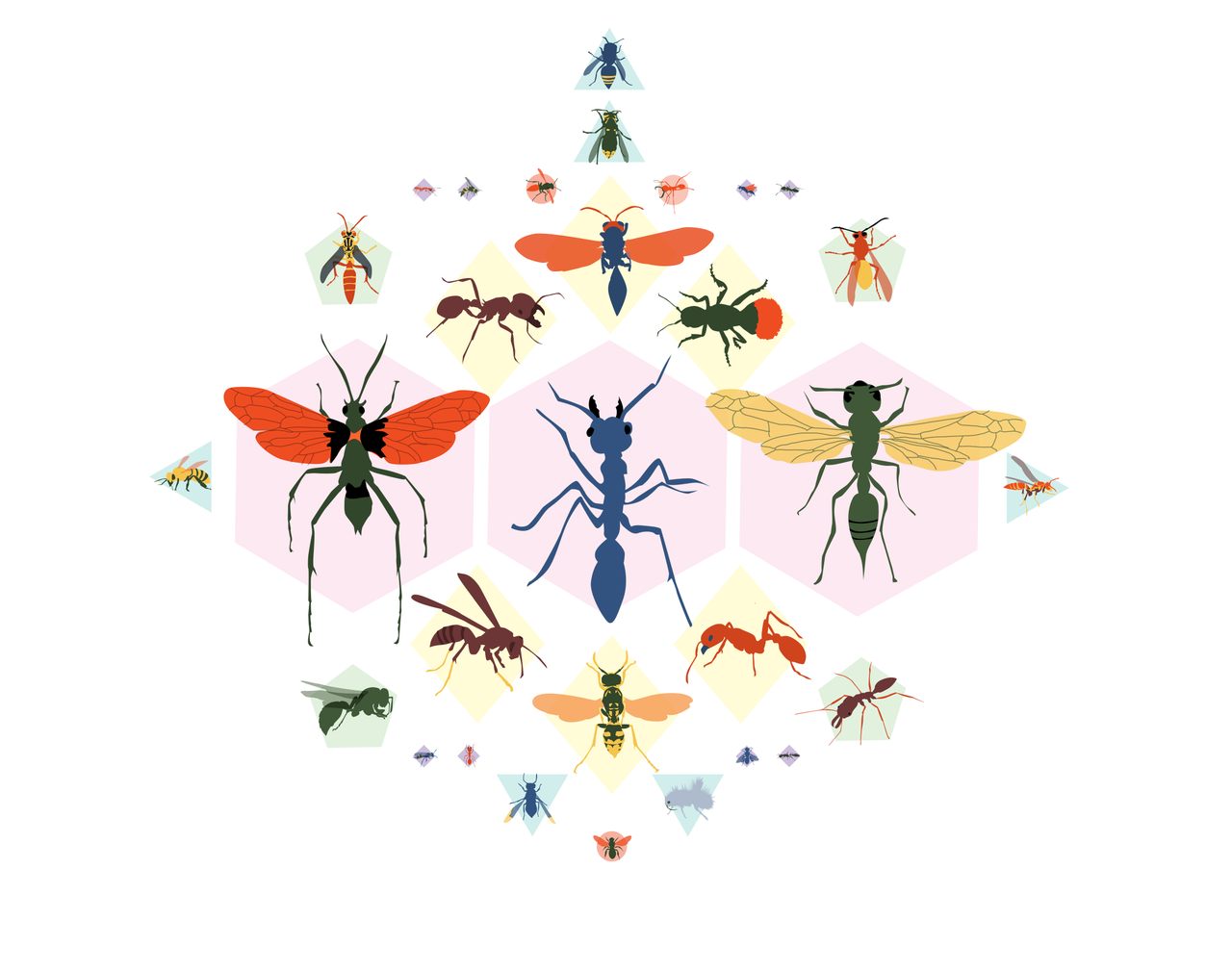 Trekking along a mountain in Guanacaste Province, Costa Rica, entomologist Justin Schmidt came across a nest of the tropical wasp species Polybia simillima, better known as the Fierce Black Polybia Wasp. The agile, buzzing insect has a reputation for having a painful sting. But, Schmidt casted fear aside and approached the nest buried deep inside a dark, densely prickly shrub. He was using a pair of clippers to remove branches, when the angry wasps exploded out at him like flying shards of glass, greeting him with sharp stings.

“A ritual gone wrong, satanic. The gas lamp in the old church explodes in your face when you light it,” Schmidt later wrote about his battle with the Fierce Black Polybia Wasp.

This description is one of 78 entries of ant, bee, and wasp stings in his Pain Scale for Stinging Insects, widely referred to as the Schmidt Sting Pain Index. Schmidt, a biologist at Southwestern Biological Institute and researcher in the entomology department at the University of Arizona, willingly offered his arm to different stinging insects of the order Hymenoptera to create the index featured in his new book The Sting of the Wild. The index ranks stinging pain on a scale of 1 (Red Fire Ant) to 4 (Warrior Wasp) and recounts Schmidt’s face-off with each insect with a poetic, and sometimes humorous, description. We have depicted a selection of insects included in Schmidt’s Sting Pain Index above, scaling the insects by how agonizing their stings are.

Schmidt, who has been called “The King of Sting,” stands steadfast in the presence of vicious stinging insects. He’s been stung over 1,000 times throughout his research career—his fascination growing from his childhood admiration for the fuzzy, brightly colored yellowjackets and bumble bees around his hometown in Pennsylvania.

He began collecting data for the pain index in 1973 after digging up sandy colonies of harvester ants in Georgia with a research colleague, Debbie, who would eventually become his wife. They were both stung, and Debbie described the episode as a “deep ripping and tearing pain, as if someone were reaching below the skin and ripping muscles and tendons; except the ripping continued with each crescendo of pain.”

“I realized [the harvester ant stings] were dramatically different from honey bees, wasps, and hornets. They are like day and night different,” says Schmidt.

He began to study the medical implications and biochemistry of the venom—the toxic compounds causing stings to often be much more painful than insect bites. Schmidt found that there was a difference in chemistry when the pain and skin reaction varied after a sting and set out to obtain a larger survey.

Collecting data on stings became Schmidt’s side project. While most people would flee, Schmidt goes out of his way to get to stinging insects. He’s climbed up a tree to collect an entire nest of black Parachartergus fraternus wasps and convinced a bus filled with scientists to pull over to a bull ant colony in South Australia. He self-assesses the sting of any Hymenoptera he comes across when out in the field conducting larger studies on velvet ants or sweat bees. To bring live specimens back to the lab to study their venom, he often uses his bare hands to grab fistfuls of the insect and stuffs them into vials. If he doesn’t get stung during that process, he’ll apply one to his arm to be stung once or twice. He doesn’t carry a first aid kit or ointments to prepare for a sting, only lugging ice in a chest to keep the specimens alive and a cellphone in case there is a dire emergency.

He has also found that researching stings prior to encountering the insect in the wild does not always give him proper warning of the severity or lack of pain. For example, South African Giant Stink Ants, which live in volcano-shaped colonies and grow up to 2/3 inches long, were reputed to have very painful stings, Schmidt explains. When he was picking up a couple hundred ants, he thought the stings were unimpressive, scoring the pain 1.5 in the index. The Giant Stink Ants’ putrid smell was perhaps worse than its sting.

“I described it as garlic oil dribbled in your wound, but they smell like really rotten, rank garlic that you never want to eat,” he says. “It could make you sick just from the fumes.”

He determines the stinging score by two components: the actual physiological harm and what he calls the “ouch factor.” While a universal definition of pain does not exist, Schmidt believes that everyone recognizes that pain comes in a variety of flavors. “Pain truth comes in two flavors, imagined and realized. With stings, our imagination is vivid and strong, even if the sting pain is not realized,” Schmidt explains in the book. He advises that if you are stung by an insect that he rates a four, that you should stop what you’re doing and seek medical aid. “They just shut you down. You can’t function in a normal fashion.”

For Schmidt, he’s lost the fear that would surface when he encountered a notoriously nasty stinging insect, but he is not numb to the pain. He recently worked on a hive of honey bees and was dressed for the over 100 degree weather in Arizona: a tee shirt and shorts under his bee suit. The honey bees pierced through his thin layer of protection, leaving him with many painfully aching stings. His scores are also similar to the pain evaluations of the few other entomologists who also document sting pain, he says.

Sample collection as part of a study in Costa Rica of the genetics of Africanized honey bees. These bees were intentionally provoked, something not recommended for the inexperienced. (Photo: Justin Schmidt/John Hopkins University Press)

What makes the Schmidt Pain Index unique is his elaborate retellings of the stings.

“These descriptions pretty much just hit me,” Schmidt says, who admits that he was never an “A” student in English. When he sits down to write a sting description, he’ll clear his head and think of memories that remind him of the sting—associating a strike of lighting to the sting of a Tarantula Hawk and the pain of a messy divorce with the sting of an Artistic Wasp. He started off describing a few of the stings in this colloquial manner, but realized that it was an effective way to inform people about how much each sting hurt. While the numerical scale is valuable to entomologists, most people don’t identify with numbers, he explains.

“Numbers are kind of an unnatural thing,” he says. “I can’t even remember the numbers. I have to look at my notebook and see how I evaluated it, whereas the descriptions are much more graphic. I think they’re just a much better way of communicating and conveying the essence of what the numbers are really trying to tell you.”

A Cookbook for Surviving the End of the World