Why There Is a Hidden World of Underground Cities - Atlas Obscura
Want to see fewer ads? Become a Member. 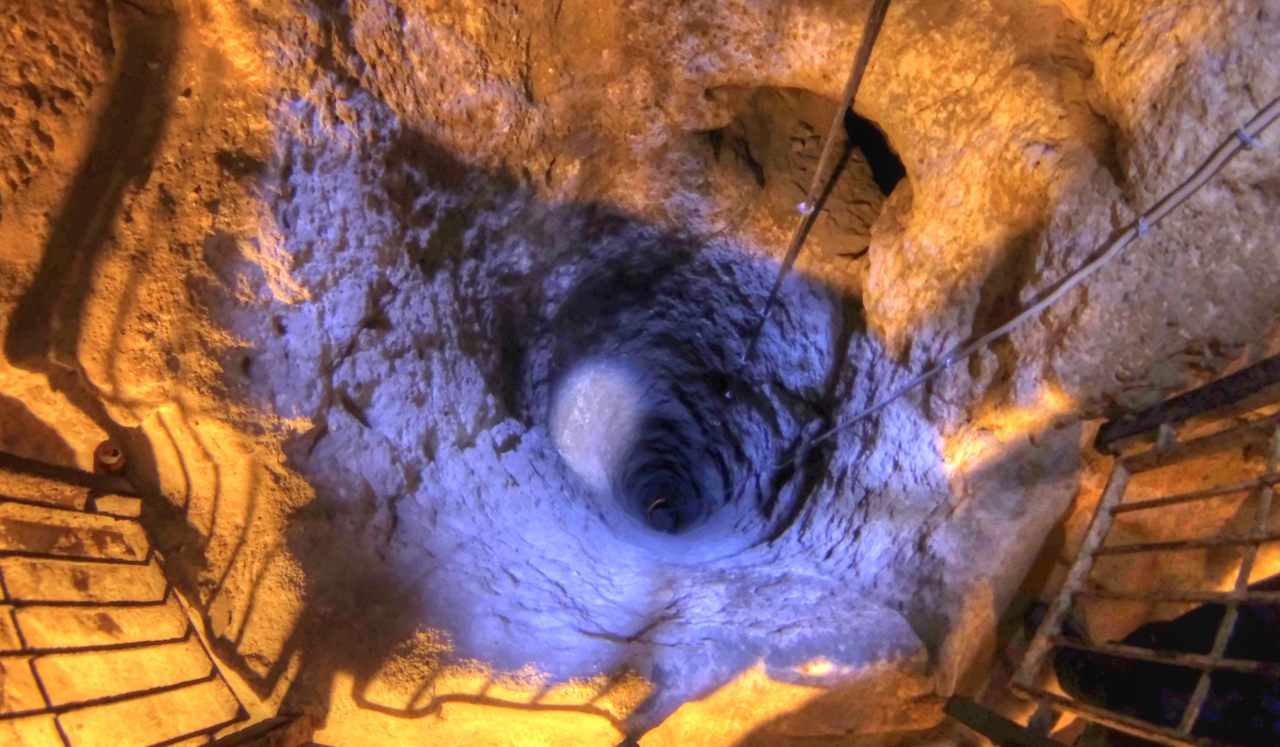 A phenomenal assembly of pueblos in New Mexico is the most complete example of ancient ruins north of the border.
Permanently Closed
Place

The history of underground cities is a complex and meandering one, ranging from the Ancient Era in the Middle East and Europe to those sunk during the height of Cold War paranoia, such as the bunker complexes of Cheyenne Mountain or Beijing’s Underground City. Now, we’re not talking about mole people (or even their modern namesakes). The primary reason for digging underground cities in the ancient world was for protection, as the spaces could be closed by rolling heavy boulders across the entrances. So-called “fairy chimneys” allowed for the ventilation of the chambers, and the smoke from within would rise to the surface, many miles away from the cities.

There are also more recent underground cities, some of which are simply underground shopping centers or networks of tunneled roads, like those in Vancouver and Tokyo, as well as others which will begin to be built only in the future, due to the constraints of small islands and the opportunities for vast wealth, which are being considered in Singapore and in Hong Kong. Here are five subterranean metropolises where humans seeking refuge found it by digging into the earth.

Some of the oldest known underground cities are in Spain, with the village of Setenil de las Bodegas showing evidence of occupation dating at least from the Roman invasion of Iberia in the first century CE, and possibly from much earlier. The town has an especially florid history, having been occupied by the Romans, as well as being a Moorish stronghold from the 12th century until the early 15th, when it was finally taken during the Christian Reconquest. The town is not what you would imagine an underground city to be, however, as it is mostly above-ground, with large boulders overhanging the houses.

The cities of Özkonak, Derinkuyu, and Kaymaklı in Cappadocia, Turkey, are some of the most complete (and most underground) of our underground cities. Denrikuyu is estimated to have once been capable of housing 20,000 people, and actually connects to Kaymakli via an underground tunnel, eight kilometers long. The cities are just three of a huge number of underground refuges in Turkey, and each is suggested to have been occupied since antiquity.

They contain churches, storerooms, and staggering staircases, as well as artefacts of Zoroastrianism, Byzantine Christianity and of more mundane activities, with oil presses and gigantic storerooms occupying large portions of the site. The history of the region provides an explanation of why so many underground cities exist in Turkey—not only was the region under constant pressure from foreign invaders (the Greeks, Persians, Scythians and Romans all fought over this territory for millennia), but the region also sheltered Christians during the persecutions of the Roman Empire and of the area’s later Muslim overlords.

Petra, in Jordan, was settled as early as 312 BCE, although the area around the city had been settled around 7000 BCE. It is mentioned in accounts of Egyptian military campaigns, as well as in the Biblical book of Exodus, as the country of the Horites, with the city itself referred to as Sela, or “the cleft in the rock.”

Archaeologists believe that the city was originally settled as a means to control the natural reservoirs that form beneath it, or possibly as a burial site. Writers such as Pliny the Elder recognized Petra as a major trade site between Gaza and Syria, and then on into Rome, which allowed the city to prosper. It wasn’t until its conquest by Rome in 106 CE that the city began to enter a slow decline. The site was forgotten, until 1812, when it was rediscovered by Swiss explorer Johann Ludwig Burckhardt. The site is now on the UNESCO Intangible Cultural Heritage List, and the agency declared Petra to be ”one of the most precious cultural properties of man’s cultural heritage.”

The Pueblo People (or the Anasazi, “ancient enemies” in the language of the Navajo) first began to settle in what is now the southwestern United States in around 1300 BCE. Their famous, cliff-side pueblos, such as the Chaco Canyon and Mesa Verde sites, were not first constructed and occupied until around 1100 CE.

Although not all the Pueblo People lived in the cliff-houses, these are what the civilization is best remembered for. Most sit within the Mesa Verde National Park, which is the only National Park in the United States dedicated as a National Cultural Park. More than 4,000 archaeological sites sit within this 81 square mile park. The current scientific consensus as to the decline of the Pueblo People’s civilisation is linked to a drought that lasted in the area for a quarter of a century.

Other underground cities exist, although not of such ancient provenance. Matmâta, in Tunisia, is famous as the home of Luke and Anakin Skywalker in its role as the set for the planet Tatooine. Coober Pedy, in South Australia, is almost entirely underground, was only founded in 1916, and now has a population of 1,600. The Wieliczka Salt Mine, beneath the city of Wieliczka, in Poland, was first exploited in the 13th century, and until production stopped in 2007, was one of the world’s oldest salt mines still in operation. The caves include a cathedral, carved entirely (chandeliers and all) from salt.

And now into the M.A.D world of the Cold War. Huge underground cities exist in the United States, at Cheyenne Mountain, and in Great Britain, at Burlington (or “Subterfuge,” as it was enigmatically called). These glorified nuclear bunkers (which, for some reason, Switzerland has enough of to house their entire population) are rumored to be able to protect vast numbers of people — in the case of Burlington, more than 4,000 for a period of around three months. The numbers for Cheyenne Mountain are not so concrete, as the site is still occupied by the US military (as NORAD’s Alternate Command Centre).

China, on the other hand, has built an underground city worthy of the name.

Dixia Cheng, or, more simply, “the Underground City,” sprawls for 85 square kilometers beneath Beijing, with more than 90 currently known entrances. At the time of its construction the Chinese government claimed it would be able to accommodate all of Beijing’s civilian population.

While it has never been put through its paces in any official capacity, the Underground City is still maintained by the city government, and is apparently in a good state of repair. The tunnels have been designed to make longterm survival possible, with mushroom farms, silk factories, cinemas, a hospital, and even a roller skating rink.

Most of these underground cities have either incredibly small populations, or were born from some now-extinguished threat, and will, it seems, be slowly abandoned (or already have been). Yet there are still underground cities that pop up around us, with Russian police raiding an illegal underground city with a population of around 300 in 2013, which, despite its small numbers, still featured an underground casino, a Turkish cafe, and movie theatre. There are also plans afoot in cities like Singapore, Helsinki, and Hong Kong to try and avoid skyrocketing property prices (in Singapore’s and Hong Kong’s case, the fact that ever-more people are living on their tiny islands) by expanding their cities’ footprints deeper underground. And as the cities of the Pueblo Peoples, Petra, and the Cappadocia region show us, it might not be such an impossible idea.