The Macaroni in 'Yankee Doodle' Is Not What You Think - Atlas Obscura
Want to see fewer ads? Become a Member. 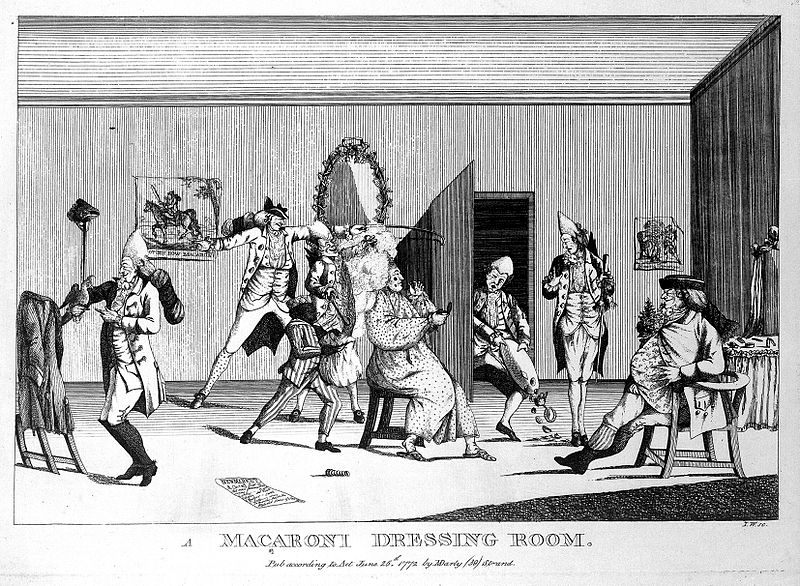 Generations of American kids forced to sing “Yankee Doodle” have grown up justifiably puzzled by its lyrics.

Though the song, set to an upbeat melody, appears to satirize Americans, it is today treated as a patriotic anthem. Anyone who is not given proper context—that “Yankee Doodle” was originally created by the British to ridicule Americans, and that American soldiers reclaimed it during the Revolutionary War—might well question the point of the song.

But perhaps the most confounding part of “Yankee Doodle” is its opening. To the average listener, the first verse appears to describe an American man who confuses a feather for a piece of pasta:

Yankee Doodle went to town
A-riding on a pony,
Stuck a feather in his cap
And called it macaroni.

The “macaroni” in question does not, however, refer to the food, but rather to a fashion trend that began in the 1760s among aristocratic British men.

On returning from a Grand Tour (a then-standard trip across Continental Europe intended to deepen cultural knowledge), these young men brought to England a stylish sense of fashion consisting of large wigs and slim clothing as well as a penchant for the then-little-known Italian dish for which they were named. In England at large, the word “macaroni” took on a larger significance. To be “macaroni” was to be sophisticated, upper class, and worldly.

In “Yankee Doodle,” then, the British were mocking what they perceived as the Americans’ lack of class. The first verse is satirical because a doodle—a simpleton—thinks that he can be macaroni—fashionable—simply by sticking a feather in his cap. In other words, he is out of touch with high society.

Two macaroni doctors, with their wigs and canes propped up behind them. (Photo: Wellcome Images, London/CC BY 4.0)

But what is fascinating about those fashionable British macaronis is how quickly they fell out of favor—and how, within a decade, a word that once denoted worldliness became synonymous with excess and male femininity.

It helps to think of the macaronis in waves. The first wave—those aristocrats returning from the Grand Tour in the 1760s—made macaroni fashion emblematic of social status. While their rather large wigs and slim clothes were seen as a bit feminine, they remained well within the bounds of acceptability, and actually became quite trendy.

But in the 1770s, as macaroni fashion spread beyond its aristocratic roots, these traces of femininity were amplified many times over. Thus came the second wave, when macaroni men were defined by their effeminacy.

As The Macaroni and Theatrical Magazine noted, at this time the word macaroni “changed its meaning” from a sophisticated Brit to “a person who exceeded the ordinary bounds of fashion.” Seemingly overnight, the term “macaroni” became one of ridicule, and entire industries sprung up in order to deride these macaroni men.

The new macaronis were characterized in a relatively singular way: most were gaunt men with tight pants, short coats, gaudy shoes, striped stockings, fancy walking sticks, and—most recognizably—extravagant wigs. Humorous depictions showed macaroni men wearing giant wigs topped off by comically small tricorn hats and attached to thick pigtails. Often these wigs were heavily powdered and were nearly half the size of the macaronis themselves. One representative comic showed a macaroni with hair so long that he needed a servant to carry it around for him.

A macaroni doffs his hat in the street as behind him, his hairdresser supports the weight of his wig. (Photo: Wellcome Images, London/CC BY 4.0)

In England at the time, masculinity was about moderation: masculine men were polished but not extravagant, and their wigs were sober. Women, in contrast, did not wear wigs, but they padded their coiffures with so much decoration that their hair became famous for its height. (According to “Hair, Authenticity, and the Self-Made Macaroni,” a popular joke at the time “held that because their hair was so tall, ladies were forced to sit on the floors of their carriages in order to fit inside.”)

That macaronis emulated many facets of female dress did not escape the notice of English commentators, who variously referred to macaronis as “that doubtful gender,” “hermaphrodites,” and “amphibious creatures.”

One song described a macaroni as thus: “His taper waist, so strait and long, / His spindle shanks, like pitchfork prong, / To what sex does the thing belong? / ’Tis call’d a Macaroni.”

The Oxford Magazine similarly described the macaroni as not belonging to the gender binary: “There is indeed a kind of animal, neither male, nor female, a thing of neuter gender, lately started up among us. It is called a Macaroni. It talks without meaning, it smiles without pleasure, it eats without appetite, it rides without exercise, it wenches without passion.”

Whether these critiques of macaronis insinuated homosexuality is debated. Certainly it is difficult to generalize one way or other: though some commentators appeared to frame macaronis in terms of same-sex attraction, not all did. Regardless, macaronis became a fixture of popular imagination for their rejection of traditional gender roles. Rumors circulated that macaronis drank only milk, avoided eating roast beef at all costs, and disdained popular gathering places like bars and coffeehouses. According to “The Darly Macaroni Prints and the Politics of ‘Private Man,’” they were also frequently compared to devils, reptiles, monkeys, and butterflies.

In fact, the public shaming of macaronis grew so commonplace that it became an industry: in the early 1770s, Mary Darly, a cartoonist by trade, devoted so much energy to caricaturing macaronis that her store in London became known as “The Macaroni Print Shop.” Darly’s ridicule of macaronis became the first widespread use of the caricature as a means of social commentary.

In one caricature, entitled “What, is this my son Tom?,” a farmer pokes at his son’s wig with a whip, unable to believe that his son has taken on such an effeminate dress. The son, meanwhile, is presented as ridiculous: his hair and pigtails are gigantic, his cane is inexplicably tassled, and he carries around a decorative sword.

A caricature of the macaroni fashion. (Photo: Library of Congress/LC-USZ62-115003)

The cartoon’s description captures the remorse of an older generation convinced that its youth were wrecking the culture:

The honest Farmer, come to Town,
Can scarce believe his Son his own
If thus the Taste continues Here,
What will it be another Year?

In the 1770s, satirical prints like these proliferated, and they came to define macaronis in the public consciousness. Today, it is difficult to separate these caricatures from the actual macaronis. It is even likely that portrayals of macaronis were highly exaggerated; by some accounts, macaroni dress in the 1770s did not in fact stray too far from the norm.

And though humor was a primary driver of these caricatures, some scholars—like Amelia Rauser—argue there is also another motive: cartoonists, like the public at large, were attracted to the striking singularity of the macaronis. Macaronis were certainly odd, but they were also brave. In a society that emphasized individuality, it is not hard to imagine that they became folk heroes of a kind—and that many of the people who laughed at them felt a tug of longing for the freedom with which they lived.

By the time the macaroni fashion trend died in the early 1780s, the legacy of these early gender-role rebels was preserved almost entirely through caricatures. Well, and through that peculiar song, where a man confuses a feather for macaroni.

Why Doctors Once Treated Fevers and Hysteria With Mashed-Up Bedbugs

In 1980, a gay historian’s book about Catholic Church-approved homosexuality enraged both gays and Catholics.
theaters