It was the crime of the century followed by one of America’s most intense manhunts: for 13 days after shooting President Lincoln, John Wilkes Booth was on the lam. The drama was baked into the act itself: ”Sic semper tyrannis,” yelled John Wilkes Booth as he leapt onto the stage at Ford Theater after shooting the 16th president in the back of the head. Hobbling on a broken leg, Booth escaped through the backstage door, familiar to him as actor. He shoved it open to find a horse waiting for him and then took off into the mild spring night.

But how did he avoid the authorities for almost two weeks? On the 150th anniversary of Lincoln’s assassination, here is an account of Booth’s time on the run—and, ultimately, his capture and death.

It is about 10:30 PM as John Wilkes Booth rides past the Capitol, along Pennsylvania Avenue and onto 11th street. He sees his destination in the distance —he old Navy Yard Bridge (today, the 11th Street Bridge). But Booth’s escape almost ends before it starts: a guard stops him. Booth calmly tells him that he was heading home at this late hour because he had wanted the moon to light his way. The guard allows him to pass.

Booth meets up with a friend and co-conspirator, David Herold, on the road to Surrattsville, about eight miles from Ford’s Theater, right near Soper’s Hill.  Together, they go to Surratt’s Tavern in Surrattsville, Maryland (now called Clinton) where they retrieve items they had asked Mary Surratt to leave for them, namely guns, binoculars, ammunition, and a bottle of whiskey. There’s a drunken tavern keeper there, but he pays no mind to them. 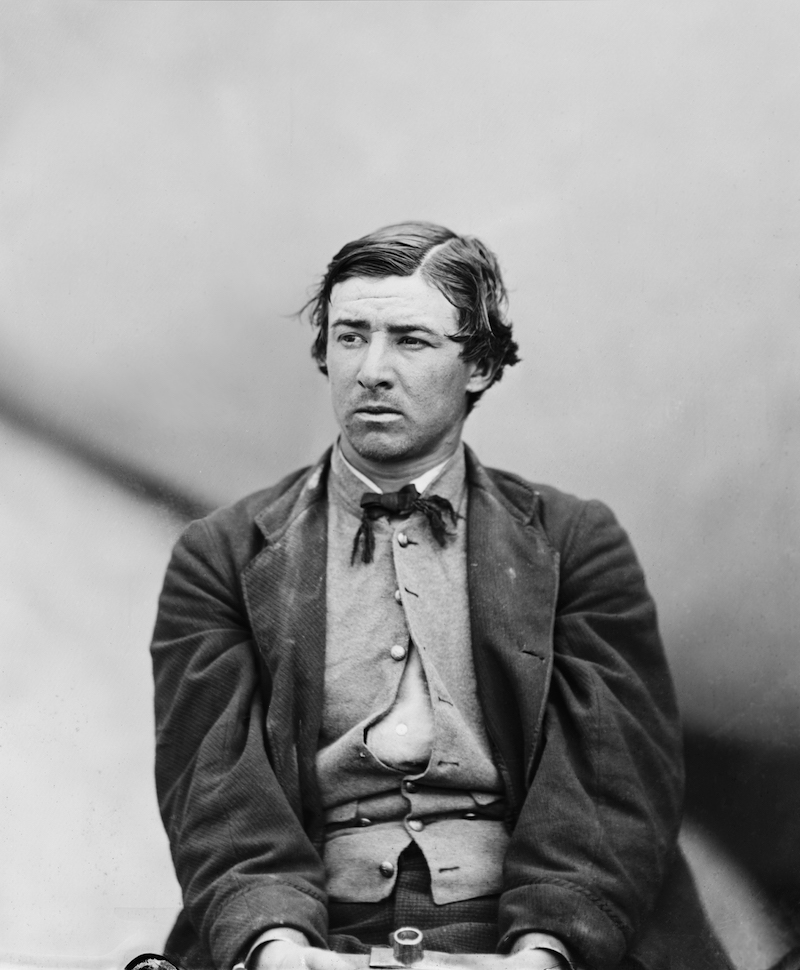 Around 4 a.m., they arrive at Dr. Samuel Mudd’s House. The good doctor sets and splints Booth’s broken leg. He allows the men to sleep in his house, not knowing who exactly these men actually are.

When Booth awakens from his slumber, he shaves off his mustache to disguise himself. He also demands a glass of brandy from Mrs. Mudd, who tells him they only have whisky. Disgusted, they leave the residence or more likely, Mr. Mudd kicks them out. Booth still pays Mudd $25 for his help.

The pair head east of Zekiah Swamp, but get lost in the dark. This won’t be the last time these two will lose their way. Eventually, they find the home of Oswell Swann’s, a half-African American, half Piscataway Indian tobacco farmer at today’s corner of Cracklingtown Road and Burnt Store Road near Hughesville, MD. Booth offers to pay Swann $2 to lead them to William Burtle, a Confederate agent, who lives just west of Swann. Swann also provides them with foodstuffs for another $5, like milk, bread, and whisky.

On the way there, Booth changes his mind and gives Swann another $5 to take them to “Rich Hill,” the home of Samuel Cox. 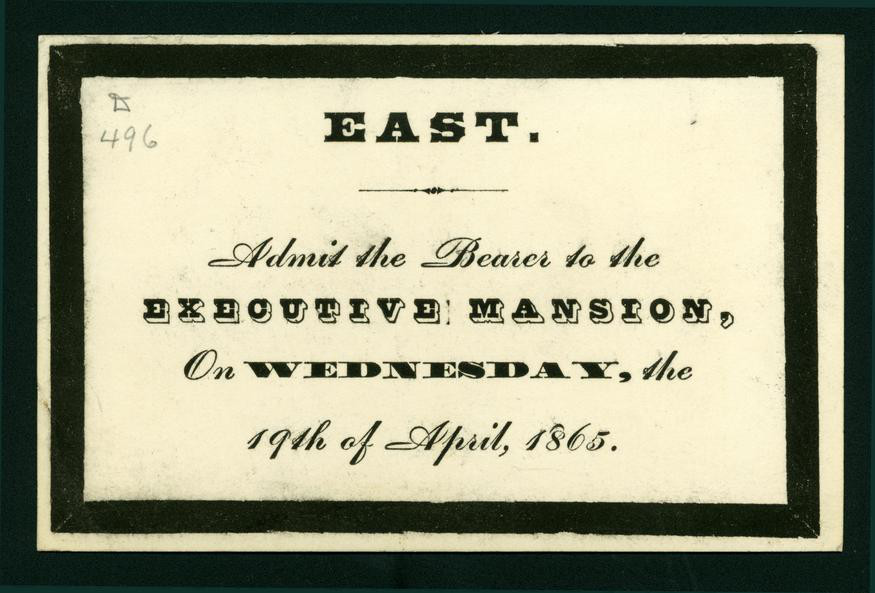 They arrive at Rich Hill at about 1 a.m. Cox knows who these men are, but let’s them in anyway. At about 4 AM, they come out of the house to see that Swann is still waiting for them. He wants his 12 dollars. Booth pays him and he goes away.

Realizing his own danger, Cox decides the two men can’t stay in the house. So, he instructs them to go to the pine thickets beyond his property. He says he will send a man to help them later in the morning. Booth is rather perturbed about this, thinking that a Southern sympathizer should show some Southern hospitality.

Mid-morning, Thomas Jones arrives and instructs the men to cool their heels until the next day. Herold and Booth spend Easter Sunday in very uncomfortable conditions, in a pine thicket. 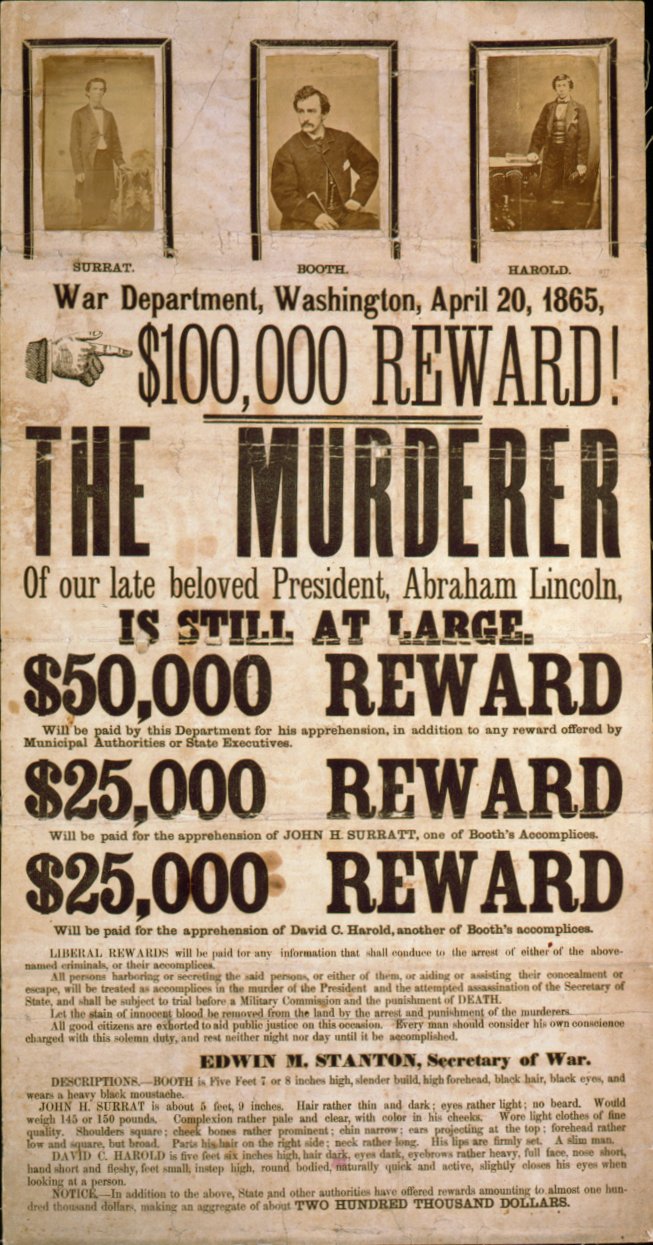 At 10 a.m. the next morning, Jones whistles a “secret melody” to let Booth and Herold know that he is not an intruder. He comes bearing food, whisky, and newspapers, in which Booth is eager to see. He wants to know how the country is reacting to his “good deed.” Needless to say, not well.

Jones, a Confederate agent and former scout, tells the men they must wait longer to cross the Potomac into Virginia. He can hear Union troops in the distance and moving from their hiding spot now would be dangerous.

This news and the worsening condition of his leg put Booth in a foul mood.

Twenty-four hours later, Jones comes back to the pine thicket. He brings the men whisky and food, but instructs Herold to dispose of the horses at once. They are neighing too loudly.

Later, as Booth lies feebly on the ground, Herold takes the horses to a nearby quicksand morass and shoots them in the head. They sink. 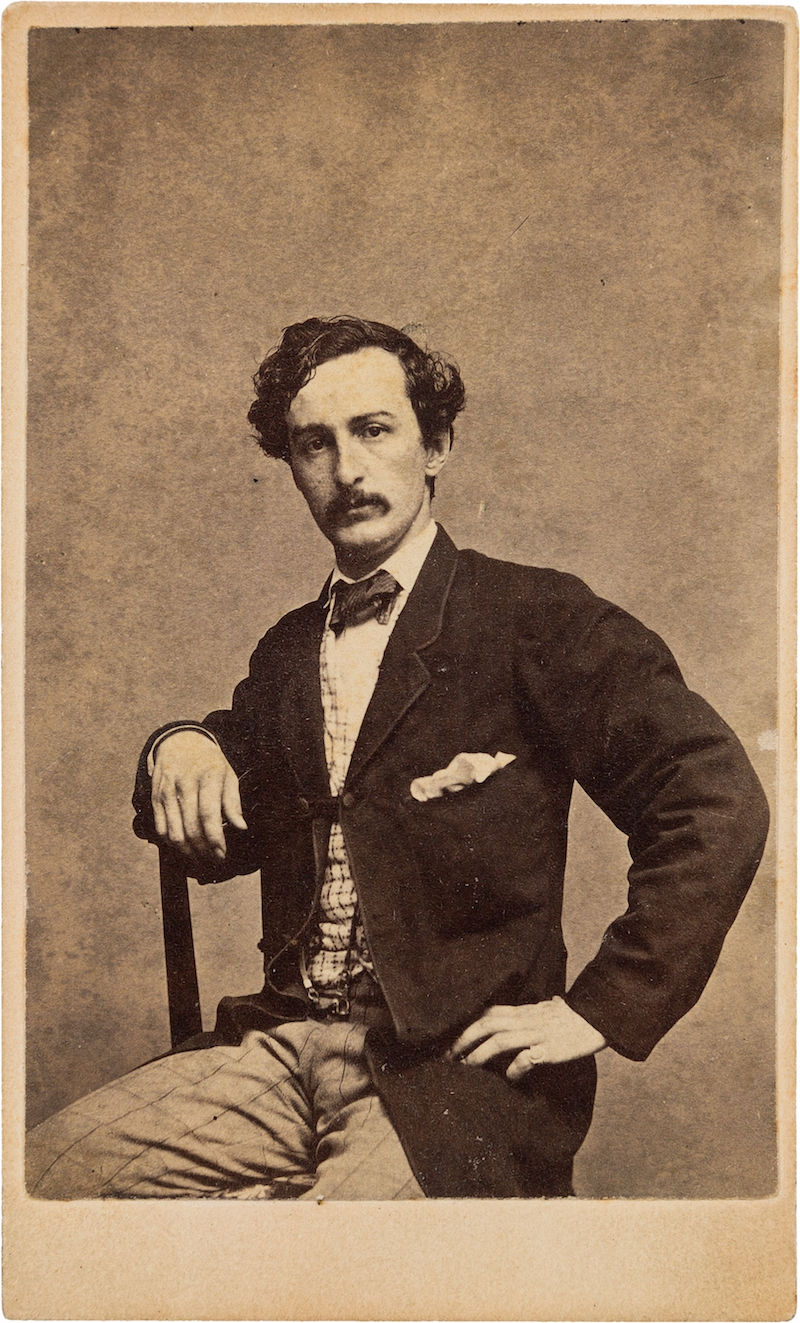 As Lincoln’s funeral service begins shortly after noon in the White House East Room, Booth and Herold are still in the pine thicket near Rich Hill. They are impatient, but heed Jones’ warning. Plus, they have plenty of whisky.

At dusk, Jones comes back to the makeshift campsite and whistles the familiar three-note tune. As Booth and Herold approach, he tells them “darkness favors us.” They walk three and half miles to the Potomac River, making a pit stop at Jones’ house. He doesn’t allow them inside, but brings them food and whisky.

They continue on, with Booth riding Jones’ horse. They arrive at Dent’s Meadow and board a skiff owned by Jones. Booth tries to offer him money for his help, but Jones’ refuses - save for the 19 dollars he paid for the skiff in Baltimore a year ago.

They venture out into the Potomac, aiming for Virginia (Machodoc Creek to be exact.) They again get lost due to the darkness and fog. They end up in Nanjemoy Creek, Maryland.

They hit shoreline and conceal the boat. Booth and Herold walk to “Indiantown,” a farm owned by Herold’s friend Peregrine Davis. They find Davis’ son-in-law John J. Hughes there. He agrees to feed the fugitives, but they must hide somewhere else.

Annoyed, they go back to the marshland where they parked their boat, waiting for the cover of darkness to try again at conversing the Potomac into Virginia.

Rather oddly, as night settles in, they don’t go anywhere. They remain in the marshlands. Perhaps Herold is too fatigued to row further or Booth is in too much pain to keep moving. Or maybe they just both fall asleep, not rising until the sun awakens them. Either way, they remain there another day.

Well rested, they again wait for darkness to embark on the next leg of their escape. Almost immediately after dipping into the Potomac, they cross into the path of a Union gunboat. Luckily for them, it doesn’t spot them. The fog might have concealed them. They are rowing for hours in the cold.

In the early morning, they touch down in Gambok Creek, Virginia. While Booth is thrilled to be in Virginia, they are still in the wrong place. They were trying to get to Machodoc Creek and Mrs. Queenberry’s Place. Fortunately, the large farm is only a mile southwest. Herold hikes it as Booth waits by the boat.

Mrs. Queenberry has been expecting the fugitives, though a few days prior. Upon meeting Herold, she sends for Thomas Harbin, a Confederate agent. Together, they all go back to Gambo Creek, fetch Booth, and ride the eight miles to  Dr. Richard Stuart’s house in Cleydael.

They arrive around 8 p.m. Stuart gives them food and whisky, but refuses to treat Booth or allow them to stay at the house. Instead, he directs him to the cabin of a free African-American couple, William Lucas and his wife.

Booth and Herold arrive around midnight, angry that they were again denied “proper treatment.” They force Lucas and his wife from their own home at knifepoint. Booth drinks all of Lucas’ whisky and dozes off.

The next morning, Lucas’ son, Charlie, drives them the ten miles to Port Charles, where they meet up with Confederate soldier William Jett. He takes them to the Peyton House, a few miles down the road. The only two people in the home are two unmarried women, who initially invite them to stay the night but that offer is rescinded when they realize how “inappropriate” it would be for two men to stay alone in a house with two maids.

They venture on to Richard Garrett’s farm about three and half miles away. Booth convinces the family that him and Herold are cousins and he is a “wounded Confederate soldier” in need of shelter. They agree to give Booth an actual real bed. For some reason, Herold decides he is going to town to get a new pair of shoes. He doesn’t return until the next day.

Booth’s journey will end here at the Garrett Farm.

Booth sleeps late into the morning, tired from his journey and unaware of farmer hours. The Garrett sons are forced to awaken him. He eats breakfast, like a “civilized man,” and helps himself to whisky. He also plays games with the kids.

The Garretts are suspicious and, again, question Booth. He keeps up his story.

Herold returns with a new pair of shoes. Booth tells him of his intention of staying another night. Herold doesn’t like this idea, for he thinks they should keep moving. Booth disagrees and says they are staying.

Unlike the night before, they are not allowed to sleep in the house. The family makes them sleep in the tobacco barn.

Booth and Herold don’t get much sleep. At 2:30 a.m, the 16th New York Cavalry surrounds the barn. It is unlikely the Garrett family has tattled on the fugitives, but they certainly are not getting in the Cavalry’s way. David Herold immediately surrenders. Booth does not.

The Cavalry sets the barn on fire, smoking Booth out. Trying to escape, he gets shot in the neck. Less than five hours later, at 7:15 AM, John Wilkes Booth dies. David Herold would later be hung. 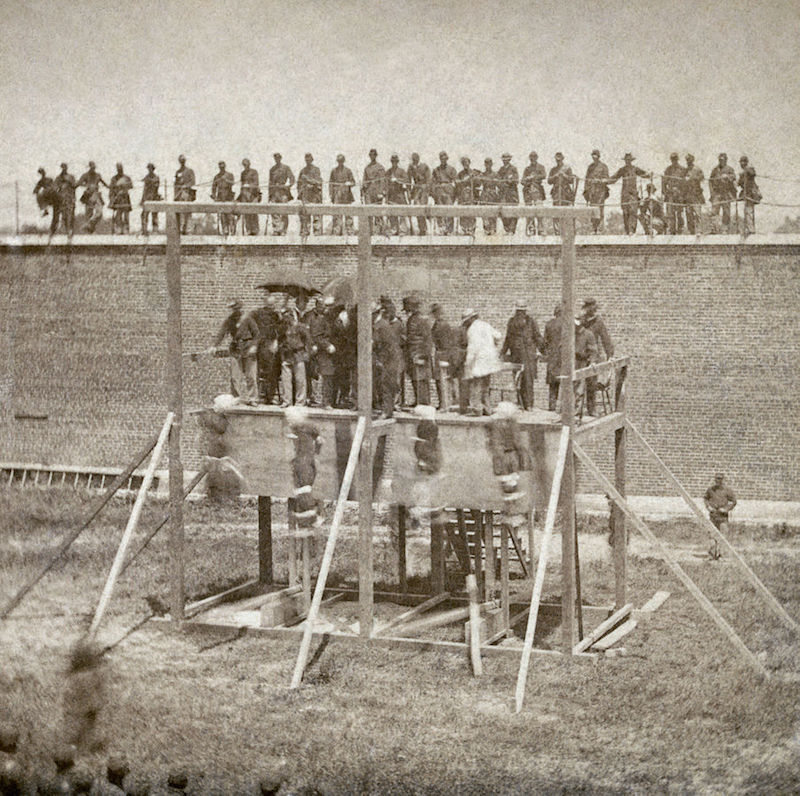 Special thanks to these sources for the story:

7 Places That Could Give You Superpowers, but Will Probably Kill You

The Strange History (And Future) Of Lincoln's Funeral Train