The Sleepy Peruvian Town that Comes Alive Each Year to 'Please the Virgin' - Atlas Obscura
Want to see fewer ads? Become a Member. 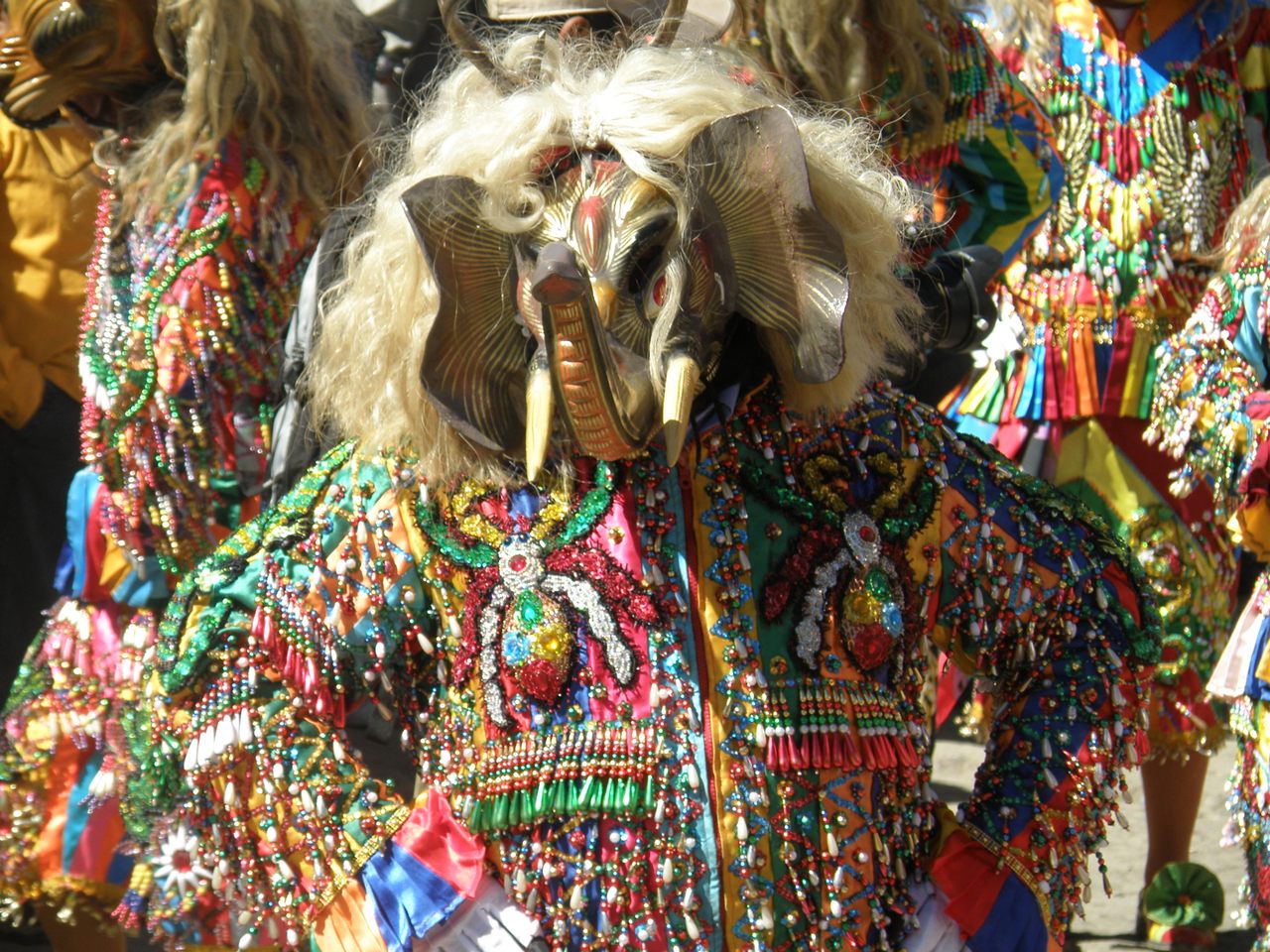 The Fiesta de la Virgen del Carmen is celebrated in Paucartambo, Cusco, from July 15-18 Photo courtesy of Silvio Campana-Giusti.
In This Story
Place

Ain't no party like a ghost town party.
Destination Guide

On any other day of the year, Paucartambo is a small, tranquil Andean town where a fly doesn’t repose on a windowsill undetected.

But if you venture down there from Cuzco any time between July 15 and 18, you will stumble into a festival marked by an incessant blaze of color and music. The rhythm of folkloric dances floods the crowded streets. Masked colonial characters wear impossibly detailed costumes that often depict hand-embroidered patterns and images of nature and religious figures.

No matter when you visit, however, one thing will be certain: life revolves around those four short July days when the Fiesta de la Virgen del Carmen is celebrated.

The festival of Paucartambo is considered the epitome of religious and cultural syncretism that arose from the colonial period. Its beauty lies in the merging of indigenous and Catholic symbols and traditions to celebrate the blessing of the Virgin through song and dance.

Wearing beautiful, comical, and frightening masks, and adorned with intricate costumes, there are 19 dance groups. Each of them represents or parodies a colonial character. The three groups that take the center stage of the festival are the Qapaq Qoyas, highland merchants come to town to trade; the Qapaq Chunchos, Antisuyo warriors who protect the Virgin; and the Qapaq Negros, the slaves brought to work on the mines who have devoted their life to the Mamacha.

Other highly notable characters are the Saqras, or playful demons, who are there to tempt the Virgin and the audience, and the Maqt’as, who are both beloved and feared. They are responsible for keeping order, and they take to their task with complete lawlessness. Get in their way or the way of dancers and you will be whipped, sprayed with suspicious substances, or attacked with taxidermied animals.

Over the following three days, the dancers participate in a series of symbolic rituals that range from the somber to the artistic to the festive. The dancers jump through fire to cleanse their souls, serenade the Virgin with solemnity, and go to the cemetery to visit and sing to their departed members. They also light fireworks, throw bread and gifts to the audience, and pull pranks, like flailing around balls of fire and spraying beer over whoever is in sight. In its characters and rituals, the festival brings together feelings of both joy and sorrow.

The culminating ritual is the guerilla, a fight between the Qapaq Qoyas (highland merchants) and the Qapaq Chunchos (Antisuyo Warriors). The merchants, who are said to have brought the Virgin to Paucartambo by mistake, try to steal her and bring her back with them to the highlands, while the warriors use their spears to protect their Mamacha. One by one the merchants fall and the demons come with a (literal) cart of fire to take them to the pits of hell.

As a visitor, it is easy, to fall into the rhythm of the town, to become inebriated with the songs that work much faster than the constant supply of free alcohol. But then the festival ends and you get back on a bus to the Inca capital.

For Paucartambinos, the festival is never truly over. Their entire lives, it seems, are lived in preparation of the opportunity to show their devotion to the Mamacha. Valeria Villafuerte Wilson, who has been dancing as a Qoyacha (young maiden) since she was five, enthusiastically claims, “our year is from July to July.”

Her father and her siblings are also dancers, and their life revolve around the festival. She even claims that she specifically looks for jobs that will allow her to participate in it each year. And when a work conflict arises, the priorities are clear. Her dad has more than once found himself declaring that if his job does not give him permission to attend the festival, he will simply quit. This is a sentiment echoed by most dancers who live outside of Paucartambo.

Being a dancer is no small responsibility. To even be accepted into a dance, you have to prove yourself a worthy candidate. Some people spend six or seven years trying to join a dance before they are admitted. This is especially true for women, since there are fewer dances that include them, and only unmarried women are allowed in them. Once you have joined a dance, you make a solemn promise to the Virgin that you will be back the next year to offer your dance to her.

Angela Bravo Chacon, a political scientist whose family lives in Paucartambo and who has attended the festival every single year since she was four months old, explains that many of the dancers have made a personal promise to the Virgin in exchange for a request—a promise that is not taken lightly.

This is the case with Valeria and her family. They started dancing, she says, because her father promised the Virgin that he would dance for her if she helped cure Valeria of heart disease. Breaking such a promise would be inconceivable to them. When they are not dancing, they are practicing. Like all other dancers, they spend the year outside of these four days rehearsing the routines and working on costumes, each of which is designed to be unique and personalized.

While the dancers are central to the festival, they are not the only ones whose lives are defined by it. Those who don’t dance are often as committed as those who do. The members of Angela’s family, for example, are faithful participants, despite not being, as she puts it, “very Catholic.” She explains that while they are not strict followers of the religion, they are fervent followers of the Virgin: “The festival has a lot of popular religiosity. The relationship that people have with Mamacha Carmen is very personal and mystical, and breaks from the structures of the Church.”

It is this fervent devotion to the festival that defines the life of Paucartambo and drives people to offer themselves as priostes and mayordomos, who are in charge of financially and logistically sponsoring the entire festival.

Each dance group opens the door of their meeting hall to anyone who wishes to enter. At lunch and dinner time, every single person will be given a plate of food, often prepared by the dancers themselves. After the rituals of the day are over, the doors open again, and participants are welcomed to a party with live music and free-flowing alcohol.

The prioste and the mayordomos are responsible not only for feeding thousands of people, but for the successful completion of the festival. The prioste takes care of the entire festival, paying for the musicians that accompany the Virgin in her processions, and for providing food and drink at the central house, or cargo mayor. They also have to take care of the Virgin for the entire year.

Why would anyone, especially anyone from a small Andean town, offer to pay an exorbitant amount of money so thousands of others could have a good time? Gisela Canepa Koch explains in her investigation, Masks, Transformation, and Identity in the Andes: The Festival of the Virgin of Carmen, Paucartambo-Cuzco, that the prioste’s responsibility is immense, since the Virgin’s blessing for the next year depends on her satisfaction with the festival. By sponsoring the festival, they not only show their devotion to the Virgin, they also consolidate a position of authority by guaranteeing the future of the town.

The prioste and the mayordomos spend their entire year collecting funds and donations from people around town, organizing the festival, and taking care of the Virgin. Like the dancers, their life revolves around and is defined by the four fateful days in the middle of the winter.

In Buenos Aires, Queer Tango Takes a Revolutionary Dance Back to Its Roots

Party like it's the end of the world.
festivals

They're either scaring away Old Man Winter or the Ottoman Empire.
roadside attractions

8:22
Want to see fewer ads? Become a Member.
From Around the Web
Atlas Obscura Trips
Peru: Machu Picchu and the Last Incan Bridges
View This Trip
Thanks for sharing!