The Story Behind the Most Bizarre Strike Photo Ever Taken - Atlas Obscura
Want to see fewer ads? Become a Member. 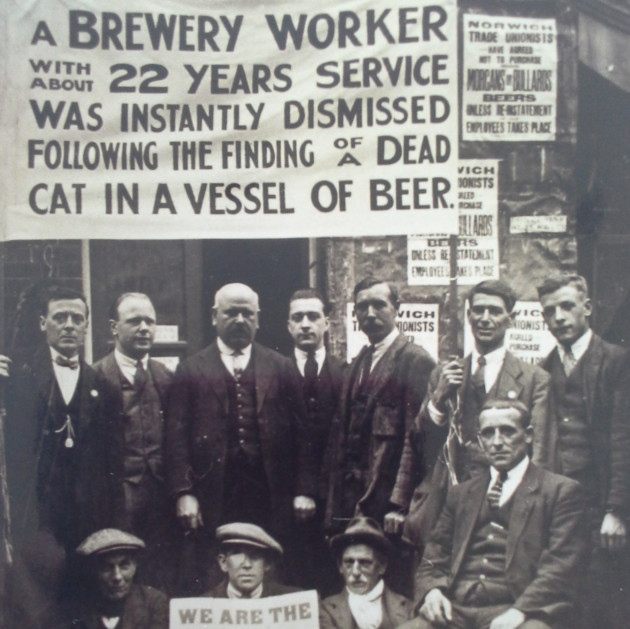 Striking brewery workers protesting the unfair firing of a coworker. Public Domain, via the Eastern Daily Press
In This Story
Destination Guide

Since the advent of the Industrial Revolution, strikes have played an important role in the relationship between labor and capital across the world. Frequently, striking workers use slogans, posters, and t-shirts to convey the motivation for their actions and garner support from fellow laborers, the media, and the larger community. While phrases like “Part Time America Doesn’t Work” are certainly memorable, Derek James of the Eastern Daily Press in the U.K. may have found the most eye-catching strike slogan of all.

Yes, the sign in the picture above reads: “A Brewery Worker with about 22 Years Service Was Instantly Dismissed Following the Finding of a Dead Cat in a Vessel of Beer.”

The mysterious photograph, which appears to be from the 1920s, implies a strike action protesting the firing of unionized brewery workers. Behind the men, posters reading “Norwich Trade Unionists have agreed not to purchase Morgans or Bullards beers unless re-instatement of employees takes place” cover the walls of a building.

Like any good journalist, James’ curiosity was piqued by the photo, and he put out a call in the newspaper for any information about the photograph —and, more importantly, the story behind it. Fortunately for all of us, Victor Crowe, a 90-year-old resident of Norwich, England, saw James’ plea and reached out to share what he knows.

Crowe’s father Albert, a World War I veteran, was employed at Bullard & Sons Anchor Brewery when the “dead cat strike” occurred — he’s the man with the eyepatch in the center of the bottom row. “I remember him telling me about the walk-out which resulted in the worker being reinstated,” Crowe told the Eastern Daily Press.

Crowe also confirmed that cats were present in the brewery, explaining, “They were brewery cats to kill the rats trying to get into the sacks containing the malt.”

So it’s certainly possible one of the cats fell victim to a tragic workplace accident, but why was the man who uncovered the tragedy/quality control issue dismissed?

Unfortunately, further details are scarce. While Bullard & Sons was one of the “big four” breweries in Norwich, a search of digital newspaper archives from the 1920s didn’t uncover any stories about the strike. However, information regarding other strikes at the brewery was available, so it’s probably safe to assume that the workers were willing to strike to protect their interests—or, in this case, protest the unfair firing of a colleague.

Perhaps the strike was too brief to merit media coverage—after all, it’s doubtful the bosses at Bullards & Sons were interested in word of dead cats in their beer spreading.

Albert Crowe, at least, faced no retaliatory action for the strike; he continued working at the brewery until it closed in 1961, then went on to work as a controller for a local taxi service. If nothing else, the rediscovery of the strike photo was a pleasant surprise for his son. “It was lovely to see the photo of my dad. It brought back many memories,” he said.

Look at These 7 Baby Lynxes and Their Mom

You deserve it!
animals

An Enormous, Four-Foot Wildcat Has Been Spotted in a Scottish Forest

It's been nicknamed "the Clashindarroch Beast."
31 days of halloween