The Tiny Kentucky Town That Eclipse Fans Are Obsessing Over - Atlas Obscura
Want to see fewer ads? Become a Member. 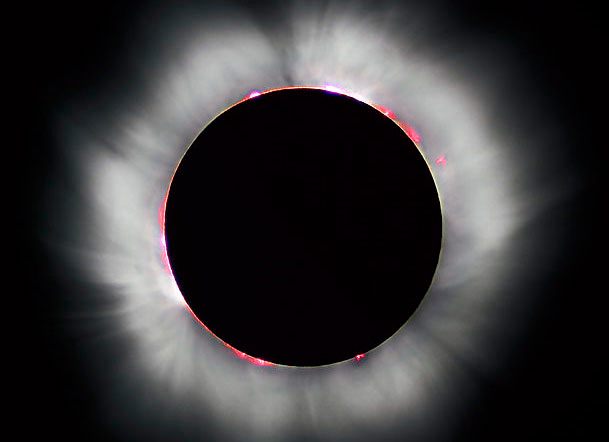 The total solar eclipse of 1999, in France. Luc Viatour/www.Lucnix.be/cropped/CC BY-SA 3.0

Go ahead. Try to book a hotel room online in Hopkinsville, Kentucky, for the third weekend in August next summer.

You can’t. The rooms appear to be booked solid from August 19th through August 22th. And the same goes for hotels and motels in nearby Cadiz, Hardin, Oak Grove, or any other interchange along Interstate 24. Demand is so high that you have to personally call to make a reservation, and be willing to pay between $400 to $800 a night.

You could say the stars have aligned for Hopkinsville. Or, more precisely, the Earth, sun and moon will be perfected aligned. Next summer will be the first time a total solar eclipse—when the moon completely blocks out the sun—can be witnessed in the continental United States since 1979. (Viewers could view a total solar eclipse in Hawaii in 1991.) And in a cosmic twist of fate, on August 21, 2017, Hopkinsville will be the star around which the astronomical world orbits. As the moon crosses the United States at about 2,000 miles per hour, casting its shadow from Portland, Oregon, to Charleston, South Carolina, Hopkinsville (population 33,000) has been identified as the “greatest eclipse” location.

What does that mean? Well, it’s technical. It boils down to that as the moon makes its run across the country that night (the phenomenon has been dubbed The Great American Eclipse), when it passes Hopkinsville it will be the closest to the Earth. The area will be plunged into midday darkness for about two minutes and forty seconds. (Note: there is already a sort of heavenly body battle brewing with Carbondale, Illinois, which can claim the “longest duration” eclipse; it will be about two tenths of a second longer than in Hopkinsville.)

What greatest eclipse really means for Hopkinsville is that tens of thousands of astronomy buffs and other curious onlookers are expected to descend on this western Kentucky community, and only the ones with deep pockets are going to have dibs on a room at the Holiday Inn.

Dr. Richard Gelderman, the director of the Hardin Planetarium at Western Kentucky University in nearby Bowling Green, understands the attraction of experiencing a total solar eclipse—earlier this year, on a NASA grant, he went to Indonesia to witness one first hand.

Map of the moon’s trajectory across the USA in 2017. Wolfgang Strickling/CC BY-SA 2.5

“A total eclipse is a complete and total change. A total eclipse is something that should not happen, and your body knows it. And everything in your body totally sends off chemical alarms saying, ‘Beep, beep, beep. Something is wrong here, because in the middle of the day, the sun just disappeared,’ he said. “And the most common expression when you look at videos of people experiencing a total solar eclipse is ‘holy shit.’”

The Visit Hopkinsville office, the area’s convention and visitors bureau which oversees tourism in the region, has known about the celestial occurrence for almost a decade, and not because they had somebody checking moon charts on staff. Nine years ago Cheryl Cook, the Visit Hopkinsville executive director, received an email from a prudent vacation planner and avid eclipse chaser - somebody who has devoted their lives to experiencing astronomical events - inquiring about hotels and the best viewing spots.

A composite image showing a progression of the 2008 solar eclipse in Russia. Kalan/CC BY 3.0

Since that time, Cook and other city officials and business leaders have become ad hoc astronomers to promote Hopkinsville as the optimal place to experience the Great American Eclipse and to prepare for the throng of visitors. Along with securing lots of public viewing areas, they’ve been stockpiling eclipse essentials, such as folding lawn chairs and official total solar eclipse viewing glasses.

In a strange coincidence, August 21,the day of the 2017 eclipse, carries a lot of significance for Hopkinsville. That’s the day, in 1955, that a local farmhouse in nearby Kelly received an alleged visit from a band of extraterrestrials and a fierce gunfight ensued. Local police and military police from nearby Fort Campbell investigated, and the incident received considerable coverage from the national press.

The community now celebrates the event annually with the “Little Green Men Days” festival. Next year’s four-day spectacular will be capped off with a total solar eclipse, and probably considerable UFO conspiracy theories.

“I like to say the aliens were here to pick out their viewing site early,” Cook joked.

Given the volume of expected travellers, Cook hopes some visitors plan to come early to ease traffic congestion and to enjoy all the area has to offer, such as the official Hopkinsville Summer Salute Festival or an area distillery—one has already planned a special eclipse edition of their moonshine, which will certainly come in handy if the weather turns cloudy on August 21.

“If you can’t see the eclipse, you can have some eclipse moonshine and it’ll make your sky go dark too,” Cook said.

Update 11/11: We have updated the story to reflect that some rooms are still available for booking by telephone, but not online.

How '1-Up' Went From Pinball to Gamer Speak

How Edmond Halley Kicked Off the Golden Age of Eclipse Mapping

Starting in the 18th century, eclipse maps brought the celestial phenomenon down to Earth.
astronomy

And looking far across the universe.
astronomy

It is hard to predict an eclipse when you think the world is flat.
astronomy

For generations, women have been critical to bringing order to the chaos of the solar system.
Want to see fewer ads? Become a Member.
From Around the Web
THE GASTRO OBSCURA BOOK
Taste the World!
An eye-opening journey through the history, culture, and places of the culinary world. Order Now