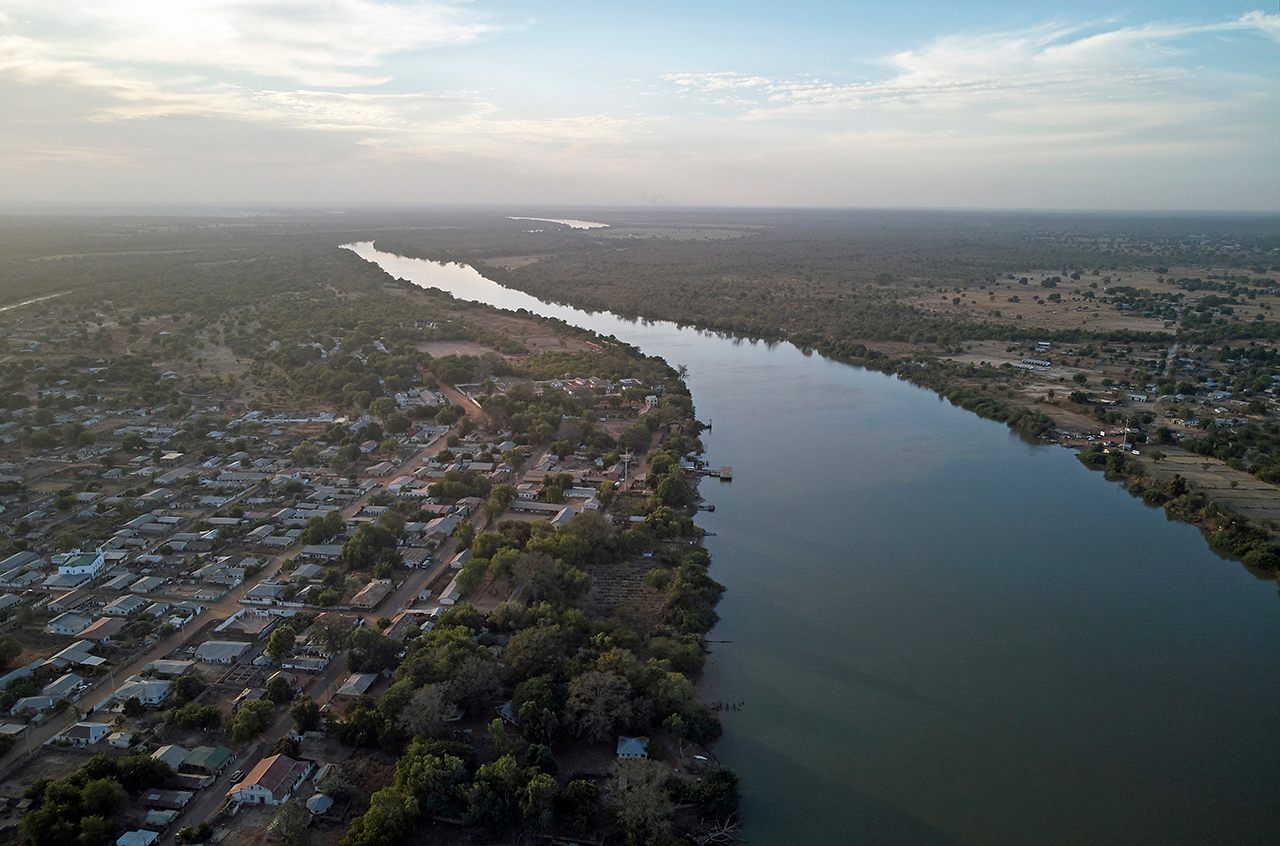 The Gambia River at Janjanbureh, in the eastern part of the country. Dennis Jacobsen / Shutterstock
In This Story
Destination Guide

The Gambia, the tiniest country on the African mainland, is shaped unlike any other nation in the world. It is long and skinny, just 30 miles across at its widest points. It looks like someone tried to stick a finger into Senegal, which surrounds The Gambia on three sides. The only bit of the country that doesn’t border Senegal is its very short coastline.

Senegal has long had an interest in The Gambia—and has intervened in the country’s politics before—for obvious reasons; the fastest way to reach the southern part of Senegal from the north is to drive through The Gambia. As a geographical arrangement, it makes so little sense that the obvious question to ask is: Why does it exist?

There’s an apocryphal story, rooted in the colonial history of West Africa, that accounts for The Gambia’s unusual shape and location. Through the 18th and 19th centuries, French and British colonialists were vying for power and resources in this region, which was an economic center for the slave trade, among other industries. The British were also interested in finding an easy route inland, to Timbuktu and its fabled riches.

There are only a few rivers on the coast of West Africa that run from the desert to the coast, and the French controlled the mouth of the more northerly one, the Senegal River. The Gambia River, farther south, where the British had more control, runs parallel, and, as the story goes, a British warship simply navigated up the river, shooting cannonballs off either side and claiming the land that fell within cannon range. The result: A river-shaped country made up solely of the strips of land on either side of the water.

As bizarre and improbable as this story seems, there are nuggets of truth to it: The British did claim rights to the Gambia River, and the country’s strange shape emerged from conflict between the two colonizing powers. There may even have been cannonballs involved.

The first European power to lay some claim to the Gambia River was Portugal. The country’s modern name comes from the Portuguese word cambio, or “trade.” The British first started traveling to the river in the late 16th century. Throughout the 17th century, British, Dutch, and French trading companies were all trying to establish a presence on what’s now the coast of Senegal and The Gambia, sometimes clashing with each other over the control of islands at the riverine mouths. The Gambia River and the islands at its mouth were important for Britain to control, strategically, as they were the empire’s main outpost in the area, and a connection to its settlements and trading posts along the Gold Coast, in Sierra Leone and Ghana.

The amount of land that any of these colonial powers physically controlled, though, was very small, usually just an island that allowed them to travel and trade farther inland, and store goods headed back to Europe. Even if Britain controlled the Gambia River, it didn’t control most of the land on either side, outside of a few small settlements and, after 1826, a one-mile strip of land on the northern bank, ceded by the king who ruled the area.

But in the 19th century, France changed its strategy and started trying control more inland area, moving from its more northern settlements south towards the Gambia River. In 1888, in order to establish a formal claim to its Gambian outposts, Britain made The Gambia a protectorate. Since the French did recognize the British claim to control of the river and its area, the two colonial superpowers opened negotiations about where exactly the boundary between the two would lie. An early negotiation put the boundary at six miles north and south of the river and east to Yarbutenda, the farthest navigable point on the river.

That was supposed to just be a starting point, with a joint Anglo-French Boundary Commission then dispatched to map the actual border. But when the commission arrived in 1891, it encountered resistance from local rulers, whose land was being divvied up, sometimes right through the middle of an existing kingdom. The Boundary Commission had backup, though, from British ships patrolling the river.

At one point, men and guns from three warships landed on the riverbanks “as a hint of what the resisters had to expect in the event of any continued resistance,” according to The Gambia Colony and Protectorate: An Official Handbook, first published in 1906. Another account, though, says that the British ships bombarded the town Kansala in order to intimidate the resistors. It’s possible that, in this more conventional way, cannonballs were key to establishing the border.

There’s no evidence that the British ever fired cannonballs off the sides of their ships to establish The Gambia in the middle of French territory. But it’s not a bad shorthand for what actually did happen: two colonial powers using force to divide up part of a world according to a bizarre logic of colonial power, only marginally concerned with the people who would have to live there.

A place where when people moved out, lions moved in.
museums

These 72 images are a rare glimpse of an ancient city lost to time and conflict.
islands

A surprise discovery from Haiti may finally reveal how some famous feral horses got to a distant barrier island.
Video • AO Docs