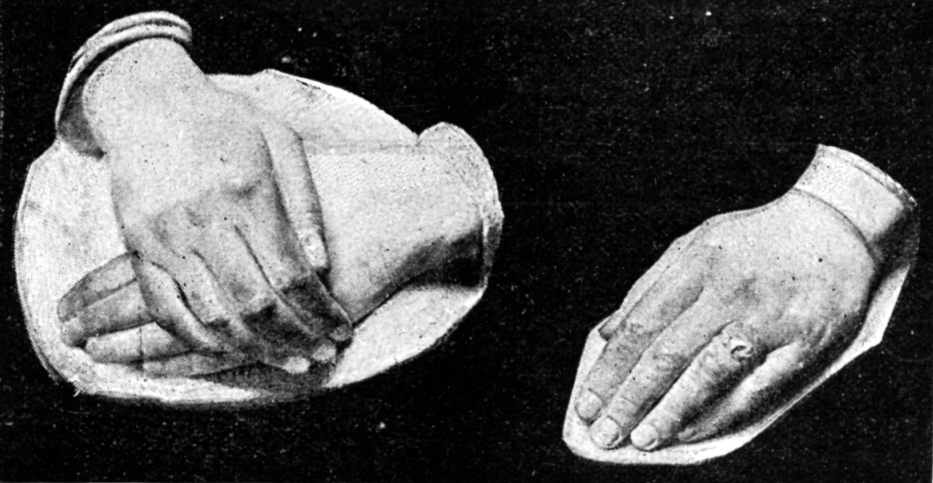 Casts of the hands of Princess Beatrice and Princess Louise, as part of a feature about hands in an 1893 edition of The Strand Magazine. Internet Archive/Public Domain

In its backward glance at the 1870s, Edith Wharton’s The Age of Innocence (1920) treats readers to a peculiar spectacle on the occasion of an engagement. As the young bride-to-be, May Welland, presents her left hand—recently sapphire ring-bejeweled by her fiancé, Newland Archer—to her socialite grandmother,  the grandmother seems more interested in her appendages than the jewels.

“But it’s the hand that sets off the ring, isn’t it, my dear Mr. Archer?” she says. “Mine was modeled in Rome by the great Ferrigiani. You should have May’s done, my child. Her hand is large—it’s these modern sports that spread the joints—but the skin is white. And when’s the wedding to be?” she broke off, fixing her eyes on the soon-to-be groom’s face.

The vignette’s curiosity reveals much about the Victorians’ conviction that hands contain meaning. They represent idealizations and expectations of gender, worthy of immortalization in sculpture; they serve as an index of social anxieties, synecdocichally drawing attention to unruly bodies and desires; they emblematize socioeconomic status, showcasing the trappings of wealth and the hardship of poverty. In fact, the fashion of the age —both popular and “scientific”—contended that cheirosophy or chiromancy—practices we now playfully, even derisively, call “palm reading”—could reveal an individual’s character and life trajectory.

Popular magazines at the time, The Strand included, also tried their hand at arguing for the appendage’s intrinsic significance with a two-part exposé by Beckles Willson that argues, “The hand, like the face, is indicative or representative of character.” The author follows up his self-assured assertion with what amounts, delightfully, to pin-up shots of famous hands accompanied by the author’s frequently laudatory evaluations of their respective merits. Willson’s enthusiasm uncovers a cultural predilection for objectifying hands that had enjoyed popularity for several decades by the time his article appeared; and while it remains fashionable even today to suggest otherwise, it proves quite difficult to deny that the Victorians were, in fact, not at all averse to getting handsy.

The Victorians’ flamboyantly flaunted their finger fetish in the glassware mass-produced for their newly fashioned and notoriously extravagant dining habits; human hands—in myriad forms—became motifs that could teach, terrify, and/or titillate. In the case of the “Tree of Life” pattern created by the Hobbs Brockunier Glass Co. of Wheeling, West Virginia, anyone seeking cream and sugar for hot beverages faced being forced into fondling miniature hands, sparking frisson as users contemplated a socially sanctioned, though somehow still oddly illicit (and vaguely creepy) frottage culminating with a splash of cream.

Additional “handy” examples from the pattern include compotes, cake stands, and an epergne, that invited diners to admire, though not necessarily touch, disembodied hands balancing pronouncedly phallic shapes.

Other tableware from the period, including James Hadley’s iconic sculpture-turned-spill vase “Mrs. Hadley’s Hand,”(circa 1864) produced by Royal Worcester in Worcester, England, and redecorated by other artists like Eduard Bejot, invited gazers to engage with the grasping—even gripping—potential of the female hand. While Bejot’s tarted-up version screams privilege with all its paste jewels, Hadley’s original evinces turquoise-braceleted middle-class style.

This lust for the clutching female hand expanded considerably from Hadley’s form to include flowers, cornucopias, torches, seashells, even corn on the cob. Each form sports jewelry—rings and bracelets—and manages to look altogether more alluring than Thing ever could hope to.

Whereas the fine porcelain of Royal Worcester proved prohibitively expensive to the average consumer, chalkware and pressed glass examples were inexpensive—but eye-catchingly expressive—alternatives to objectify the female form.

As the 19th century progressed, these tantalizing hands re-formed as they endeavored to evoke moralistic messages by reminding butter-seekers, for example, of time-worn adages, whose symbolism may have harbored a caveat about entertaining notions and seeking out other lither, more comely hands.

Not all disembodied hands objectified the feminine to titillate diners; others conveyed messages about social justice and the obligations of privilege, though with no less of a tactile treat, perhaps, for those receptive to the charms of the male hand. One example, Vallerysthal’s “Beggar’s Hand” toothpick holder, stylishly nudges dinner guests to consider the less fortunate as they clear the debris of overindulgence from their teeth.

Dinner guests encountered a similarly charged message when their hosts served up sugar in O’Hara Glass Co.’s “Pennsylvania Hand,” that features a fist clenching a scroll or bar.

Because most glass manufacturers of the period failed to maintain detailed records, it proves exceptionally difficult at this remove to establish the intended meaning of this particular motif absolutely. However, the clenched fist – whether it sports a bar or a scroll – has been a recurring anti-slavery, pro-freedom, even pro-black, motif. It may also have a connection to President Abraham Lincoln, whose modeled hands enjoyed a certain brand of fame in the mid-19th century. While it is possible, of course, that none of these possibilities capture the designer’s meaning, these masculine hands clearly convey strength all while objectifying them for dinner guests to caress.

In other cases, and perhaps more delightfully because of their absurd appearance on a single piece in an entire line, men’s hands make an appearance to thrust forth a creamer’s handle, affording yet another hand-holding opportunity at the dinner table.

Ever more suggestive, perhaps, were those hands inviting users to put them to whatever use they might conceive—nefarious or otherwise—as they stretched out to be filled.

A hand-shaped tray holding buttons, one of which also features a bodiless hand. Joshua Adair

The tray itself doubtlessly found endless uses, including safekeeping calling cards, jewelry, and other trinkets like buttons, even those featuring bodiless hands of their own.

Regardless of what they stored—or their received meaning—it does not require a palm reader to pronounce that the expressive and tactile potential of myriad unattached mitts held them in sensual thrall. They also illustrate beautifully, if eerily, that the Victorians were indeed a handful—in the best ways possible.

When Tomatoes Were Blamed For Witchcraft and Werewolves

Lizards Are Evolving in Response to Fierce Hurricane Seasons

They need to get a grip.
medieval

They were the medieval version of a highlighter.
colleges

The Legal Kerfuffle After a Sorority's Secret Handshake Was Revealed Online