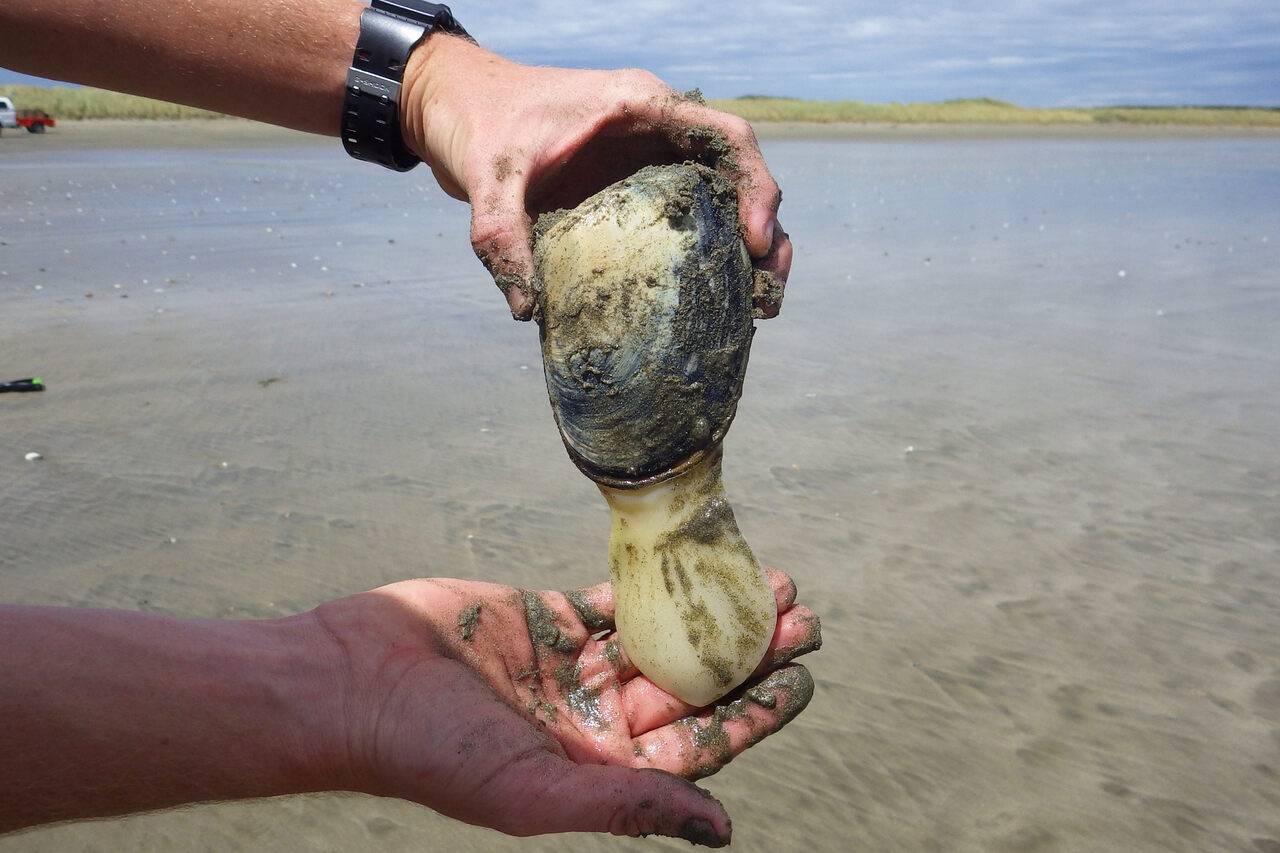 A toheroa,showing off why its name means "long-tongue" in the Māori language. Emma-Louise Crawford/zoom-ology.com
In This Story
Food

People talk about toheroa like they’re a dream, because these days, they are. The big, delicious surf clams were once plentiful on New Zealand shorelines, before populations suffered a mysterious, catastrophic crash in the second half of the 20th century. Those old enough to have seen the last-ever toheroa season are full of memories.

Toheroa bury themselves in the sand using their fleshy tongues, which can approach the size of a human’s. They were fast enough, Raglan’s Tracey Cooper remembers, that by the time you’d spotted their two tell-tale siphon holes on the low-tide sand flats, it was nearly too late to dig for them.

“They might be a foot deep but by the time you’ve dug that deep, they’re even deeper,” he says. Their elusive strength was immortalized in a popular children’s song recorded in 1979—the peppy Toheroa Twist.

Auckland’s Phillipa Crews remembers digging toheroa with her grandmother on Himatangi Beach, a black-sand stretch on the west coast of the North Island. “I was hardly ever fast enough and usually only found pipi [a smaller shellfish],” she says. “If I found a toheroa I was really proud of myself.”

If you were quick, you could pluck the heavy shells—huge, the size of your hand—from their sandy tombs, their creamy white tongues pulsing. Traditional Māori flax bags, or kete, were ideal for harvesting; the sand and water drained right through. Then you’d crack the strong hinge, eat the greenish flesh raw on the beach, or boil them, throw them in a hāngī (a traditional Māori ground oven) or driftwood fire, perhaps sprinkling them with vinegar before eating. Or you’d leave them in a bucket of water overnight so they spat out all their sand, then steam them open, mince them, and turn them into fritters to gobble with soft, fresh, white bread and butter.

Found mostly on west and south-facing New Zealand surf beaches, toheroa (Paphies ventricosa) remain both a traditional food staple and taonga, or treasure, for the Māori. But they became an everyman’s luxury in the early-20th century. Rich, sweet, gamey, yet creamy, the flavor was fine enough to also appeal to the epicurean. A 1936 issue of the New Zealand Railways Magazine described them as “now firmly established as a delicacy highly esteemed by the most fastidious gourmet.”

Pale green toheroa soup was also a specialty, described as “like clam chowder, but better,” according to a 1925 advertisement in the Auckland Star. One vintage recipe book lists toheroa soup under “Native Delicacies.” It required a dozen toheroa minced, simmered with onion, water or stock, milk, cinnamon, flour, and parsley.

“People having convenient access to beaches where this much-flavoured shellfish is plentiful are fortunate indeed,” the author wrote. Plentiful might be putting it lightly. Toheroa beds were once so rich as to be considered practically inexhaustible, with numbers so numerous that they could be harvested with a horse and plough.

New Zealand has admittedly not given much to the culinary world, with the exception of pavlova, golden kiwifruit, dairy, and lamb. But toheroa became known worldwide and shipped abroad as canned whole shellfish and, later, canned soup. Toheroa canning began in the 1890s, and soon several factories sprang up to process them. Their popularity was helped along by the future Edward VIII’s brief visit to New Zealand in 1920. He tasted toheroa soup at a dinner party and, in a startling break with royal protocol, reportedly asked for a second helping.

The event was reported throughout the Empire, and toheroa took off, featuring on hotel menus across the nation. It was “a gift of nature which is a remarkable commercial asset, and although a mere shellfish, has done much to advertise the Dominion all over the world,” the Railways article boasted.

But its immense popularity soon began to cause friction between Māori, Pākehā (New Zealanders of European descent), and harvesters. It became fashionable for urban Pākehā to go to the beach to collect toheroa, and the gathering grounds became culturally contested areas. Scenes such as one in 1966, when an estimated 12,000 cars and 50,000 people visited one beach in a single weekend and gathered an estimated one million toheroa, weren’t uncommon. One image from the 1960s shows cars stacked along an Auckland beach, the low-tide line busy with bent bodies digging, digging, digging.

They’re nearly all gone now. The harvesting seasons, the canneries, the soup, the recipes. Commercial harvest stopped by 1969, and regional recreational fisheries closed between 1971 and 1980. Some toheroa are still around, but it’s forbidden to take them. Māori retain customary take, largely for hui (meetings) or tangi (funerals); providing toheroa to visitors is an important component of manaakitanga, or generosity and hospitality. They can also grant permits for particular occasions.

But if the fishery has been closed for that long, why haven’t the toheroa returned? There should be plenty of large, mature shellfish by now, but they’ve failed to thrive. A review paper published in the New Zealand Journal of Marine and Freshwater Research in 2017 outlines some of the main suspects for factors preventing recovery, though it points out that there is a surprising lack of knowledge around their biology and ecology.

The list of potential causes is long. The lack of recovery could be down to a reduction of freshwater streams running onto beaches to the sea; toheroa need these to cool off and as a source of nutrients. According to Māori lore, the streams may also be important in their breeding cycle, along with native dune grasses as nurseries. Silt could be choking the toheroa, and excess nutrients or chemical runoff from land could be affecting them as well. Driving on beaches, which many Kiwis consider their God-given right, causes shell-crushing and exposure to birds.

Overall, the reasons for toheroa’s failure to recover are still largely uncertain. The authors of the review article point out that similar patterns have been observed in other large, long-lived, and tasty surf clams worldwide. Everywhere, systemic poaching and unregulated over-collecting remain serious problems.

New Zealand has faced fishery collapses before, most notably of scallops. But while toheroa may be largely gone, they shouldn’t be forgotten. They should be a cautionary tale, illustrating the destructive effects of rampant culinary enthusiasm, ignorance of how land use affects the ocean, overwhelming commercial interest, and pure greed—all of which run roughshod over the Māori tikanga, or cultural practices, that traditionally protect food sources from extinction.

Perhaps the toheroa’s demise is best summed up by my uncle, who, when I asked for historic experiences with toheroa on my Facebook page, responded: “Used to access forbidden beds via an uncle’s farm up north and recall playing cat and mouse with toheroa patrols in the dunes,” he wrote, before adding, “Canning destroyed them, not me.”

How a standoff with Castro knocked a hole in the shrimping village of Thunderbolt.
food

The Regional Chinese Cuisine Linked to an Ancient Assassin

A king died after being served up a murderous fish in present-day Suzhou.
food

On this stretch of coast, fish unpredictably flock ashore, providing a windfall of seafood.
List

Eat your Big Mac in a DC-3.
Christchurch, New Zealand

Come for the bait, stay for the brioche.
Springfield, New Zealand

A giant doughnut was gifted to the small New Zealand town of Springfield to promote "The Simpsons Movie."
Want to see fewer ads? Become a Member.
From Around the Web
Related

The seasonal delicacy was discarded for decades.
Read more
Thanks for sharing!