Why Are Farmers in Senegal Creating Gardens That Look Like Crop Circles? - Atlas Obscura
Want to see fewer ads? Become a Member. 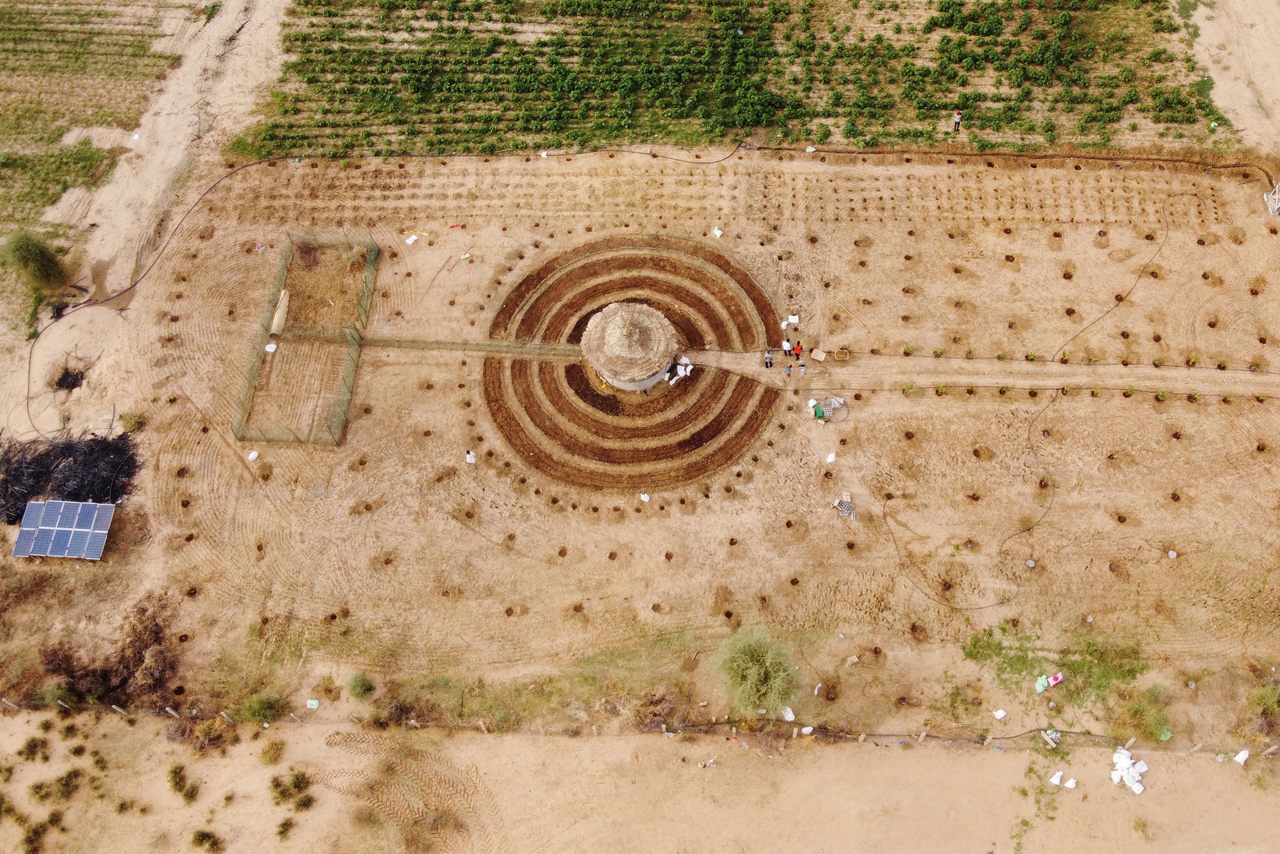 An aerial view of a newly built tolou keur garden in Boki Diawe, within the Great Green Wall area, in Matam region, Senegal. REUTERS/Zohra Bensemra
In This Story
Destination Guide

From the air, the new garden in the town of Boki Diawe, in northeast Senegal, looks like an eye: wide open, unblinking, and flanked by a smattering of divots dug in the surrounding soil, dark like freckles across a nose. The ground is still sandy brown, but nearby, there is a fringe of bright green.

If all goes according to plan, this garden will soon look similarly lush. The circular garden—known locally as a tolou keur—has recently been planted with papayas, cashews, lemons, and more. One of the inner curving rows is dedicated to medicinal plants, while the outer row has been lined with baobabs and Khaya senegalensis, whose wood is also known as African mahogany.

The garden is the latest iteration of the project known as The Great Green Wall, first envisioned as a viridescent belt squiggling thousands of miles across the Sahel region, from Senegal to Djibouti. Launched in 2007 by the African Union with backing from the European Union, World Bank, and the United Nations, the project was initially meant to help stave off desertification by stymying the Sahara as it wandered south.

Desertification is the process through which lusher land degrades into a desert. The phenomenon is nudged along by “an interplay of natural and human factors,” says Chukwuma J. Okolie, a lecturer in surveying and geoinformatics at the University of Lagos in Nigeria. Okolie uses remote sensing data, such as satellite imagery, to track landscapes tilting toward desert conditions.

The drivers of desertification include climate variability and climate change, overgrazing, the construction of river dams, and conflicts that displace people and spur shifts in land use. Long droughts can leave fertile soil vulnerable, and winds and rains can whisk it away. “Deforestation can accelerate the process, because trees serve as windbreaks,” Okolie says. That’s where the Great Green Wall concept came in.

The initial plan emphasized trees as an anchor for soil and a buffer against the encroaching sand. Some elements of the idea made sense, says Geert Sterk, a geoscientist at Utrecht University who studies land degradation. “Tree and shrub roots hold soil, [and] the canopies trap raindrops before reaching the soil surface and reduce strong winds,” curbing erosion by wind and the region’s relatively rare but fierce rain, Sterk explained in an email.

But the ambitious plan hasn’t really panned out. There were political squabbles about where the green line should be drawn, and scientific debates about what fuels desertification, as well as the efficacy of the approach. As of 2021, the project is just a fraction of the way towards its goal of planting hundreds of millions of acres.

A new infusion of money, pledged earlier this year by various governments and development banks, will give the project a boost—and now, the focus is shifting to more local gardens. Over the past seven months, more than 20 versions of these circular gardens have sprouted across Senegal.

Aly Ndiaye, a Senegal-born agricultural engineer who helped design the tolou keur, told Reuters that the Great Green Wall ought to be made up of smaller, productive gardens that are “permanent, useful, and sequential,” a series of practical plots rather than an unbroken line of trees. Okolie agrees that the project can’t be about shoving any seedling in the ground. He says it must entail “trying to locate the best species that can thrive” in the given soil conditions and climate, while also appealing to the people who will nourish them. Researchers have found that agroforestry projects often fail when the focus is solely on tree-planting and locals are left out of the process. “When the government plants trees, it’s the community people who will sustain them” Okolie says. “The community has to take ownership.”

Sterk also believes that, instead of a wall of foliage, “it is much better to integrate the vegetation in the farming systems throughout the entire Sahelian zone.” Letting famers lead the way—such as by tending shrubs and trees birthed from roots, seeds, and stumps in a practice known as farmer-managed natural regeneration—“is a much better approach,” Sterk adds. Leveraging local agricultural practices is also key. In Burkina Faso, for instance, farmers speckle still-empty fields with shallow pits known as zai that trap rain and can soak future roots. They also spread manure in order to encourage termites to tunnel through and aerate the soil. (Researchers have found that the insects’ work can also boost nutrients and provide other benefits that improve crop yields.) Incorporating practices like these into future gardens can honor indigenous knowledge about the best ways to work in local conditions.

Reuters reported that the circular tolou keur is also designed to hold on to water—a precious commodity in thirsty landscapes. Some of the plots have already struggled with irrigation issues. But if the gardens take off, the local landscape could eventually be greener, for good.

For Centuries, England's Go-To Apple Utensil Was a Sheep Bone

Once gardens, then a garbage dump, then back to gardens.
horticulture

The world’s largest array of greenhouses has transformed the region economically, and in other, unforeseen ways.
science

Farmers and foragers set up at sunset to sell hundreds of species valued in traditional medicine and ritual.
trees

Which trees will live and which ones will die?
Video • PinDrop