A Photographer’s Journey Through the Heart of UFO Country - Atlas Obscura
Want to see fewer ads? Become a Member. 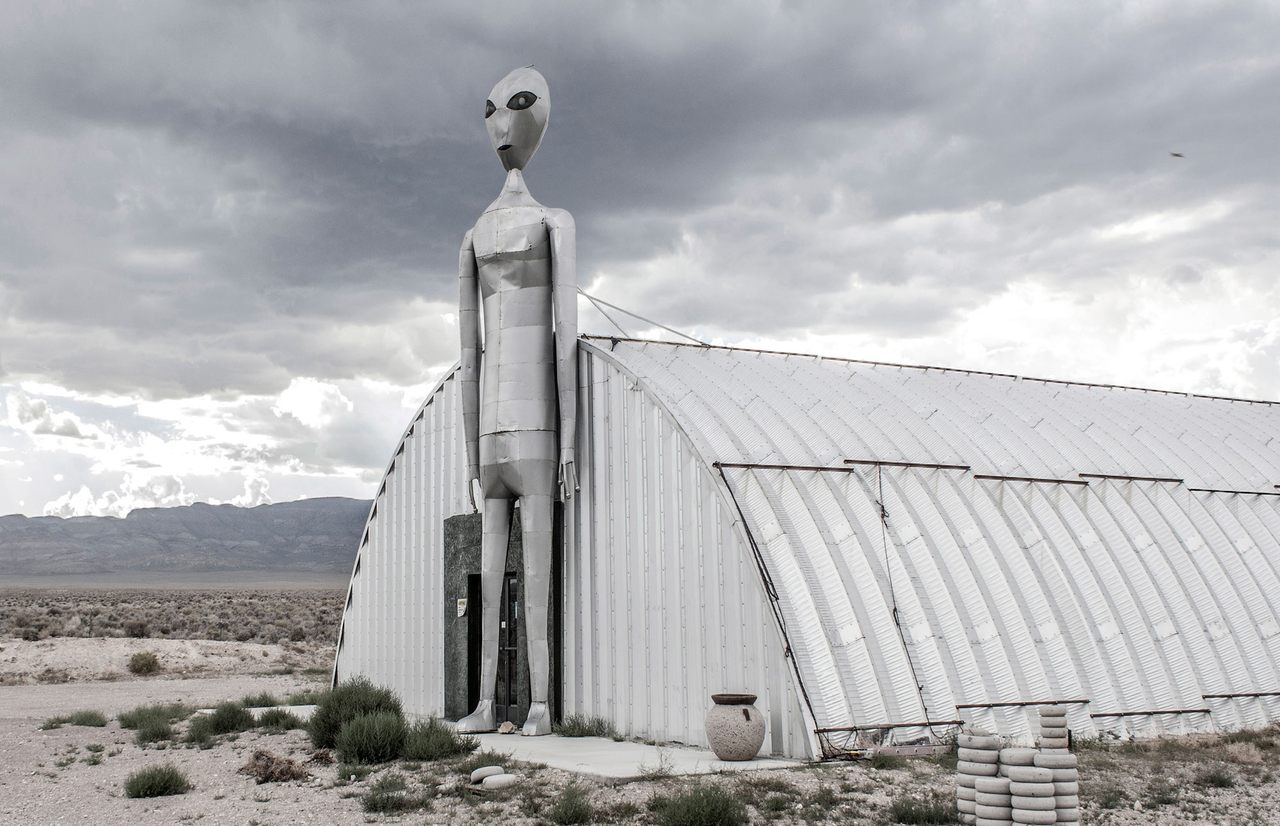 On the Extraterrestrial Highway, Nevada. All photos by Javier Arcenillas

State Route 375 is a barren stretch of Nevada highway that runs near the top-secret U.S. Air Force installation commonly known as Area 51—a facility believed to be used for experimental aircraft testing, with a busy side hustle spawning theories about aliens, UFOs, and extraterrestrial technology. Rachel, a town on the highway with a population of just 54, manages to do brisk business, too. The Little A’Le’Inn there, according to one of its managers, feeds thousands of (human) visitors a year along what has become known as the Extraterrestrial Highway. The mythology surrounding secret government programs and alleged alien crash sites has created a landscape unlike any other, studded with landmarks and roadside attractions that have become part of the lore of the desert.

“[UFO sightings] have transformed cities and roads, turning the legend into part of everyday life,” says Javier Arcenillas, a Spanish photographer who documented UFO culture and sighting locations in the American West for his new photo book, UFO Presences.

Places such as the Extraterrestrial Highway and Roswell, New Mexico, about 1,000 miles to the east, have become beacons to an entire community. Roswell, according to a representative for the city, averages 226,000 visitors each year—and embraces its place in the mythos, despite the fact that it is easy to see the whole thing as a joke.

“Ridicule is pockmarked throughout the entire phenomenon,” says Greg Eghigian, a historian at Penn State University and author of multiple research papers on the history of UFO sightings and alien contact. But he sees a deeper meaning in the way people connect with these sites. “What I consistently see across the board generally are people who are trying to find meaning,” he adds. “I think human beings are essentially meaning-makers and one of the ways, in fact, maybe the key way we often do that, is through stories. Stories bring meaning to our lives.

“The desert is this place that, because it’s so empty, because there are so few people around … you can write something about your own life or about the meaning of bigger, more cosmic kinds of things,” he adds. Against that backdrop, he explains, people have created landmarks and elevated the locations of sightings to provide them with spaces to focus their energies. Ultimately, they’re grappling with some big existential questions in the otherwise stark desert landscape.

For his part, Arcenillas is “not a believer, but certainly, yes very comfortable [with the possibility]. I can not be alone in the universe, right?”

Atlas Obscura has a selection of photos of out-of-this-world sites from Arcenillas’s upcoming book.

It all started with the Gold Rush.
Sponsored by Travel Nevada
landmarks weekconspiracy theoriesufosaliensvisual

It all started with the Gold Rush.
Sponsored by Travel Nevada
Destination Guide

A Night and a Day in Tonopah, Nevada

An adventure through Nevada's historic mining town, featuring the world-famous Clown Motel, a miner's graveyard, and a forest of cars.
Sponsored by Travel Nevada
trees

The world's oldest living trees have been growing in Nevada for more than 5,000 years.
Sponsored by Travel Nevada
Video