How to Kill a Zombie Fire - Atlas Obscura
Want to see fewer ads? Become a Member. 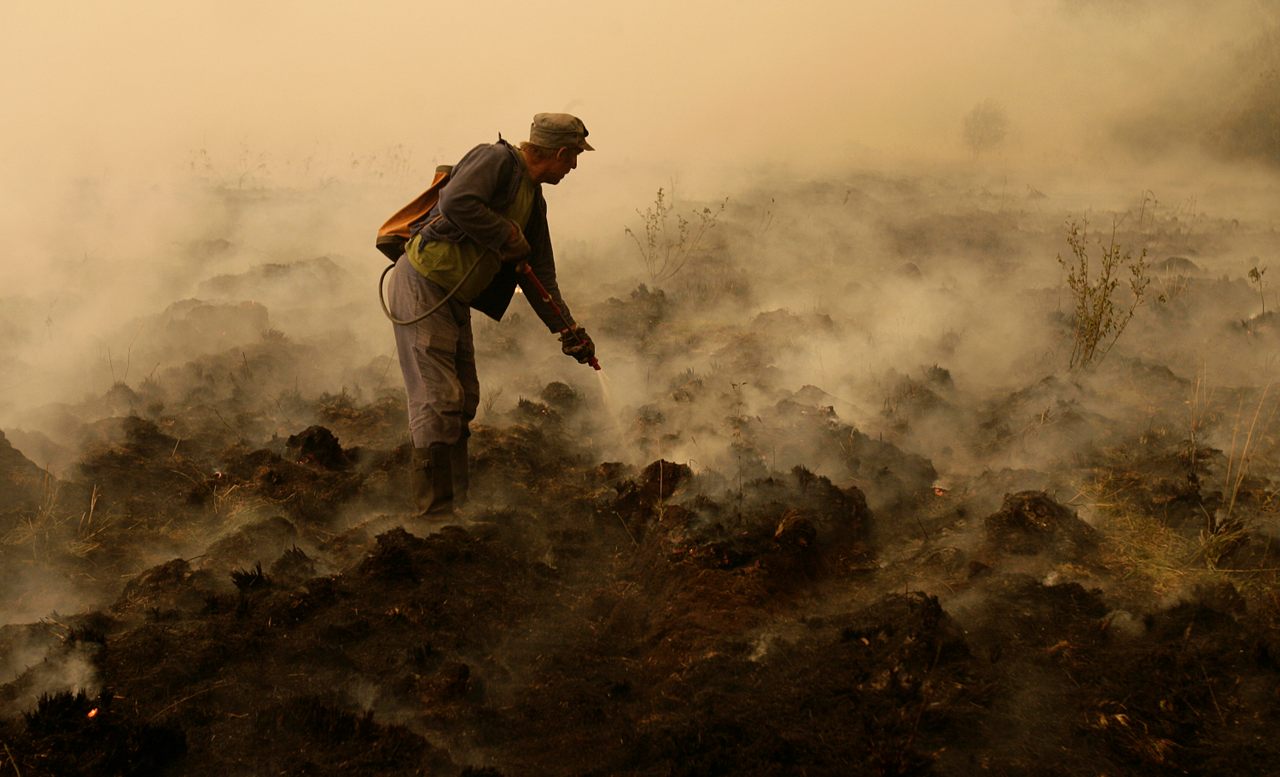 Crews worked to defeat a peat fire outside Moscow in 2010. ARTYOM KOROTAYEV/AFP via Getty Images)

This story originally appeared in Wired and is reproduced here as part of our Climate Desk collaboration.

Humanity’s got a full-tilt zombie outbreak on its hands. As the world warms and certain regions—particularly the Arctic—dry, so does the super fuel known as peat. It’s basically concentrated carbon from dead plants, and it burns not at all like your typical Californian or Australian wildfire. Instead of sending towering flames upward, a peat fire burns in the opposite direction, smoldering deep in the soil. Firefighters often soak the ground with water and declare victory, only for the soil to reignite a surface fire months later. The land might even snow over while the smoldering persists undetected. That’s why scientists dub these menaces “zombie fires.”

Peat fires can release 100 times the carbon that a wildfire does. That’s terrible for both the planet and human health: In Indonesia, which has massive stores of peat that regularly burn uncontrolled, the smoke creates public health crises. Since peat fire spreads down into the soil and across the landscape, they also threaten nearby farmlands and people.

Yet researchers have found a weapon that could help put down a zombie fire for good—the equivalent of destroying its brain instead of just mangling its body. “Smoldering is the most persistent type of combustion on earth, because it’s really easy to start and very difficult to stop,” says Imperial College London engineer Guillermo Rein, co-author of a new paper describing the work in the International Journal of Wildland Fire. “They call them zombie fires, but the equivalent would be like an army of zombies. They are very, very difficult to suppress.”

Just ask the firefighters who battled North Carolina’s Evans Road Fire in 2008, which simmered through swampy peatland. Engineers ended up pumping 7.5 billion liters of water from lakes to flood the area. It took seven months to drown the fire.

If you’ve got a big air tanker that can drop huge amounts of water on a zombie fire, good for you. But it’s not going to work. “No one fights smoldering fires, which are massive, with air tankers,” says Rein. “If they do, they’re doing PR. They’re telling everyone, ‘Don’t worry, we have it!’ But they don’t. They don’t. When I see these airplanes in a smoldering fire, I know they are completely desperate.”

That’s because deluging a zombie isn’t guaranteed to quickly kill it. Say you’re pumping massive quantities across a peatland like firefighters did in North Carolina. That doesn’t mean the water is getting to the right places as it trickles underground. “It creates a channel, and the fire in that channel is suppressed, but then the water doesn’t go anywhere else,” Rein says. Other parts of the fire can fester untouched. And so the zombie lives on.

If firefighters don’t have enough water at their disposal, they may try compacting the soil with heavy machinery in a bid to cut off the fire’s oxygen. But that equipment is not always available to a crew. Even then, such a maneuver is dangerous work since it requires driving over an active fire. Also, these fires can be huge, and heavy machinery can cover only so much ground.

In the lab, Rein and his colleagues experimented with a novel anti-zombie weapon: water mixed with a nontoxic, readily available fire-extinguishing surfactant, also known as a wetting agent or suppressant. “It’s a little bit actually like soap—it just reduces the surface tension of the water and allows the water to penetrate better into a porous medium,” says Rein. “Peat is a porous medium.”

Using a small custom-built “peat reactor,” stuffed with the plant material and lined with ceramic insulators, they could set a zombie fire and monitor it as it burned. Above the box they situated a nozzle to spray either regular water or their special blend on different fires. Compared to the same amount of plain water, the water with surfactant cut the time needed to extinguish the blaze by 40 percent. Thanks to that decreased surface tension, instead of creating channels, the mixture more uniformly penetrated the soil, so little patches of zombie fire had nowhere to hide.

It wasn’t that the surfactant had some sort of chemical effect on the fire—for instance, by decreasing oxygen levels. Instead it was more of a thermal effect, “in the sense that the surfactant allows the water to reach more hot spots and reach them faster,” says Rein.

That’s promising because the less time a peat fire has to burn, the less land it will destroy and the fewer emissions it will spew. “If we have the ability to suppress these peat fires, that will help mitigate not only ground-level smoke pollution impacts but also the potential feedback with climate change where these deep, very prolonged, smoldering peat fires emit tons and tons of ancient carbon back into the atmosphere,” says Sophie Wilkinson, a wildfire scientist at McMaster University who studies peat fires but wasn’t involved in this new work.

For now, researchers have demonstrated the effect in the lab, but the next step is to try it on a controlled outdoor burn. Combined with the researchers’ previous work modeling how peat fires spread, the discovery could give firefighters a powerful weapon for putting down zombie fires. The team can build “what if” scenarios for, say, fighting fires burning in Indonesia, and offer advice on how to distribute resources when quashing a particular fire.

“There is no positive outcome of peat burning,” says Rein. “Now we have an understanding of how to suppress them.”

A wildlife ecologist specializing in large carnivores unfolds a mystery for listeners.
objects of intrigue

Examining whether a ruler slipped through the cracks of a tumultuous century.
Video • Wonder From Home