Does it Even Matter if These Vintage Vampire-Killing Kits Are Real? - Atlas Obscura
Want to see fewer ads? Become a Member. 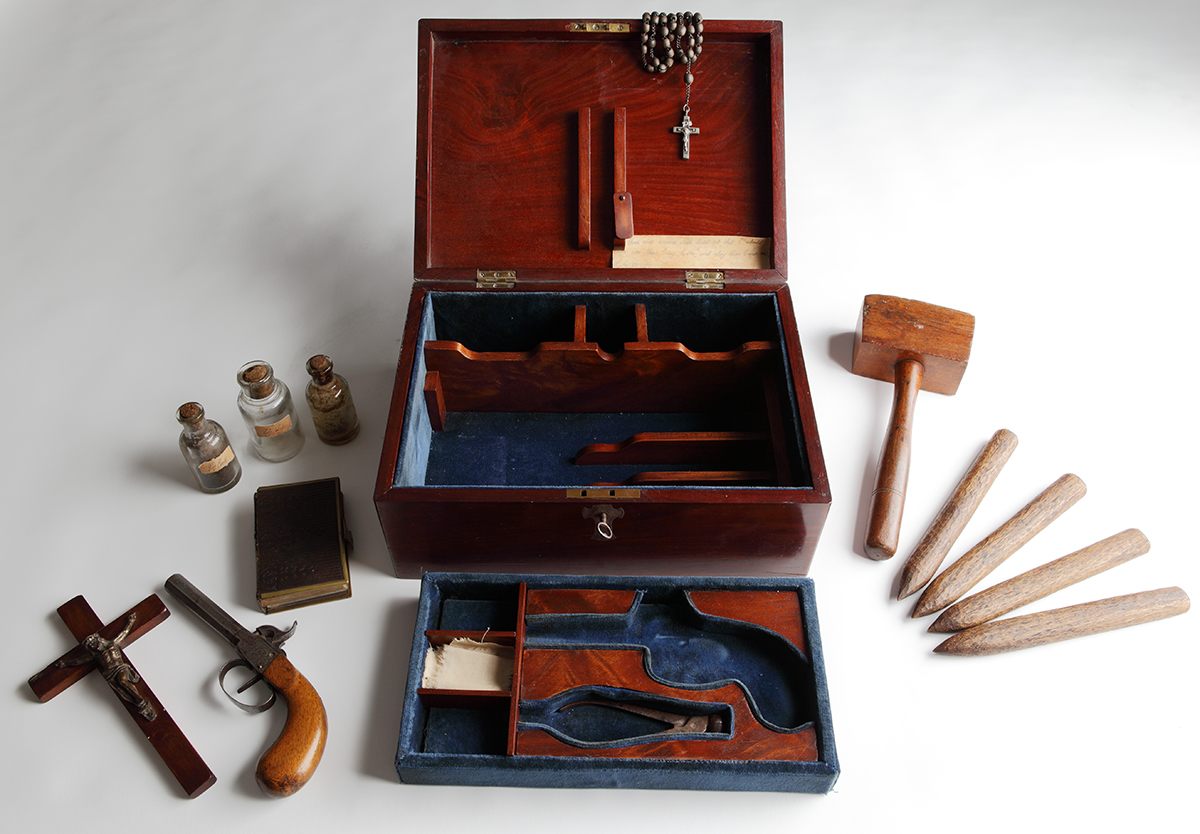 A vampire-killing kit from the Royal Armouries in Leeds, not quite as vintage as some might think. Item XII.11811 © Royal Armouries
In This Story
Place

One of three sites in England that house the National Collection of Arms and Armour.
Place

Eccentric concrete mansion and museum designed and built by hand from the inside out.

Around 1970, when movies and TV series starring Dracula helped revive interest in Eastern Europe’s ancient bloodthirsty undead, dealers started catering to the burgeoning market for antiques related to vampires. Worn wooden boxes full of tarnished weapons, said to kill or at least gross out vampires, surfaced widely at auctions. They were said to have been assembled centuries ago as portable equipment to protect travelers. Prices soon reached tens of thousands of dollars each for the vampire-killing kits, which are typically fitted with pistols, wooden stakes, Bibles, crucifixes and rosaries, plus bottles of garlic powder, holy water and herbal potions.

Dozens of the kits have found their way into museum collections. Visitors flock to see them. Nobody seems to mind that academics have pored through archives and conducted scientific tests and now believe that many of the kits floating around are simply late-20th-century novelties.

Despite the in-depth articles and museum labels explaining the objects’ origins, “belief is stronger than objective evidence,” the British weaponry expert Jonathan Ferguson says. He is the curator of firearms at the Royal Armouries in Leeds, which owns a vampire-killing kit that he describes as “inspired by the movies, not Victorian stories and folklore.” The museum acquired it in 2012, knowing that it was probably cobbled together in the 1970s or ‘80s.

The mahogany box, partly lined in velvet, contains a pistol, bullet mold, and prayer book that are antiques, dating to the 1850s. The rest—bottles with cryptic labels, a handwritten psalm quote about slaying enemies, banged-up wooden stakes—can be considered handsome Halloween kitsch.

Keeping these invented artifacts on view nonetheless has scholarly value, Ferguson says; they represent the public’s enduring gothic fascination with “supernatural creatures and the means to defeat them.”

Another set surfaced in the 1980s as a donation to the Mercer Museum in Doylestown, Pennsylvania. On its leather case’s yellowed paper label, the supposed German manufacturer, a professor named Ernst Blomberg, lists its contents including “silver bullets,” a supply of his “new serum” and a gun made by the Belgian gunsmith Nicholas Plomdeur. The label boasts that the kit will help ward off Eastern Europe’s rash of “a particular manifestation of evil known as Vampires.”

Ferguson has concluded that in the 1970s, a British antiques dealer with a vivid hematological imagination dreamed up the Blomberg-Plomdeur fable to make some pedestrian guns in his inventory more valuable. On the Mercer’s kit, a team of researchers found a variety of scientific red flags: the adhesives are modern, Plomdeur’s “silver” bullets are pewter, and Blomberg’s paper labels could only have been printed after 1945. Still, some mysteries remain. No one knows what lurks inside the glass vials; no one wants to damage the waxy seals to investigate the serum ingredients.

Sleuths who specialize in debunking vampire legends, including Anthony Hogg, have posted detailed denunciations of the kits. Sometimes the wooden multi-compartment cases are obvious fakes, adapted from antique desks or boxes originally used for tools, guns, pens, cosmetics, jewelry, or musical instruments. Sometimes the bullets tucked inside would not actually fit into the barrels of the accompanying guns attributed to Plomdeur. Some anti-vampire potions come in bottles with modern screw-top lids, and the stakes and mallets were clearly made of turned wood recycled from furniture legs.

In 2004, Sotheby’s sold a Blomberg kit for $26,400, although the catalog cautioned that “Neither the existence of Professor Blomberg nor that of the gunmaker Plomdeur can be confirmed. Also open to question is whether these kits were ever employed successfully in the killing of vampires.” In 2011, an unsigned vampire-killing kit, with 32 components including a map of Transylvania and no less than two crucifixes, brought $25,000 at Sotheby’s. For a Blomberg kit that came up at Sotheby’s in 2012 and sold for $13,750, the catalog described it as “Continental, circa 1900 and later” and had no comment on whether the makers were fictional.

David Walker, the head of the auction house’s 19th-century furniture department in New York, says he remains skeptical of stories that travelers ever used the kits for self-protection. He describes the material as “very theatrical” as well as “rather elaborate and quite whimsical,” and he adds that they generate conversation when they’re on view and media attention whenever they come up for sale.

Cory Amsler, a vice president at the Mercer Museum, says their kit has boosted attendance for decades. It serves as a spooky prop during Halloween programs, and it has been used as a serious educational tool, to explain centuries of woeful misconceptions about the causes of wasting diseases. Some visitors have brought in their own supposedly antique heirloom kits, to compare to the display. All these assemblages of vampire repellents based on late-20th-century pop culture, Amsler says, “take on their own narratives going forward. People continue to make their own stories that get passed down.”

From Dracula’s Indian inspiration to just how long it would take these mythical bloodsuckers to annihilate humanity.
objects of intrigue

The 149-year-old specimen is one of millions at Britain's Natural History Museum.
Video • Object of Intrigue