One of the Most Famous Victorian Dishes Is a Hilarious Lie - Gastro Obscura
Want to see fewer ads? Become a Member. 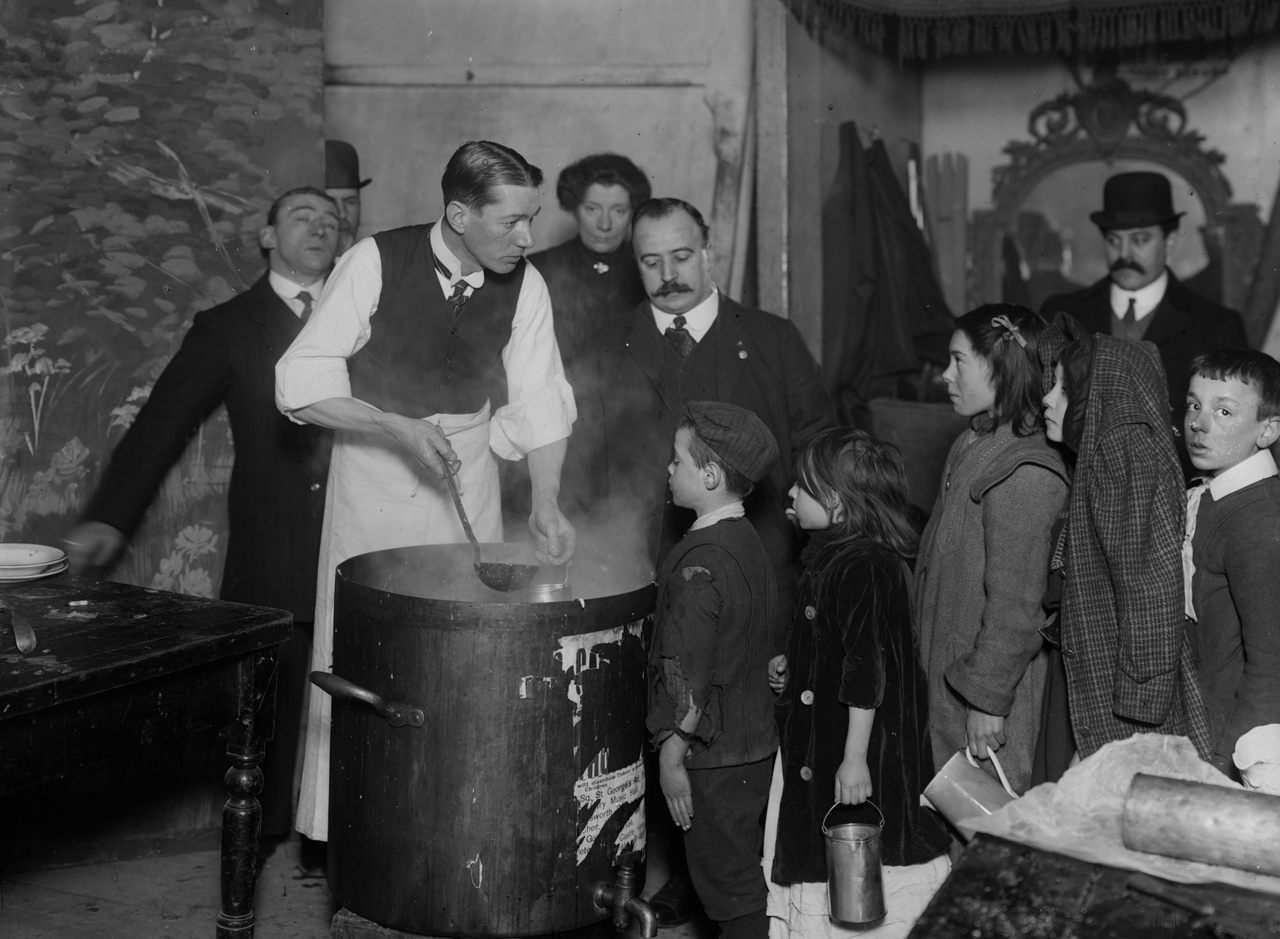 Children lining up for soup at the Canterbury Music Hall in 1910. Topical Press Agency/Getty Images
In This Story
Destination Guide

“Good heavens! Issue umbrellas, the Scots are firing porridge!” exclaims Neddie Seagoon, a character voiced by comedian Harry Secombe on the popular 1950s British radio program The Goon Show. The English military forces have just been hit with a “great steaming spludge” and aren’t having it.

Appalled by the Scottish tactics and gastronomic habits, Seagoon prepares a savage retaliation: “If the Scots want to make it a war on nutrition, we have an English dish in our armoury twice as deficient in calories as porridge and… twice as deadly.”

Brown Windsor soup was the butt of many a joke on The Goon Show. Sludgy, stodgy, and devoid of discernable texture or flavor, it was a recurring comic stand-in for everything dreadful about British cookery. Writer Terence Alan “Spike” Milligan, who was born to an Irish father, had no qualms about skewering all aspects of British culture, particularly its cuisine. In the 1956 episode “The Macreekie Rising of ‘74,” the Brits weaponize the soup by pouring it into “naughty cannonballs,” while in the 1957 episode “Emperor of the Universe,” Seagoon injects it into his subjects to transform them into Englishmen.

Brown Windsor soup’s fame extends far beyond the hijinks of The Goon Show. Cookbooks including The Daily Mail Modern British Cookbook typically describe the “thick meat soup” as a popular dish in Victorian times, with some recipe authors going so far as to call it “Queen Victoria’s favorite.” The dish is so synonymous with traditional Victorian-era gastronomy that recipes for it appear in The Unofficial Harry Potter Cookbook and The Unofficial Downton Abbey Cookbook. Characters dine on brown Windsor soup in a 1994 episode of Agatha Christie’s Poirot, just as they do in the 2021 television adaptation of Around the World in 80 Days.

There’s just one problem: Queen Victoria never heard of brown Windsor soup. As Annie Gray writes in The Greedy Queen: Eating with Victoria, “Brown Windsor soup, which is often cited as a favourite dish of the Queen, did not exist at all in the nineteenth century.”

“Everybody in England was brought up believing in brown Windsor soup,” says Glyn Hughes, author of The Lost Foods of England. “What is really, really strange is how deep this is into the British psyche. Walk up to anyone in the street and ask them about brown Windsor soup, and they’ll say that it was terrible and horrible but everybody ate it in the Victorian era.”

Hughes started his scholarly quest to document the origins of his national cuisine because, he says, “English food has a terrible reputation, which has been largely justified.” The project started with a few dishes—a spotted dick here, a Yorkshire pudding there—but evolved over the years into a collection of more than 3,700 entries, along with a trio of books. The loathsome gruel was one of the first items Hughs looked into, since he figured it would be a snap.

“I thought brown Windsor soup should be so easy, because it’s very, very famous,” Hughes says. “I thought I’d go to any one of the famous Victorian cookbooks and look it up. But there is no reference to it in any of them anywhere—nothing, nothing, nothing.” Mystified, he turned to the British Newspaper Archive, which contains a vast number of articles from the 1800s. Still nothing. Hughes even paid two researchers to go through a century’s worth of archives at the National Railway Museum, since many sources claimed that brown Windsor soup was once a staple of British rail travel. Given that rail companies tend to avoid serving scalding-hot soups on moving vehicles, that claim already seemed suspect. Sure enough, not a single railway company menu or recipe book featured the soup.

“There is absolutely no mention of brown Windsor soup in the Victorian series—nothing until the 1920s,” he says. “It’s really, really weird, this mass hallucination going on.”

At its core, brown Windsor soup is a pretty primitive dish. Present-day recipes by the likes of Jamie Oliver typically consist of a hearty brown stew with beef chuck or lamb. By some accounts, Madeira or sherry were present to liven things up—either incorporated in the soup itself or drunk alongside to make the whole mess palatable. Given the simple ingredient list, it’s plausible that 19th-century English diners ate comparable brown stews, even if they never referred to them by such a name.

Some of the confusion may have arisen from potage á la Windsor, invented by Charles Elmé Francatelli, head chef to Queen Victoria, and included in the 1846 edition of The Modern Cook. However, this particular dish, sometimes also known as calf’s foot á la Windsor, was a white soup made with cream, rice, and often calves’ feet. There was also vermicelli soup á la Windsor, a recipe for another white-brothed soup, this time with noodles, first published in 1834 and supposedly served to King George IV. Save for the word “Windsor,” neither dish bears any resemblance to the brown Windsor soup we know today.

Brown Windsor soup may not have existed, but brown Windsor soap most definitely did. Manufactured in Windsor, the soap was supposed to be a favorite hygiene product of Queen Victoria, Napoleon Bonaparte, and Winston Churchill, whose wife once ordered 78 pounds of the fragrant bars.

“So you have Windsor soup, which is completely white,” Hughes says, in reference to potage á la Windsor. “And at the same time you have brown Windsor soap. So the joke is you put the two together and you get something completely horrible.”

Brown Windsor soup is a prime example of life imitating art, a punchline turned into an actual dish. Once the reviled—but still largely fictional—soup became a fixture on The Goon Show, it burrowed its way into the national consciousness and stayed there. Its terrible reputation goes a long way to explaining why The Independent remarked, “Occasionally heard of, but never seen, this traditional soup is distinctly out of favour these days. I defy you to find it on a menu anywhere.”

Even though few Brits have ever actually spotted brown Windsor soup in the wild, many will staunchly defend its historic reputation. Hughes has spent years challenging the Victorian roots of brown Windsor soup—“I keep trying to correct the Wikipedia page, but I’ve given up”—and has faced considerable fury for his efforts.

“What I found particularly strange about the brown Windsor story is that people get really, really angry when you tell them that it wasn’t the famous Victorian soup,” Hughes says. Over the years, he says he’s received indignant emails from all sorts of readers, including a prominent British politician who swears he remembers eating brown Windsor soup on railroad journeys. “People don’t like it when you challenge their beliefs.”

Culinary myths are often surprisingly hard to dispel. The Singapore Sling existed well before The Raffles Hotel claimed to invent it, the legendary barman Jerry Thomas never came up with the Tom & Jerry, and Elvis liked blueberry preserves, not bananas, on his bacon sandwich. At some point, origin stories simply feel true, and in the case of a humble soup, too insignificant to question.

“It’s so small and unimportant, you don’t bother to investigate it,” Hughes says. “It makes you wonder: how many things do we believe that if we were to look into them, we’d find they were complete nonsense?”

Podcast: The Museum of Icelandic Sorcery and Witchcraft

Caffeinated soups and chewing the leaves were once the norm.
Video • Wonder From Home