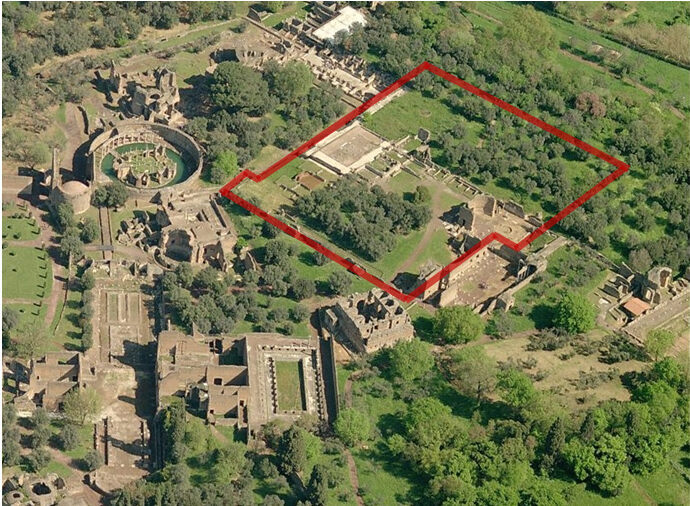 An aerial view of the villa and the area where researchers made the find. Courtesy of Villa Adriana and Villa d’Este
In This Story
Destination Guide

After two decades spent leading archaeological digs among the 1,900-year-old ruins of the former Roman emperor Hadrian’s sprawling Villa Adriana, Rafael Hidalgo Prieto thought he’d seen it all. Then the Spanish professor and his team discovered an imperial breakfast room unlike anything in the world.

The palazzo area once featured a royal four-bedroom complex centered by a semicircular nymphaeum with a private dining area suspended over a pool of flowing water. Vaulted ceilings with niches for sculptures overlooked a marble triclinium—that is, a sumptuous Roman dining area where aristocrats enjoyed expensive food and drink while lying on u-shaped couches. The area was accessed by retractable wooden bridges and flanked by a wall that featured small waterfalls and a recessed fountain. The room was open on one side and looked out on a courtyard of ornamental gardens.

Here, archaeologists believe, Hadrian and his wife, Vibia Sabina, breakfasted in a lavish display of power: The raised platform was positioned to project their silhouettes through a pair of windows for members of the court to see, site director, Andrea Bruciati, told the Times of London. “The villa was a machine that served to represent the emperor’s divinity … [This would have been] a quasi-theatrical spectacle.”

Built 20 miles east of Rome, in what’s now Tivoli, between 118 and 138 A.D., the 300-acre compound was once one of the world’s most incredible palatial properties. The only thing like it, writes Mary Beard, the famed scholar of ancient Rome, was emperor Nero’s wildly lavish, 300-room “Golden House,” which stood in the center of Rome.

But unlike Nero, writes Beard, “Hadrian got away with this over-the-top architectural extravagance because it was out of town and out of sight.” (She also objects to the description of the find as a breakfast spot, noting that the Romans generally did not attribute as much cultural significance to the meal as many modern diners.)

Hadrian ruled from 117-138 A.D. and is considered one of the “Five Good Emperors” of Rome who presided over the empire’s peak. He was known for consolidating and unifying Rome’s vast lands and ushering in a golden age of peace and prosperity.

A lover of world art and architecture, Hadrian personally participated in the design of Villa Adriana, combining architectural elements observed while traveling through Italy, Greece, Egypt, Spain, Germany, North Africa and Asia Minor. His goal was to create an ideal city, in miniature.

Now a designated UNESCO world heritage site, the seven-square-mile villa comprised more than 30 buildings at the height of its grandeur and was bigger than the town of Pompeii. The complex contained an unrivaled array of art and furnishings, and buildings were connected by a landscape peppered with ornate fountains, pleasure gardens, pools, spas, nature shrines, sculptures, baths, and a recreation of the Nile River.

Prieto, the Spanish archaeology professor, described the discovery of the breakfast area—which had previously remained unexcavated due to funding issues and a focus on other areas of the massive estate—as a “bombshell” in the Spanish newspaper ABC. “In all the Roman world there is nothing like it,” Prieto said. “The emperor wanted to show things that would overwhelm the visitor, something that had not been seen anywhere else in the world and that exists only in Villa Adriana.”

The announcement of the new find came as Italy dialed back pandemic-related social distancing restrictions on cultural venues and museums in early February, and coincided with the historic villa’s reopening.

It was discovered on shards of pottery uncovered 20 years ago.
ruins

Some associate him with a real-life Asterix, though less successful in resisting the Romans.
ancient

These 3,000-year-old charred seeds are the oldest of their kind ever found in Ontario.
List