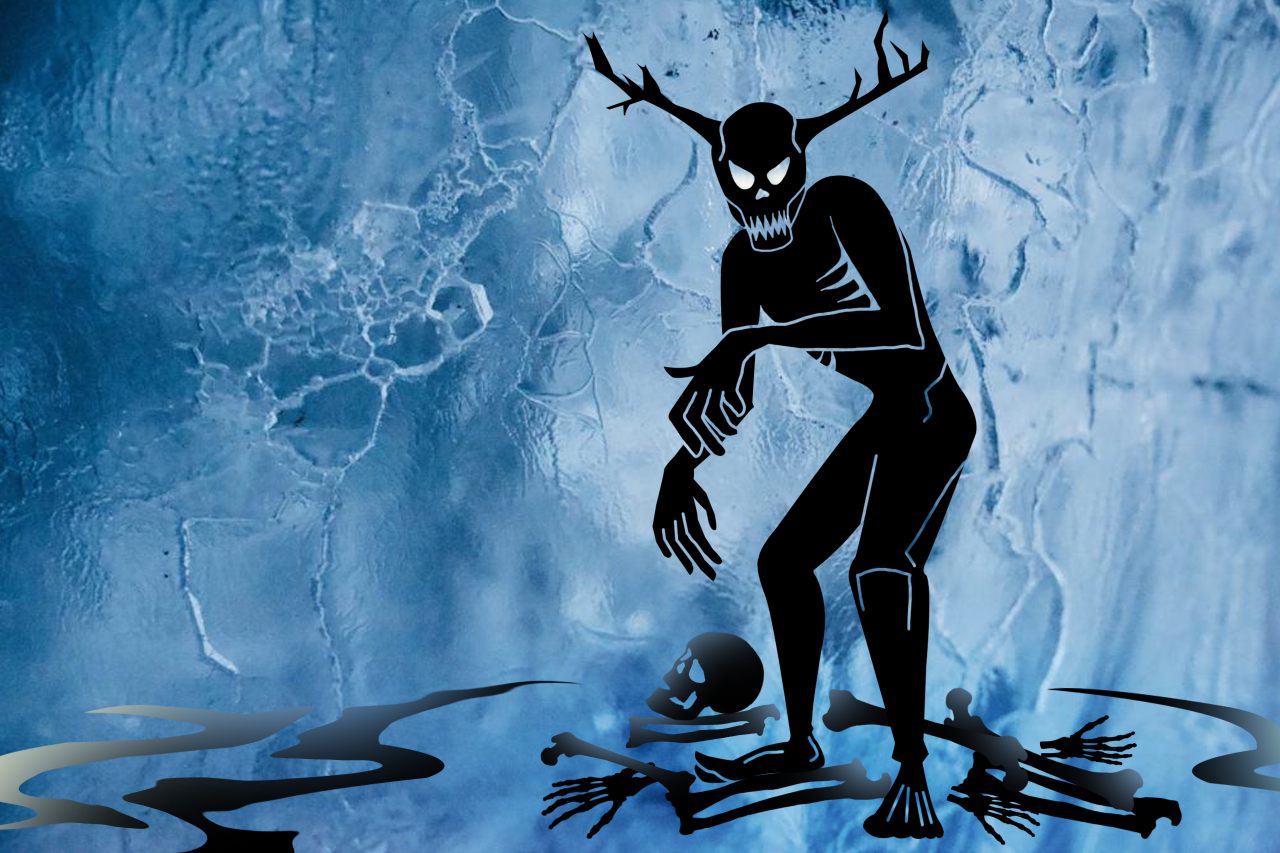 While details of its appearance vary over time and across geography, the Wendigo is always a symbol of hunger and desperation during the coldest season. And Winter is coming. Victoria Ellis for Atlas Obscura

The legend of the wendigo originated with the Algonquin in what is now Canada and the northern United States. And then settlers ran with it. And then everyone ran from it together.

The wendigo (also windigo, among other spellings) has metamorphosed over the centuries, splitting into three versions of the creature. All of its incarnations are frightening, though, because of what it represents fundamentally. It started out, according to the Ojibwe People’s Dictionary, as a “winter cannibal monster,” three of the most terrifying words in any language. This wendigo is a giant, soaring anywhere from 10 feet tall to higher than the pine trees of the northern forests. It’s described as humanlike, but emaciated, with a face blackened by frostbite and missing lips and cheeks because it chewed them off in its hunger for human flesh. Its diet is described succinctly by George M. Eberhart in his book Mysterious Creatures: A Guide to Cryptozoology: “Eats people, especially children.” The wendigo is a personification of the ice and hunger, cold and death, despondence and desperation that rime the winter wastelands of North America.

But it’s not just a metaphor for the ruthlessness of those climes. It’s a human monster, one whose dangerous greed and murderous inclinations can ruin a community in an environment where trust and working together are vital for survival. This version of the wendigo, an extension of the original tale, is the idea that anybody who puts their survival needs above others’ and eats human flesh (or is tempted to) can “go wendigo.” They are possessed by the spirit of the wendigo, their hearts and spines encased in ice so thick that you can hear it popping and cracking if you put your ear to their chest. The only cures for wendigoism are either to pour hot bear fat down the person’s throat to melt that ice—or to kill them.

In December 1897, the Saint Paul Globe of Minnesota reported that a Native American woman living in the Berens River Reserve of Manitoba had contracted typhoid fever, the effects of which caused her to act strangely. Her husband thought she was going wendigo, so he grabbed her by the hair and broke her neck. He was arrested for murder. But there are also cases of people going wendigo that are not mistaken diagnoses. The most infamous is the case of Swift Runner.

It was just after the winter of 1878 to 1879 in Alberta. A Cree man named Swift Runner, who was known and liked in town, returned from his winter camp without his family, behaving strangely. He said that they had died of starvation, even though he looked pretty hale for a man who had survived a winter that killed the other nine members of his family. The North West Mounted Police decided to check in on him. What they found was a camp strewn with human bones—some of them gnawed. Swift Runner confessed to what the academic world calls anthropophagy, and the rest of us call cannibalism.

He said he’d been having strange dreams, and that a spirit told him to eat his family, which included his wife, brother, mother, and six children (“Eats people, especially children”). He’d gone wendigo. It was a harsh winter, but it wasn’t an eat-your-family harsh winter. Swift Runner even admitted that he killed and ate one of his sons, the last of his family to die, so that there would be no witnesses to his crimes. Swift Runner was hanged for the ghastly murders in December 1879 at Fort Saskatchewan. The true motivation for his atrocities will never be fully parsed, but for a few decades in the 20th century, some psychiatrists diagnosed and treated “wendigo psychosis” as a culture-bound syndrome.

In modern times, pop culture has gentled the Wendigo into a winter spirit often depicted as either a humanoid deer with antlers or a ghostly creature with a deer or elk skull for a head— terrifying in its own way if witnessed on a snowy night in the woods. Meanwhile, states adjacent to Canada that also know the mental and physical burden of difficult winters annexed the wendigo to their own lore, most notably Minnesota and its neighbor Wisconsin, the latter of which has made inroads into making the claim official.

Stoughton, Wisconsin, is the home of a restaurant called Wendigo, which features a Cannibal Burger on its menu that’s stuffed with tenderloin and bacon. And every October, the town of Manitowoc has a Windigo Fest, a Halloween celebration with haunted attractions, a spooky parade, live music, and sideshows.

Minnesota hasn’t made those kinds of moves to embrace the wendigo, but it does have a strange natural anomaly called Lake Windigo. It’s a 199-acre lake in the middle of a star-shaped island in the middle of another lake called Cass Lake. That’s right: Lake Windigo is a lake within a lake.

In the late 20th century, a researcher named Carol Crawford Ryan gathered stories from locals about Lake Windigo, some of which seemed to go back hundreds of years. She heard that a wendigo is supposed to live in the icy waters of that inner lake. Bare footprints and exit holes from some large thing or things are found on the ice when the lake freezes over. She heard that the lake was used as a big kettle by a group of cannibal giants for boiling humans, and that a Native American chief had ventured to the island and never returned. That makes Windigo Lake a good place for a statue, I think. Or a historical marker. At least a warning sign. Either way, only time will tell which state, Minnesota or Wisconsin, will be the better claimant for one of the continent’s scariest creatures.

The source of storms and an (occasional) kidnapper, the massive ancient beast has inspired muscle cars and jet fighters.
mythology