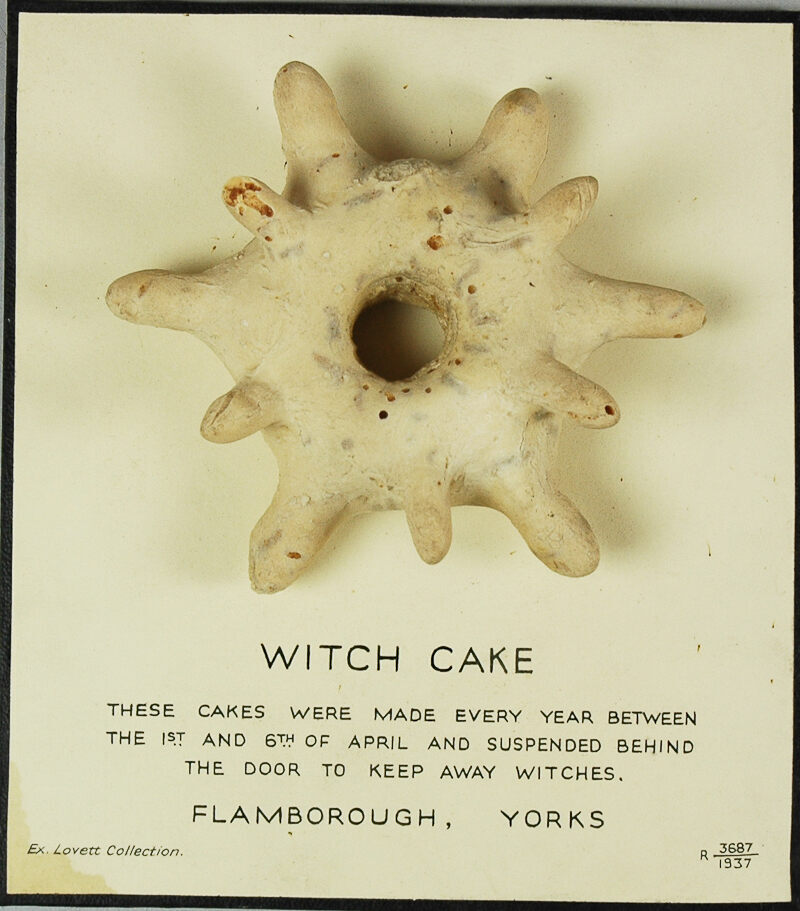 Depending on whom you ask, the Salem Witch Trials were the result of fear, confusion, psychological trauma, or possibly even a hallucinogenic fungus. But as the fervor was just beginning, the village reverend blamed another culprit: cake.

The origins of the tragic trials lay within Reverend Samuel Parris’s own home. In January 1692, his daughter, Betty, and his niece, Abigail Williams, claimed to be suffering from fits and feelings of being attacked by an invisible force. Thinking it the work of witchcraft, a local woman named Mary Sibley proposed countering the dark magic by baking a cake using flour and the girls’ urine, then feeding it to a dog. While the reverend and his wife were away, Sibley had the Parris’s enslaved servants, Tituba and John, make the cake and give it to the family pet.

When Parris found out, he was incensed. Not only did the cake fail to change the girls’ symptoms, more people came forward with claims of being bewitched. Also, some of the girls now accused Tituba, who merely carried out Mary Sibley’s orders, of witchcraft (Sibley was never accused). To Parris, it was the cake, more so than the girls’ symptoms, that unleashed evil upon Salem. In his sermon on March 27, 1692, he said, “Witchcraft was suspected” but hadn’t truly been confirmed “until Diabolical means was used by the making of a cake … since w’ch Apparitions have been plenty, & exceeding much mischief hath followed. But by this means [it seems] the Devil hath been raised amongst us, & his Rage is vehement & terrible.” Sibley repented before the congregation, but, to Parris, the damage was done.

What followed was a year of false accusations and hysteria that culminated in the executions of 20 innocent people. And yet, while the details of the Salem trials are well-known, this pivotal, “diabolical” cake has faded into obscurity. But Sibley’s suggestion wasn’t the unique idea of a lone, misguided woman; it was a traditional folk practice in 17th-century England and its American colonies.

Owen Davies, a historian specializing in the history of witchcraft and magic at the University of Hertfordshire, has found references to anti-witchcraft cakes dating back to the 1620s. They exist alongside other charms, such as hag stones and witch bottles. The latter were similar to the cakes, in that they also used a bewitched person’s urine, along with materials such as hair, iron nails, and bent pins.

The term “witch cakes” is more of a modern rebranding. They were mostly known as “urine cakes” or, if the writer was feeling fancy, a cake made with a person’s “water.” While a far cry from a delicious cake ingredient, urine was the crucial element in warding off witches. The belief in the cake’s efficacy was rooted in sympathetic magic: “Whoever the witch is, the belief is that there’s a sympathetic connection, an invisible connection, between that person and the bewitched person,” Davies says. Following this logic, the best way to break that connection was to take a physical representation of the bewitched (i.e., their urine) and manipulate it in some way.

To be clear, no one—save the occasional poor pet—was eating the results of the magic recipe. “Essentially, the cake was just a container for the urine,” Davies says. “If you just have a bit of urine splashed around, that’s not much use, is it? This way, you mix urine with a cake, then you’ve got the urine sealed in. So you can bury it. You can burn it. You can give it to something to eat.”

Fire was often the chosen method of destruction. A few years before pandemonium broke out in Salem, a doctor across the Atlantic prescribed a witch cake for a troubled boy in Yorkshire, England. A reverend’s diary describes a 1688 house call in which the doctor concluded that the boy “hath had some hurt by an evil tongue.” For that reason, he refused to “prescribe any medicine for him, until his water [has] been tryed by fire,—i.e., they must take his water and make a cake or loaf of it, with wheat meal and put some of his hair into it and horse-shoe stumps, and then put it in the fire.”

Davies notes that traditions and beliefs surrounding such charms varied considerably. Sometimes they were used to identify a witch: If you burned the cake, for instance, it might hurt the witch and force her to reveal herself. Other times they passed a curse on to a new victim (see: that long-suffering family dog). There are even records describing the cakes as weapons wielded by witches, rather than shields to protect against them. In these cases, the witches were said to hide cakes in a person’s house to curse them.

Due to this jumble of applications and traditions, witch cakes can be notoriously challenging for historians to study and draw conclusions from. They’re also a difficult subject because every witch cake seems to have been destroyed—except, maybe, two.

The only physical examples of witch cakes live at two British museums: the Pitt Rivers Museum and the Scarborough Museums Trust. We have no idea what Tituba and John’s 1692 cake looked like, but both museums’ cakes are the same unusual shape: a circle, with spikes protruding from its sides and a hole in its center.

“It looks like a spiky bagel. That’s more or less what it is,” says Jim Middleton, Scarborough’s collections manager. You could fall down a rabbit hole of potential symbolism—Is it a sun? A crown of thorns?—but Middleton says it’s all just speculation since there are no records describing the shape’s significance.

The Pitt Rivers’s and Scarborough’s cakes look similar for a reason: They were both collected by British folklorists during the early 1900s, from Flamborough and Bempton, two Yorkshire towns that are a mere three miles from each other. Scarborough’s cake was donated by collector William Clarke. The Pitt Rivers’s cake came from Edward Lovett, a folklorist so enamored of charms that he was known to wander London’s docks and accost fishermen from rural regions, asking if they had any talismans they’d be willing to part with for a price.

It’s this very enthusiasm that makes Middleton and Davies cautious about how they categorize the witch cakes at these museums. Both Lovett and Clarke were participants in the British Isles’ folklore revival movement—in the early 1900s, books such as James Frazer’s The Golden Bough and Andrew Lang’s Fairy Books series were reigniting interest in folk beliefs, music, and stories.

While the cakes are rooted in beliefs and traditions, modern historians think Clarke and Lovett could have easily been duped when it came to their particular cakes’ provenance and purpose. Middleton compares them to folk songs that were also collected during the folklore revival movement of the early 1900s. “How many of these ‘traditional songs’ that were gathered were just made up by the person who sang ’em after a few pints in the pub and told someone that it was a really old traditional song that was handed down from generation to generation?”

Lovett, for example, said Yorkshire residents used cakes like his as a protective device that they hung in their doorway and replaced every year during Holy Week. But Davies hasn’t found any evidence that this was actually a practice.

“The more distance you get from witchcraft and witches being a real fear and danger in communities, the more there’s a desire to make it a more romanticized bit of folklore,” he says. He suspects that the Pitt Rivers and Scarborough cakes were likely the work of an “enterprising baker in Yorkshire” who made and sold them to capitalize on the folklore revival movement.

But even though the two artifacts might just be spiky bagels, they are still connected to the history of charms in the Yorkshire area.

“It was at that time quite a remote place,” Middleton says of 1850s Flamborough, which is when Clarke said his witch cake was originally created. “The people who lived there were dependent on fishing and climbing down the huge cliffs there to collect seabirds’ eggs for food, both of which are really dangerous occupations … And these sorts of amulets tend to be associated with times of great struggle or particularly dangerous lines of work.”

By the turn of the century, however, Middleton thinks literal beliefs in witchcraft were fading away and such charms took on a more generic purpose. “It was probably more of just a general protective charm kind of thing. I’m not convinced that they actually believed that there were people going to fly in on broomsticks.”

With the rise of Wicca and modern witchcraft, we’re in the midst of another folklore revival. But Davies doesn’t expect a witch-cake comeback anytime soon. Even though he’s seen plenty of modern witches demonstrating how to use potions and charms on TikTok, “they’ve not caught on to the urine cake.”

When Sick Cattle Were Alleged Victims of Arrow-Wielding Elves

For centuries, farmers suspected their sick livestock had been "elf-shot."
objects of intrigue

Cornell's witchcraft collection has an original copy of the Malleus Maleficarum, an early witch-hunting handbook.
objects of intrigue

For Centuries, England's Go-To Apple Utensil Was a Sheep Bone

No dentures? No problem!
objects of intrigue

Opponents of Oliver Cromwell published his family recipes, with a side of fake news.
Video • PinDrop